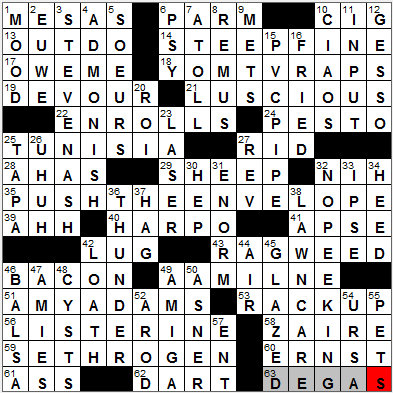 
Today’s Wiki-est, Amazonian Googlies
1. Navajo terrain : MESAS
“Mesa” is the Spanish for “table” and is of course is how we get the term “mesa” that describes a geographic feature.

The Navajo (also Navaho) Nation mainly live on a reservation in the Four Corners area of the US. It is the largest land area in the US assigned to a Native American jurisdiction, and occupies most of northeastern Arizona.

6. Chicken ___ : PARM
Parmigiana is a dish from southern Italy. The original parmigiana was made with an aubergine filling, with cheese and tomato layers and then baked. Versions originating outside of Italy have replaced the aubergine with breaded cutlets of chicken or veal.

24. Food item whose name means “pounded” : PESTO
Pesto gets its name from the Latin word for “crush”. The word “pestle”, as in mortar and pestle, is derived from the same Latin root.

25. “Patton” setting : TUNISIA
Tunisia is the most northerly country in Africa. The country takes its name from the capital city, Tunis.

“Patton” is an excellent biographical movie about General George Patton and his exploits during WWII. The film was released in 1970 and starred George C. Scott in the title role. “Patton” won seven Oscars including one for Scott as Best Actor. Scott refused the award saying that he disliked “acting competitions”. In so doing, he became the first actor to refuse an Academy Award.

35. Be daring : PUSH THE ENVELOPE
The phrase to “push the envelope” is a relatively recent one, only dating back to the 1970s. It was popularized in Tom Wolfe’s celebrated book “The Right Stuff”, as it was oft-quoted during the space program. The “envelope” in question was the “mathematical envelope” that had to be “pushed” in order to make the space program successful.

40. Noted entertainer with a whistle : HARPO
Harpo Marx was the second oldest of the Marx brothers. Harpo’s real name was Adolph, and he earned his nickname because he played the harp. Famously he didn’t speak on screen, a routine he developed after reading a review that he performed really well when he just didn’t speak!

41. Site of a religious retreat : APSE
The apse of a church or cathedral is a semicircular recess in an outer wall, usually with a half-dome as a roof and often where there resides an altar. Originally apses were used as burial places for the clergy and also for storage of important relics.

43. Sneeze cause : RAGWEED
The pollen of ragweed is the greatest allergen of all pollens. It seems that the pollen season has been lengthening in recent years, probably due to global warming.

51. “Julie & Julia” co-star : AMY ADAMS
Amy Adams is an American actress. My favorite film of hers so far is the outstanding “Julie & Julia” in which she acted alongside Meryl Streep. I highly recommend this truly delightful movie.

56. “Bad for bacteria” brand : LISTERINE
Listerine is an antiseptic mouthwash. The brand takes its name from Joseph Lister, the British surgeon and promoter of antiseptic surgery.

58. Setting for the 1996 documentary “When We Were Kings” : ZAIRE
The African nation that was once called Zaire is a neighbor of Rwanda. The genocide and war in Rwanda spilled over into Zaire in 1996, with the conflict escalating into what is now called the First Congo War. As part of the war’s fallout, there was a regime change, and in 1997 Zaire became the Democratic Republic of Congo.

“When We Were Kings” is a documentary by Leon Gast, released in 1996. It tells of the “Rumble in the Jumble” world heavyweight title fight between Muhammad Ali and George Foreman that took place in Zaire. That’s the fight with the famous “rope-a-dope” tactic that tired out Foreman, and left him selling grills for the rest of his life …

59. “Funny People” actor : SETH ROGEN
Seth Rogen is a Canadian comedian who got a lot of credit for his supporting role in “The 40-Year-Old Virgin”. That led to him being cast as the lead in the 1970 film “Knocked Up”. I am afraid that I haven’t seen either movie …

Max Ernst was born near Cologne in Germany in 1891. He had to fight in WWI, as did most young men. In his autobiography he writes, “Max Ernst died the 1st of August, 1914” a statement about his experiences in the war. Actually, he lived to the ripe old age in 85, dying in 1976.

63. “L’Amateur d’estampes” painter : DEGAS
Edgar Degas was a French artist, famous for his paintings and sculptures. Some of his most beautiful works feature female ballet dancers, and others depict women bathing.

“L’Amateur d’estampes” is an 1866 painting by Edgar Degas that you can see at the Metropolitan Museum of Art in New York City. I think that the title translates as “The Stamp Collector”.

Down
1. Subjunctive, e.g. : MOOD
The subjunctive mood is a verb mood that is used to express a condition that is doubtful or not factual.

5. French nuns : SOEURS
“Soeur” is the French word for “sister.

7. Midway, e.g. : ATOLL
Midway is an atoll lying in the North Pacific Ocean. It is located about one third of the way between Hawaii and Japan. The island was at the center of the Battle of Midway in WWII when the US Navy defeated a Japanese attack on the islands, which proved to be a major turning point in the war.

8. Fratricide victim of myth : REMUS
According to tradition, Rome was founded by the twin brothers Romulus and Remus. The pair had a heated argument about who should be allowed to name the city and Romulus hit Remus with a shovel, killing him. And so, “Rome” was born!

9. “Meet the ___” (major-league fight song) : METS
“Meet the Mets” is the fight song of the New York Mets baseball team. The song was first heard in 1962 when the brand new Mets team played its first game.

10. Bye lines? : CIAOS
“Ciao” is the Italian for “bye”. “Arrivederci” is more formal and translates better as “goodbye”.

12. Artist’s supply : GESSO
Gesso is the Italian word for “chalk” and gives it name to the powdered calcium carbonate that is used as a primer coat under artistic panel paintings. The gesso is mixed with a glue and when applied to wood it acts as an absorbent surface for paint.

25. Part of a bar order : TAPA
“Tapa” is the Spanish word for “lid”. There is no clear rationale for why this word came to be used for an appetizer. There are lots of explanations cited, all of which seem to involve the temporary covering of one’s glass of wine with a plate or an item of food to either preserve the wine or give one extra space at the table.

27. King, e.g.: Abbr. : REV
I remember listening to the full text of Dr. Martin Luther King, Jr’s “I have a dream …” speech not long after I moved to this country. I think I am man enough to admit that my eyes misted up as I listened to the words. I also recall thinking how lucky I was to have been invited to live in this great country, which was facing up to some of the sins of its past.

I have a dream that one day this nation will rise up and live out the true meaning of its creed: “We hold these truths to be self-evident: that all men are created equal.

30. Like ’40s boppers : HEP
The slang term “hep” meaning “cool” has the same meaning as the later, derivative term “hip”. The origins of “hep” seem unclear, but it was adopted by jazz musicians of the early 1900s.

31. Colossal, to Coleridge : ENORM
“Kubla Khan” by Samuel Taylor Coleridge is my wife’s favorite poem. Coleridge wrote the masterpiece one night in 1797, after a vivid dream heavily influenced by opium.

36. It rolls across fields : THUNDER
I am not sure what the reference is here …

37. Gorgon, e.g. : HAG
The Gorgons were feared female creatures of Greek mythology. They were three sisters who had hair made up of living snakes. Anyone who looked on their faces would be turned to stone instantly.

46. Makings of a model, maybe : BALSA
Balsa is a very fast growing tree that is native to parts of South America. Even though balsa wood is very soft, it is actually classified as a hardwood, the softest of all the hardwoods (go figure!). Balsa is light and strong, so is commonly used in making model airplanes and rafts. Amazingly, in WWII a full-size British plane, the de Havilland Mosquito, was built largely from balsa and plywood. No wonder they called it “The Wooden Wonder” and “The Timber Terror”.

47. Billet-doux recipients : AMIES
“Une amie” is “a girlfriend” in French. She might write a billet-doux to her ami. Billet-doux is a French term for a love letter. A “billet” is a short note, and “doux” means sweet.

49. Computer that pioneered in CD-ROMs : AMIGA
The Amiga is a line of desktop computers that was made by Commodore in the eighties and nineties.

50. Onetime Moore co-star : ASNER
Ed Asner is most famous for playing the irascible but lovable Lou Grant on “The Mary Tyler Moore Show” and on the spin-off drama “Lou Grant”. Off-screen Asner is noted for his political activism. He served two terms as president of the Screen Actors Guild (SAG), and was very involved in the 1980 SAG strike. When “Lou Grant” was cancelled in 1982, despite decent ratings, there was a lot of talk that the cancellation was a move by the network against Asner personally. In fact one of Asner’s activist colleagues Howard Hesseman, who played Johnny Fever on “WKRP in Cincinnati”,  he found that his show was also cancelled, on the very same day …

52. Longtime Yankee moniker : A-ROD
Poor old Alex Rodriguez earned more nicknames than just A-Rod. He has been called “the Cooler” by some players as there is a perception that teams go cold when he joins them and hot when he leaves. He has also been called “A-Fraud” by teammates because of another perception, that he is over-demanding.

54. Nocturnal bear : URSA
The constellation called Ursa Major (Latin for “Larger Bear”) is often just called the Big Dipper because of its resemblance to a ladle or dipper. Ursa Major also resembles a plow, and that’s what we usually call it back in Ireland, the “plough”.

57. Rhinology expert, for short : ENT
An Ear, Nose and Throat specialist is an ENT.

Rhinology is the study of the nose and the sinuses.