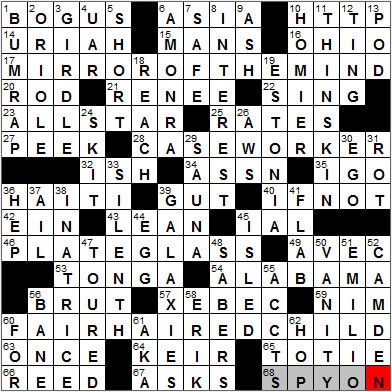 CROSSWORD SETTER: Mike Buckley
THEME: VANITY … each of the theme answers starts with a word that can be paired with VANITY:

50D. Unappealing personal trait … or a word that can precede the start of 17-, 28-, 46- or 60-Across : VANITY
17A. Imagination, metaphorically : (VANITY) MIRROR OF THE MIND
28A. Investigator of family problems, say : (VANITY) CASE WORKER
46A. It’s seen in shop windows : (VANITY) PLATE GLASS
60A. One who’s favorably looked upon : (VANITY) FAIR-HAIRED CHILD


Today’s Wiki-est, Amazonian Googlies
6. ___ Minor : ASIA
Asia Minor is also known as Anatolia. It is the geographic part of Asia that protrudes out into the west, towards Europe. It is roughly equivalent to modern-day Turkey.

10. Letters starting an address : HTTP
“http” are the first letters in most Internet links. “http” stands for HyperText Transfer Protocol.

14. ___ Heep : URIAH
Uriah Heep is a sniveling insincere character in the novel “David Copperfield” by Charles Dickens. The character is such a “yes man” that today, if we know someone who behaves the same way, then we might call that person a “Uriah Heep”.

16. Indiana’s smallest county or the river it touches : OHIO
The Ohio is the largest tributary of the Mississippi by volume. In fact where the two rivers meet, in Cairo, Illinois, the Ohio is actually the larger of the pair.

20. Part of a nuclear reactor : ROD
In a nuclear fission reactor the reaction needs to be controlled (duh!). A fission reaction takes place because of neutron bombardment provided by radioactive elements. Control rods are inserted into the fissionable material to slow down the reaction. This slow-down is achieved because the control rods are made of material that absorbs neutrons and slows down fission.

21. Zellweger of “Miss Potter” : RENEE
Renée Zellweger’s big break came in the 1996 movie “Jerry Maguire”. A few years later she followed that up with a string of successes in “Bridget Jones Diary” (2001), “Chicago” (2002) and “Cold Mountain” (2003). My wife and I love watching her play Bridget Jones, and as someone coming from the British Isles I have to say she does a remarkable job with the accent. She worked hard to perfect that accent, and of course she had a voice coach. She also went “undercover” and worked as a temp in an office for three weeks fine-tuning her skills.

“Miss Potter” is a movie about the life of children’s author Beatrix Potter, the creator of characters such as the celebrated Peter Rabbit. The film stars Renée Zellweger in the title role, opposite Ewan McGregor. We had the privilege of visiting Potter’s home in the Lake District in England a few years ago. Good times …

22. Perform on “Glee,” perhaps : SING
The relatively new TV show called “Glee” is proving to be very popular. The storyline focuses on a high school glee club in Lima, Ohio.

Whitesnake is a rock band from England, formed in 1978 by singer David Coverdale when he left Deep Purple.

36. Hispaniola’s western half : HAITI
The Caribbean island of Hispaniola was a target for European settlers, and ended up being a disputed territory between France and Spain. The two countries divided the island with the French taking control of the western third, which they named Saint-Domingue. Saint-Domingue was later to become the independent, French-speaking Republic of Haiti.

42. Article in Austria : EIN
“Ein” is an indefinite article in German.

The name “Austria” is a Latin variant of the German name for the country, “Österreich”. “Österreich” itself means “Eastern borderlands”, a reference to the country’s history as a prefecture of neighboring Bavaria.

43. Like the food Jack Sprat eats : LEAN
Jack Sprat was a nickname given in the 16th century to people of small stature. Jack featured in a proverb of the day:

Over time, this mutated into a nursery rhyme that can heard in England to this day:

46. It’s seen in shop windows : (VANITY) PLATE GLASS
A vanity plate is a vehicle registration plate for which owner’s pay extra money in order to choose their own numbers or letters. There are almost 10 million vehicles with vanity plates in North America, with the highest percentage of vanity plates being in the US state of Virginia. The world’s most expensive personal number plate is the number “1” on Dubai plate, which cost $14 million …

56. Very dry, as Champagne : BRUT
Sparkling wines can be classified according to sweetness. These classifications are, from driest to sweetest:

57. Three-masted sailing ship : XEBEC
A xebec (also a zebec) was a sailing ship that was found around the Mediterranean. It had three masts with sails that extended behind the stern and ahead of the bow.

59. Subtraction game : NIM
Nim is an ancient entertainment, a simple mathematical game of strategy. Nim involves removing items from distinct piles (say matchsticks). Each player must remove at least one item per turn, and the last person to remove an item is the loser.

60. One who’s favorably looked upon : (VANITY) FAIR-HAIRED CHILD
William Makepeace Thackeray subtitled “Vanity Fair” using the words “A Novel without a Hero”. He meant this as a warning to us that there are no unflawed characters in the story. I very much enjoyed the 2004 “Vanity Fair” movie, starring Reese Witherspoon.

65. Funny Fields : TOTIE
Totie Fields was the stage name of comedian Sophie Feldman. “Totie” is a corruption of “Sophie” and was what she was called as a child.

66. Harmonica part : REED
The harmonica is a reed instrument. It contains a number of  reeds that are usually made from metal, all arranged on a reed plate.

Down
2. Orange-and-black bird : ORIOLE
The orioles make up a family of Old World birds found across Africa, Europe, Asia and Australia.

4. Nasser’s fed. : UAR
Gamal Abdel Nasser was the second president of Egypt, from 1956 until he died in 1970. He stood alongside Muhammad Naguib, Egypt’s first president, during the Egyptian Revolution of 1952 which overthrew the ruling monarchy of Egypt and Sudan. Nasser was an advocate of Pan-Arabism, an ideology promoting unification of Arab peoples and countries. President Nasser went so far as forming the United Arab Republic (UAR), a union between Egypt and Syria that started in 1958, but fell apart in 1961 when Syria withdrew.

5. There has been one with every Pixar film since 1998 : SHORT
Pixar started making special movie shorts to be released with feature-length film in 1998, along with the company’s second major release called “A Bug’s Life”.

Pixar Animation Studios started out as part of Lucasfilm in 1979, George Lucas’s production company. Lucas sold what was to become Pixar to Apple CEO Steve Jobs in 1986. Pixar produced its first feature film in 1995, the fabulous “Toy Story”, and followed it with a string of hits. The company was then sold again, to Walt Disney in 2006, when valued at $7.4 billion. That transaction resulted in Steve Jobs becoming the single largest shareholder in the Walt Disney Company.

6. King of gods, in Egyptian myth : AMON-RA
Amun (also Amon and “Amun-Ra”) was a god in Egyptian mythology. Amun lends his name to our word “ammonia”. This is because the Romans called the ammonium chloride that they collected near the Temple of Jupiter Amun, “sal ammoniacus” (salt of Amun).

9. Pompeii’s downfall? : ASH
Mount Vesuvius is on the Bay of Naples, just over five miles from the city of Naples. The most famous of its eruptions took place in AD 79, the one which destroyed the Roman cities of Pompeii and Herculaneum. Today Vesuvius is considered to be one of the most dangerous volcanoes in the world, largely because it is at the center of the most densely populated volcanic region in the world, with 3 million people living nearby.

19. Its Internet addresses end in .ee : ESTONIA
Estonia is one of the former Soviet Socialist Republics. It is located in Northern Europe on the Baltic Sea, due south of Finland. Estonia has been overrun and ruled by various empires over the centuries. Estonia did enjoy a few years of freedom at the beginning of the 20th century after a war of independence against the Russian Empire. However, the country was occupied again during WWII, first by the Russians and then the Germans, and reoccupied by the Soviets in 1944. Estonia has flourished as an independent country again since the collapse of the USSR in 1991.

29. Finnish hot spot : SAUNA
As my Finnish-American wife will tell you, “sauna” is a Finnish word, and is pronounced “sow-nah” (with “sow” as in the female pig).

30. One of a Freudian trio : EGO
Sigmund Freud created a structural model of the human psyche, breaking it into three parts: the id, the ego, and the super-ego. The id is that part of the psyche containing the basic, instinctual drives. The ego seeks to please the id by causing realistic behavior that benefits the individual. The super-ego almost has a parental role, contradicting the id by introducing critical thinking and morals to behavioral choices.

31. Balderdash : ROT
“Balderdash” means a senseless jumble of words, and was originally (back before the late 1600s) a jumbled mix of liquids (like maybe beer and wine, or even beer and milk!).

36. Up on things, in the ’40s : HEP
The slang term “hep” meaning “cool” has the same meaning as the later derivative term “hip”. The origins of “hep” seem unclear, but it was adopted by jazz musicians of the early 1900s.

39. Andromeda and others : GALAXIES
Our galaxy is the Milky Way, and the nearest “spiral galaxy” to ours is the Andromeda Galaxy. It is not the nearest galaxy, as that honor belongs to the Canis Major Dwarf Galaxy.

44. Humpty Dumpty, e.g. : EGG
Humpty Dumpty is a character in a nursery rhyme, actually an egg although that isn’t specifically called out in the original rhyme:

51. Estevez of “The Breakfast Club” : EMILIO
Emilio Estevez is one of the members of the famous “Brat Pack”, having appeared in “The Breakfast Club” and “St. Elmo’s Fire”. Estevez’s father (and can’t you tell it from looking at him?) is actor Martin Sheen. Estevez decided to keep his father’s real name, and not the stage name of “Sheen”. Charlie Sheen is Emilio’s brother, and Charlie’s real name is Carlos Estevez.

58. Composer Satie : ERIK
Erik Satie was a French composer most famous for his beautiful composition, the three “Gymnopédies”. I have tried so hard to “enjoy” other works by Satie but I find them so very different from the minimalist simplicity of “Gymnopédies”.