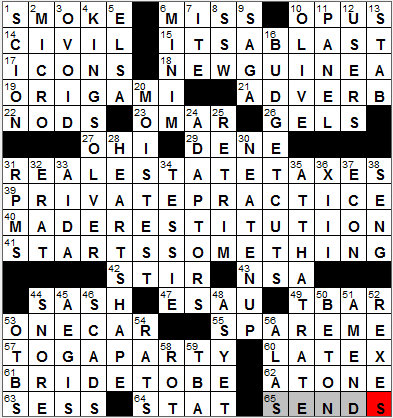 
Today’s Wiki-est, Amazonian Googlies
10. One on a Liszt list : OPUS
Franz Liszt (1811-1886) was a Hungarian composer, and a fabulous pianist. Particularly towards the end of his life, he gained a tremendous reputation as a teacher. While he was in his sixties, his teaching profession demanded that he commute regularly between the cities of Rome, Weimar and Budapest. It is quite remarkable that a man of such advanced age, and in the 1870s, could do so much annual travel. It is estimated that Liszt journeyed at least 4,000 miles every year!

15. “This shindig rocks!” : IT’S A BLAST
“Shindig” is such a lovely word, I think, describing a party that usually includes some dancing. Although its origin isn’t really clear, it perhaps comes from “shinty”, a Scottish game similar to field hockey.

18. Part of Melanesia : NEW GUINEA
New Guinea is an island in the southwest Pacific Ocean. It is the second largest island in the world (after Greenland). The western half of the the island is ruled by Indonesia, and is made up of the provinces of Papua and West Papua. The eastern half of the island forms the mainland of the independent country called Papua New Guinea.

19. Subject for a folder : ORIGAMI
The Japanese word “origami” is derived from ori (folding) and kami (paper).

23. “The thoughtful soul to solitude retires” poet : OMAR
Omar Khayyam was a Persian with many talents beyond writing poetry. He was also an important mathematician, astronomer and physician. A selection of his poems were translated by one Edward Fitzgerald in a collection called “Rubaiyat of Omar Khayyam”.

43. Wiretapping grp. : NSA
The National Security Agency (NSA) was set up in 1952 by President Truman, a replacement for the Armed Forces Security Agency that had existed in the Department of Defense since 1949. The NSA has always been clouded in secrecy and even the 1952 letter from President Truman that established the agency was kept under wraps from the public for over a generation. I really like this nickname often used for the organization: “No Such Agency”.

44. Accessory that may have a state name on it : SASH
The Miss USA beauty pageant was founded in 1952 in order to select the American candidate for the Miss Universe competition.

47. Old Testament “man of the field” : ESAU
Esau was the twin brother of Jacob, the founder of the Israelites. When their mother, Rebekah, gave birth to the twins “the first emerged red and hairy all over (Esau), with his heel grasped by the hand of the second to come out (Jacob)”. As Esau was the first born, he was entitled to inherit his father’s wealth (it was his “birthright”). Instead, Esau sold his birthright to Jacob for the price of a “mess of pottage” (a meal of lentils).

49. Lift, of a sort : T-BAR
A T-bar is a type of ski lift in which the skiers are pulled up the hill in pairs, with each pair standing (not sitting!) either side of T-shaped metal bar. The bar is placed behind the thighs, pulling along the skier who remains standing on his/her skis (hopefully!). There’s also a J-bar, a similar device, but with each J-shaped bar used by one skier at a time.

57. Occasion to put on sheets : TOGA PARTY
In Ancient Rome the classical attire known as a toga (plural “togae”) was usually worn over a tunic. The tunic was made of linen, and the toga itself was a piece of cloth about twenty feet long made of wool. The toga could only be worn by men (the female equivalent was called a “stola”) and only if those men were Roman citizens.

Down
1. Offshoot : SCION
Scion comes from the old French word “sion” or “cion”, meaning “a shoot or a twig”. In botanical terms today, a scion is used in grafting two compatible plants together. In grafting, one plant is selected for its root system (the “rootstock”), and the other plant is selected for its stems, leaves and fruit (the “scion”). The term scion migrated naturally into the world of family history. A scion is simply a descendant, a son or a daughter and therefore a branching point in the family tree.

4. Novelist whose character Adah speaks in palindromes : KINGSOLVER
Barbara Kingsolver is a writer who now lives in rural Virginia. She wrote a book that is a favorite of mine called “Animal, Vegetable, Miracle” which tells of her family’s efforts to eat locally for a year. It is a very inspirational and educational tale that I highly recommend.

5. Four-footed orphan of literature : ELSA
Elsa’s life story was told by game warden Joy Adamson, who had a very close relationship with the lioness from when she was orphaned as a young cub. Adamson wrote the book “Born Free” about Elsa, and then “Living Free” which told the story of Elsa and her three lion cubs. In the 1966 film “Born Free” Adamson is played by actress Virginia McKenna.

9. Continuing drama : SAGA
“Saga” is an Old Norse word for a long and elaborate story, and a word that we’ve been using in English only since the early 1700s.

31. CD rate? : RPMS
The Compact Disc (CD) is an optical storage device that was developed for the storage and playback of music. Derivative products were later developed such as the CD-ROM for data storage, and the PhotoCd for storage of images.

32. “Hoc ___ in votis” : ERAT
Among Horace’s works are a set of poems called satires (“Sermones” in Latin). One of the satires is called “Hoc erat in votis” which translates from Latin as, “This is in my prayers”.

33. Slave singing several solos : AIDA
“Aida” is the famous opera by Giuseppe Verde, actually based on a scenario written by a French Egyptologist Auguste Mariette, who also designed the costumes and stages for the opening performance. The opera was first performed in 1871 in an opera house in Cairo. In the storyline Aida is an Ethiopian princess brought into Egypt as a slave. Radames is an Egyptian commander who falls in love with her, and then of course, complications arise!

34. Red Sox anthem : TESSIE
“Tessie” is a song from a Broadway musical called “The Silver Slipper” which played in the very early 1900s. The song is about a woman who was singing to her parakeet called Tessie. While the show was running on Broadway, the song was adopted by a loyal collection of fans of the Boston Americans (later to be called the Boston Red Sox). About a hundred years later, in 2004, a new version of the song was recorded by the Celtic punk group called Dropkick Murphys. This new version is played and sung at every Red Sox game.

36. Number of one of the Olympics canceled due to W.W. II : XIII
The 1944 Summer Olympics was scheduled to be held in London, but they were cancelled as WWII was still raging. Four years later London was awarded the 1948 Games.

37. Study of some bubbles?: Abbr. : ECON
The world’s first ever speculative “bubble” in the financial markets took place in 1637, when the price of tulip bulbs sky-rocketed out of control. The tulip had been introduced into Europe a few years earlier, and demand for tulips was so high that single bulbs were selling for ten times the annual income of a skilled craftsman. The climb in prices was followed quickly by a collapse in the market that was so striking that the forces at play were given the term “tulip mania”. To this day, any large economic bubble may be referred to as “tulip mania”.

38. Hong Kong’s Hang ___ index : SENG
The Hang Seng Index (HSI) is the most important stock market index reported from Hong Kong. The index was started in 1969 by one of the largest banks in Hong Kong, the Hang Seng Bank.

45. Umbrella : AEGIS
Someone is said to be under the aegis of someone else when that other person provides protection or perhaps sponsorship.

It’s thought that the term “oodles” comes from “kit and caboodle”.

52. Curly-furred cats : REXES
A rex cat is the name given to a number of different breeds. The common characteristic is that due to a genetic mutation, every rex cat has wavy or curly hair.

53. Parlors with TV screens: Abbr. : OTBS
Off-Track Betting (OTB) is the legal gambling that takes place on horse races outside of a race track. A betting parlor can be referred to as an OTB.