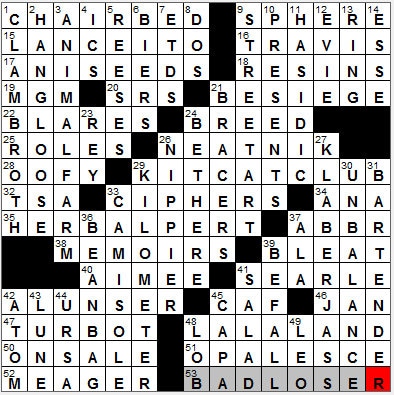 
Today’s Wiki-est, Amazonian Googlies
15. Target of criticism in Vincent Bugliosi’s 1996 book “Outrage” : LANCE ITO
Judge Lance Ito came in for a lot of criticism for his handling of the O.J. Simpson murder trial. The lead prosecutor in that trial was Marcia Clark, you might recall. I read her book “Without a Doubt” a few years ago, and she pointed out one trait of Judge Ito that I think is quite telling. Ito would almost always refer to the prosecutor as “Marcia”, while addressing the men on both sides of the case as “Mister”.

Vincent Bugliosi is an attorney and author, best-known in the courtroom for having prosecuted Charles Manson. One of his books was called “Outrage”, a 1996 publication in which he criticized almost everyone involved in the prosecution of O.J. Simpson.

17. Sambuca flavorers : ANISEEDS
Sambuca is an Italian liqueur that is flavored with anise. It is often served straight up with three coffee beans floating on the surface. The beans are said to represent health, happiness and prosperity. A more “saucy” representation for the beans is the husband, wife and mistress.

18. Two of the three gifts of the Magi : RESINS
Frankincense and myrrh are both tree resins, exuded when certain species of tree are damaged. The harvested resins are used to make essentials oils for perfumes, and are also burned to give off a pleasant fragrance.

“Magi” is the plural of the Latin word “magus”, a term applied to someone who was able to read the stars. Hence, magi is commonly used with reference to the “wise men from the East” who followed the star and visited Jesus soon after he was born.

20. Some discount beneficiaries: Abbr. : SRS
We seniors sometimes get discounts.

24. Burmese, e.g. : BREED
Most Burmese cats today can be traced back to a single ancestor, a female cat given the name Wong Mau that was brought from Burma to America in 1930. Amazing …

29. 18th-century London political/literary establishment : KIT-CAT CLUB
The Kit-Cat Club was a club in London in the early 18th century. The members had a common interest in furthering the political agenda of the Whig parliamentary party. The club apparently got its name from the “Kit Kats” that were produced in the tavern where the members first met. Kit Kats were mutton pies.

32. Airport inits. : TSA
The Transportation Security Administration (TSA) was of course created in 2001, soon after the 9/11 attacks.

33. Big nothings : CIPHERS
The word “cipher” can be used for a person with no influence, a nonentity. The term comes from the Arabic “sifr” meaning “zero”. So, a cipher is a big nothing.

34. Suffix in the world of collectibles : -ANA
An ana (or plural anas) is a collection, including literature, that represent the character of a particular place or a person. Ana can be used as a noun, or as a suffix.

37. Answer that’s an example of itself : ABBR
Abbr. is an abbreviation for “abbreviation”!

38. Ghosts often work on them : MEMOIRS
Memoirs are often written by ghost writers.

41. Company that introduced Dramamine : SEARLE
Dramamine is a brand name for dimenhydrinate, a drug used to counteract motion sickness.

47. Bouillabaisse fish : TURBOT
Turbot is an asymmetric flatfish with eyes on its upper, left side. Some turbot can grow to be very large, up to 55 pounds in weight.

51. Show a milky shimmer : OPALESCE
An opal is often described as having a milky iridescence, known as “opalescence”.

Down
1. Bouillabaisse base, sometimes : CLAM BROTH
Bouillabaisse is a traditional seafood stew that originated in the port city of Marseille on the Mediterranean coast of France.

3. Napoleon is a commander in it : ANIMAL FARM
“Animal Farm” is the 1945 novella written by George Orwell, a satire of life in the Soviet Union under Joseph Stalin. Orwell had trouble getting his novel published in his homeland of the UK during WWII, as anti-Soviet literature wasn’t a good thing to publish while the UK and USSR were on the same side of a World War. In fact, one publisher who was willing to distribute the book changed his mind after being warned off by the British Ministry of Information. Given his experiences, I find it interesting that Orwell should write “Nineteen Eight-Four” a few years later, and introduce the world to Big Brother.

6. Stands for viewings : BIERS
Biers are the special stands on which one rests a coffin for a service, or perhaps if the corpse is to lie in state. A bier may have wheels on it so that it can be used to transport the coffin to the graveside. The original biers were just flat pieces of wood on which the body was placed, covered with a shroud. Nowadays, we place the body in a casket, and then onto the biers.

8. Heading for the first of two columns : DOS
Dos and don’ts.

11. Like some Jewish dynasties : HASIDIC
The Hasidic Jewish movement was founded in the 18th century by Baal Shem Tov, a mystical rabbi from Eastern Europe.

12. One of the Wilcoxes in “Howards End” : EVIE
“Howards End” was written by E. M. Forster. Emma Thompson won an Oscar for her part in the excellent 1992 film adaptation.

27. Trick-taking game : KLABERJASS
Klaberjass is a card game also known as Bela. It is very popular in Jewish communities, and is thought to have originated in Northern Europe.

29. One of about five in a league : KILOMETER
The league is an old unit of length. Originally it was defined as the distance a horse or a person could walk in an hour, and so is equivalent to about three miles.

33. Knickers go-with : CAMISOLE
A camisole is a sleeveless undergarment worn by women that extends down to the waist. “Camisole” is a French word that we imported into English, which ultimately derives from the Latin “camisia” meaning “shirt, nightgown”.

The term “salad” can be used to simply mean “mixture”.

43. Figure in plane geometry : LUNE
By definition a “lune” is a figure formed by the intersection of two arcs of two circles. Such an intersection creates the shape of a crescent moon. The name “lune” comes from the Latin word for the moon, “luna”.

44. Bear aloft? : URSA
The constellation called Ursa Major (Latin for “Larger Bear”) is often just called the Big Dipper because of its resemblance to a ladle, or dipper. Ursa Major also resembles a plow, and that’s what we usually call it back in Ireland, the “plough”.

45. Bullfighting cloak : CAPA
“Capa” is the Spanish for “cloak”.

48. Tactic against a net rusher : LOB
In say tennis, a player who rushes the net can be sent back by throwing up a lob that goes over his or her head.

49. Fender of Fender guitars : LEO
The company that made Fender electric guitars was founded in Fullerton, California in 1946 by Leo Fender.