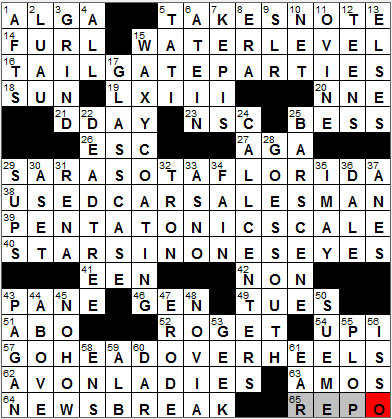 15. It might tax a levee : WATER LEVEL
A levee is an artificial bank, usually made of earth, running along the length of a river. It is designed to hold back the river water at a time of potential flooding. “Levee” is the French word for “raised”, and is an American term that originated in French-speaking New Orleans around 1720.

21. When to begin an operation : D-DAY
The most famous D-Day in history was June 6, 1944, the date of the Normandy landings in WWII. The term “D-Day” is used in the military to designate the day on which a combat operation is to be launched, especially when the actual date has yet to be determined. What D stands for seems to have been lost in the mists of time although the tradition is that it just stands for “Day”. In fact, the French have a similar term, “Jour J” (Day J), with a similar meaning. We also use H-Hour to denote the hour the attack is to commence.

23. Grp. advising the president : NSC
The National Security Council was created by President Harry S. Truman in 1947. The NSC is chaired by the sitting president, and meets in the White House Situation Room.

25. 1940s-’50s White House name : BESS
Harry and Bess Truman met when they were very young children, at Sunday school. They were friends right through high school and became engaged in 1918 just before Harry went off to France during WWI, marrying the next year. Bess Truman never really took to the Washington scene when she became First Lady, and stayed out of the limelight as much as she could. Perhaps that contributed to her longevity. Mrs. Truman lived to the age of 97, making her the longest living First Lady in US history.

27. Topkapi title : AGA
“Topkapi” is a fun film released in 1964. It is based on the novel “The Light of Day” by Eric Ambler. Peter Ustinov played one of the leading roles in the movie, and yet he won the Best Supporting Actor Oscar for his performance.

“Aga”, or “agha”, is a title that was used by both civil and military officials in the Ottoman Empire.

29. Baltimore Orioles’ spring training site : SARASOTA, FLORIDA
The Baltimore Orioles was one of the eight charter teams of MLB’s American League, so the franchise dates back to 1901. Prior to 1901, the team has roots in the Minor League Milwaukee Brewers, and indeed entered the American League as the Brewers. In 1902 the Brewers moved to St. Louis and became the Browns. The team didn’t fare well in St. Louis, so when it finally relocated to Baltimore in the early fifties the team changed its name completely, to the Baltimore Orioles. The owners so badly wanted a fresh start that they traded 17 old Browns players with the New York Yankees. The trade didn’t help the team’s performance on the field in those early days, but it did help distance the new team from its past.

“Amazing Grace” is a very, very famous hymn, with words written by John Newton in 1779. The words have been set to a number of different melodies, but what we are used to hearing is that of a tune named “New Britain”.

49. When many ballots are cast: Abbr. : TUES
Election Day was chosen by congress back in 1845. The month of November was selected as it suited an agricultural society, following the fall harvest and yet not too far into winter, which could make travel difficult. Tuesday was chosen so that people had time to travel to polling stations. Monday elections might have meant that some would have to start out on Sunday, and that could interfere with Christian services.

51. Blood-typing syst. : ABO
The most important grouping of blood types is the ABO system. Blood is classified as either A, B, AB or O, depending on the type of antigens on the surface of the red blood cells. A secondary designation of blood is the Rh factor, in which other antigens are labelled as either positive or negative. When a patient receives a blood transfusion, ideally the donor blood should be the same type as that of the recipient, as incompatible blood cells can be rejected. However, blood type O-Neg can be accepted by recipients with all blood types, AB or O, positive or negative. Hence someone with O-neg blood type is called a “universal donor”.

52. Subject of the 2007 biography subtitled “The Man Who Became a Book” : ROGET
Peter Mark Roget was an English lexicographer. He was an avid maker of lists, apparently using the routine of list-making to combat depression, a condition he endured for most of his life. He published his famous thesaurus in 1852, with revisions and expansions being made years later by his son, and then in turn by his grandson.

54. Old wiring org. : UPI
United Press International (UPI) was one of the biggest news agencies in the world, sending out news by wire to the major newspapers. UPI ran into trouble with the change in media formats at the end of the twentieth century and lost many of its clients as the afternoon newspapers shut down due to the advent of television news. UPI, which once employed thousands, still exists but with only a handful of employees.

62. Workers associated with ding-dongs : AVON LADIES
In 1886, a young man called David McConnell was selling books door-to-door. To enhance his sales numbers he was giving out free perfume to the ladies of the houses that he visited. Seeing as his perfume was more popular than his books he founded the California Perfume Company in New York City and started manufacturing and selling across the country. The company name was changed to Avon in 1939, and the famous “Avon Calling” marketing campaign was launched in 1954.

63. “Chicago” husband ___ Hart : AMOS
The wonderful 1975 musical “Chicago” is based on a 1926 play of the same name by a news reporter called Maurine Dallas Watkins. Watkins had been assigned to cover the murder trials of Beulah Annan and Belva Gaernter for the “Chicago Tribune”, and used the story that unfolded as the basis for her play. Annan became the character Roxie Hart, and Gaernter became Velma Kelly.

65. It happens by default : REPO
Default on payments of your car, say, and the repo guy might come calling.

Down
2. Island do : LUAU
Nowadays the word “luau” denotes almost any kind of party on the Hawaiian Islands, but to the purist a luau is a feast that always includes a serving of “poi”, the bulbous underground stems of taro baked with coconut milk.

5. Star of “Mon Oncle” : TATI
Jacques Tati was a very famous filmmaker in France. “Mon Oncle” was an Oscar-winning film that he released in 1958.

8. Tudor ___ : ERA
The Wars of the Roses was a series of civil wars fought for the throne of England between the rival Houses of Lancaster and York. Ultimately the Lancastrians emerged victorious after Henry Tudor defeated King Richard III at the Battle of Bosworth Field. Henry was crowned King Henry VII and united the two Houses by marrying his cousin, Elizabeth of York. Henry had a relatively long reign of 23 years that lasted until his death, after which his son succeeded to the throne as Henry VIII, continuing the relatively short-lived Tudor dynasty. He ruled from 1509 until his death in 1547. Henry VIII was the last male to lead the the House of Tudor, as his daughter, Queen Elizabeth I, died without issue.

9. Canonflex, e.g. : SLR
SLR stands for Single Lens Reflex. Usually cameras with changeable lenses are the SLR type. The main feature of an SLR is that a mirror reflects the image seen through the lens out through the viewfinder, so that the photographer sees exactly what the lens sees. The mirror moves out of the way as the picture is taken, and the image that comes through the lens falls onto unexposed film, or nowadays onto a digital sensor.

11. Like a wool supplier : OVINE
The Latin word for “sheep” is “ovis”, giving us the adjective “ovine”, meaning “like a sheep”.

15. Cerecloth feature : WAXY COATING
“Cera” is the Latin word for “wax”, and it gives us the verb “to cere” once used to mean “coat in wax”. Cerecloth, cloth coated in wax, was once used to wrap the dead.

31. Sofer of soaps : RENA
Rena Sofer came to prominence as an actor in daytime television, most notably playing Lois Cerullo on “General Hospital”. Her love interest on the show was played by Wally Kurth, and the online romance led to the pair walking down the aisle in real life in 1995 (although they divorced two years later).

Technically, a saturated hydrocarbon is an organic compound with no double or triple bonds between carbon atoms. Because it has no double or triple bonds it is “saturated” with hydrogen, has the maximum number of hydrogen atoms that each carbon atom can take. This is particularly important to us when talking about saturated fats (generally unhealthy, animal-sourced fats) and unsaturated fats (generally, healthy plant-sourced fats).

48. Girlfriend, in Granada : NOVIA
“Novia” is Spanish for “bride, a newly married woman”. That’s a little more than a girlfriend, I’d say …

53. Circus performer : GEEK
The original geek was a sideshow performer, perhaps at a circus.

59. Adriatic repub. : ALB
The Republic of Albania is a country in the Balkans in southeastern Europe. Albania was made a communist state after WWII but became independent again with the collapse of the Soviet Union in 1990.