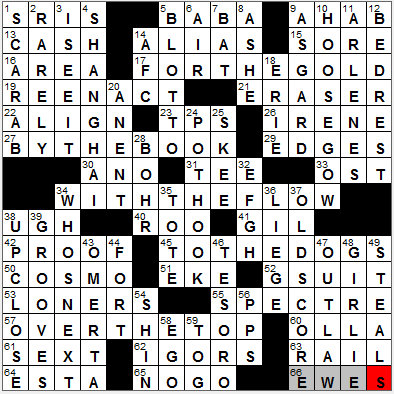 CROSSWORD SETTER: Sharon Delorme
THEME: NO-GO … each of the theme answers is a common expression starting with the word “go”, except that the “go” is missing:


Today’s Wiki-est, Amazonian Googlies
1. Titles of respect : SRIS
“Sri” is a title of respect for a male in India.

5. Rum-laced cake : BABA
Rum baba is a small yeast cake saturated in rum, and sometimes filled with whipped cream. Rum baba is derived from the recipe for the tall “babka” yeast cake that was introduced to the world by the Polish communities. The words “baba” and “babka” mean “old woman” or “grandmother” in English. I guess someone must have thought that all grandmothers were saturated in rum!

9. Fictional character who declares “Sleep? … I do not sleep, I die” : AHAB
Captain Ahab is the obsessed and far from friendly Captain of the Pequod in Herman Melville’s “Moby Dick”.

Herman Melville (whose family home I visited not too long ago) mined his own experiences for his most famous novel, “Moby Dick”. Melville sailed from New Bedford, Massachusetts in 1841 on a whaler heading into the Pacific Ocean (a source for “Moby Dick”). Melville ended up deserting his ship 18 months later, and lived with natives (actually cannibals) on a South Pacific Island for three weeks (a source for “Typee”). He picked up another whaler and headed for Hawaii, where he joined the crew of a US navy frigate headed for Boston (a source for “Omoo”).

23. Pranks, in a way, informally : TPS
TP’ing (toilet papering) is a prank involving the covering of some object or location with rolls and rolls of toilet paper. If you live in Texas or Minnesota, that little “prank” is legal, but if you live here in California it is classed as mischief or vandalism.

26. Mrs. Forsyte in “The Forsyte Saga” : IRENE
“The Forsyte Saga” is a series of novels written by John Galsworthy. There is an excellent BBC television series dating back to 1967 that tells the whole tale in 26 episodes. It ran here in America on PBS and helped to establish “Masterpiece Theater” as the success it is today. In the BBC series, Irene Forsyte was played by Nyree Dawn Porter, but the stars of the show were Susan Hampshire in the role of Fleur Forsyte, and Eric Porter as Soames Forsyte. Great stuff …

30. Period with a tilde? : ANO
In Spanish, a year (año) starts in January (Enero) and ends in December (Diciembre).

40. Piglet’s pal : ROO
Like most of the characters in A. A. Milne’s “Winnie the Pooh”, Roo is based on a stuffed toy belonging to Milne’s son, Christopher Robin.

41. Gerard of “Buck Rogers in the 25th Century” : GIL
Before Buck Rogers made it into the big time in the comic strip “Buck Roger in the 25th Century”, he was a character in a pair of short stories written by Philip Francis Nowlan, the first of which was “Armageddon 2419 A.D.” In the stories, he was known as Anthony Rogers, and was given a name change when he went into the comics.

50. Vodka drink, informally : COSMO
Like so many famous cocktails, the actual origins of the cosmopolitan are disputed. It is a nice drink though. One of the standard recipes is 4 parts citrus vodka, 1.5 parts Cointreau, 1.5 parts lime juice and 3 parts cranberry juice.

51. Scrape (out) : EKE
To “eke out” means to “make something go further or last longer”. So, you can eke out your income by cutting back on expenses. I always have a problem with the definition that “eke out” means to “barely get by”. Close but no cigar, I say …

52. Jet pilot’s wear : G-SUIT
A G-suit is needed when astronauts and aviators are subject to high accelerations. Such acceleration can cause blood to pool in the lower part of the body, reducing the supply to the brain and possibly leading to a black-out. A G-suit is basically a special pair of tight-fitting pants that are fitted with inflatable bladders. The bladders inflate during high accelerations, tightening around the legs and abdomen, reducing the amount of blood pooling.

53. Anchorites : LONERS
The Greek word “anakhoretes” denotes “one who has retired”, that is one who has retreated, withdrawn, gone back. This word was absorbed into Latin as “anchorita” and used to describe a person who retired from the world for religious reasons. The Latin term came into English as “anchorite”. In the early Middle Ages, anchorites (and “anchoresses”) often withdrew to live in simple quarters built onto the side of the local village church. Such simple, one-cell dwellings were called “anchorholds”. Once an anchorhold was constructed for an anchorite, the bishop of the area would lead a ceremony that involved bricking up the doorway, sealing in the person who has pledged himself or herself to the life of solitude.

55. Dr. No’s org. : SPECTRE
“Dr. No” may have been the first film in the wildly successful James Bond franchise, but it was the sixth novel in the series of books penned by Ian Fleming. Fleming was inspired to write the story after reading the Fu Manchu tales by Sax Rohmer, and if you’ve read the Rohmer books or seen the films, you’ll recognize the similarities between the characters Dr. No and Fu Manchu.

60. Cantina vessel : OLLA
An olla is a traditional clay pot used for the making of stews.

61. Send private messages? : SEXT
“Sexting” (a portmanteau of “sex” and “texting”) is the sending of explicit dialog and images between cell phones. The term “sexting” was first coined by the UK’s “Sunday Telegraph Magazine” in a 2005 article. Apparently the practice is “rampant” among teens and young adults. Whatever happened to dinner and a movie?

62. Stravinsky and Sikorsky : IGORS
Igor Stravinsky’s most famous works were completed relatively early in his career, when he was quite young. His three ballets “The Firebird”, “Petrushka” and “The Rite of Spring” were published in 1910-1913, when Stravinsky was in his early thirties.

Igor Sikorsky was a Russian pioneer in the world of aviation. He designed and indeed piloted the world’s first multi-engine, fixed-wing aircraft in 1913. He moved to the US in 1919 and set up his own aircraft manufacturing business. In the thirties he made the magnificent flying boats that were used by Pan Am in their Clipper era. Sikorsky also developed the world’s first mass-produced helicopter, in 1942.

Down
1. Ancient Egyptian talisman : SCARAB
Scarabs were amulets in ancient Egypt. They were modelled on the dung beetle, as it was viewed as a symbol of the cycle of life.

4. Abduct : SHANGHAI
To shanghai someone is to compel that person to do something against their will. “Shanghai” is actually an American term as it was first used to describe the practice of kidnapping men to work as crew on merchant ships, a practice engaged in initially on the West Coast of the US. The word “shanghai” was chosen as Shanghai was a common destination for the ships.

5. Wasted : BLOTTO
The term “blotto” meaning “drunk” dates back to the early 1900s. It supposedly is derived from the word “blot”, in the sense that being drunk you must have soaked up whole load of booze.

8. Queens stadium name : ASHE
The Arthur Ashe Stadium in Queens, New York opened in 1997 and is the largest outdoor, tennis-only venue in the world. The stadium is sometimes criticized for not having a retractable dome to protect the playing surface from inclement weather.

9. Heavenly home of the Norse gods : ASGARD
Asgard is one of the Nine Worlds of Norse religions. It is where the Norse gods live, and is also home to Valhalla, the enormous hall ruled over by the god Odin.

10. Pokey : HOOSEGOW
“Hoosegow” is a slang term for “jail”. It is a mispronunciation of the Mexican-Spanish word “juzgao” meaning “court” or “tribunal”.

11. TV’s Francis and others : ARLENES
I only discovered the wonderful old American TV show “What’s My Line” a few years ago. I was familiar with the show’s British adaptation, but hadn’t spotted the US version until relatively recently in reruns. I fell in love with the beautiful Arlene Francis watching those reruns. She was a regular panelist on the show, and the embodiment of elegance. Host of the show was the erudite and genteel John Daly, the much-respected journalist and broadcaster. Daly became the son-in-law of Chief Justice Earl Warren, when he married Warren’s daughter, Virginia.

14. Chargers’ org. : AFC
The San Diego Chargers is an AFL charter team, so was established in 1959. They played their first season in Los Angeles and moved to San Diego in 1961.

18. Tribe that lent its name to a canal : ERIE
The Erie Canal runs from Albany to Buffalo in the state of New York. What the canal does is allow shipping to proceed from New York Harbor right up the Hudson River, through the canal, and into the Great Lakes. When it was opened in 1825 it had immediate impact on the economy of New York City and locations along its route. It was the first means of “cheap” transportation from a port on the Atlantic seaboard into the interior of the United States. Arguably it was the most important factor contributing to the growth of New York City over competing ports such as Baltimore and Philadelphia. It was largely because of the Erie Canal, that New York became such an economic powerhouse, earning it the nickname of the Empire State.

20. In regard to : ANENT
“Anent” is a preposition meaning “regarding, concerning”.

25. ___-Ball : SKEE
Skee Ball is that arcade game where you roll balls up a ramp trying to “bounce” it into rings for different numbers of points. The game was first introduced in Philadelphia, in 1909.

28. Nobelist Niels : BOHR
Niels Bohr was a Danish physicist who won his 1922 Nobel Prize for his work on quantum mechanics and atomic structure. Later in his life he was part of the team working on the Manhattan Project, developing the first atomic bomb.

36. Feudal lord : LIEGE
A liege was feudal lord, one to whom service or allegiance was owed under feudal law.

39. Musical cuts? : GROOVES
There is just one groove on either side of an old vinyl record.

43. Italian code of silence : OMERTA
Omerta is a code of honor in southern Italian society. The term has been adopted by the Mafia to mean a code of silence designed to prevent a Mafioso from informing to the authorities. For example, the famous Joe Valachi was someone who broke the code of silence in 1963, informing on the New York Mafia. His story was told in the movie “The Valachi Papers”, with Charles Bronson playing Valachi.

46. Gems, precious metals, etc., in Spain : TESORO
“Tesoro” is the Spanish for “treasure”.

47. Billy the Kid or Jesse James : OUTLAW
I’m guessing that Billy the Kid was of Irish stock as his family name was McCarty. Another indication of an Irish connection is that he also used the aliases, William Antrim, Henry Antrim, and Kid Antrim, as Antrim is one of the six counties of Northern Ireland.

56. Letter addendum, for short : PPS
One adds a PS (postscriptum) at the end of a letter. A second postscriptum (or postscript) is a post postscriptum, a PPS. A third is a PPPS …

59. Enclothe : TOG
The verb “tog” meaning to dress up, comes from the Latin “toga”. “Tog” can be use as an informal word for a coat or a cloak. Back in Ireland, togs are what we call swimming shorts.