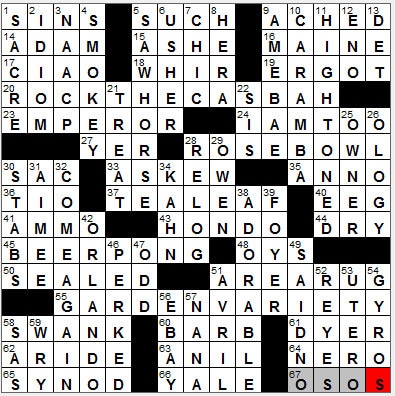 CROSSWORD SETTER: Ian Livengood
THEME: GARDEN VARIETY … all of the theme answers start with a word that defines a type of garden:


Today’s Wiki-est, Amazonian Googlies
Across
14. Economist Smith : ADAM
Adam Smith’s great work in economics is called “The Wealth of Nations”, published in 1776. The book was a big hit within his own lifetime, and went a long way to earning him the reputation as the father of modern economics and capitalism.

15. Arthur who often raised a racket : ASHE
Arthur Ashe was a professional tennis player from Richmond, Virginia. In his youth he found himself having to travel great distances to play against Caucasian opponents due to the segregation that still existed in his home state. He was rewarded for his dedication by being selected for the 1963 US Davis Cup team, the first African America player to be so honored. He continued to run into trouble because of his ethnicity though, and in 1968 was denied entry into South Africa to play in the South African Open. In 1979 Ashe suffered a heart attack and had bypass surgery, with follow-up surgery four years later during which he contracted HIV from blood transfusions. Ashe passed away in 1993, due to complications from AIDS. Shortly afterwards, Ashe was posthumously awarded the Presidential Medal of Freedom by President Bill Clinton.

17. “Later” : CIAO
“Ciao” is the Italian for “bye”. “Arrivederci” is more formal, and translates better as “goodbye”.

19. Grain disease : ERGOT
Ergot is a fungus, or actually a group of fungi, that cause disease in rye and related plants.

20. *1982 hit by the Clash : ROCK THE CASBAH
“Rock the Casbah” was the biggest hit for The Clash, the punk rock band from England.

28. *1994 World Cup final site : ROSE BOWL
The 1994 FIFA World Cup took place in the US, played in nine locations across the country, ending up with the final in the Rose Bowl in Pasadena, California. The total attendance for all the games was 3.6 million people, the most live spectators for the whole tournament in the history of the World Cup.

30. Cul-de-___ : SAC
Even though “cul-de-sac” can indeed mean “bottom of the bag” in French, the term cul-de-sac is of English origin (the use of “cul” in French is actually quite rude). It was introduced in aristocratic circles at a time when it was considered very fashionable to speak French. Dead-end streets in France are usually signposted with just a symbol and no accompanying words, but if words are included they are “voie sans issue”, meaning “way without exit”.

35. Part of A.D. : ANNO
The designations Anno Domini (AD, “year of Our Lord”) and Before Christ (BC) are found in the Julian and Gregorian calendars. The dividing point between AD and BC is the year of the conception of Jesus, with AD 1 following 1 BC, without a year “0” in between. The AD/BC scheme dates back to AD 525, and gained wide acceptance soon after AD 800. Nowadays, a modified version has become popular, with CE (Common/Christian Era) used to replace AD, and BCE (Before the Common/Christian Era) replacing BC.

40. M.D.’s reading : EEG
An electroencephalogram is a record of electrical activity caused by the firing of neurons within the brain. The EEG might be used to diagnose epilepsy, or perhaps to determine if a patient is “brain dead”.

63. Blue shade : ANIL
Anil is another name for the indigo plant, as well as the name for the blue indigo dye that is obtained from it. And that blue is relatively close to “navy” blue.

64. Colossal statue outside ancient Rome’s Colosseum : NERO
The Roman Emperor Nero has a large (30m tall) statue made of himself in bronze, which he located outside of his palace. After he died, the bronze was altered and renamed the Colossus Solis, after the Roman sun god. It was later moved and located near the huge amphitheater that became known as the Colosseum. It is likely that the amphitheater actually took its name from the Colossus statue.

65. Church council : SYNOD
The word synod comes from the Greek word for assembly, or meeting. A synod is a church council, usually in the Christian faith.

66. Big name in locks : YALE
The Yale brand name comes from the name of the founder of the original company, Linus Yale Jr. Linus Yale was the inventor of the pin tumbler lock.

Bogotá is the capital city of Colombia. Noted for having many libraries and universities, Bogotá is sometimes called “The Athens of South America”.

Down
1. “___ bleu!” : SACRE
French speakers don’t really use the profanity “sacrebleu”, at least not anymore, but we see it a lot in English literature featuring native French speakers. Most famously it is uttered by Agatha Christie’s delightful Belgian detective, Hercule Poirot. There is some dispute about the origins of “sacreblue” (sacred blue), but French dictionaries explain that it is a “softening” of the alternative “Sacré Dieu” (Holy God).

3. Org. co-founded by W. E. B. Du Bois : NAACP
The full name of the NAACP, the National Association for the Advancement of Colored People, is remarkable in that it actually still uses the old but offensive term “colored people”. The NAACP was founded in 1909, by a group that included suffragette and journalist Mary White Ovington, wealthy socialist William English Walling, and civil rights activist Henry Moscowitz. Another member of the founding group was W. E. B Du Bois, the first African American to earn a doctorate at Harvard University.

4. Bear with a hat : SMOKEY
Smokey Bear is the mascot of the US Forest Service. Smokey first appeared in 1944, in an advertising campaign directed towards preventing forest fires.

8. Goddess whose name is an anagram of her mother’s : HERA
In Greek mythology, Hera was the wife of Zeus and was noted for her jealousy and vengeful nature, particularly against those who vied for the affections of her husband. The equivalent character in Roman mythology was Juno. Hera was the daughter of Cronus and Rhea.

9. Single-celled creatures : AMEBAE
An ameba (or “amoeba” as we spell it back in Ireland) is a single-celled microorganism. The name comes from the Greek “amoibe”, meaning change. The name is quite apt, as the cell changes shape readily as the ameba moves, eats and reproduces.

10. South-of-the-border cry : CARAMBA
“Caramba” is an oath uttered in Spanish. Apparently it’s a softer version of a more vulgar word.

12. Record producer Brian : ENO
Brian Eno started out his musical career with Roxy Music. However, his most oft-played composition (by far!) is Microsoft’s “start-up jingle”, the 6-second sound you hear when the Windows operating system is booting up.

13. Ford Field team, on scoreboards : DET
The Detroit Lions are the NFL team that plays home games at Ford Field in Detroit, Michigan. The team was founded way back in 1929 as the Portsmouth Spartans from Portsmouth, Ohio. The Spartans joined the NFL during the Great Depression as other franchises collapsed. However, the Spartans couldn’t command large enough gates in Portsmouth so the team was sold and relocated to Detroit in 1934.

29. ___ Glendower, last Welshman to hold the title Prince of Wales : OWEN
Owen Glandower ruled Wales in the early 15th century. He united the Welsh against the English invaders and led an unsuccessful revolt that petered out in 1405. After this Glandower effectively disappeared, although it is thought that he lived for about another ten years.

34. France’s Dominique Strauss-___ : KAHN
Dominique Strauss-Kahn was the Managing Director of the International Monetary Fund until May 2011. He resigned his position when facing an accusation by a New York Hotel maid that he had sexually assaulted her. The city of New York dropped the charges when it was determined that the accuser had lied in her statements to a grand jury. Months later Strauss-Kahn admitted to a sexual encounter with the maid but stated that there was no assault.

39. Room with a closet, often : FOYER
“Foyer” is a French word that we’ve imported into English. In French the word is used for what we would call a “green room”, a place where actors can gather when not on stage or on set.

42. Florida getaway locale : ORLANDO
Orlando, Florida was originally called Jernigan, named for the area’s first permanent settler, Aaron Jernigan. Apparently the name was changed to Orlando in memory of a soldier who died in the Second Seminole War, one Orlando Reeves.

47. Roulette bet : ODD
The name “roulette” means “little wheel” in French, and the game as we know it today did in fact originate in Paris, in 1796.

51. Singer Lavigne : AVRIL
Avril Lavigne is a Canadian musician. She was the youngest female solo artist to reach number one in the charts in the UK, which she did at 17 years of age in 2002 with her debut album “Let Go”.

53. In ___ (unborn) : UTERO
“In utero” is a Latin term meaning “in the uterus”. The Latin “uterus” translates as both “womb” and “belly”. The Latin word was derived from the Greek “hystera” also meaning womb, which gives us the words “hysterectomy”, and “hysterical”.

54. Sidewalk vendors’ offerings : GYROS
A gyro is a traditional Greek dish, a sandwich made with pita bread containing meat, tomato, onion and tzatziki (a yogurt and cucumber sauce). The meat for gyros is usually roasted on a tall vertical spit, and is sliced from the spit as required. The name “gyro” comes from the modern Greek word “gyros” meaning “circle”, a reference to the meat turning as it is grilled, in a rotating circular motion.

56. Parent company of Shopping.com : EBAY
Shopping.com is one of those comparison shopping websites. It allows you to compare prices for the same product at many different online retailers. It’s very useful for those of us who prefer online shopping to visiting a brick and mortar store.