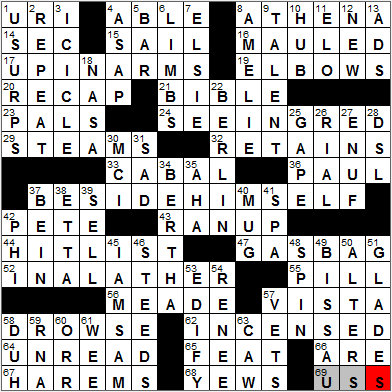 CROSSWORD SETTER: Patrick Berry
There’s a note with today’s puzzle!
“CROSS” WORD CONTEST — All the puzzles this week, from Monday to Saturday, have been created by one person, Patrick Berry. Have your solutions handy, because the Saturday puzzle conceals a meta-challenge involving the solution grids of all six. When you have the answer to the meta-challenge, mail it to: crossword@nytimes.com. Twenty-five correct solvers, chosen at random, whose entries are received by 6:00 p.m. E.T. Sunday, Oct. 23, will receive copies of “Will Shortz Picks His Favorite Puzzles: 101 of the Top Crosswords From The New York Times.” Only one entry per person, please. The answer and winners’ names will appear on Friday, Oct. 28, at Wordplay.
THEME: The cross … each of the theme clues starts with the words, “The cross …”:


Today’s Wiki-est, Amazonian Googlies
Across
1. Swiss canton : URI
Supposedly William Tell came from Uri, a canton in the German part of Switzerland. Altdorf is the capital of Uri and is the city where William Tell shot the apple off his son’s head, according to legend.

8. Parthenon dedicatee : ATHENA
The most recognizable building that stands on the Acropolis in Athens is the Parthenon, also known as the Temple of Athena.

21. Book that might contain birth records : BIBLE
A Family Bible is a Bible that is handed down in a family from generation to generation. The tradition is that family members record important genealogical information in the Family Bible, including letters and photographs. I’m an amateur genealogist and have never come across one in my own research, but I sure would love to do so!

33. Group with revolutionary ideas : CABAL
A cabal is a small group of secret plotters, perhaps scheming against a government or an individual.

36. Author of several New Testament epistles : PAUL
St. Paul the Apostle wrote thirteen epistles, all of which are found in the New Testament of the Bible (although authorship of some is disputed).

37. The cross man who’d been cloned was … : BESIDE HIMSELF
Dolly is the most famous sheep in the world. She was a clone, and was born in 1996 near Edinburgh in Scotland, grown from a cell taken from the mammary gland of a healthy donor sheep. When asked why she was called Dolly, the scientist responsible said, and I quote:

56. Gettysburg general : MEADE
George Meade was a career army officer with a depth of experience in civil and military operations even before the onset of the Civil War. During the war he rose to the level of commander of the Army of the Potomac, and is best remembered for leading the Union forces that defeated General Robert E. Lee at Gettysburg in 1863.

66. Jimi Hendrix’s “___ You Experienced?” : ARE
Many of his contemporaries regarded Jimi Hendrix as the greatest electric guitarist in the history of rock music. Hendrix was from Seattle, and didn’t really have a really stellar start to his working life. He didn’t finish high school, and fell foul of the law by getting caught in stolen cars, twice. The courts gave him the option of the army or two years in prison. Hendrix chose the former, and soon found himself in the famous 101st Airborne. In the army, his less-than-disciplined ways helped him (as he would have seen it) because his superiors successfully petitioned to get him discharged after serving only one year of his two-year requirement, just to get him out of their hair.

67. Muslim palace divisions : HAREMS
“Harem” is a Turkish word, derived from the Arabic for “forbidden place”. Traditionally a harem was the female quarters in a household in which a man had more than one wife. Not only wives (and concubines) would use the harem, but also young children and other female relatives. The main point was that no men were allowed in the area.

68. English churchyard trees : YEWS
Yew trees were placed around churches and in graveyards all over Europe. The reason for the practice seems to be unclear, but one suggestion is that fronds from yew trees were used as substitutes for palms on Palm Sunday.

Down
5. Object from Mars? : BAR
Having lived on both sides of the Atlantic, I find the Mars Bar to be the most perplexing of candies! The original Mars Bar is a British confection (and delicious) first manufactured in 1932. The US version of the original Mars Bar is called a Milky Way. But there is candy bar called a Milky Way that is also produced in the UK, and it is completely different to its US cousin, being more like an American “3 Musketeers”. And then there is an American confection called a Mars Bar, something different again. No wonder I gave up eating candy bars …

7. Milk carton mascot : ELSIE
Elsie the Cow is the mascot of the Borden Company. Elsie first appeared at the New York World’s Fair in 1939, introduced to symbolize the perfect dairy product. Elsie was also given a husband, Elmer the Bull, who eventually moved over to the chemical division of Borden where he gave his name to Elmer’s Glue.

8. Whimsical 2001 film set in Paris : AMELIE
“Amélie” is a French film, a romantic comedy about a shy waitress in Montmartre, Paris played by Audrey Tatou. The movie was originally released under the French title, “Le Fabuleux Destin d’Amélie Poulain” (“The Fabulous Destiny of Amélie Poulain”).

9. Currency unit in the 21-Across : TALENT
The talent was a unit of currency (as well as a unit of mass). It was mentioned in the Bible in Jesus’s parable of the talents. In fact, this parable is the origin of our word “talent” used to mean “gift, skill”.

11. “Rockaria!” band, for short : ELO
ELO of course stands for the Electric Light Orchestra, a symphonic rock group from the north of England. The band’s manager was Don Arden, father of Sharon Osbourne (wife of Ozzy).

If you listen to ELO’s “Rockaria”, off the 1976 album “A New World Record”, you’ll hear an “oops”. The introduction to the track features an opera singer who starts the vocals too early in the first take. The band decided to use that first take anyway, complete with the singer saying “oops”.

13. Net surfer’s annoyances : ADS
You’ll see a few “Ads by Google” around the edges of this blog. They help to cover the costs of publication. Google collects “ad space” from site owners like me, and then sells that space to advertisers. When someone clicks on an ad, Google collects a small fee from the advertiser (usually fractions of a penny). Whatever is collected, Google splits with the site owner. At fractions of a penny per click, I won’t be getting too rich from the scheme …

18. Grp. that sends things up : NASA
The Soviet Union launched the Sputnik satellite towards the end of 1957, a development that shocked the establishment in the US. Within months, President Eisenhower made his move, creating the Advanced Research Projects Agency (ARPA, now DARPA) and the National Aeronautics and Space Administration (NASA).

22. Once-divided city : BERLIN
I once worked for a man who, when serving with the US Army, had the job of filming the construction of the Berlin Wall in the early sixties. Starting in 1952, the border between East And West Germany was strictly controlled, with the help of fences and walls running over 850 miles from the Baltic Sea to Czechoslovakia. There was a big “gap” in the restrictive barrier, in the divided city of Berlin. Restrictions of movement in between East and West in the city were very lax for most of the fifties (you could take a subway train “under” the border, for example), and the Berlin became a gateway for emigration, almost exclusively from East to West. In August 1961, under orders from Nikita Krushchev in Moscow, East Germany closed the border in Berlin, and construction started on the fortified wall.

26. Iranian coin : RIAL
The “Rial” is name of the currency of Iran (as well as Yemen, Oman, Cambodia and Tunisia!).

27. Adequately, to Li’l Abner : ENUF
“Li’l Abner” was created and drawn by Al Capp for over 43 years starting in 1934. Al Capp stopped producing the strip in 1977, largely due to illness (he died from emphysema two years later). As the strip finished up, he went so far as to apologize to his long-standing fans, saying that he should have stopped 3-4 years earlier as he felt that the quality of his work had gone down in those latter years.

28. ___ modem : DSL
DSL originally stood for Digital Subscriber Loop, but is now accepted to mean (Asymmetric) Digital Subscriber Line. DSL is the technology that allows Internet service be delivered down the same telephone line as voice service, by separating the two into different frequency signals.

30. Company acquired by Verizon in 2006 : MCI
MCI was a giant telecom company that suffered a similar fate to Enron, around about the same time. MCI’s stock price fell in 2000 and in maneuvers designed to protect the price, the company committed illegal acts. The larger-than-life CEO back then, Bernie Ebbers, is now serving a 25-year sentence in Louisiana.

34. Big ___ (German W.W. I cannon) : BERTHA
Big Bertha was a very large-bore howitzer developed for the German military just prior to WWI. The shell that the gun fired weighs over 1800 lbs.

37. 1960s hippie event : BE-IN
Just before 1967’s Summer of Love in the Haight-Ashbury district of San Francisco, a Human Be-In was held in the city’s Golden Gate Park. The Be-In is described as a “happening”, a gathering triggered by a new state law banning the use of LSD. The name “Human Be-In” is a play on “humanist sit-in”.

38. James of jazz : ETTA
Etta James is best known for her beautiful rendition of the song “At Last”. Sadly, as she discloses in her autobiography, James has lived a life that has been ravaged by drug addiction, leading to numerous legal and health problems.

41. It might make you sweat : SPA
The word “spa” migrated into English from Belgium, as Spa is the name of a health resort there. The name “Spa” comes from the Walloon word “espa” meaning “spring, fountain”.

45. 2001 drama whose title is taken from “Green Eggs and Ham” : I AM SAM
“I Am Sam” is a 2001 drama movie starring Sean Penn. Penn plays a man, with a developmental disability, raising a young daughter alone after her mother abandoned the family.

49. Guinea-___ (West African nation) : BISSAU
The Republic of Guinea-Bissau is in West Africa, bordered by the countries of Senegal and Guinea. The country was a Portuguese colony for centuries under the name Portuguese Guinea. When independence was granted in 1974, the name Guinea-Bissau was chosen for the new country, as Bissau is the nation’s capital. The double-barrelled name helps to prevent confusion with the neighboring Republic of Guinea.

53. Impart pearls of wisdom to : EDIFY
“To edify” is to provide instruction in order to improve spiritually, morally or intellectually. The intent is to “build up” someone’s faith or morality. “Edify” comes from the Latin “aedificare” meaning “to build, construct”, which is also the root for our word “edifice”.

59. Molecule involved in protein synthesis : RNA
Ribonucleic Acid (RNA) is an essential catalyst in the manufacture of proteins in the body. The genetic code in DNA determines the sequence of amino acids that make up each protein. Amino acids are delivered in the correct sequence by what is called transfer RNA and then formed into proteins by ribosomal RNA.

60. Boston Garden legend Bobby : ORR
Bobby Orr is regarded as one of the greatest hockey players who ever played the game. By the time he retired in 1978 he had undergone over a dozen knee surgeries. At 31 years of age, he concluded that he just couldn’t skate any more. Reportedly, he was even having trouble walking …