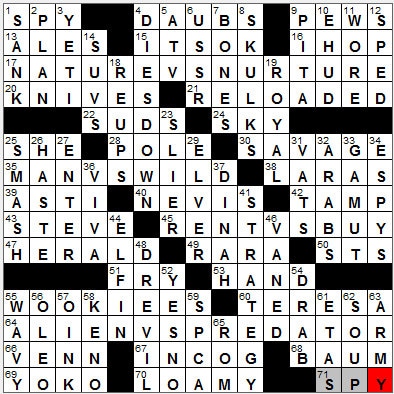 CROSSWORD SETTER: Jeff Chen
THEME: SPY VS SPY … the puzzle starts and ends with a reference to the “Mad” magazine comic strip “Spy vs Spy”, and all of the theme answers are in the format A vs B:

4. Slaps on : DAUBS
“To daub” is to coat a surface with something thick and sticky, like say plaster or mud.

13. Some round components : ALES
Where I grew up in Ireland, the concept of “buying a round” of drinks is very much part of our culture, with each person taking turns almost religiously. When it is someone’s turn to buy the next round, that person will often say “it’s my shout”.

17. Genetics-or-environment debate : NATURE VS NURTURE
“Nature versus nurture” is a constant debate in our house, with me holding the (minority!) view that, as a person is growing up, one’s environment has a stronger influence than we tend to give credit as a society.

28. Decathlete’s implement : POLE
The decathlon event is a track and field competition, with the name “decathlon” coming from the Greek “deka” (ten) and “athlos” (contest). The ten events in the men’s decathlon are:

35. Discovery Channel survival show : MAN VS WILD
“Man vs. Wild” is a British survival show hosted by the very erudite Bear Grylls. Grylls’ real name is Edward Grylls, and he had a very priviliged upbringing. He was the son of a knighted politician and attended the prestigious Eton College outside London. He joined the British Army and made it into the UK Special Forces Reserve. He survived a parachuting accident in 1996 which crushed three vertebrae, resulting in him spending 18 months in rehabilitation. When he got well again, he climbed Mount Everest.

38. “___ Theme” (1965 soundtrack tune) : LARA’S
The very lovely “Lara’s Theme” is a leitmotif written for the 1965 movie “Doctor Zhivago” by Maurice Jarre. Lara is the name of the character played by the wonderful Julie Christie. The theme was later incorporated into a hit song with the title “Somewhere My Love”.

39. Piedmont wine town : ASTI
Asti is in the Piedmont region of northwestern Italy. It is perhaps most famous for its Asti Spumante sparkling white wine.

40. Neighbor of St. Kitts : NEVIS
Nevis is an island in the Caribbean Sea, which along with the island of Saint Kitts makes up the Federation of Saint Kitts and Nevis. At the center of Nevis is a volcano, called Nevis Peak. Apparently the clouds at the top of this peak reminded someone of snow, so the island was given the Spanish name “Nuestra Señora de las Nieves” (Our Lady of the Snows). The name “Nevis” then comes from “nieves”, the word for “snow”.

42. Pack down : TAMP
“Tamp” means to pack down tightly by tapping. “Tamp” was originally used to specifically describe the action of packing down sand or dirt around an explosive prior to detonation.

Steve Jobs certainly is a business icon in Silicon Valley. I don’t think it is too surprising to learn that Jobs didn’t finish his college education, dropping out of Reed College in Oregon after only one semester.

50. Bourbon and Beale: Abbr. : STS
When New Orleans was founded, the House of Bourbon was ruling France. Bourbon Street was named in its honor.

Beale Street in downtown Memphis, Tennessee is a major tourist attraction. In 1977, by act of Congress, the street was officially declared the “Home of the Blues” due to its long association with the musical genre.

55. Chewbacca and kin : WOOKIEES
Wookiees are a biped race featured in “Star Wars”, the most notable being Chewbacca, the loyal friend and associate of Han Solo.

60. Saint of Ávila : TERESA
St. Teresa of Ávila (also known as St. Teresa of Jesus) was a Carmelite nun living in Spain in the 1500s. She is particularly noted for her writings on Christian meditation and mental prayer.

64. 2004 movie featuring a clash of sci-fi species : ALIEN VS PREDATOR
“Alien vs. Predator” is a whole franchise of movies and video games built around a 2004 film. The movie itself had its roots in the earlier features “Alien” (excellent!) and “Predator” (awful!).

66. ___ diagram (logic illustration) : VENN
Englishman John Venn was an expert in the field of logic, and introduced the Venn diagram in his book “Symbolic Logic” in 1881. Venn diagrams are used in Set Theory, to illustrate the logical relationships between sets of variables.

67. Wearing a disguise, informally : INCOG
“Incog” is short for “incognito”, the Italian for “unknown”.

68. Oz creator : BAUM
L. Frank Baum (the “L” is for Lyman) was of course famous for writing “The Wonderful Wizard of Oz”. Writing at the turn of the century, Baum actually described in his books things that had yet to be invented, like television, laptop computers and wireless telephones.

69. John Lennon’s “Dear ___” : YOKO
Yoko Ono was born into a prosperous Japanese family, and is actually a descendant of one of the emperors of Japan. Her father moved around the world for work, and she lived the first few years of her life in San Francisco. The family returned to Japan, before moving on to New York, Hanoi and back to Japan just before WWII, in time to live through the great fire-bombing of Tokyo in 1945. Immediately after the war, the family was far from prosperous. While Yoko’s father was being held in a prison camp in Vietnam, her mother had to resort to begging and bartering to feed her children. When her father was repatriated, life started to return to normal and Yoko was able to attend university. She was the first woman to be accepted into the philosophy program of Gakushuin University.

Down
3. Hairy legend : YETI
A yeti is a beast of legend, also called an abominable snowman. “Yeti” is a Tibetan term, and the beast is fabled to live in the Himalayan regions of Nepal and Tibet. Our equivalent legend in North America is that of Bigfoot. The study of animals whose existence have not yet been substantiated is called cryptozoology.

5. Off-roader, for short : ATV
An all terrain vehicle.

6. “Evil empire” initials : USSR
It was President Ronald Reagan who first used the term “evil empire” to describe the Soviet Union in the days of the Cold War.

9. Falafel holder : PITA
Falafel is a fried ball of ground chickpeas or fava beans served in pita bread. I love chickpeas, but falafel just seems too dry to me.

Pita is a lovely bread in Middle-Eastern and Mediterranean cuisines. It is usually round, and has a “pocket” in the center. The pocket is created by steam that puffs up the dough during cooking, leaving a void when the bread cools. The pockets were a big hit in the seventies when someone came up with the idea of using them for fillings and creating pita sandwiches or “pita pockets”.

10. Israel’s Olmert : EHUD
Ehud Olmert took over as Acting Prime Minister when Ariel Sharon suffered a severe stroke early in 2006. He then led his party to victory in a general election held later that same year. He held Israel’s highest office in his own right until 2009, when he had to step down facing allegations of corruption.

29. Young migratory fish : ELVER
The Sargasso Sea, an area within the Atlantic Ocean, is famous for being home to many species of Sargassum, the algae floating on the surface that gives the area its name. The Sargasso Sea is also where both the European and American eels lay their eggs and hatch their young. The young eels (or “elvers”) then head east or west, depending on the species.

32. Many Semites : ARABS
The word “Semitic” comes from the Greek for Shem, one of the three sons of Noah. A Semite is a one of a large list of peoples, from the Assyrians and Babylonians to the Hebrews.The term “anti-Semite” however, almost always refers to anti-Jewish sentiment.

33. Full range : GAMUT
In medieval times, the musical scale was denoted by the notes “ut, re, mi, fa, sol, la”. The term “gamma ut”, shortened to “gamut”, was used to describe the whole scale. By the 1620s, “gamut” was being used to mean the entire range of anything, the whole gamut.

34. Cable TV sports awards : ESPYS
The ESPY Awards are a creation of the ESPN sports television network. One difference with similarly named awards in the entertainment industry is that ESPY winners are chosen solely based on viewer votes.

37. Washington of jazz : DINAH
Dinah Washington was the stage name of the blues and jazz singer Ruth Lee Jones. Apparently when she was once performing at the famed London Palladium she announced (with Queen Elizabeth sitting in the Royal Box), “There is but one Heaven, one Hell, one queen, and your Elizabeth is an impostor.” That would have created a bit of a stir …

48. Austin Powers foe : DR EVIL
The character of Austin Powers was created by the actor who plays him, Mike Myers. Apparently Myers came up with the idea for Powers while listening to the Burt Bacharach song “The Look of Love”.

56. Land O’Lakes product : OLEO
Emperor Louis Napoleon III of France announced a competition to develop a substitute for butter, a substitute that would be more accessible to the lower classes and more practical for the armed forces. A French chemist called Hippolyte Mege-Mouries came up with something he called oleomargarine in 1869, which was eventually manufactured under the trade name “margarine”. The name “oleomargarine” also gives us our generic term “oleo”.

57. “Old MacDonald” sound : OINK
There was an American version of the English children’s song “Old MacDonald Had a Farm” (E-I-E-I-O), that was around in the days of WWI. The first line of the US version goes “Old Macdougal had a farm, in Ohio-i-o”.

58. Popular bar game : KENO
The name “Keno” has French or Latin roots, with the French “quine” being a term for five winning numbers, and the Latin “quini” meaning “five each”. However, the game itself originated in China. It was introduced to the West by Chinese immigrants who were working on the first Transcontinental Railroad, in the 1800s.

59. Adoption advocacy org. : SPCA
Unlike in other countries, there is no “umbrella” organization in the US with the goal of preventing cruelty to animals. Instead there are independent organizations set up all over the nation using the name SPCA. Having said that, there is an American Society for the Prevention of Cruelty to Animals (ASPCA) that was originally intended to operate across the country, but really it now focuses its efforts in New York City.

65. CD-___ : ROM
CD-ROM stands for “compact disc read only memory”. That means you can read information from the disc (like a standard music CD for example), but you cannot write to it. You can also buy a CD-RW, which stands for “compact disc – rewritable”, with which you can read data and also write over it multiple times using a suitable CD drive.