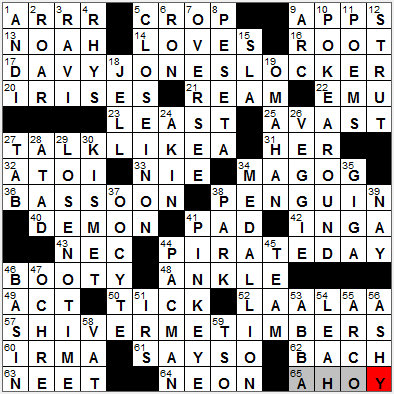 
Today’s Wiki-est, Amazonian Googlies
Across
13. Ark builder : NOAH
Genesis 6:19-20 states that Noah was instructed to take two animals of every kind into the ark. Later, in Genesis 7:2-3, Noah was instructed to take on board “every clean animal by sevens … male and female, to keep offspring alive on the face of all the earth”. Apparently “extras” (7 rather than 2) were needed for ritual sacrifice.

17. Where plank-walkers end up on 27-/44-Across : DAVY JONES’ LOCKER
No one is really sure why “Davy Jones’s Locker” is used to refer to the bottom of the sea, but the first known reference to the idiom was made in “The Adventures of Peregrine Pickle” published in 1751, written by Scottish author Tobias Smollett. It is clear however, that Davy Jones is a euphemism for the devil or god of the seas.

22. Big bird Down Under : EMU
The emu has had a tough time in Australia since man settled there. There was even an “Emu War” in Western Australia in 1932 when migrating emus competed with livestock for water and food. Soldiers were sent in and used machine guns in an unsuccessful attempt to drive off the emus. The emus were clever, breaking their usual formation and adopting guerrilla tactics, operating as smaller units. After 50 days of “war”, the military withdrew. Subsequent requests for military help for the farmers were ignored. The emus had emerged victorious …

25. “Hold it!,” on 27-/44-Across : AVAST
Avast is a nautical term, used to tell someone to stop or desist from what they are doing. The word comes from the Dutch “hou vast” meaning “hold fast”.

27. With 44-Across, annual celebration on 9/19 : TALK LIKE A
44. See 27-Across : PIRATE DAY
International Talk Like a Pirate Day is September 19th every year, a “holiday” that was created in 1995. The event started out as an inside joke between John Baur and Mark Summers of Albany, Oregon, but when they shared the notion with the columnist Dave Barry, he promoted the idea and it took off.

32. Yours, in Tours : A TOI
“À toi” is the French term for “yours”, when talking to someone with whom one is familiar. “À toi” literally means “to you”.

Nürnberg (anglicized as Nuremberg) is a Bavarian city located north of Munich. Historically it is remembered for the huge Nazi Nuremberg rallies, and the Nuremberg trials that took place at the end of WWII. Nürnberg is sometimes confused with the city of Nürburg in the western part of Germany, famous for the Nürburgring race track.

34. Gog and ___ (enemies of God, in Revelation) : MAGOG
Gog and Magog are names that appear in the Jewish, Christian and Muslim scriptures. In the Book of Revelation, Gog and Magog are representations of nations that have banded together to destroy God and his followers.

36. Deep-toned woodwind : BASSOON
Our modern bassoon first appeared in the 1800s and has had a place in the concert orchestra ever since then.

38. Bird in a “tuxedo” : PENGUIN
Penguins are of course found living in Antarctica, but not exclusively so. The Galapagos Penguin lives close to the equator, and is in fact found in the northern hemisphere.

42. Actress Swenson of “Benson” : INGA
Inga Swenson is an American actress. Her best known role was “Gretchen Kraus”, the German cook and later housekeeper on the TV show “Benson”. Swenson also appeared in a couple of episodes of “Bonanza” playing the second wife of Ben Cartwright (Lorne Greene), and mother of Hoss Cartwright (Dan Blocker). This was despite the fact that in real life she was actually 4 years younger than Blocker!

43. Asian electronics giant : NEC
NEC is the name that the Nippon Electric Company chose for itself outside of Japan after a re-branding exercise in 1983.

46. Treasure on 27-/44-Across : BOOTY
“Booty”, meaning plunder or profit, is derived from the Old French word “butin” which has the same meaning.

52. Playmate of Tinky Winky, Dipsy and Po : LAA-LAA
“Teletubbies” is a children’s television show produced by the BBC in the UK and shown over here on PBS. The show attracted a lot of attention in 1999 when Jerry Falwell suggested that one of the Teletubbies characters, Tinky Winky, was a homosexual role model for children.

57. “I don’t believe it!,” on 27-/44-Across : SHIVER ME TIMBERS
“Shiver me timbers” isn’t something a real pirate would have said, but rather is a phrase commonly used by fictional pirates. It first shows up in literature in the book “Jacob Faithful” published in 1835, written by Frederick Marryat.

61. Ultimate authority : SAY-SO
To have the say-so is to have the authority to decide something, to hold sway.

62. “The Art of Fugue” composer : BACH
Johann Sebastian Bach raised a very large family. He had seven children with his first wife, who died suddenly. He had a further thirteen children with his second wife. Of his twenty youngsters, there were four sons who became famous musicians in their own right:

63. Onetime competitor of Nair : NEET
The hair removal product “Neet” was launched in Canada in 1901, and was also sold as “Immac”. Today it is sold under the name “Veet”.

64. Glowing gas : NEON
The basic design of neon lighting was first demonstrated at the Paris Motor Show in 1910. Such lighting is made up of glass tubes containing a vacuum into which has been introduced a small amount of neon gas. When a voltage is applied between two electrodes inside the tube the neon gas “glows”, giving off the familiar light.

Down
3. Sitar player Shankar : RAVI
Ravi Shankar is perhaps the most famous virtuoso (to us Westerners) from the world of Indian classical music, and is noted for his sitar playing. Also, Shankar is the father of the beautiful popular singer Norah Jones.

4. John ___-Davies of the “Lord of the Rings” trilogy : RHYS
John Rhys-Davies is a Welsh actor with a marvelous, booming voice. I always think of him playing the very likable Arab excavator in the “Indiana Jones” series of films. He also played Gimli in the “The Lord of the Rings” movies, and provided the voice for the Ent known as Treebeard.

8. Onetime money in Spain : PESETA
The peseta is the former currency of Spain, replaced by the euro in 2002.

11. Sonnets and haikus : POEMS
A sonnet is a short poem with varying rhyming schemes, but always with 14 lines. The sonnet form has been around at least since the 13th century.

A haiku is a very elegant form of Japanese verse. When writing a haiku in English we tend to impose the rule that the verse must contain 17 syllables. This restriction comes from the rule in Japanese that the verse must contain 17 sound units called “moras”, but moras and syllables aren’t the same thing. What the difference is though, is not so clear to me …

15. 1970s radical org. : SLA
The Symbionese Liberation Army (SLA) was founded in 1973 by an escapee of the prison system, Donald DeFreeze. The group’s manifesto promoted the rights of African Americans although, in the 2-3 year life of the group, DeFreeze was the only black member. Famously, the SLA kidnapped heiress Patty Hearst in 1974.

27. Key on the far left of a keyboard : TAB
Like most features on our computer keyboards, the tab key is a hangover from the days of typewriters. When using a typewriter, making entries into a table was very tedious, involving lots of tapping on the space bar and the backspace key. So a lever was added to typewriters that allowed the operator to “jump” across the page to positions that could be set by hand. Later this lever was simplified to a tab key which could be depressed, causing the carriage to jump to the next tab stop in much the same way that the modern tab key works on a computer.

28. Not much : A TAD
Back in the 1800s “tad” was used to describe a young child, and this morphed into our usage meaning a small amount in the early 1900s. The original use of “tad” for a child is very likely a shortened version of “tadpole”.

37. Immature egg cell : OOCYTE
An oocyte is a cell from which an egg develops in the ovary.

44. Dot-chomping character in a classic arcade game : PAC-MAN
The Pac-Man arcade game was first released in Japan in 1980 and is as popular today as it ever was, at least in some circles. The game features characters that are maneuvered around the screen to eat up dots and earn points. The name comes from the Japanese folk hero “Paku”, known for his large appetite.

47. Autumn hue : OCHRE
Ochre is often spelled “ocher” in the US (it’s “ochre” where I come from). Ocher is a light, yellowy brown color, although variations of the pigment are possible, such as red ocher and purple ocher.

53. “Mamma Mia” group : ABBA
I am an unapologetic fan of ABBA’s music. ABBA was of course the Swedish group that topped the charts in the seventies and eighties. The name ABBA is an acronym formed from the first letters of the given names of each of the band members, namely: Agnetha, Benny, Bjorn and Anni-Frid.

55. California-based oil giant : ARCO
ARCO stands for the Atlantic Richfield Company. One of ARCO’s claims to fame is that it is responsible for the nation’s largest Superfund site. Mining and smelting in the area around Butte, Montana polluted the region’s water and soil, and ARCO have agreed to pay $187 million to help clean up the area.

59. General on a Chinese menu : TSO
General Tso’s chicken is an American creation, often found on the menu of a Chinese restaurant. The name General Tso may be a reference to General Zuo Zontang of the Qing Dynasty, but there is no clear link.