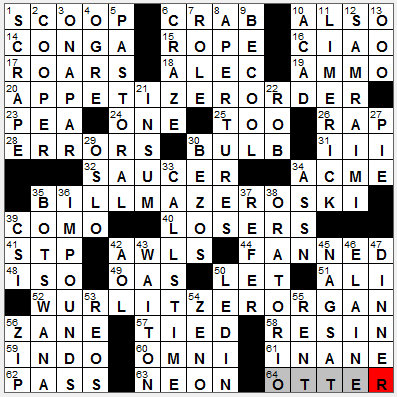 CROSSWORD SETTER: Stanley Newman
THEME: ZIP … the letters ZERO are hidden in each of the theme answers, and if you count them, there are an impressive 24 occurrences of “O” in the grid:

14. Cuban “line” dance : CONGA
The conga line is a dance that originated as a Cuban carnival march. It became popular in the US starting in the thirties. The dance is apparently named after the Congo region of Africa, and it was originated by slaves who were brought from there to Cuba.

16. Italian “bye” : CIAO
“Ciao” is the Italian for “bye”. “Arrivederci” is more formal, and translates better as “goodbye”.

18. Baldwin of “30 Rock” : ALEC
Alec is the oldest of the acting Baldwin brothers. I think his big break was playing Tom Clancy’s Jack Ryan in “The Hunt for Red October”, but thank goodness that role was taken over by Harrison Ford for the subsequent Jack Ryan movies. Baldwin is making a name for himself these days playing Jack Donaghy on “30 Rock”, opposite Tina Fey.

20. Buffalo wings or bruschetta, e.g. : APPETIZER ORDER
There are a few stories about how Buffalo wings were first developed, most of them related to the Anchor Bar in Buffalo, New York. If you’re looking for Buffalo wings on a menu in Buffalo, you’ll note that there in and around the city they’re just referred to as “wings”.

In Italy the word “bruschetta” is pronounced differently than most people tend to pronounce the same word here in the US. We should be saying “broo-sketta” and not “broo-shetta”.

24. Formula ___ racing : ONE
In motor racing, the designation “formula” is a set of rules that all participants and cars must abide by. The definition of “Formula One” was agreed back in 1946, with the “one” designating that it is the most advanced of the “formulae”, and the most competitive.

30. Sylvania product : BULB
The company that eventually developed the Sylvania brand of light bulbs started out in the early 1900s. Sylvania originally collected burnt-out light bulbs and refurbished then (how green is that??!!).

34. High point : ACME
The “acme” is the highest point, coming from the Greek word “akme” which has the same meaning.

39. Perry with the 1956 #1 hit “Hot Diggity” : COMO
Perry Como is still my mother’s favorite singer. Como was born about 20 miles from Pittsburgh, Pennsylvania. Famously, his first career was barbering. He learned the trade from a local hairdresser and soon had his own shop in a Greek coffee house, at the age of 14!

49. W. Hemisphere alliance : OAS
The Organization of American States (OAS) has its headquarters in Washington, D.C. All the independent states in the Americas are members of the group, except Honduras which had its membership suspended after the country’s 2009.

51. “___ Baba and the 40 Thieves” : ALI
There is some controversy about the story “Ali Baba and the Forty Thieves” in that it has been suggested it was not part of the original collection of Arabic tales called “One Thousand and One Nights”. The suggestion is that it was added by one of its European translators.

56. Western writer Grey : ZANE
Zane Grey sure did hit on the right niche. He wrote romanticized western novels and stories that really lent themselves to the big screen in the days when westerns were very popular movies. Incredibly, 110 films were made based on his work.

58. Source of amber : RESIN
Amber’s technical name is “resinite”, reflecting its composition and formation. Amber starts out life as soft sticky tree resin but then under high temperature and pressure from overlying layers of soil, it fossilizes. The sticky resin can trap organisms or other plant matter, and this material can sometimes remain virtually intact inside the amber fossil, a unique gift from the past.

2. “The Last of the Mohicans” author : COOPER
James Fenimore Cooper’s most famous works are his collection of historical novels known as the “Leatherstocking Tales” featuring the hero Natty Bumppo, and his romantic novel “The Last of the Mohicans”. James Fenimore was the son of William Cooper, a US Congressman. The Cooper family lived in Cooperstown, New York, a community actually founded by James’s father, William Cooper.

4. Shrek, for one : OGRE
Before “Shrek” was a successful movie franchise and Broadway musical, it was a children’s picture book called “Shrek!” authored and illustrated by William Steig. The title “Shrek!” came from the German/Yiddish word Schreck, meaning “fear” or “terror”.

8. Camera openings : APERTURES
Varying the f-stop in a lens varies how big the lens opening (the aperture) is when the photograph is taken. Smaller apertures (higher f-stop values) admit less light, but result in sharper photographs.

11. Verse often beginning “There once was a …” : LIMERICK
No one knows for sure how the verse known as a limerick got its name, although there does seem to be agreement that the name does indeed come from the city or county of Limerick in Ireland.

12. “Spider-Man” series director : SAM RAIMI
Sam Raimi is a very successful director and producer, responsible for the “Spiderman” series of films among others, and TV series such as “Xena: Warrior Princess”.

13. Tic-tac-toe victory : OOO
When I was growing up in Ireland, we played “noughts and crosses” … our name for tic-tac-toe.

29. Norway’s capital : OSLO
Oslo is an ancient city, founded around 1048. The medieval city was destroyed by fire in 1624 and was rebuilt by the Danish-Norwegian King Christian IV and renamed Christiana. In 1877, there was an official change of the name’s spelling to “Kristiana”, and then more recently in 1925 the name was restored to the original Oslo. Things have gone full circle, as the center of Oslo, the area that would have been contained by the original medieval walls, has recently been named Christiana again.

30. Jeff who founded Amazon.com : BEZOS
As founder of the superb enterprise Amazon.com, Jeff Bezos is an incredibly rich man. Having said that, his salary in 2010 was just a little over $80,000. Compare that with the cost of his personal security detail which was $1.6 million!

38. Handel’s “Messiah,” e.g. : ORATORIO
George Frideric Handel was the King of the oratorio. His most famous oratorio, “Messiah” was actually performed first in Dublin, Ireland, back in 1742.

39. CBS forensic series : CSI
The TV show “CSI” gets a lot of criticism from law enforcement agencies for its unrealistic portrayal of the procedures and science of criminal investigation. I don’t care though, as I just think it’s fun television. The original “CSI” set in Las Vegas seems to have “gone off the boil”, but the addition of Sela Ward to the cast of “CSI: NY” has really, really raised the level of the sister show centered around New York City.

42. Time Warner spinoff of ’09 : AOL
Founded as Quantum Computer Services in 1983, the company changed its name in 1989 to America Online. As the company went international, the acronym AOL was used in order to shake off the “America-centric” sound to the name. During the heady days of AOL’s success, the company could not keep up with the growing number of subscribers, so people trying to connect often encountered busy signals. That’s when users called AOL “Always Off-Line”.

AOL’s initial, Initial Public Offering was in 1992. Years later the company was picked up by Time Warner (not a great investment for Time Warner, it turned out). AOL was spun off as a separate entity again in 2009 and the new company had a “second” IPO that same year.

46. Jerry’s ex on “Seinfeld” : ELAINE
The character of Elaine Benes, unlike Jerry, Kramer and George, did not appear in the pilot episode of “Seinfeld”. NBC executives specified the addition of a female lead when they picked up the show citing that the situation was too “male-centric”.

53. Old-fashioned Speed Wagons : REOS
The REO Motor Company was founded by Ransom E. Olds (hence the name REO). The company made cars, trucks and buses, and was in business from 1905 to 1975 in Lansing, Michigan.

54. Greek philosopher known for paradoxes : ZENO
Zeno of Elea was a Greek philosopher, who lived in Elea, a Greek colony in Southern Italy. He is famous for his “paradoxes”, a set of problems that really make you think! In the problem known as Achilles and the Tortoise, Zeno tells us that Achilles races a tortoise, giving the tortoise a head start (of say 100 meters). By the time Achilles reaches the starting point of the tortoise, the tortoise will have moved on, albeit only a small distance. Achilles then sets his sight on the tortoise’s new position and runs to it. Again the tortoise has moved ahead a little. Achilles keeps on moving to the tortoise’s new position, but can never actually catch his slower rival, or can he …?