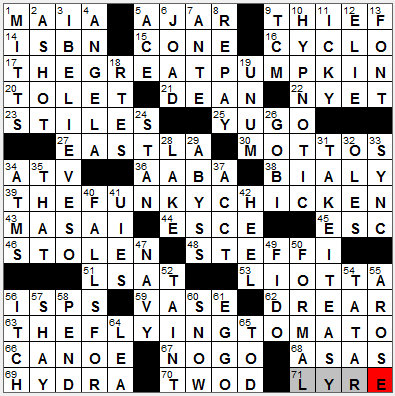 CROSSWORD SETTER: Tony Orbach
THEME: Soup! … all of the answers end with a flavor of soup:
17A. “Peanuts” figure … or some fabulous fall soup? : THE GREAT PUMPKIN
39A. Early 1970s dance … or some smelly soup? : THE FUNKY CHICKEN
63A. Nickname for snowboarder Shaun White … or some airborne soup? : THE FLYING TOMATO
COMPLETION TIME: 9m 46s
ANSWERS I MISSED: 0

1. One of the Pleiades : MAIA
The Seven Sisters of Greek mythology are also known as the Pleiades. The Seven Sisters were the daughters of the titan Atlas, who had been forced to carry the heavens on his shoulders. In an act of kindness, Zeus transformed the sisters first into doves, and then into stars so that they could provide comfort for their father. There is indeed a cluster of seven stars in the night sky named for the myth and known as the Pleiades.

14. ID in a library vol. : ISBN
The International Standard Book Number (ISBN) was invented by one Gordon Foster, who is now a professor at Trinity College, Dublin in Ireland. The code was originally developed for booksellers, so that they had a unique number (and now a bar code) for each publication.

16. Three-wheeled Asian cab : CYCLO
“Cycle” is another name for a cycle rickshaw or pedicab.

17. “Peanuts” figure … or some fabulous fall soup? : THE GREAT PUMPKIN
The Great Pumpkin is a figure dreamed up by Linus van Pelt, the character in the comic strip “Peanuts” by Charles M. Schulz. To Linus, the Great Pumpkin is the Halloween equivalent of the Easter Bunny and Santa Claus. Famously, Linus said:

There are three things I have learned never to discuss with people: religion, politics, and the Great Pumpkin.

25. Much-derided 1980s-’90s car : YUGO
The Yugo was a really unreliable subcompact car built by the Zastava corporation, in Yugoslavia.

30. Words to swear by : MOTTOS
“Motto” came into English directly from Italian, and is ultimately derived from the Latin word “muttire”, meaning “to mutter, mumble”.

34. Off-road wheels, for short : ATV
An all terrain vehicle.

38. Onion-flavored roll : BIALY
Bialy is a Yiddish word for a small onion roll, which takes its name from Bialystok, a city in Poland.

43. Kenyan tribesman : MASAI
The Masai (also known as the Massai) are a semi-nomadic people found in Kenya and Tanzania. They are semi-nomadic in that over the years they have been migrating from the Lower Nile Valley in northwest Kenya, and are moving into Tanzania.

44. Suffix with opal : -ESCE
An opal is often described as having a milky iridescence, known as “opalescence”.

45. Key to get out of a jam? : ESC
The escape key was originally used to control computer peripherals. It was a key that allowed the computer operator to stop what the peripheral was doing (cancel a print job, for example). Nowadays the escape key is used for all sorts of other things, especially in gaming programs.

46. At a chop shop, perhaps : STOLEN
After a car is stolen it might be delivered to a “chop shop”, a workshop that can break it up so that it can sold for parts.

48. Tennis’s Graf : STEFFI
Steffi Graf is a former World No. 1 professional tennis player from Germany. She won 22 Grand Slam singles titles, more than any other man or woman other than Margaret Court. She is married to another former World No. 1, Andre Agassi.

51. Exam for an aspiring Esq. : LSAT
The title “esquire” is of British origin, and is used differently today depending on whether one is in the US or the UK. Here in America the term is usually reserved for those practicing the law (both male and female). In the UK it is a term of gentle respect, reserved for a male who has no other title that one can use. So a mere commoner like me might receive a letter from the bank say, addressed to W. E. Butler Esq.

The Martin Scorsese classic “Goodfellas” is a 1990 adaptation of a non-fiction book by Nicholas Pileggi called “Wiseguy”. The film tells the story of a mob family that succumbs to the FBI after one of their own becomes an informant.

56. Ways to the Web: Abbr. : ISPS
An Internet Service Provider (ISP) is just what the name indicates, a company that provides its customers with access to the Internet. One way that ISPs differentiate themselves from each other is in the way in which end users are connected to the ISP’s network. So, there are cable ISPs, DSL ISPs, dial-up ISPs and satellite ISPs. I’d go with cable if I were you, if it’s available in your area …

68. Old camera settings, for short : ASAS
ASA stands for the American Standards Association, and is a term used for the “speed” of a photographic film. Film speed is a measure of its sensitivity to light. High speed film is used in very low light conditions, but it tends to be very “grainy”.

69. Many-headed challenge for Hercules : HYDRA
In Greek mythology, the Lernaean Hydra was a sea snake that had multiple heads. Heracles had to slay the Hydra of Lerna as the second of his Twelve Labors.

70. Like flicks seen without special glasses : TWO-D
Characters in 3D movies appear to jump of the screen, moving in three dimensions. In a regular film the characters move around on the flat screen, in just two dimensions.

71. Instrument played with a plectrum : LYRE
A lyre is a stringed instrument, most closely associated with Ancient Greece.

4. German chancellor Merkel : ANGELA
The formidable politician Angela Merkel is the current Chancellor of Germany, the country’s head of state. Merkel is the first female German Chancellor, and when she chaired the G8 in 2007 she became only the second woman to do so, after the UK’s Margaret Thatcher. Merkel grew up in East Germany under Communist rule.

6. “The Grapes of Wrath” family name : JOAD
Tom Joad is a character in John Steinbeck’s “The Grapes of Wrath”. The role of Joad is played by Henry Fonda in the 1940 film adaptation directed by John Ford. Ford’s movie has a place in history, as it was one of the first 25 movies selected for preservation by the Library of Congress in the US National Film Registry.

7. The “a” in a.m. : ANTE
The 12-hour clock has been around a long time, and was even used in sundial format in Ancient Egypt. Our use of AM and PM dates back to Roman times, with AM standing for Ante Meridiem (before noon) and PM standing for Post Meridiem (after noon). However, the Romans originally used the AM concept a little differently than us, by counting backwards from noon. So, 2AM to the Romans would be two hours before noon, or 10AM as we would call it today.

9. Channel for old films : TCM
Turner Classic Movies (TCM) is one of my favorite television channels, delivering what its name promises, classic movies.

12. “Night” author Wiesel : ELIE
Elie Wiesel is a holocaust survivor, best known for his book “Night” which tells of his experiences in Auschwitz and Buchenwald.

19. “One” on a penny : UNUM
From 1776, “e pluribus unum” was the unofficial motto of the United States. It was pushed aside in 1956 when an Act of Congress made “In God We Trust” the country’s official motto.

24. Lee of Marvel Comics : STAN
Stan Lee did just about everything at “Marvel Comics” over the years, from writing to being president and chairman of the board.

26. Mongolian desert : GOBI
The large desert in Asia called the Gobi lies in northern China and southern Mongolia. The Gobi desert is growing at an alarming rate, particularly towards the south. This “desertification” is caused by increased human activity, and the Chinese government is trying to halt the desert’s progress by planting great swaths of new forest, the so called “Green Wall of China”.

32. Shouts at a fútbol game : OLES
“Fútbol” is the Spanish word for football, soccer.

47. The Midshipmen : NAVY
The Navy Midshipmen football team went undefeated during the 1910 season, and didn’t even have a point scored against them. They didn’t win every game though .. their record included one scoreless draw.

54. One of a Turkic people : TATAR
Tatars are an ethnic group of people, mainly residing in Russia (a population of about 5 1/2 million). Actor Charles Bronson had a Tatar heritage. His real name was Charles Buchinsky.

57. One-horse carriage : SHAY
A shay is a light carriage. It is an American design based on the French “chaise”, from which it takes its name. A shay is sometimes called a “whisky”, as riders would “whisk” around from stop to stop.

61. Frozen waffle brand : EGGO
Eggo is the brand name of a line of frozen waffles made by Kellogs. When they were introduced in the 1930s, the name “Eggo” was chosen to promote the “egginess” of the batter. “Eggo” replaced the original choice for a brand name, “Froffles”, created by melding “frozen” and “waffles”.

65. Thomas Mann’s “Der ___ in Venedig” : TOD
Thomas Mann was a German novelist whose most famous work is probably his novella “Death in Venice”, originally published in German in 1912 as “Der Tod in Venedig”. The story was famously adapted for the big screen in 1971, in a movie starring Dirk Bogarde.