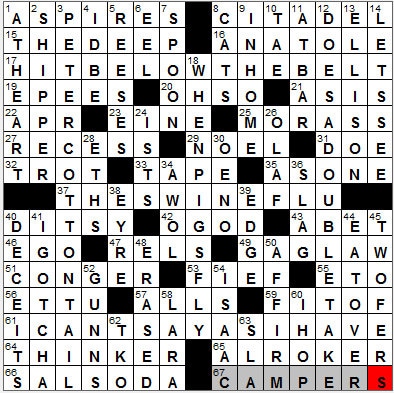 
Today’s Wiki-est, Amazonian Googlies
Across
8. It may be held in battle : CITADEL
A citadel is a fortress built to protect a town or a city. Both the words “city” and “citadel” come from the Latin word “civis” meaning “citizen”.

15. 1977 Jacqueline Bisset movie : THE DEEP
The lovely Jacqueline Bisset is an English actress famous for big screen roles in the likes of “Bulitt” from 1968 and “The Deep” from 1977. More recently she has a recurring role on the successful drama series on the FX channel, “Nip/Tuck”. Bisset is the godmother of fellow actress Angelina Jolie.

19. Aluminum foil alternatives? : EPEES
The French word for sword is épée. In competitive fencing the épée is connected to system that records an electrical signal when legal contact is made on an opponent’s body.

22. Natl. Humor Month : APR
April Fool’s Day is celebrated on April 1st in the western world. In the US (and Ireland) one can make practical jokes all day long if one wants. But in the UK there is a noon deadline. Anyone pranking after midday is called an “April Fool”.

25. Slough : MORASS
A slough is a depression in the ground filled with deep mud.

29. Holiday time : NOEL
“Noël” is the French word for the Christmas season, ultimately coming from the Latin word for “birth”, “natalis”. Noel has come to be used as an alternative name for a Christmas carol.

37. 21st-century epidemic concern : THE SWINE FLU
There was a 2009 outbreak of swine flu in humans that has been blamed for 17,700 deaths worldwide.

43. Get hush money from, for instance : ABET
The word “abet” comes into English from the Old French “abeter” meaning “to bait” or “to harass with dogs” (it literally means “to make bite”). This sense of encouraging something bad to happen morphed into our modern usage of “abet” to mean aid or encourage someone in a crime.

46. It’s “not master in its own house,” said Freud : EGO
Sigmund Freud created a structural model of the human psyche, breaking it into three parts: the id, the ego, and the super-ego. The id is that part of the psyche containing the basic, instinctual drives. The ego seeks to please the id by causing realistic behavior that benefits the individual. The super-ego almost has a parental role, contradicting the id by introducing critical thinking and morals to behavioral choices.

53. Lord’s domain : FIEF
In the days of feudalism, a “fief” was basically a “fee” (the words “fee” and “fief” have the same origins) paid by a lord in exchange for some benefit to him, perhaps loyalty or military service. The fief itself was often land granted by the Lord.

55. It once stretched from France to Russia: Abbr. : ETO
Dwight D. Eisenhower was in command of the European Theater of Operations during WWII. If you’re a WWII buff like me, then I recommend you take a look at a great made-for-TV movie starring Tom Selleck as Eisenhower called “Ike: Countdown to D-Day” which came out in 2004.

56. Shakespearean words following “Speak, hands, for me!” : ET TU
It was Shakespeare who wrote the words “Et tu, Brute?” (And you, Brutus?), in his play “Julius Caesar” although the phrase was around long before he penned his drama. It’s not known what Julius Caesar actually said just before he was assassinated on the steps of the Senate in Rome.

66. Bleach component : SAL SODA
Sodium carbonate is a well known as a water softener sold for use in laundry, and is variously described as Sal Soda, Washing Soda and Soda Crystals.

Down
2. U.P.S. customer : SHIPPER
United Parcel Service (UPS) is based in Sandy Springs, Georgia, and has its own airline that operates out of Louisville, Kentucky.

3. Easter character : PETER COTTONTAIL
Peter Cottontail is a character in books by Thornton Burgess. Over the years, the Peter Cottontail name has been adopted by the population at large as an alternative to “Easter Bunny”.

6. One that swims with a current? : EEL
Electrophorus electricus is the biological name for the electric eel. Despite its name, the electric “eel” isn’t an eel at all, but rather what is called a knifefish, a fish with an elongated body and related to the catfish. The electric eel has three pairs of organs along its abdomen, each capable of generating an electric discharge. The shock can go as high as 500 volts with 1 ampere of current (that’s 500 watts), and that could perhaps kill a human.

8. Broadway smash whose poster image consisted of just two eyes : CATS
Andrew Lloyd Weber’s source material for his hit musical “Cats” was T. S. Eliot’s “Old Possum’s Book of Practical Cats”. Eliot’s collection of whimsical poems was published in 1939, and was a personal favorite of Weber as he was growing up. “Cats” is the second longest running show in Broadway history (“Phantom of the Opera” is the longest, and is still running; deservedly so, in my humble opinion).

10. ___ Bo : TAE
Tae Bo isn’t an ancient martial art, but was developed as a form of aerobic exercise in the 1990s. It was introduced by taekwondo expert Billy Blanks who gave it the name Tae Bo, a melding of taekwondo and boxing.

34. Bad way to go : AWOL
The Military Police go after personnel who are Absent With-Out Leave.

38. Name abandoned for Rochester : EYRE
“Jane Eyre” is of course the novel written by Charlotte Bronte under the pen name Currer Bell. Over the years, I’ve shared here on the blog that the storyline is a little too dark and Gothic for my taste, but a very persuasive blog reader convinced me to look more at the romantic side of the story and give it a second chance. I watched a wonderful 4-hour television adaptation of the novel made by the BBC very recently, and I have to say that because I was focused on the relationship between Jane and Rochester, I was able to push past the Gothic influences (that depress me) so I really enjoyed the performance. I thoroughly recommend this 2006 BBC adaptation to fans of the novel.

52. TV detective Peter and others : GUNNS
“Peter Gunn” is a crime drama about a private eye, that ran on NBC and ABC in the late fifties and early sixties. The show was created by Blake Edwards, with many episodes being directed by Robert Altman.

54. One spared in a sacrifice : ISAAC
According to the Hebrew Bible, Isaac was the only son of Abraham, born to his wife Sarah when she was beyond her childbearing years, and when Abraham was 100 years old. Isaac himself lived until he was 180 years old.

58. Superman’s mother : LARA
Lara Lor-Van is the biological mother of Kal-El, and wife of scientist Jor-El. Kal-El is sent to Earth, where we would know him better as Superman.

62. It’s declared after the last hit, for short : TKO
In boxing, a knockout (KO) is when one of the fighters can’t get up from the canvas within a specified time, usually 10 seconds. This can be due to fatigue, injury, or the participant may be truly “knocked out”. A referee, fighter, or doctor may also decide to stop a fight without a physical knockout, especially if there is concern about a fighter’s safety. In this case, the bout is said to end with a technical knockout (TKO).

63. Grp. in 1974 news : SLA
The Symbionese Liberation Army was founded by an escapee of the prison system, Donald DeFreeze, in 1973. The group’s manifesto promoted the rights of African Americans, although in the 2-3 year life of the group, DeFreeze was the only black member. Famously, they kidnapped heiress Patty Hearst in 1974.