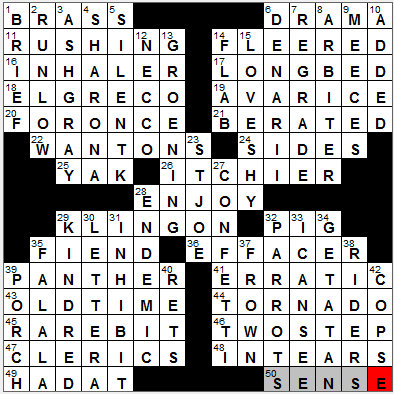 
Today’s Wiki-est, Amazonian Googlies
Across
14. Derided : FLEERED
To fleer is to laugh or sneer contemptuously, and is possibly of Scandinavian origin.

17. Kind of pickup : LONG BED
The great thing about a long bed pickup truck is that you can usually get a standard size (4’x8’) sheet of plywood or drywall in the back with the tailgate closed.

18. “St. Martin and the Beggar” painter : EL GRECO
“El Greco” (“the Greek”, in Spanish) was the nickname of the artist whose real name was Domenikos Theotokopoulos. El Greco was born in Crete in 1541, and moved to Venice to study art when he was in his early twenties. A few years later he moved to the city of Toledo in central Spain, where he lived and worked for the rest of his life.

21. Upbraided : BERATED
“To upbraid” is to reproach, find fault with, and is of Swedish origin.

22. Lascivious sorts : WANTONS
“Lascivious” is such an appropriate-sounding word, I always think. It means lecherous or salacious.

29. Language with no word for “hello” : KLINGON
Klingons are a warrior race often featured in the “Star Trek” franchise of shows. Back in the first “Star Trek” movie, the actor James Doohan (who played “Scottie”) put together some Klingon dialogue that was used in the film. For subsequent movies, the American linguist Marc Okrand was commissioned to develop a working Klingon language, which he duly did, using the original words from Doohan as its basis.

39. Pitt athlete : PANTHER
The Pitt Panthers are the athletic teams of the University of Pittsburgh.

41. Mercurial : ERRATIC
“Mercurial” is an adjective used to describe things related to Mercury, the god or the planet. A person described as mercurial is said to have a changeable temperament, a characteristic long associated with people born under the influence of the planet. This erratic quality may be an association with the fluid properties of mercury, the liquid metal.

44. Subject of the Fujita scale : TORNADO
The Fujita scale (or F-scale) measures the intensity of tornadoes. It does so by measuring the effect that the tornado has on man-made structures and on vegetation. It was developed in 1971 by Tetsuya Fujita of the University of Chicago.

45. British dish with an American version called a Hot Brown : RAREBIT
Welsh rarebit is a delicious dish made using a cheese-flavored sauce served over toast. It may be that the name Welsh rarebit was originally a bit of an insult to the folks in Wales. The dish was called Welsh “rabbit” back in the 1700s. In those day’s rabbit was the poor man’s meat, and the implication of the dish’s name is that in Wales cheese was the poor man’s rabbit.

The Hot Brown is a variation of Welsh rarebit, created at the Brown Hotel in Louisville, Kentucky in 1926. It is an open-faced sandwich made with turkey and bacon, smothered in Mornay sauce and baked or broiled until the sauce starts to brown.

46. Polka relative : TWO-STEP
The polka is a dance from central Europe, one that originated in Bohemia in the mid-1800s. It’s thought that “polka” comes from a Czech word meaning “little half”, reflecting the little half-steps included in the basic dance.

48. Lachrymose : IN TEARS
“Lachrymose” means “teary”, from the Latin “lacrima”, the word for “tear”.

50. What the cogent make : SENSE
Something cogent makes sense, it is convincing and reasonable.

4. “My” girl in a 1979 hit : SHARONA
“My Sharona” is a hit single from 1979 released by a band called the Knack. The band’s guitarist wrote the song after meeting a 17-year-old girl called Sharona, who later became his girlfriend. Young Sharona appears on the cover sleeve for the record. Three decades later, Sharona’s a real estate agent in LA.

6. Coins for Cicero : DENARII
The denarius (plural “dinarii”) is a small silver coin that was used in Ancient Rome. Derived from the Latin “deni” meaning “containing ten”, a denarius had the value of ten asses. Today the dinar is a common coin in the Arab world, and it is named for the old Roman coin. The dinar name was chosen in the days when Arabs conquered large swathes of the old Roman Empire.

9. Varmints, in a classic cartoon line : MEECES
I so remember “The Huckleberry Hound Show” from the late fifties and early sixties. As a young tot I had curtains on my window that featured characters from the show. Three regulars were Pixie and Dixie and Mr. Jinks. Pixie and Dixie were two mice, and Mr. Jinks was a cat. Mr. Jinks has a famous line that went, “I hate those meeces to pieces!” Great stuff …

12. Big name in wafers : NECCO
Necco Wafers are the best known product line of the candy manufacturer called the New England Confectionery Company. The firm’s name is abbreviated to NECCO, an acronym that became synonymous with the wafers.

13. Creator of “The Simpsons” : GROENING
Matt Groening is a cartoonist. He created two successful animated shows for television, namely “The Simpsons” and “Futurama” (neither of which I understand!).

23. Missouri metro : ST JOE
The city of Saint Joseph in Missouri was the westernmost point in the US that was accessible by rail after the Civil War. As such, it was a final stopping-off point as people headed out to the Wild West. The city takes its name from its founder, fur trader Joseph Robidoux. Robidoux apparently like things named after himself and his family, as eight of the main streets downtown were named after his children, and another was named for his second wife!

27. It may come down after a win : CONFETTI
The word “confetti” is related to “confection”. The original confetti were small candies thrown during carnivals in Italy. This custom migrated to England, and eventually evolved into the practice of tossing small pieces of paper instead of confections.

35. Start of a Christmas refrain : FA-LA-LA
The refrain that starts “Fa-la-la …” is from the traditional Yuletide carol “Deck the Halls”. The tune itself is Welsh in origin, dating back to the 16th century. The lyrics, however, are American and are from the 19th century. Even Mozart used the tune as a theme for a delightful violin and piano duet.

40. Softens in water, in a way : RETS
Retting is soaking, a word commonly used to describe the soaking of fibrous plants such as flax in order to soften and separate the fibers.

42. Thicket of trees : COPSE
A copse is a small stand of trees. A copse was originally a small thicket that was specifically grown for cutting.