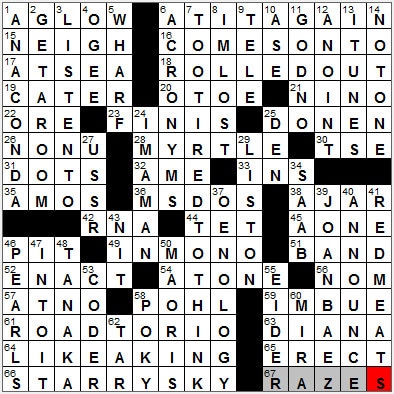 15. Trigger-happy sound? : NEIGH
Roy Rogers had a famous horse, a palomino named Trigger. When Rogers met up with Trigger, he was a “horse-for-rent” who appeared regularly in films. He was called Golden Cloud back then, and one of his roles was as the mount of Maid Marian, played by Olivia de Havilland, in “The Adventures of Robin Hood”. After Rogers rode Golden Cloud in his first major movie, he bought him and renamed him Trigger.

17. In a main location? : AT SEA
When one thinks of the word “main” in the context of the sea, the Spanish Main usually comes to mind. Indeed, the use of the more general term “main”, meaning the sea, originates from the more specific “Spanish Main”. “Spanish Main” originally referred to land and not water, as it was the name given to the main-land coast around the Caribbean Sea in the days of Spanish domination of the region.

20. Winnebago relative : OTOE
The Otoe (also Oto) Native American tribe originated in the Great Lakes region as part of the Winnebago or Siouan tribes. The group that would become the Otoe broke away from the Winnebago and migrated southwestwards ending up in the Great Plains. In the plains the Otoe adopted a semi-nomadic lifestyle dependent on the horse, with the American bison becoming central to their diet.

21. New Mexican, e.g. : NINO
In Spanish a boy is a niño or a muchacho. One can call also an adult male a muchacho, “one of the boys”, but not a niño, as that would be an insult.

25. “Singin’ in the Rain” co-director : DONEN
Along with Gene Kelly, Stanley Donen was the co-director of the 1952 musical “Singin’ in the Rain”. Donen also directed another great dance classic, 1951’s “Royal Wedding”, where famously he had Fred Astaire dancing on the ceiling. Decades later in 1986, when Lionel Richie released his song “Dancing on the Ceiling”, he used Stanley Donen to direct the music video.

26. Unlike aristos : NON-U
“Non-U” is a term used in the UK starting in the fifties, referring to those who are “not upper class”, i.e. middle class. In effect, “the U” were the “upper” class.

30. Ki ___ (legendary founder of Korea) : TSE
Ki-Tse was supposedly a Chinese statesman who lived in the 12th century. There appears to be some doubt about his actual existence, but his name is often associated with the founding of a kingdom that developed into modern-day Korea.

31. City representatives? : DOTS
Cities are usually represented on a map by dots of various sizes.

32. Letters in some church names : AME
The African Methodist Episcopal (AME) Church was founded in 1816 in Philadelphia.

35. Pastoral prophet : AMOS
Amos is one of the twelve minor prophets in the Hebrew Bible.

36. It worked from a prompt : MS-DOS
MS-DOS was the main operating system used by IBM-compatible PCs in the eighties and for much of the nineties.

38. Allowing peeking, perhaps : AJAR
Our word “ajar” is thought to come from Scottish dialect, in which “a char” means “slightly open”.

42. Viroid composition : RNA
A virus is an infective agent, composed of RNA protected by a coating of protein. A viroid is a smaller pathogen, also composed of RNA, but without the protection of proteins.

The Viet Cong was the name of the political and military organization based in South Vietnam that fought the US and South Vietnamese government during the Vietnam War. It was the Viet Cong, as opposed to the North Vietnamese, who launched the famous Tet Offensive in 1968.

49. Like old AM radio : IN MONO
Monophonic sound (“mono”) is sound reproduced using just one audio channel which is usually played out of just one speaker. Stereophonic sound is reproduced using two audio channels, with the sound from those channels usually played out of two speakers. The pair of stereo speakers are usually positioned apart from each other so that sound appears to come from between the two. Quadraphonic sound (4.0 surround sound) uses four audio channels with the sound played back through four speakers often positioned at the corners of the room in which one is listening.

Jacques-Yves Cousteau started off his career in the French Navy, aiming for a working life in aviation. Because of a car accident, he had to abandon his first career choice and instead went to sea. Famously, he invented the Self Contained Underwater Breathing Apparatus (SCUBA), also called the aqualung.


57. Am or Fm stat : AT NO
The atomic number of an element is also called the proton number, and is the number of protons found in the nucleus of each atom of the element.

Am is the symbol for the element Americium. Americium was first produced during WWII at the University of California in Berkeley. The discovery was related to the Manhattan Project and so was kept secret from the public until after the war.

Fm is the symbol for the element Fermium. Fermium was discovered as a result of the first hydrogen bomb explosion, in 1952. It is named for Enrico Fermi, a leading Italian nuclear physicist of the day. Fermium is the element with the atomic number of 100.

58. Sci-fi writer Frederik : POHL
Frederik Pohl is an American science-fiction writer, a winner of three Hugo awards. He started off his career as a literary agent, and was the only agent ever hired by Isaac Asimov.

59. Go all the way through : IMBUE
To imbue is to pervade, to soak in. “Imbue” has the same etymological roots as our word “imbibe”.

61. Fifth in a series of seven old comedy films : ROAD TO RIO
“Road to Rio” is the fifth of the “Road” series of films that starred Bing Crosby, Bob Hope and Dorothy Lamour. “Road to Rio” was released in 1947, and was the only movie in which Big Crosby and the Andrew Sisters appeared on screen together.

63. Her temple was adorned with cows’ horns : DIANA
The Temple of Artemis, also known as the Temple of Diana, was a Greek temple located at Ephesus, now in modern Turkey. Artemis was a Greek goddess, the twin of Apollo, and she was depicted as a virginal huntress.

Down
1. One you don’t want to have a crush on you : ANACONDA
Anacondas are native to the tropical regions of South America. The green anaconda is one of the world’s largest snakes, growing to 17 feet long and weighing up to 215 pounds! Anacondas are not venomous, and prefer to kill their prey by coiling around it and then squeeeeeezing …

2. Order to curtail public bussing : GET A ROOM
“Buss” is a slang term for “kiss” apparently …

4. Arch type : OGEE
An ogee is like an s-curve. Specifically it is a curve consisting of two arcs that curve in opposite directions (like an S) but both ends of the curve end up parallel to each other (which is not necessarily true for an S).

6. MoMA and Epcot, e.g. : ACRONYMS
The practice of using acronyms is relatively new. Hardly any acronyms existed before the 20th century, and the word itself, “acronym”, only came into being in 1943. Interesting, huh?

10. Polymer finish? : -ASE
Polymerase is an enzyme, with the job of making new RNA and DNA.

13. Its logo features two eighth notes : ITUNES
What are known as eighth notes in the US and Canada, are called quavers in other English-speaking countries around the world.

iTunes is a very, very successful software application from Apple. It’s basically a media player that works on platforms like the iPad, iPhone and iPod. Of course it connects seamlessly to the iTunes store, where you can spend all kinds of money.

24. Yardbirds hit of 1965 : I’M A MAN
The Yardbirds is a rock band that was very big in the sixties. It disbanded in 1968, but reformed in 1992 and is still going strong today. One of the groups most famous hits was “For Your Love”, and playing on the original recording of that sing was band member Eric Clapton. Clapton left the Yardbirds soon afterwards, having gained his initial foothold in the world of rock music.

29. Clay target? : LISTON
Sonny Liston won the heavyweight boxing championship in 1962 by knocking out Floyd Patterson in the first round. Liston suffered a first round defeat himself in 1965, to Muhammad Ali. A picture from that fight, of Ali standing over Liston, was featured on the cover of a special “Sports Illustrated” edition featuring “The Century’s Greatest Sports Photos”.

SAAB stands for Svenska Aeroplan AB, which translates into English as Swedish Aeroplane Limited. SAAB was, and still is, mainly an aircraft manufacturer. If you take small hops in Europe you might find yourself on a SAAB passenger plane. The SAAB automobile division was acquired by General Motors in the year 2000.

37. It’s concerned with ports : OENOLOGY
In Greek mythology Oeno was the goddess of wine, giving us “oeno-” as a prefix meaning “wine”. Oenology, for example, is the study of wine.

39. Follower of Arlo Guthrie at Woodstock : JOAN BAEZ
Joan Baez is an American folk singer, and a prominent activist in the fields of nonviolence, civil rights, human rights and environmental protection. She has dated some high-profile figures in her life, including Bob Dylan, Steve Jobs (of Apple) and Mickey Hart of the Grateful Dead.

43. Baby beef? : NIT
A “beef” is a complaint, and to “nitpick” is to be excessively critical, complaining about every little thing. So a “nit” might be considered a little beef, a “baby beef”. I think that’s it anyway …

48. Godzilla creator Tomoyuki ___ : TANAKA
Tomoyuki Tanaka was a Japanese film producer, famous as the father of the “Godzilla” series of films.

Godzilla was a Japanese invention. The first in a very long series of films was released way back in 1954. The original name in Japanese was “Gojira”, but this was morphed in Godzilla for audiences outside of Japan. “Gojira” is a combination of “gorira” and “kujira”, the Japanese words for gorilla and whale, apt because Godzilla is a big ape-like creature that came out of the deep.

50. They call their native language “te reo” : MAORIS
The Māori are the indigenous people of New Zealand. The Māori are eastern Polynesian in origin and began arriving in New Zealand relatively recently, starting some time in the late 13th century. The word “māori” simply means “normal” in the Māori language, distinguishing the mortal human being from spiritual entities.

55. Comforter material : EIDER
Eiders are large seaducks. Their down feathers are used to fill pillows and quilts, giving the name to the quilt called an “eiderdown”.

60. Red giant in Cetus : MIRA
Red giants are very large stars with a relatively low mass. The atmosphere of a red giant is also very inflated and extends a long way into space, so the surface of that atmosphere that we see is relatively cool, which gives it a red color.

62. With 46-Across, prehistoric animal preserver : TAR
(46A. See 62-Down : PIT)
A tar pit is an unusual geological feature, leakage of bitumen from below ground to the earth’s surface creating a a pool of natural asphalt. One of the most famous of these occurrences is the La Brea Tar Pits in Los Angeles.