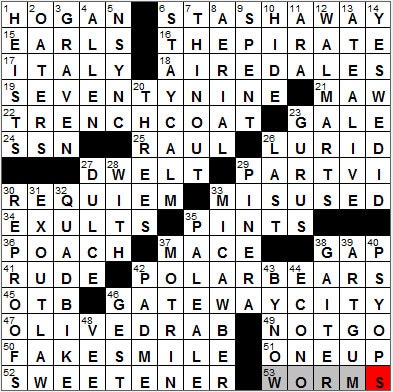 
Today’s Wiki-est, Amazonian Googlies
Across
1. Indian home : HOGAN
Hogan is the anglicization of a Navajo word meaning “the home place”.

15. Gloucester and Kent, in “King Lear” : EARLS
Shakespeare was inspired to write his famous drama “King Lear” by the legend of “Leir of Britain”, the story of a mythological Celtic king.

16. 1822 Walter Scott novel about Capt. Clement Cleveland : THE PIRATE
“The Pirate” is a novel by Sir Walter Scott, and although it is fiction the story is based on the life of the pirate John Gow.

17. Its calling code is +39 : ITALY
Having had the privilege of travelling much of the world, largely a requirement for work, I’ve learned a lot of the international call prefixes. Here are some of my favorites i.e. places where we have lived over the years!

18. President Harding’s Laddie Boy and others : AIREDALES
Of all the pets of the US Presidents, perhaps none had a more exalted position than Laddie Boy, the Airedale terrier belonging to President Warren G. Harding. Laddie Boy even had his own chair on which to sit during cabinet meetings. After President Harding died, newsboys across the country collected 19,134 pennies which were melted and sculpted into a statue of Laddie Boy that you can see in the Smithsonian.

22. Carmen Sandiego cover-up? : TRENCH COAT
The “Carmen Sandiego” franchise is, I think, a remarkably clever and helpful series of computer games and other media that is designed to educate users (primarily children). The applications were originally designed to use an exciting espionage motif in order to expose young people to geography and history, and even math, English and other subjects.

The trench coat was developed primarily for the use of the military. It is a waterproof coat that extends to just below the knee, and generally has a removable lining. In the world of Hollywood we often encounter the trench coat. One is worn by Humphrey Bogart in “Casablanca”, and by Peter Sellers in the “Pink Panther” movies.

23. 8 on the Beaufort scale : GALE
The Beaufort wind scale is named after Irishman, Sir Francis Beaufort, a Rear-Admiral in the Royal Navy. Beaufort was a hydrographer as well as a career navy man.

24. Until June 25, 2011, its first three digits had geographical significance: Abbr. : SSN
Prior to the June 2011, the first three digits of the Social Security Number (SSN) was designated as an Area Number. In recent decades this Area Number reflects the ZIP code in the mailing address of the person for which the SSN was applied. From June 2011, all SSNs issued have been assigned randomly. I always think that’s a good idea …

25. “Tempest” Golden Globe nominee Julia : RAUL
Raúl Juliá was a Hollywood actor from San Juan, Puerto Rica. He had a very distinguished career, but is perhaps best known for portraying Gomez Addams in the two film adaptations of “The Addams Family”.

27. Lived in King James’s era? : DWELT
The King James Bible is a translation of the Christian Bible that was completed in 1611, during the reign of King James I of England.

9. “Jason Lives,” e.g. : PART VI
“Friday the 13th: Jason Lives” was the sixth in twelve (so far!) of a very successful slasher film series. How many have I sat through? Well, that would be none …

30. Notes in passing? : REQUIEM
A requiem is a mass for the repose of the soul of the dead. “Requiem” is a Latin word meaning “rest after labor”.

37. Weapon that comes in easy-to-carry and hard-to-carry varieties : MACE

Mace is actually a brand name, originally introduced by Lake Erie Chemical when they started to manufacture “Chemical Mace”, with the name being a play on the club-like weapon from days of old. Mace was originally a form of tear gas, but Mace today uses a formula that is actually a pepper spray, a different formulation.

A mace is a relatively simple weapon in essence, a heavy weight on the end of a handle that is used to deliver powerful blows on an opponent’s body.

38. Lacuna : GAP
A lacuna is a missing piece of text (or music) in a larger work. Usually the text has been lost due to damage of an older manuscript. Lacunae can be very controversial, as experts vie with each other to suggest what words have been lost.

45. Place that shows placing and showing: Abbr. : OTB
Off-Track Betting (OTB) is the legal gambling that takes place on horse races outside of a race track. A betting parlor can be referred to as an OTB.

53. Some of them are flukes : WORMS
Flukes are parasitic flatworms known as trematodes. Flukes are named after the Old English word for the flounder, a flatfish that has a similar shape.

2. Tom Mix vehicles : OATERS
The American actor known as Tom Mix made an incredible number of films, 336 in all. Most of these were Westerns, and almost all were silent movies. He was known as Hollywood’s first megastar.

3. Second Commandment word : GRAVEN
In the Christian tradition the second commandment prohibits the worship of “any graven image”. Usually this means that graven images can be created, but not worshipped.

4. Wrench handle? : ALLEN
The Allen wrench (or “Allen key”, as we call it back in Ireland) is a successful brand of hex wrench that was trademarked in 1943 by the Allen Manufacturing Company of Hartford , Connecticut. However, the hex wrench had in fact been around since the mid-to-late 1800s.

5. “It’s Gonna Be Me” band of 2000 : ‘N SYNC
‘N Sync was an American boy band from Orlando, Florida that was formed in 1995. The name of the group came from a comment by the mother of band member Justin Timberlake, who said the boys voices sounded “in sync”. But, it’s also true that the letters of the name ‘N Sync are the last letters of the given names of the five band members:

11. Constellation between Scorpius and Triangulum Australe : ARA
The constellation of Ara takes its name from the Latin word for “altar”.

12. Supercenters, e.g. : WALMARTS
Walmart (previously “Wal-Mart”) takes in more revenue than any other publicly traded company in the world. Over in my homeland, Walmart operates under the name Asda. Walmart’s worldwide headquarters are in Bentonville, Arkansas, the home of Sam Walton’s original Five and Dime. You can actually go into the original store, as it is now the Walmart Visitor’s Center.

14. Celebratory chant at Chicago’s Grant Park on 11/4/08 : YES WE DID
“Yes We Can” was a chant adopted by the Obama campaign during the successful 2008 presidential campaign. The slogan for the campaign was, “Change we can believe in”.

I’ve always loved the word “maven”, another word for an expert. Maven comes into English from the Yiddish “meyvn”, someone who understands (at least I think that’s right).

29. Sebastián ___ (president of Chile beginning in 2010) : PINERA
Sebastián Piñera is the current President of Chile, one of the richest people in the country. Prior to being appointing to the office he placed 400 million dollars in blind trusts in order to avoid conflicts of interest.

31. Gary Cooper played one in “Man of the West” : EX-OUTLAW
I have to say that I’m not a fan of Westerns, except when Gary Cooper takes the screen. His portrayal of Western roles was always very quiet and yet endearing.

33. Dickens character whose first name is Wilkins : MICAWBER
John Dickens was the father of the famous Victorian author, Charles Dickens. John was not good with money and spent beyond his means. When young Charles was about 12 years old, his father was locked away in debtors’ prison, something that clearly had some impact on the author-to-be. Charles wrote “David Copperfield” some 25 years later, a novel that was based on experiences in his own life. Included in the story is the character Wilkins Micawber, modeled on his father. Charles even sent Micawber to debtors’ prison, just like John.

37. “We feel your pain” sloganeer : MOTRIN
Advil and Motrin are brand names for the anti-inflammatory drug ibuprofin.

38. Ankle covering : GAITER
A “gaiter” is a heavy cloth or piece of leather that covers the leg from the instep up to the ankle or perhaps knee.

39. Kind of eraser : ART GUM
An art gum eraser is popular with artists, and is made of soft rubber.

40. “Hearts and minds” activities, in military slang : PSY OPS
Psychological Operations (Psy Ops) is a contemporary name for propaganda, the “winning of hearts and mind”s in a combat zone.

42. Luke’s mother in “Star Wars” : PADME
In the “Star Wars” universe, Padmé Amidala is the Queen of the planet Naboo. Played very ably by Natalie Portman, Padmé becomes the secret wife of Anakin Skywalker, later revealed to be Darth Vader. As such, Padmé is also the mother of Luke Skywalker and his sister, Princess Leia Organa.

46. Exploit : GEST
Our word “gest” meaning a great deed or an exploit has been around since about 1300, and comes from the Old French word “geste” meaning the same thing.