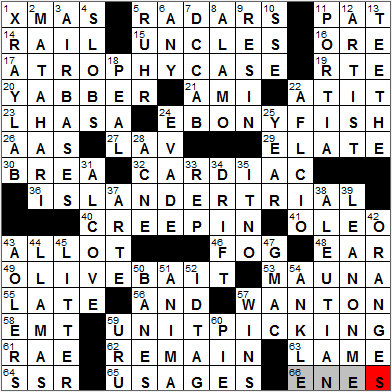 CROSSWORD SETTER: Kelsey Blakley
THEME: Beginning with a Vowel … all of the theme answers are well known terms, each with a vowel added in front (AEIOU, in order):


Today’s Wiki-est, Amazonian Googlies
Across
5. Detection devices : RADARS
Scientists have been using radio waves to detect the presence of objects since the late 1800s, but it was the demands of WWII that accelerated the practical application of the technology. The British called their system RDF standing for Range and Direction Finding. The system used by the US Navy was called Radio Detection And Ranging, shortened to the acronym RADAR.

11. One way to stand : PAT
To stand pat is to resist change. The term comes from the game of poker, in which one “stands pat” if one keeps one’s hand as is, without drawing any extra cards.

In the original television version of “The Addams Family”, the character called Uncle Fester was played by Jackie Coogan. In the first two adaptations for the big screen, Uncle Fester was portrayed by the talented Christopher Lloyd.

Anton Chekhov’s play “Uncle Vanya” was published in 1897. It is not really an “original” work, in the sense that it is a reworking of a play he wrote and published a decade earlier called “The Wood Demon”.

16. Shipment to a smeltery : ORE
Metals are found in ore in the form of oxides. In order to get pure metal from the ore, it is heated and the oxides reduced (i.e. the oxygen is removed) in the chemical process known as smelting. The oxygen is extracted by adding a source of carbon or carbon monoxide which uses up the excess oxygen atoms to make carbon dioxide, a waste product of smelting (and of course, a greenhouse gas).

23. The Forbidden City : LHASA
Lhasa is the capital city of Tibet, and the name “Lhasa” translates as “place of the gods”. However, Lhasa used to be called Rasa, a name that translates into the less auspicious “goat’s place”. Lhasa was also once called the “Forbidden City” due to its inaccessible location high in the Himalayas and a traditional hostility exhibited by residents to outsiders. The “forbidden” nature of the city has been reinforced since the Chinese took over Tibet in the early 1950s as it has been difficult for foreigners to get permission to visit Lhasa.

27. Facilities, informally : LAV
Our word “lavatory” originally referred to a washbasin, and comes from the Latin “lavatorium”, a place for washing. In the 1600s a lavatory became a washroom, and in the 1920s a toilet.

30. La ___ Tar Pits : BREA
The La Brea Tar Pits are located right in the heart of the city of Los Angeles. At the site there is a constant flow of tar that seeps up to the surface from under the ground, a phenomenon that has been around for tens of thousands of years. What is significant at La Brea is that much of the seeping tar is covered by water. Over many, many centuries animals came to the water to drink and became trapped in the tar as they entered the water to quench their thirst. The tar then preserved the bones of the dead animals. Today a museum is located right by the Tar Pits, recovering bones and displaying specimens of the animals found there. It’s well worth a visit if you are in town …

41. Spread selection : OLEO
Emperor Louis Napoleon III of France announced a competition to develop a substitute for butter, a substitute that would be more accessible to the lower classes and more practical for the armed forces. A French chemist called Hippolyte Mege-Mouries came up with something he called oleomargarine in 1869, which was eventually manufactured under the trade name “margarine”. The name “oleomargarine” also gives us our generic term “oleo”.

48. Bionic part of the Bionic Woman : EAR
I so much preferred “The Bionic Woman” over the original show, “The Six Million Dollar Man”. That was probably because I was “at that age” in the mid-seventies, when the star Lindsay Wagner was attracting my attention! Wagner played Jaime Sommers who was badly injured in a parachute jump, and she was given robotic implants that gave her speed, strength and exceptional hearing.

49. Lure for Popeye’s sweetie? : OLIVE BAIT
“Thimble Theater” was the precursor comic strip to the famous “Popeye” drawn by E. C. Seger. Before Popeye came into the story, the brother and sister characters Castor Oyl and Olive Oyl were the main protagonists. And then, along comes a sailor …

53. ___ Kea : MAUNA
Mauna Kea is a dormant volcano on the Big Island of Hawaii, the peak of which is the highest point in the whole state. Mauna Kea is in effect the tip of a gigantic volcano rising up from the seabed. So, the real height of the volcano is over 33,000 feet, which is significantly “taller” than even Mount Everest, which has an elevation 29,029 feet above sea level.

61. Funny Charlotte : RAE
Charlotte Rae is an American actress, best known for playing the character Edna Garrett on two sitcoms from the seventies and eighties: “Diff’rent Strokes” and “The Facts of Life”.

64. Georgia, once: Abbr. : SSR
The former Soviet Socialist Republic of Georgia is now an independent country. Supposedly, the Georgian people were given their name because they especially revered St. George. The flag of Georgia does indeed feature five St. George’s crosses.

66. Hydrocarbon suffixes : -ENES
An alkene is an organic compound made up of carbon and hydrogen atoms. It differs from an alkane in that it has at least one C=C double bond. The simplest alkene is the gas ethylene, a major raw material used in the manufacture of plastics (like polyethylene).

1. Medical dept. room : X-RAY LAB
X-rays were first really studied by the German physicist Wilhelm Röntgen (also “Roentgen”), and it was he who gave the name “X-rays” to this particular type of radiation. Paradoxically, in Röntgen’s native language of German, X-rays are routinely referred to as “Röntgen rays”. In 1901 Röntgen won the first Nobel Prize in Physics that was ever awarded, recognition for his work on X-rays.

2. Exotic dancer executed in 1917 : MATA HARI
Mata Hari was the stage name used by Margaretha Geertuida Zella, born in the Netherlands in 1876. After an unsuccessful and somewhat tragic marriage, Zella moved to Paris in 1903 where she struggled to make a living. By 1905 she was working as an exotic dancer and using the name Mata Hari. She was a successful courtesan, notably moving in various circles of high-ranking military officers. She apparently worked as a double agent, both for the French and the Germans. When she was accused by the French of passing information to the enemy, she was tried, found guilty and executed by firing squad in 1917 at the height of WW1.

8. 1836 siege site : ALAMO
The Battle of the Alamo took place in 1836, a thirteen-day siege by the Mexican Army led by President General Antonio Lopez de Santa Anna. Only two people defending the Alamo Mission survived the onslaught. One month later, the Texian army got its revenge by attacking and defeating the Mexican Army in the Battle of San Jacinto. During the surprise attack on Santa Anna’s camp, many of the Texian soldiers were heard to cry “Remember the Alamo!”.

9. Frankincense or myrrh : RESIN
Frankincense and myrrh are both tree resins, exuded when certain species of tree are damaged. The harvested resins are used to make essentials oils for perfumes, and are also burned to give off a pleasant fragrance.

10. GPS heading : SSE
GPS stands for Global Positioning System. The modern GPS system that we use today was built by the military who received the massive funding needed because of fears during the Cold War of the use of Intercontinental Ballistic Missiles. We civilians, all round the world, owe a lot to President Ronald Reagan because he directed the military to make GPS available to the public for the common good. He was moved to do so after the Soviet Union shot down KAL flight 007 carrying 269 people, just because it accidentally strayed into Soviet airspace.

11. Wife of Brutus : PORTIA
Porcia Catonis was the wife of Brutus, the most famous of the assassins of Julius Caesar. Porcia is famous for her means of suicide. Many believe that she killed herself by swallowing burning coals. Others suggest it more likely that she locked herself in a sealed room with the coals so that she died from carbon monoxide poisoning.

12. iTunes search category : ARTIST
iTunes is a very, very successful software application from Apple. It’s basically a media player that works on platforms like the iPad, iPhone and iPod. Of course it connects seamlessly to the iTunes store, where you can spend all kinds of money.

22. Result of a ’55 union merger : AFL-CIO
The American Federation of Labor was founded in 1886, making it one of the first federations of unions in the country. Over time, the AFL became dominated by craft unions, unions representing skilled workers of particular disciplines. In the early thirties, John L. Lewis led a movement within the AFL to organize workers by industry, believing this would be more effective for the members. But the craft unions refused to budge, so Lewis set up a rival federation of unions in 1932, the Congress of Industrial Organizations. The two federations became bitter rivals for over two decades, until finally merging in 1955.

25. Information for an oenologist : YEAR
In Greek mythology Oeno was the goddess of wine, giving us “oeno-” as a prefix meaning “wine”. For example, the study of wine is called oenology.

28. Reason to use Retin-A : ACNE
Retin-A is a brand name for the drug Tretinoin, the acid form of vitamin A that is used to treat acne.

37. Johnson of “Laugh-In” : ARTE
Arte Johnson, as well being a frequent judge on “The Gong Show”, played the German soldier on “Rowan & Martin’s Laugh-In” with the catchphrase, “Very interesting, but …”

38. Like Unalaska : ALEUTIAN
Unalaska is a city on Unalaska Island, one of the Aleutian chain off the coast of Alaska. Within the bounds of the city is Dutch Harbor, the largest fisheries port in the whole of the United States.

39. 1989 movie featuring principal Joe Clark : LEAN ON ME
“Lean on Me” is a biographical movie released in 1989 starring Morgan Freeman as a principal in an inner city school in Paterson, New Jersey. The film is loosely based on the real life experiences of Joe Louis Clark, whom Morgan portrays.

45. Runt’s group : LITTER
Back in 1500 a runt was an old or decayed tree stump, and by the early 1600s it was being used to describe animals that were similarly old and decayed, and ultimately for the smallest and often sickest of a litter.

47. Auto financing org., formerly : GMAC
GMAC is short for General Motors Acceptance Corporation. GM has only a small stake in GMAC now, and indeed the name has been officially changed to Ally Bank. You and me, we are the biggest shareholders in GMAC/Ally today, since the US government gave the bank $12.5 billion to bail it out in 2008-2009.

59. Neighbor of Braz. : URU
The official name of Uruguay is the Oriental Republic of Uruguay, reflecting the countries location on the eastern coast of South America. It is a relatively small country, the second smallest on the continent, after Suriname. In 2009, Uruguay became the first country in the world to provide a free laptop and Internet access to every child. Now there’s a thought …

60. Eskimo ___ : PIE
Eskimo Pies are chocolate covered bars of ice cream, and have been around since the early twenties.