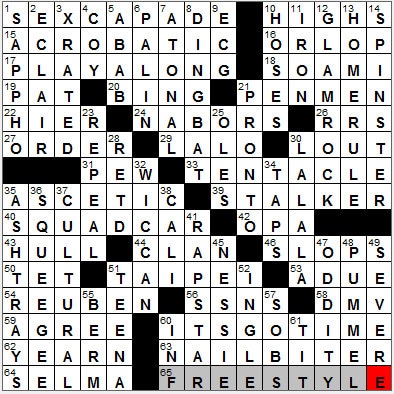 
Today’s Wiki-est, Amazonian Googlies
Across
1. It may be seen in a 3-Down picture : SEXCAPADE
A sexual escapade; a “sexcapade”.

16. Lowest deck on a ship : ORLOP
The orlop is the lowest deck on the ship, the place where cables and ropes used to be stored. The name “orlop” comes from the Dutch word “overlopen” meaning “to run over”. The idea is that all these ropes “ran over” each other while in storage.

20. Google rival : BING
Bing is the search engine from Microsoft. Bing is the latest name for the the engine that used to be called Live Search, Windows Live Search and MSN Search.

21. Scriveners : PENMEN
A scrivener is a professional writer, perhaps a copyist. Our words “scrivener” and “scribe” come from the same Latin roots.

26. Their lines have ties: Abbr. : RRS
Railroad ties are usually wooden, oblong members used to support and maintain the separation between the rails. Over in Europe we call ties “sleepers”, which I think is a much more colorful term!

29. “Le Roi d’Ys” composer : LALO
“Le Roi d’Ys” (“The King of Ys”) is an opera by the French composer Édouard Lalo, with a libretto by Édouard Blau. The storyline is based on an old Breton legend about Ys, a drowned city.

35. Hedonist’s opposite : ASCETIC
A hedonist is someone who seeks to maximise the amount of pleasure in his or her life. “Hedone” is the Greek word for “pleasure”.

42. W.W. II agcy. : OPA
President Franklin D. Roosevelt set up the Office of Price Administration (OPA) during WWII, with the intent of stabilizing prices and rents during the emergency.

50. Offensive time? : TET
The Viet Cong was the name of the political and military organization based in South Vietnam that fought the US and South Vietnamese government during the Vietnam War. It was the Viet Cong, as opposed to the North Vietnamese, who launched the famous Tet Offensive in 1968.

51. City that lost its “tallest building” distinction in 2007 : TAIPEI
The building known as Taipei 101, in the capital of Taiwan, is so-called because it has 101 floors. It was the tallest skyscraper in the world from 2004 until 2010 when the Burj Khalifa was completed in Dubai.

53. Not apart, in scores : A DUE
“A due” is a musical term meaning “together”, and literally translates from Italian as “by two”.

54. Club alternative : REUBEN
There are conflicting stories about the origin of the Reuben sandwich. One is that it was invented around 1914 by Arnold Reuben, a German-Jew who owned Reuben’s Deli in New York.

56. ID figures : SSNS
The main purpose of a Social Security Number (SSN) is to track individuals for the purposes of taxation, although given its ubiquitous use, the SSN is looking more and more like an “universal identity number”. The social security number system was introduced in 1936. Prior to 1986, an SSN was required only for persons with substantial income, so many children under 14 had no number assigned. The IRS suspected that a lot of people were claiming children who did not exist as dependents on their tax forms, so from 1986 onwards it was a requirement to get an SSN for any dependents over the ago of 5. Sure enough, in the following year’s tax returns, seven million dependents “disappeared”.

64. Bloody Sunday march site : SELMA
The Bloody Sunday march took place between Selma and Montgomery, Alabama on March 7, 1965. The 600 marchers were protesting the intimidation of African-Americans trying to register to vote. When the marchers reached Dallas County, Alabama they encountered a line of state troopers reinforced by white males who had been deputized that morning to help keep the peace. Violence broke out with 17 marchers ending up in hospital, one nearly dying. Because the disturbance was widely covered by television cameras, the civil rights movement picked up a lot of support that day.

Down
1. “The tenth Muse,” per Plato : SAPPHO
Plato wrote the following lines:

“Some say the Muses are nine: how careless!
Look, there’s Sappho too, from Lesbos, the tenth.”

2. Oblong temptation : ECLAIR
The name for the pastry known as an éclair is clearly French in origin. The French word for lightning is “éclair”, but no one seems to be too sure how it came to be used for the rather delicious “temptation”.

5. Quatrain scheme : ABAB
A quatrain is a group of four lines of poetry.

7. Missing a key? : ATONAL
Atonal music is not written in any particular key, and therefore does not have a key signature.

8. Dope : DINGBAT
The word “dingbat” has been used to mean a “fool” since the early 1900s. It became very popular after it was used repeatedly by Archie Bunker in the seventies TV show “All in the Family”.

9. Lines coming from the heart, briefly? : ECG
An EKG measures electrical activity in the heart. Back in Ireland, an EKG is known as an ECG (for electrocardiogram). We use the German name in the US, Elektrokardiogramm, giving us EKG. Apparently the abbreviation EKG is preferred as ECG might be confused (if poorly handwritten, I guess) with EEG, the abbreviation for an electroencephalogram, a brain scan.

12. 1970s music genre : GLAM ROCK
I remember the days of glam rock so well, as it was a hugely popular genre of music in the British Isles during the early seventies. Artistes wore the wildest of clothes, big hair, shiny outfits and really high platform boots. Names associated with glam rock are T. Rex, David Bowie, Roxy Music and Gary Glitter.

32. Magick worker : WICCAN
“Magick” is an old variant spelling of “magic” that was used back in the 1600s, and these days is associated with Wiccan beliefs.

34. It causes lights to go out : TAPS
“Taps” is played nightly by the US military, indicating “lights out”. It’s also known as “Butterfield’s Lullaby” as it is a variation of an older bugle call named the “Scott Tattoo”, arranged during the Civil War by the Union Army’s Brigadier General Daniel Butterfield. The tune is called “taps”, from the notion of drum taps, as it was originally played on a drum, and only later adapted for the bugle.

35. Camels’ resting places : ASHTRAYS
The advertising mascot for Camel cigarettes was officially known as “Old Joe”, but was popularly known as “Joe Camel”. Joe originated in the seventies, in an advertising campaign that ran only in Europe where sometimes he was depicted wearing a French Foreign Legion cap. He was imported to the US in 1988 on the occasion of the 75th anniversary of the Camel brand. The big controversy surrounding the use of the camel character was that a 1991 study found that 5-6 year old children could recognize Joe Camel more readily than either Mickey Mouse or Fred Flintstone. Also, soon after Old Joe was introduced in the US, the Camel brand’s share of the illegal market to underage smokers went up from 1% to just under 33%.

36. Sponge alternative : SQUEEGEE
The first squeegee was known as a “squilgee”, and was used to wash fish blood and scales off the decks of fishing vessels.

41. The Notorious B.I.G., e.g. : RAP STAR
The Notorious B.I.G. was the stage name of rap star Christopher Wallace. While at the height of his fame Wallace was killed in a drive-by shooting in Los Angeles, a murder case that has never been solved. There is 2009 biopic, called “Notorious”, about Wallace’s life starring fellow rap artist Jamal Woolard (aka Gravy) in the title role.

45. Tabloid nickname : NESSIE
The Loch Ness monster has been talked about for centuries, but modern interest started in 1933 when a spate of sightings were reported that year. They don’t seem to have stopped since, with photographs really helping to capture the interest of the public at large.


47. Ripley’s love : ODDITY
Norbert Pearlroth was a native of Poland who arrived in America in 1920. He took a job with Robert Ripley as a linguist, as Pearlroth knew eleven languages. He set about researching foreign papers and other publications locating material for Ripley’s “Believe It or Not!” pictorial panel that was widely syndicated in newspapers. Pearlroth worked almost exclusively in New York Public Library, ten hours a day, six days a week, for 52 years. The library estimates that he examined about 7,000 books a year, and over 350,000 books in his time working for Ripley, believe it or not …

52. Fireplace : INGLE
An ingle is a name for a hearth or fireplace. The word “ingle” probably comes from the Scottish word “aingeal” meaning “fire”.

55. Shoulder : BERM
A berm is narrow ledge, usually at the top or bottom of a slope. The name “berm” is also used as the shoulder of a road in some parts of the United States.

60. Like Beethoven’s Sixth : IN F
Beethoven’s Symphony No. 6 is also known as the Pastoral Symphony.