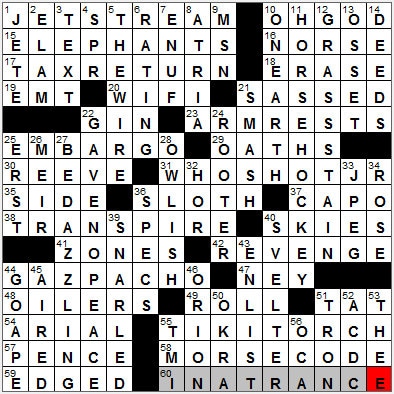 
Today’s Wiki-est, Amazonian Googlies
Across
1. It’s a blast for some balloonists : JET STREAM
Jet streams are narrow air currents high in the atmosphere that move very quickly around the earth. The major jet streams surrounding our planet move in a westerly direction.

16. Like longship sailors : NORSE
Longships were boats used by the Vikings from the Nordic countries of Northern Europe. Characteristically a longship was light, long and thin, made from wood, and had a shallow draft. The boat was also symmetrical and could be sailed in either direction.

20. Provider of a hot spot at a coffee shop? : WI-FI
“Wi-Fi” is nothing more than a trademark, a trademark registered by an association of manufacturers of equipment that use wireless LAN (Local Area Network) technology. A device labeled with “Wi-Fi” has to meet certain defined technical standards, basically meaning that the devices can talk to each other. The name “Wi-Fi” suggests “Wireless Fidelity”, although apparently the term was never intended to mean anything at all.

22. Alexander’s need : GIN
An Alexander is a cocktail made from gin, a chocolate liqueur and cream. Nowadays one tends to hear of the Brandy Alexander more often than the original gin version.

25. Prohibition : EMBARGO
An embargo differs from a blockade. An embargo is a legal prohibition of trade with a particular country, whilst a blockade is an act of war, a militarily enforced prevention of the movement of goods and services. The term “embargo” came into English from Spanish, in the late 16th century.

30. Town council president, in Canada : REEVE
A reeve was a senior official in the days of Anglo-Saxon England, perhaps a chief magistrate of a town. The term is still in use in Canada, generally for the rural equivalent of a mayor.

36. Bent to do nothing : SLOTH
“Sloth”, meaning “indolence, sluggishness”, came from the Middle English word “slowe”, the same root for our contemporary word “slow”. The animal, the sloth, is named for its slow-moving behavior.

37. String shortener : CAPO
A capo is a clamp-like device that is placed around the neck of a guitar to shorten the strings, and hence raise the pitch. The full name, rarely used these days, is “capo tasto”, which is Italian for “head tie”.

40. “Friendly” things, in old ads : SKIES
United Airlines used the tagline “Fly the Friendly Skies” in its marketing materials from 1965 to 1996. It was replaced with “It’s time to fly”.

44. A dish best served cold : GAZPACHO
Gazpacho is a cold soup, made with a tomato base. It originated in Andalusia in southern Spain.

47. Waterloo marshal : NEY
Michel Ney was one of the first 18 Marshals of France created by Napoleon. When Bonaparte was eventually defeated for the last time, Ney was arrested and sentenced to death. He was executed in Paris by firing squad. He refused to wear a blindfold, and demanded that he himself be allowed to give the order to fire.

48. N.H.L. team and former N.F.L. team : OILERS
The National Hockey League’s Edmonton Oilers are so called because they are located in Alberta, Canada … oil country.

51. Pec pic, perhaps : TAT
One might get a tattoo on the skin over one’s pectoral muscles. One might … I wouldn’t …

54. Courier alternative : ARIAL
Both Courier and Arial are fonts.

55. Bit of décor at Trader Vic’s : TIKI TORCH
A tiki torch is a bamboo torch that’s very commonly used in Tiki culture. Tiki culture is a modern invention dating from the 20th century and is the experience created in Polynesian-style restaurants. The word “Tiki” is borrowed from Polynesia.

58. What a ham may use : MORSE CODE
Samuel Morse was a very accomplished and reputable painter (he was engaged to paint a portrait of President John Adams, for example). In 1825 he was in Washington working on a commissioned painting when he received a one-line letter by horse messenger telling him that his wife was ill. He left immediately for his home in New Haven, Connecticut but by the time he arrived she had already died and had been buried. This single event spurred him to move from painting to the development of a rapid means of long distance communication, leading to the single-wire telegraph and Morse code.

Down
1. “Grand” or “petit” dance move : JETE
A jeté is a leap in ballet, coming from the French word “jeter” meaning “to throw”.

2. Ancient rival of Assyria : ELAM
The ancient civilization of Elam was located east of Mesopotamia, in what is modern-day southwest Iran.

3. Cell composition : TEXT
One might compose a text message on a cell phone.

4. Silver ___, Md. (Wash. suburb) : SPR
Silver Spring, Maryland is located at the northern tip of Washington, D.C. The area takes its name from a spring that was discovered there which contained chips of mica in its flow, giving it a silvery appearance.

5. It was Obama’s self-professed favorite TV series : THE WIRE
I didn’t watch “The Wire” when it first aired but we ending up buying all five series on DVD and we watched the whole thing earlier this year. It’s is a great drama series, and I thoroughly recommend it. Personally, I think that HBO produces some of the best dramas on American television.

13. Native of the central Caucasus : OSSET
Ossetia is a region that extends to both sides of the Caucasus Mountains located in Eurasia between the Black Sea and the Caspian.

26. She resigned after the Yom Kippur War : MEIR
Golda Meir was known as the “Iron Lady” when she was Prime Minister of Israel, long before the term came to be associated with British Prime Minister Margaret Thatcher. Golda Meir was born Golda Mabovitch in Kiev (in modern-day Ukraine), and when she was a young girl she moved with her family to the United States and settled in Milwaukee. As a teenager she relocated to Denver where she met and married Morris Meyerson, at the age of 19. She and her husband joined a kibbutz in Palestine in 1921, when she was in her twenties. She had been active in politics in the US, and continued her political work in Palestine. She was very influential during WWII, and played a leading role in negotiations after the war leading to the setting up of the state of Israel. By the time she was called on to lead the country, she had already retired, citing exhaustion and ill health. But serve she did, and led Israel during turbulent times (e.g. the massacre at the Munich Olympics, the Yom Kippur War). She eventually resigned in 1974, saying that was what the people wanted.

32. Biblical mount where Aaron died : HOR
In the Hebrew Bible and the Qur’an, Aaron was the brother of Moses.

33. PC image acronym : JPEG
An image file on a computer can be compressed so that it takes up less space. Some time the compression is “lossless” meaning even though the file is compressed, and data it is discarded, the image still looks the same. One example of data that can be discarded without loss of quality, is to not bother recording the color information of pixels that are the same color as others. Just saying “this pixel is the same is that one” takes up less space. One can compress files even more if one allows loss of quality. One well known compression algorithm that is “lossy” is the jpeg format. The person compressing the file can decide how much quality will suffer in jpeg format, with larger, compressed files being of higher quality than the smaller ones.

40. Relatively sylphlike : SVELTER
Svelte comes to English from Latin, via the Italian “svelto” meaning “stretched out”. As if I would know anything about svelte …

46. Giant in astronomy : ORION
The very recognizable constellation of Orion is of course named after the Greek God Orion, the Hunter. If you take a look at the star in Orion’s “right shoulder”, the second brightest star in the constellation, you might notice that it is quite red in color. This is the famous star called Betelgeuse, a red supergiant, a huge star that is on its way out. It is expected to explode into a supernova within the next thousand years or so. You don’t want to miss that …

51. 1982 high-tech film : TRON
Released in 1982, “Tron” was one of the first mainstream films to make extensive use of computer graphics. The starring role is played by Jeff Bridges.

55. “That’s more than I wanted to know,” in brief : TMI
Too Much Information!

56. Andean vegetable : OCA
The plant called an oca is also known as the New Zealand Yam. The tubers of the oca are used as a root vegetable.