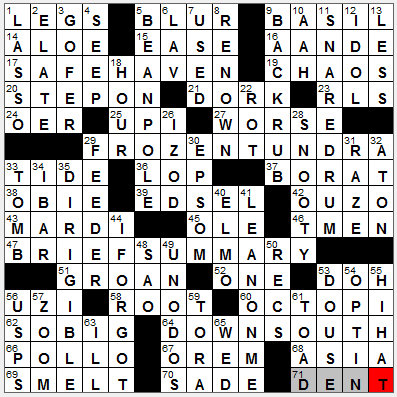 CROSSWORD SETTER: Ellen Leuschner
THEME: Redundant … each of the theme answers is a common expression consisting of two words, the first of which really isn’t needed:

9. Pesto herb : BASIL
Pesto gets its name from the Latin word for “crush”. The word “pestle”, as in mortar and pestle, is derived from the same Latin root.

14. Burn soother : ALOE
Aloe vera has a number of alternate names that are descriptive of its efficacy as a medicine. These include the First Aid plant, Wand of Heaven, Silent Healer and Miracle Plant.

15. Life of Riley : EASE
The phrase “life of Reilly” dates back to at least 1919. It may originate from a song from the 1880s about a man called O’Reilly, and how he became rich and lived an easy life.

16. “Biography” network : A AND E
The A&E television network used to be a favorite of mine, with the “A&E” standing for “arts and entertainment”. The started out airing a lot of the old classic dramas, as well as biographies and arts programs. Now there seems to be more reality TV, with one of the flagship programs being “Dog the Bounty Hunter”. A slight change of direction I’d say …

19. Pandemonium : CHAOS
The word “pandemonium” was first coined in 1667 by John Milton in his epic poem “Paradise Lost”. It is the name he invented for the capital of Hell, “the High Capital, of Satan and his Peers”.

23. “Treasure Island” monogram : RLS
Robert Louis Stevenson’s most celebrated work I’d say is “Treasure Island”, originally written as a series for a children’s magazine in 1881. I remember it as the first “real” novel I read as a youngster …

25. Wire service inits. : UPI
United Press International was one of the biggest news agencies in the world, sending out news by wire to the major newspapers. UPI ran into trouble with the change in media formats at the end of the twentieth century and lost many of its clients as the afternoon newspapers shut down due to the advent of television news. UPI, which once employed thousands of people, still exists but with only a handful of employees.

29. Icy expanse, redundantly : FROZEN TUNDRA
Tundra is an ecosystem that is treeless, or very nearly so. There are three types of tundra. Arctic and Antarctic tundra can’t support the growth of trees as the ground is pretty much frozen. Alpine tundra cannot support tree-growth due to high altitude.

37. 2006 title film character who says “Pamela! I no find you attractive anymore! … Not!” : BORAT
The full name of the 2006 “mockumentary” is “Borat: Cultural Learnings of America for Make Benefit Glorious Nation of Kazhakstan”. Borat is played by a British comedian, Sacha Baron Cohen. Not my cup of tea …

38. Theater award : OBIE
The Obies are the “Off-Broadway Theater Awards”. They are given annually, and the recipients are decided by “The Village Voice” newspaper.

39. ’50s Ford flop : EDSEL
It was Henry Ford’s son, Edsel, who gave his name to the Edsel brand of automobile, a name that has become synonymous with “failure”.

42. Anise-flavored liqueur : OUZO
Ouzo is an aperitif from Greece that is colorless and flavored with anise. It is similar to pastis from France, and also has a flavor like sambuca from Italy.

43. ___ Gras : MARDI
“Mardi Gras” translates from French as “Fat Tuesday”, and gets its name from the practice of eating rich foods on the eve of the fasting season known as Lent.

46. Feds who nabbed Capone : T-MEN
A T-man is a law-enforcement agent of the US Treasury.

Eliot Ness was the Treasury agent charged with the task of bringing down the notorious Chicago gangster Al Capone. When he took on the job in 1930, Chicago law-enforcement agents were renowned for being corrupt, on the take. Ness hand-picked 50 prohibition agents he thought he could rely on, later reducing that to a cadre of 15 and ultimately to just 11 trusted men. That 11 earned the nickname “The Untouchables”.

52. Valedictorian’s rank : ONE
A valediction is an act of taking one’s leave, from the Latin “vale dicere”, to say farewell. An example of a valediction would be the words “yours truly” at the end of a letter. And of course, the valedictorian (here in the US anyway) is the student in a graduating class that is chosen to say the final words at the graduation ceremony, a farewell to his or her classmates.

53. Play-___ (kid’s stuff) : DOH
Back in the 1930s, a manufacturer in Cincinnati produced a doughy compound that was used to clean wallpaper. Twenty years later, school-kids started using the cleaning material as a modelling compound, so the manufacturer reworked the formula, and sold it to local schools. It was given the name Play-Doh.

56. Submachine gun : UZI
The first Uzi sub-machine gun was designed in the late 1940s, by Major Uziel Gal, who gave his name to the gun.

62. 1924 Edna Ferber novel : SO BIG
Edna Ferber won the Pulitzer for her novel “So Big”, which was made into a film a few times, most famously in 1953 starring Jane Wyman.

64. Where snowbirds head, redundantly : DOWN SOUTH
“Snowbirds” are those people from Canada and the northern parts of the United States who head south for the winter, to avoid the snow.

67. Utah city : OREM
Orem, Utah was originally known as Sharon (the Biblical name), and then Provo Bench, and in 1914 it was given the family name of a local railroad operator, Orem.

68. Where the Himalayas are : ASIA
The magnificent Himalaya range of mountains in Asia takes its name from the Sanskrit for “abode of snow”. Geographically, the Himalayas separate the Indian subcontinent from the Tibetan Plateau to the north.

69. Extract metals from by heating : SMELT
Metals are found in ore in the form of oxides. In order to get pure metal from the ore, it is heated and the oxides reduced (i.e. the oxygen is removed) in the chemical process known as smelting. The oxygen is extracted by adding a source of carbon or carbon monoxide which uses up the excess oxygen atoms to make carbon dioxide, a waste product of smelting (and of course, a greenhouse gas).

70. Marquis de ___ : SADE
The Marquis de Sade was a French aristocrat with a reputation for a libertine lifestyle. He was also a writer, well known for his works of erotica. He fell foul of the law for some his more extreme practices and for blaspheming the Catholic church. On an off, he spent 32 years of his life in prison and in insane asylums.

6. W.C. : LAV
When I was growing up in Ireland, a “bathroom” was a room that had a bath and no toilet. The separate room with the commode was called “the toilet” or sometimes the W.C. (the water closet). Apparently the term closet was used because in the 1800s when people began to install toilets indoors they often displaced clothes in a “closet”, as a closet was just the right size to take the commode.

11. Military percussion instrument : SNARE DRUM
Snare drums are so called because they have a set of wire strands (called snares) stretched across the bottom surface of the drum. When the drum is struck, the snares vibrate against the bottom drumhead producing a unique sound.

26. Polo Ralph Lauren competitor : IZOD
Jack Izod was a tailor of some repute over in England, producing shirts for King George V as well as other members of the Royal Family. As Izod was about to retire, he was approached for the use of his name by an American clothing manufacturer based in New York. The brand Izod of London was introduced to America in 1938.

28. Having one’s nose in the air : SNOOTY
“Snoot” is a variant of “snout” and is a word that originated in Scotland. The derivative “snooty”, an adjective to describe a “high-hat”, someone very haughty, started out as “snouty” back in the 1850s. The idea is that someone who is snooty, or snouty, tends to look down his or her nose at the rest of the world.

30. ___ salts : EPSOM
Epsom is most famous for its racecourse, at which is run the Epsom Derby every year, one of the three races that make up the English Triple Crown. You might also have heard of Epsom salts. Epsom salts are magnesium sulfate, originally prepared by boiling down mineral waters (Epsom was indeed a spa town at one time).

35. Lighter-than-air aircraft : DIRIGIBLE
“Dirigible” is an alternative name for an airship. The word “dirigible” comes from the French word “diriger” meaning “to direct”. The idea is that a dirigible is like a hot-air balloon that can transport you in the air, but it can also be directed and steered.

40. “Tickle Me” doll : ELMO
Tickle Me Elmo was a sensational fad in the late nineties, with stores raising prices dramatically above the recommended retail price to take advantage of demand. Reportedly, prices as high as $1500 were paid at the height of the craze. The toy’s manufacturer, Tyco, originally planned to market the “tickle” toy as Tickle Me Tasmanian Devil (after the “Looney Tunes” character), but then went with “Elmo” after they bought the rights to use “Sesame Street” names.

41. 1972 Bill Withers hit whose title precedes “when you’re not strong” : LEAN ON ME
Bill Withers was working as an assembly operator while he was trying to make a name for himself in the music industry. Even as he found success with his glorious 1971 single “Ain’t No Sunshine”, he held onto his day job, worried that the music industry was unpredictable.

48. ___ Paulo, Brazil : SAO
São Paulo is the largest city in Brazil. It is also the city with the highest number of helicopters in the world. This is partly driven by the horrendous traffic jams in São Paulo, but also by the fear of kidnapping of richer citizens.

55. Pair of cymbals operated by a pedal : HI-HAT
In a drum kit, a hi-hat is that pair of cymbals that sit on a stand and are played by using a foot pedal. The top cymbal is raised and lowered by the foot pedal creating the sound.

59. When tripled, a W.W. II movie : TORA
The pre-determined code word to be used by the Japanese if they managed to achieve surprise in their attack on Pearl Harbor was tiger, or “tora” in Japanese. This gave the name to the excellent 1970 movie “Tora! Tora! Tora!”.