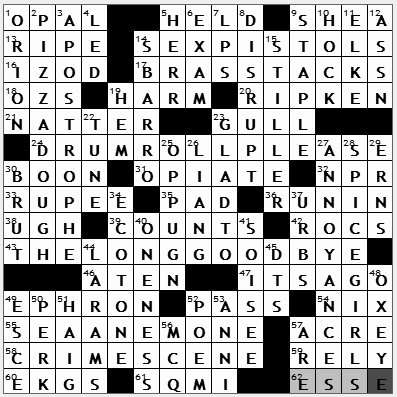 
Today’s Wiki-est, Amazonian Googlies
Across
9. Jets used to make touchdowns there : SHEA
Shea Stadium in Flushing Meadows, New York was named after William A. Shea, the man credited with bringing National League baseball back to the city, in the form of the New York Mets.

14. Group with a 1977 hit banned by the BBC, with “the” : SEX PISTOLS
The Sex Pistols were the group that introduced the punk movement to the UK, back in 1975. They were very vocal in their opposition to the social norms of the time. One of their most famous singles is “God Save the Queen”, from 1977. The words were considered so offensive that workers at the plant where the record was being pressed came out on strike rather than be associated with the song. When it was eventually released, the BBC went as far as banning the record, not something that happens very often.

16. Polo alternative : IZOD
Jack Izod was a tailor of some repute over in England, producing shirts for King George V as well as other members of the Royal Family. As he was about to retire, he was approached for the use of his name by an American clothing manufacturer based in New York. The brand Izod of London was introduced to America in 1938.

20. 1982 A.L. Rookie of the Year : RIPKEN
Cal Ripken played his entire, 20-year professional baseball career for the Baltimore Orioles. He was known as the “Iron Man” because he showed up for work every day, come rain or shine. He played 2,632 straight games, blowing past the previous record held by Lou Gehrig of 2,130 games.

23. Sucker : GULL
A gull is someone easily cheated, someone gullible.

31. Deadening agent : OPIATE
Opiates are the narcotic alkaloids found in the opium poppy plant, although some synthetic versions and derivatives of the same alkaloids are also called opiates. To produce opiates, the latex sap of the opium poppy is collected and processed. The naturally occurring drugs of morphine and codeine can both be extracted from the sap. Some synthesis is required to make derivative drugs like heroin and oxycodone.

32. Media inits. since 1970 : NPR
National Public Radio (now just called NPR) was launched in 1970, after President Johnson signed into law the Public Broadcasting Act of 1967. The intent of the act was to provide funding for radio and television broadcasting that wasn’t simply driven by profit. As longtime fan of the state-funded BBC in the UK, I’d have to agree with that intent …

33. Coin with two stalks of wheat on its reverse : RUPEE
The rupee is a unit of currency, most famously in India, Sri Lanka and Pakistan.

42. Titanic-taloned terrorizers : ROCS
The mythical roc is a huge bird of prey, reputedly able to carry off and eat elephants.

43. Film starring Elliott Gould as Philip Marlowe : THE LONG GOODBYE
Philip Marlowe was created by Raymond Chandler, and appears in his novels “The Big Sleep” and “The Long Goodbye”.

49. Writer and director of “Julie & Julia,” 2009 : EPHRON
Nora Ephron has many talents, including writing film scripts and novels. Many of the movies that she writes, she also directs. These would include some of my favorite movies of all time like “Sleepless in Seattle”, “You’ve Got Mail” and most recently, the wonderful “Julie & Julia”. And, did you know that Nora Ephron’s second marriage was to journalist Carl Bernstein of Watergate fame?

54. “Forget it!” : NIX
The use of nix as a verb, meaning “to shoot down” dates back to the early 1900s. Before that it was just the noun, meaning “nothing”. This comes from the German “nichts”, which also means “nothing”.

55. Radially symmetric creature : SEA ANEMONE
The name “anemone” means “daughter of the wind” in Greek, and at one time it was believed that the wind was what actually caused the flower to bloom. The sea anemone is named for the terrestrial plant even though it isn’t a plant at all, it’s a predatory animal found on the ocean floor.

57. Plot element? : ACRE
At one time, an acre was defined as the amount of land a yoke of oxen could plow in a day. Eventually, this was more precisely delineated as a strip of land one furlong long (660 feet) and one chain wide (66 feet). The word “furlong” is actually derived from the Old English words meaning “furrow long”, the length of the furrow plowed by the oxen.

60. Beat reporters?: Abbr. : EKGS
An EKG measures electrical activity in the heart. Back in Ireland, an EKG is known as an ECG (for electrocardiogram). We use the German name in the US, Elektrokardiogramm, giving us EKG. Apparently the abbreviation EKG is preferred as ECG might be confused (if poorly handwritten, I guess) with EEG, the abbreviation for an electroencephalogram.

62. Catonian infinitive : ESSE
Cato the Younger was a politician in the late Roman Republic, noted for his moral integrity. He is also remembered for an extended conflict with Julius Caesar.

Cato the Elder was a Roman statesman, known historically as “the elder” in order to distinguish him from his great-grandson, Cato the Younger. His ultimate position within Roman society was that of Censor, making him responsible for maintaining the census, and for supervising public morality.

Down
1. Bellatrix’s constellation : ORION
The very recognizable constellation of Orion is of course named after the Greek God Orion, the Hunter. If you take a look at the star in Orion’s “right shoulder”, the second brightest star in the constellation, you might notice that it is quite red in color. This is the famous star called Betelgeuse, a red supergiant, a huge star that is on its way out. It is expected to explode into a supernova within the next thousand years or so. You don’t want to miss that …

7. Breakable records : LPS
Vinyl records designed to play at 33 1/3 rpm were introduced by RCA Victor in 1931, but were discontinued due to quality problems. The first Long Play (LP), 33 1/3 rpm disc was introduced by Columbia Records in 1948, with RCA Victor following up with a 45 rpm “single” the following year, in 1949.

11. Actress Sommer : ELKE
Elke Sommer is a German-born actress who was at the height of her success on the silver screen in the sixties. She won a Golden Globe as Most Promising Newcomer Actress for her role opposite Paul Newman in 1964’s “The Prize”. She also sings and has released several albums. Now she focuses on painting, producing artwork that is strongly influenced by Marc Chagall.

14. Chain using lots of 2-Down : SBARRO
The Sbarro chain of pizza restaurants was founded by Italian immigrants, Gennaro and Carmela Sbarro.

15. “Tropic Thunder” director and co-star : STILLER
“Tropic Thunder” is a satirical action movie written, produced and directed by Ben Stiller. On top of all that, he stars in the film as well, alongside Jack Black and Robert Downey, Jr.

19. Line on a jumper : HEM
“Jumper” is one of those terms that caused me no end of grief when I moved to the US. I think my wife-to-be was close to dumping me on one of our first dates when she heard me talking about jumpers that I wore all the time. You see, where I come from a jumper is a sweater, and can be worn by males and females alike. The dress known as a jumper in the US, back in Ireland we’d call a pinafore, or pinafore dress.

22. Earworm, e.g. : TUNE
“Earworm” is a colloquial term used for a a catchy tune that is also somewhat irritating.

25. Question the truth of : OPPUGN
To “oppugn” is to “call into question”, coming from the Latin “oppugnare” meaning “to attack”.

26. Sixth-century Chinese dynasty : LIANG
The Liang Dynasty in China lasted from 502 to 557.

28. Sporty ensemble? : SPICE GIRLS
The five members of the English pop group the Spice Girls are:

29. Kite kin : ERNS
The ern (also erne) is also called the white-tailed eagle, and the sea-eagle.

44. They used to play at the Big A : LA RAMS
“The Big A” is the nickname of the Angel Stadium of Anaheim. It is currently the home of the LA Angels of Anaheim baseball team, and used to be home to the LA Rams of the NFL (now the St. Louis Rams).

45. Tippler’s trouble : DTS
The episodes of delirium that can accompany withdrawal from alcohol are called Delirium Tremens (the DTs). The literal translation of this Latin phrase is “trembling madness”.

56. John Wayne cop film : MCQ
“McQ” is a 1974 crime thriller set in Seattle, Washington. The movie was somewhat of a consolation prize for the star, John Wayne, as a few years earlier he was passed over for the title role in “Dirty Harry”, which of course went to Clint Eastwood.