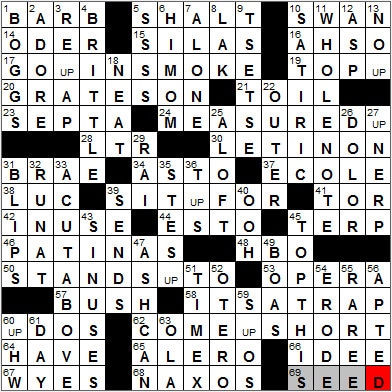 
Today’s Wiki-est, Amazonian Googlies
Across
10. “___ Lake” : SWAN
“Swan Lake” is such a delightfully light and enjoyable ballet. It tells the story of Odette, a princess turned into a swan by a sorcerer. The ballet also features Odile, Odette’s “evil twin”. Odile is disguised to look like Odette with the goal of tricking the prince to fall in love with her. In the ballet, the roles of Odette and Odile are played by the same ballerina.

14. Baltic Sea feeder : ODER
The Oder rises in the Czech Republic, and forms just over a hundred miles of the border between Germany and Poland, before eventually emptying into the Baltic Sea.

15. Villainous monk in “The Da Vinci Code” : SILAS
“The Da Vinci Code” is an excellent story, written by Dan Brown. However, Brown’s first book to feature the character Robert Langdon was even better in my opinion, “Angels & Demons”.

31. Scottish hillside : BRAE
“Brae” is a lowland Scots word for the slope or brow of a hill.

37. ___ élémentaire : ECOLE
“École élémentaire” is the French for “elementary school”.

44. This, in Toledo : ESTO
Toledo is a city in central Spain.

45. A.C.C. athlete : TERP
The sports teams of the University of Maryland are called the Maryland Terrapins, or “the Terps” for short. The name dates back to 1932 when it was first coined by the the university’s president at the time, Curly Byrd. He took the name from the diamondback terrapins that are native to the Chesapeake Bay.

46. Films, of a sort : PATINAS
Patina is the oxide film that develops on brass and similar metals over time. It’s patina that make Lady Liberty the lovely green color that she is.

53. Record store section : OPERA
The Latin for work is “opus”, with the plural being “opera”.

65. Old Olds : ALERO
The Oldsmobile Alero was the last car made under the Oldsmobile brand, produced from 1999 to 2004.

68. Greek island where Zeus was said to be raised : NAXOS
Naxos is the largest island in the Cyclades group in the Aegean Sea. According to Greek mythology, Zeus was raised in a cave on the island.

3. Prince’s partner : PAUPER
“The Prince and the Pauper” is a novel by Mark Twain, the tale of two identical boys, one a pauper living in London, and the other Edward VI, Prince of Wales and son of Henry VIII. The two switch places, and the plot develops from there.

7. How Rubik’s Cube is best solved : ALONE
What was originally called the “Magic Cube” became better known as the Rubik’s Cube, named for its inventor Ernő Rubik. It is the world’s biggest selling puzzle game, with over 350 million sold in just over 30 years.

9. Airborne African menace : TSETSE
Tsetse flies live on the blood of vertebrate mammals. The name “tsetse” comes from Tswana, a language of southern Africa, and translates simply as “fly”. Tsetse flies are famous for being carriers of the disease known as “sleeping sickness”. The disease is caused by a parasite which is passed on to humans when the tsetse fly bites into human skin tissue. If one considers all the diseases transmitted by the tsetse fly, then it is responsible for over a quarter of a million deaths each year.

11. It may be the only thing in a bar : WHOLE NOTE
A musical measure is what we in Ireland and other places refer to as a “bar”.

12. Crawling African menace : ASP
The asp is a venomous snake found in the Nile region of Africa. It is so venomous that the asp was used in ancient Egypt and Greece as a means of execution. Cleopatra observed such executions noting that the venom brought on sleepiness without any painful spasms. When the great queen opted to commit suicide, the asp’s bite was therefore her chosen method.

29. Thor Heyerdahl craft : RA I
Thor Heyerdahl was a noted Norwegian adventurer, famous for his Kon-Tiki expedition in which he sailed a raft over 4,000 miles from South America to the Tuamotu Archipelago in the South Pacific. He also sailed a boat made from papyrus called Ra II from Morocco, across the Atlantic Ocean, to Barbados.

51. Citizen rival : TIMEX
The Times Group, the manufacturer of watches, evolved from the Waterbury Clock Company that was founded in 1854 in Waterbury, Connecticut. The company achieved tremendous success in the early sixties largely due to an innovative marketing campaign. Advertisements featured the memorable tagline “Timex – Takes a licking and keeps on ticking”, and in 1962, one out of every three watches sold in the US was a Timex.

55. ___ show : RAREE
A raree show (from “rarity show”), was traditionally a display of photographs of in a closed box, with the viewer peeping through a hole. This form of entertainment became known as a peep show, and over the years the genre moved into the world of eroticism.

56. Michael who directed the Bond film “The World Is Not Enough” : APTED
English director Michael Apted’s best known work for the big screen is the Bond movie, “The World is Not Enough”.

63. Pay back? : OLA
Payola is the illegal practice of paying radio stations or disk jockeys to repeatedly play a particular piece of music. The impetus behind the crime is that the more often a song is played, the more likely it is to sell. The term “Payola” comes from the words “pay” and “Victrola”, an RCA brand name for an early phonograph.