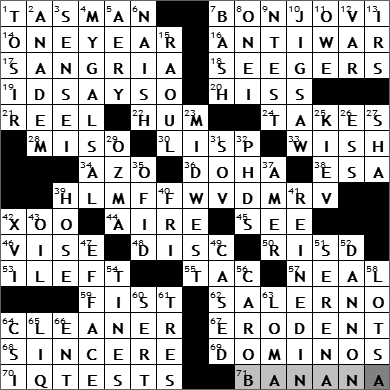 CROSSWORD SETTER: David Steinberg (only 14-years-old!)
THEME: SPOT THE CODE … all the theme answers tell us how to break the code and decipher the message “HLMF FWV DMRV” across the middle of the grid i.e. “SPOT THE CODE”:


Today’s Wiki-est, Amazonian Googlies
Across
1. Explorer Abel who discovered New Zealand : TASMAN
Tasmania is the large island lying off the southeast cost of Australia. The Dutch explorer Abel Tasman was the first European to sail past the island, in 1642. Tasman named his discovery Van Dieman’s Land after the Governor of the Dutch East Indies, Anthony van Dieman. The name was officially changed to Tasmania, after the discoverer himself, in 1856. In Australia a more familiar name used is “Tassie”.

7. Band with the 1994 platinum record “Always” : BON JOVI
Jon Bon Jovi was born John Francis Bongiovi, Jr., and he is the leader of the band that took his name, Bon Jovi.

17. Purplish drink : SANGRIA
Sangria is red wine punch, usually associated with Portugal and Spain. Recipes for sangria vary, but almost all include a robust red wine, sliced fruit, something sweet (e.g. orange juice, sugar), a spirit (e.g. brandy, triple sec), carbonated water or perhaps7up, and ice. The drink is named for its color, as “sangre” is the Spanish for blood.

28. *___ soup : MISO
Miso is the name of the seasoning that makes the soup. Basic miso seasoning is made by fermenting rice, barley and soybeans with salt and a fungus (!), to produce a paste. The paste can be added to stock to make miso soup, or perhaps to flavor tofu.

34. Kind of dye : AZO
Azo compounds have very vivid colors and so are used to make dyes, especially with the colors, red, orange and yellow.

36. Capital whose name means “big tree” in Arabic : DOHA
Doha is the capital city of the state of Qatar located on the Persian Gulf. The name “Doha” translates from Arabic as “the big tree”.

38. Hockey’s Tikkanen : ESA
Esa Tikkanen is a retired hockey player from Finland. He was on the winning team in five Stanley Cup finals, between 1985 to 1994.

42. Tic-tac-toe loser : XOO
When I was growing up in Ireland, we played “noughts and crosses” … our name for tic-tac-toe.

48. *CD part : DISC
The Compact Disc (CD) is an optical storage device that was developed for the storage and playback of music. Derivative products were later developed such as the CD-ROM for data storage, and the PhotoCd for storage of images.

57. “Hud” Oscar winner Patricia : NEAL
Patricia Neal won her Best Actress Oscar relatively late in her career, for playing the middle-aged housekeeper in 1963’s “Hud”. A few years later she was offered the role of Mrs. Robinson in “The Graduate” but turned it down. Famously, Neil had an affair with Gary Cooper who was married at the time. She became pregnant with his child but he persuaded her to have an abortion. Not long afterwards Neil married British writer Roald Dahl (of “Willy Wonka” fame) and the couple had five children together before divorcing in 1983.

62. Port on the Tyrrhenian Sea : SALERNO
Salerno is a port city on the southwest coast of Italy. In WWII, after the Italians negotiated a peace treaty with the Allies in 1943, the King of Italy relocated to Salerno from Rome. The new Italian government was set up in the city, and for a few months Salerno was “capital” of the country.

69. Big name in pizza : DOMINO’S
Domino’s Pizza started out as DomiNick’s, a pizza store on Ypsilanti, Michigan. The store was purchased by Dominic’s founder Tom Monaghan in 1960, along with his brother. Tom bought out his brother a few months later, for the price of a used VW! The store was renamed Domino’s Pizza in 1965, and two years later the first franchise store was opened. There are now over 8,000 stores worldwide, including one in Tallaght, in Ireland, the town where I lived for many years in my youth. That Tallaght store became the first Domino’s outlet in the world to hit a a turnover of $3 million a year. We Irish obviously have terrible taste when it comes to pizza …

1. Words sung “with love”? : TO SIR
“To Sir, with Love” is the theme song from the excellent 1967 film of the same name. The Scottish singer Lulu sang the song for the movie, as well as acting in it. It’s well worth a rental if you haven’t seen it.

2. Wreath for the head : ANADEM
An anadem is a wreath or garland worn around the head, derived from the Greek word for “to bind up”.

6. Two-time Oscar nominee J. Carrol ___ : NAISH
J. Carrol Naish was an actor from New York, known for supporting roles in many films as well as playing the title role on the radio show “Life with Luigi” in the late forties and early fifties. That radio show was even more popular than Bob Hope’s regular broadcasts!

13. Collection agcy. : IRS
The IRS came into being during the Civil War, to raise money to pay for war expenses. Prior to the introduction of income tax in 1862, taxation was limited to levies on trade and property.

15. French Fauvist Dufy : RAOUL
Raoul Dufy was a French painter active in the first half of the 20th century. He was classed as a “fauve”, one of the group of artists known as the “wild beasts”, who emphasized strong color over realism in their works.

25. Chicken ___ : KIEV
Chicken Kiev may indeed be a Ukrainian dish, named for the capital city of Kiev. It is a boneless chicken breast rolled around garlic, herbs and butter, breaded and deep fried. It was my Dad’s favorite …

29. Baum princess : OZMA
L. Frank Baum wrote a whole series of books about the Land of Oz, and Princess Ozma appears in all of them except the one that’s most famous, “The Wonderful Wizard of Oz”.

32. Pursuits of some candidates, for short : PHDS
PhD is an abbreviation for “philosphiae doctor”, Latin for “teacher of philosophy”.

35. “The Wizard ___” : OF ID
I am not one for comic strips to be honest, but I do love “The Wizard of Id”. It first appeared in the mid-sixties, the creation of Johnny Hart (of “B.C.” fame) and Brant Parker. The storyline is centered on the Kingdom of Id, where the King’s subjects are known as “Idiots”.

40. Night that “Dallas” aired for most of its run: Abbr. : FRI
The mega-hit TV show “Dallas” started out life as a five-part mini-series in 1978. Who can remember who it was that shot J.R.?

42. Benedict ___ (pope beginning in 2005) : XVI
How about Pope Benedict’s latest CD? His Holiness is featured singing on an album released not too long ago by the Vatican. “Alma Mater: Featuring the Voice of Pope Benedict XVI

51. Sister of Venus : SERENA
Serena Williams is the younger of the two sisters playing professional tennis. Serena has won more prize money in her career than any other female athlete.

52. Yogurt brand : DANNON
Danone is a French company that sells a wide range of food products, as well as bottled water. Here in the US Danone sells under the brand name “Dannon”. Danone owns a number of bottled waters, including Evian, Volvic and the only one that I think is worth buying, Badoit.

54. Points at the table? : TINES
The points on a fork are known as tines.

56. Fake chocolate : CAROB
The carob is a tree or shrub in the pea family, mainly grown for its seed pods. The carob seeds are dried or roasted, and when powdered or chipped make a good substitute for chocolate.

60. Spanish muralist : SERT
Josep Maria Sert was a painter of murals from Catalan, and a friend of Salvador Dali.

63. ___ Linda : LOMA
Loma Linda is a city in California located not far from Los Angeles. The name Loma Linda translates from Spanish as “Beautiful Hill”.

64. TV show with Dr. Ray Langston : CSI
The TV show “CSI” gets a lot of criticism from law enforcement agencies for its unrealistic portrayal of the procedures and science of criminal investigation. I don’t care though, as I just think it’s fun television. The original “CSI” set in Las Vegas seems to have “gone off the boil” lately, but the addition of Sela Ward to the cast of “CSI: NY” has really, really raised the level of the sister show set in New York City.

65. Kind of license: Abbr. : LIQ
That would be a liquor license.

66. One who’s often looking down in the mouth, for short? : ENT
An Ear, Nose and Throat specialist is an ENT.