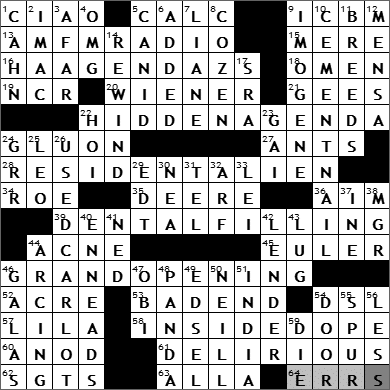 CROSSWORD SETTER: Jeffrey Wechsler
THEME: Hidden Filling Inside … the theme answers are in pairs, with the first containing a hidden word referred to in the second:


Today’s Wiki-est, Amazonian Googlies
Across
1. Parting word : CIAO
“Ciao” is the Italian for “bye-bye”. “Arrivederci” is more formal, and translates as “goodbye”.

9. SALT concern : ICBM
There were two rounds of Strategic Arms Limitation Talks and resulting treaties (SALT I & SALT II), between the US and the Soviet Union. The first round of SALT I talks were in Helsinki as far back as 1970.

16. Food product whose name is an example of “foreign branding” : HAAGEN-DAZS
Häagen-Dazs ice cream originated in the Bronx, New York in 1961. The name “Häagen-Dazs” is a “nonsense” term, words chosen for their Scandinavian feel that would appeal to potential customers in this country.

18. Straw in the wind : OMEN
Things described as “straws in the wind” are omens, indicators of what might happen in the future.

19. Big A.T.M. maker : NCR
NCR is an American company that has been in business since 1884, originally called the National Cash Register Company. The company has done well in a market where new technologies seem to be constantly disrupting the status quo.

20. Frank : WIENER
What we call a wiener in this country is known as a Vienna sausage in Germany. It was first produced by a butcher from Frankfurt who was living in Vienna, hence the name “Wiener”, German for “of Vienna”. Paradoxically, the same sausage is called a Frankfurter in Vienna, as it was created by someone from Frankfurt. It’s all very confusing …

24. Quark-binding particle : GLUON
A gluon is a hypothetical, sub-atomic particle postulated as being necessary to bind (or “glue”) together quarks, hence the name “gluon”.

34. Anonymous surname : ROE
Though the English court system does not use the term today, John Doe first appeared as the “name of a person unknown” in England in 1659, along with another unknown, Richard Roe. Joe Blow is just a variant of John Doe, and Jane Doe is an unknown female.

35. Mower maker : DEERE
John Deere invented the first commercially successful steel plow in 1837. Prior to Deere’s invention, farmers used an iron or wooden plow that constantly had to be cleaned as rich soil stuck to its surfaces. The cast-steel plow was revolutionary as its smooth sides solved the problem of “stickiness”.

36. Annie Oakley had a good one : AIM
Many regard Annie Oakley as the first American female superstar, given her celebrity as a sharpshooter in Buffalo Bill’s Wild West Show. She toured with the show all over Europe, and performed her act for the likes of Queen Victoria of England and Kaiser Wilhelm II of Germany. Supposedly, using a .22 caliber rifle from 90 feet away, Oakley could split a playing card edge-on, and shoot five or six holes in the card before it hit the ground!

44. Proactiv treats it : ACNE
Proactiv is an over-the-counter medication that is applied to acne. Its active ingredient is benzoyl peroxide.

45. Swiss 5-Across pioneer : EULER
Leonhard Euler was a brilliant Swiss mathematician and physicist, a pioneer in the fields of logarithms and graph theory.

52. Back 40 unit : ACRE
In the Public Land Survey System, land right across the country is divided into townships and sections. A section is roughly equivalent to a square mile, 640 acres. It became the practice to refer to quarter-quarter divisions of a section, with a quarter of a quarter of a section being equal to 40 acres (check the math!). From this sprung phrases like “lower 40” (nominally the lowest elevation 40 acres on a property) and the “back 40” (nominally a 40 acre parcel that was undeveloped on a property, “out the back”).

57. Oscar winner Kedrova : LILA
You might recognize Lila Kedrova from “Zorba the Greek”. She won an Oscar for playing Mme. Hortense.

63. ___ breve : ALLA
The musical term “alla breve”, meaning “at the breve (i.e. the note)”, denotes a meter equivalent to 2/2. This implies quite a fast tempo, often found in military marches.

1. “All the Way” lyricist : CAHN
Sammy Cahn wrote for them all, including Frank Sinatra, Dean Martin and Doris Day. His most famous song was probably “Three Coins in the Fountain”. He also wrote “All the Way”, made famous by Frank Sinatra.

4. Online “Unbelievable!” : OMG
Oh My Gosh! Oh My Goodness! Or any other G words you think of …

5. Jackal or coyote : CANID
A canid is a carnivorous mammal of the family Canidae, which includes foxes, wolves, dogs, jackals and cayotes.

7. Former NPR host Hansen : LIANE
Liane Hansen was the very capable host of Weekend Edition Sunday, who retired quite recently from broadcasting. She is married to a fellow NPR broadcaster, Neil Conan, although the two have announced that they are in the process of divorcing.

8. Hoodwink : COZEN
What a lovely verb, to cozen! Meaning to cheat or hoodwink, it comes from the Middle English word “cosin” meaning fraud or trickery.

9. Sid’s sidekick of early TV : IMOGENE
Famously, Imogene Coca performed opposite Sid Caesar on NBC’s “Your Show of Shows” in the fifties.

12. Top-2% organization : MENSA
If you ever learned Latin, “mensa” was probably taught to you in lesson one as it’s the word commonly used as an example of a first declension noun. Mensa means “table”. The Mensa organization, for folks with high IQs, was set up in Oxford, England back in 1946. To become a member you have to have an IQ that is in the top 2% of the population.

22. ___ polloi : HOI
Hoi polloi is a Greek term, literally meaning “the majority”. In English it has come to mean “the masses” and is often used in a derogatory sense.

25. Actor Gorcey : LEO
The actor Leo Gorcey’s most remembered role was that of the leader of the Dead End Kids, the East Side Kids and the Bowery Boys.

29. N.Y. summer hrs. : EDT
On the other side of the Atlantic, Daylight Saving Time (DST) is known as “summer time”. The idea behind summer/daylight-savings is to move clocks forward an hour in spring and backwards in the fall, so that afternoons have more daylight.

40. Diamond complements : ENNEADS
Ennead is the Greek word for “the nine”. There are nine players on a baseball team.

41. Leftorium proprietor on “The Simpsons” : NED
The Leftorium is a store in “The Simpsons”. It’s located in the Springfield Mall and is owned by Ned Flanders. It specializes in products made for left-handed people.

42. Shylock, for one : LENDER
Famously, at the climax of William Shakespeare’s “The Merchant of Venice”, Antonio goes on trial because he cannot repay a loan to Shylock of 3,000 ducats. Faced with non-payment, Shylock demands his legal right to “a pound of flesh”.

47. Piece of kabuki costumery : OBI
The sash worn as part of traditional Japanese dress is known as an obi. The obi can be tied in what is called a butterfly knot.

48. Bamboo muncher : PANDA
Taxonomic classification of the giant panda has been a subject of great debate for years, the main question being whether it belongs to the bear or raccoon family. The accepted opinion these days, based on molecular studies, seems to be that the panda is in fact a true bear.

49. Ford who was the son of Henry Ford : EDSEL
It was Henry Ford’s son, Edsel, who gave his name to the Edsel brand of automobile, a name that has become synonymous with “failure”.

51. Home of Bollywood : INDIA
Bollywood is an informal name given to the huge film industry based in Mumbai in India. The term “Bollywood” is a melding of “Bombay”, the old name for Mumbai, and of course Hollywood.

59. Last word of Romeo or Juliet : DIE
In Shakespeare’s “Romeo and Juliet”, the last words uttered by Romeo are: