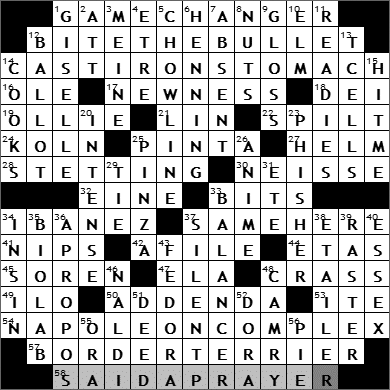 
Today’s Wiki-est, Amazonian Googlies
Across
1. Cause of a paradigm shift : GAME CHANGER
We tend to use “paradigm” to mean the set of assumptions and practices that define some aspect of life. It can also simply mean something that serves as a model, pattern or example. “Paradigm” ultimately comes from the Greek word for “show side by side”.

16. Stadium support? : OLE
“Ole Ole Ole!” is chanted at soccer games by many Spanish-speaking (or -shouting) fans. I am very proud to claim that the fans of the Irish national team have adopted the chant as their own, and it can be heard practically non-stop when Ireland is playing (with some inventive melody behind it!).

19. Disney animator Johnston who received the National Medal of Arts : OLLIE
Walt Disney referred to the core group of animators that worked on his most famous productions as his “Nine Old Men”. This was a play on a quotation from Franklin D. Roosevelt who referred to the US Supreme Court Justices using the same expression. The last of Disney’s Nine Old Men to survive was Ollie Johnston, who passed away in 2008.

21. Civil Rights Memorial designer : LIN
The Civil Rights Memorial in Montgomery, Alabama remembers forty people who died over the years in the struggle for equal rights between 1954 (the year of the Brown v. Board of Education decision) and 1968 (the year Martin Luther King was assassinated). The memorial was designed by Maya Lin, whose most famous work is the Vietnam Veteran’s Memorial in Washington, D.C.

24. ___ Bonn Airport : KOLN
Cologne is the fourth largest city in Germany, and is called “Koln” in German.

25. One of a sailing trio : PINTA
As we all know, Christopher Columbus used three ships in his first voyage across the Atlantic: the Santa Maria, the Niña and the Pinta. The Pinta was the fastest of the three, and it was from the Pinta that the New World was first spotted, by a sailor on lookout called Rodrigo de Triana. Pinta was a nickname (as was Niña), meaning “the painted one”. The Pinta’s real name has been lost in mists of time.

28. Opting not to strike out? : STETTING
“Stet” is the Latin word meaning “let it stand”. In editorial work, the typesetter is instructed to disregard any change previously marked by writing the word “stet” beside the change and then underscoring the change with a line of dots or dashes.

30. German/Polish border river : NEISSE
There are three significant rivers with the name Niesse in Europe. The longest of these is referred to as the Lusatian Niesse as it passes through the region of Lusatia. The river was used to define part of the border between Germany and Poland after WWII in the Potsdam Agreement of 1945.

33. Smithereens : BITS
“Smithereens” is such a lovely word, and I am proud to say that it comes from Irish. The Irish word “smiodar” means fragment. We add the suffix “-in” (anglicized as “-een”) to words to indicate the diminutive form. So, “little fragment” is “smidirin”, anglicized as “smithereens”.

34. Longtime guitar brand : IBANEZ
Ibanez is a brand of guitar from Japan. Ibanez guitars are named after the Spanish guitar maker Salvador Ibáñez, who plied his trade in the late 1800s and early 1900s.

45. Philosopher Kierkegaard : SOREN
Soren Kierkegaard was a Danish philosopher and theologian, and I never really understood anything I’ve read about him!

47. She, in São Paulo : ELA
São Paulo is the largest city in Brazil. It is also the city with the highest number of helicopters in the world. This is partly driven by the horrendous traffic jams in São Paulo, but also by the fear of kidnapping of the richer citizens.

49. Grp. with a “decent work” agenda : ILO
The ILO (International Labour Organization) is now an agency administered by the UN, but it was established by the League of Nations after WWI. The ILO deals with important issues such as health and safety, discrimination, child labor and forced labor. The organization was recognized for its work in 1969 when it was awarded the Nobel Peace Prize.

54. Tendency to overcompensate for a perceived shortcoming : NAPOLEON COMPLEX
“Napoleon complex” is an informal term, applied usually to men who are perceived as overcompensating for being short in stature. The idea is that Napoleon Bonaparte’s drive for power and conquest was perhaps derived from his own obsession with his lack of height.

57. Hunter with rough hair : BORDER TERRIER
Border Terriers take their name from the Scottish borders, where they were bred to hunt small game and to kill rodents.

1. 2007 Disney princess : GISELLE
“Enchanted” is actually quite an entertaining Disney film, the story of the Princess Giselle who is forced from her animated world to live in the real world of New York City.

5. Waiters in a mess : CHOW LINE
“Chow” is an American slang term for food, that originated in California in the mid-1800s. It comes from Chinese pidgin English “chow-chow”, meaning “food”.

“Mess” first came into English about 1300 and described the list of food needed for a meal, from the Old French word “mes” which was a portion of food, or a course at a meal. This usage in English evolved into “mess” meaning a jumbled mass from the concept of “mixed food”. At the same time, the original usage in the sense of a food for a meal surfaced again in the military in the 1500s where a “mess” was a communal eating place.

6. “World of Magic” Emmy nominee : HENNING
Doug Henning was a Canadian magician, from Winnipeg, Manitoba. In the seventies he made a whole series of annually broadcast specials for NBC called “Doug Henning’s World of Magic”.

9. Brief explanation : GLOSS
A “gloss” is a brief note in a manuscript, usually written into the margin, that provides further explanation or perhaps a translation.

10. The Liberty Tree, for one : ELM
The original Liberty Tree was an elm tree that stood near Boston Common, and marked the place where folks would rally in the build up to the American Revolution.

13. Immune system circulators : T CELLS
T cells are a group of white blood cells that are an essential component of the body’s immune system. An antigen is a molecule recognized by the immune system, one that can be chemically bound and neutralized by an antibody. An antigen used to be called an “ANTI-body GEN-erator”.

23. High-tech scam artist : PHISHER
Phishing is the name given to the online practice of stealing user names, passwords and credit card details by pretending to be a reliable and trustworthy entity. Phishers often send out safe-looking emails or instant messages that direct someone to an equally safe-looking website where the person might inadvertently enter sensitive information. “Phishing” is a variant of the word “fishing”, as in “fishing” for passwords, PIN numbers etc.

25. Singer with a short-lived 1950s sitcom : PINZA
Ezio Pinza was an opera singer from Italy. He performed for many years with the Metropolitan Opera in New York, before retiring from the Met in 1948. He then launched a career on Broadway and in Hollywood.

26. Manga set in motion : ANIME
Anime is animation in the style of Japanese Manga comic books.

The Japanese word “manga” means “whimsical pictures”, and is an apt term to describe the Japanese style of comic book. Manga publications are more diverse than American comic books, and have a larger audience. Manga cover many subjects including romance, sports, mystery, business, horror, and mystery.

31. When French fans circulate? : ETE
French circulating fans might be moving the warm air in the summer (“été”).

36. Regarding : APROPOS
Apropos comes into English directly from French, in which “à propos” means “to the purpose”.

38. Site-specific merchant? : ETAILER
Etail is the term used these days for online shopping. It is often compared to regular shopping in the “real world”, by juxtaposing it with a “brick and mortar” store.

39. Scan lines on a monitor : RASTER
Images are captured and reconstructed in television using “raster scanning”. The name “raster” comes from the Latin “rastrum” meaning “rake”. The pattern of parallel lines left by a rake scraping across the dirt illustrates the technique used in television technology. Television images are displayed line by line, very quickly, really just like one reads a page in a book. The image is constructed from the top left, proceeding across the top of the screen. Then the next line is projected, starting again at the left and moving right. Then the next line, and the next, until the whole image is displayed. Then the process starts all over again.

43. Accessory for Sinatra : FEDORA
A fedora is a lovely hat, I think. It is made of felt, and is similar to a trilby but has a broader brim. “Fedora” was a play written for Sarah Bernhardt and first performed in 1889. Bernhardt had the title role of Princess Fedora, and on stage she wore a hat similar to a modern-day fedora. The play gave rise to the women’s fashion accessory, the fedora hat, commonly worn by women into the beginning of the twentieth century. Men then started wearing fedoras, but only when women gave up the fashion …

46. Actress Nita who never made a talkie : NALDI
Nita Naldi was an American silent film actress, who usually played a “femme fatale” type of role.

48. Prius alternative : CAMRY
The Toyota Prius is still the most fuel-efficient, gasoline-powered car sold in the US, according to the EPA. The name “Prius” is a Latin word meaning “ahead, leading”. In the US we pronounce the name “pree-us”, but across the Atlantic it’s pronounced “pry-us”.

52. Pseudonym of a noted Freud patient : DORA
“Dora” was the pseudonym that Sigmund Freud gave to one of his patients called Ida Bauer, whom he diagnosed with hysteria. He used the pseudonym in writing about the case to preserve her anonymity. He chose that particular name as growing up his sister’s nursemaid had to surrender her own name of Rosa to avoid confusion with Rosa, Freud’s sister. The nursemaid chose the name Dora.