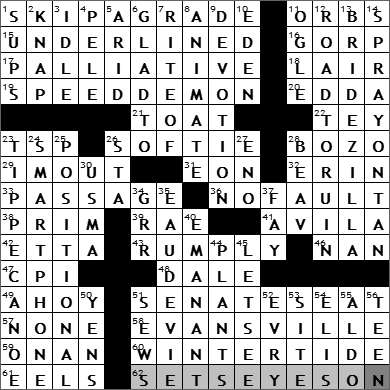 
Today’s Wiki-est, Amazonian Googlies
Across
16. Nutty stuff : GORP
“Gorp” is the name sometimes used for trail mix, particularly by hikers. It’s not really known for sure how this name came about, but some say it stands for “good old raisins and peanuts” or perhaps “gobs of raw protein”.

20. Poetic work with an account of Ragnarok : EDDA
The Poetic Edda and Prose Edda are two ancient works that are the source for much of Norse mythology.

Ragnarök is the name given to a set of events in Norse mythology that resulted in the deaths of many famous gods including Odin and Thor.

28. Numbskull : BOZO
A “bozo” is a man with a low IQ, and one who is usually quite muscular. We’ve been using the word since the early 1900s and it possibly comes from the Spanish “bozal” that was used to describe someone who speaks Spanish poorly.

32. ESPN reporter Andrews : ERIN
Erin Andrews is a sports reporter. I don’t watch much sports but do know Ms. Andrews for her appearances on “Dancing with the Stars” in 2010. She did quite well and made it to the final of the show.

36. Like some insurance : NO-FAULT
In a no-fault automobile insurance arrangement, the party injured is paid damages by his or her own insurer regardless of who is responsible for the accident.

39. Scottish doctor/explorer John : RAE
John Rae was a Scottish explorer, who took on the task of searching for the ill-fated Franklin Expedition of 1845. The Franklin Expedition was itself searching for the elusive Northwest Passage through the Arctic Ocean connecting the Atlantic to the Pacific. John Rae created much controversy back in England when he reported evidence of cannibalism among the ill-fated Franklin explorers.

41. Teresa’s home : AVILA
St. Teresa of Avila (also known as St. Teresa of Jesus) was a Carmelite nun living in Spain in the 1500s. She is particularly noted for her writings on Christian meditation and mental prayer.

42. “Pushover” singer James : ETTA
Etta James is best known for her beautiful rendition of the song “At Last”. Sadly, as she discloses in her autobiography, James has lived a life that has been ravaged by drug addiction, leading to numerous legal and health problems.

46. Sop for aloo palak : NAN
In an Indian restaurant, naan bread is very popular. Naan is traditionally baked in a clay oven known as a tandoor.

Aloo palak is an Indian dish consisting of fried potatoes (aloo) dipped in a spinach curry.

47. Cost-of-living no. : CPI
The Consumer Price Index (CPI) measures changes in the price of services and goods purchased by households. The United States CPI fell in 2009, for the first time since 1955. That’s how bad the recession was two years ago …

48. Norman ___, coach in “Hoosiers” : DALE
“Hoosiers” is an excellent sports movie about a small-town high school team in Indiana that wins the state basketball championship. The team coach is Norman Dale, played by Gene Hackman. The film is inspired by the true story of Milan High School which won the 1954 championship.

58. City on the Ohio : EVANSVILLE
Evansville, Indiana is the largest city in the southern part of the state. It sits on a bend of the Ohio River, and is sometimes known as “River City”.

60. “Snow-Bound” setting : WINTERTIDE
“Snow-Bound: A Winter Idyl” is a poem by John Greenleaf Whittier. It tells of a family trapped in their New England home by a snowstorm for three days.

61. Creatures with electrocytes : EELS
Electrophorus electricus is the biological name for the electric eel. Despite its name, the electric “eel” isn’t an eel at all, but rather what is called a knifefish, a fish with an elongated body related to the catfish. The electric eel has three pairs of organs along its abdomen, each capable of generating an electric discharge. The shock can go as high as 500 volts with 1 ampere of current (that’s 500 watts), and that could perhaps kill a human.

Down
2. Chip, as flint, in Britain : KNAP
To knap is to chip at a stone or flint to fashion a sharp edge for use so that it can be used as a tool.

4. Athlete nicknamed “O Rei” : PELE
Pelé is the nickname of Edison de Nascimento, who has gone by the name Pelé for most of his life. He is now retired, and for my money was the world’s greatest ever soccer player. He is the only person to have been part of three World Cup winning squads. Pelé is a national treasure in his native Brazil.

10. Its entrance was barred with a flaming sword : EDEN
According to the Book Of Genesis, Adam and Eve lived in a garden “in” Eden, with Eden being geographically located by reference to four rivers, including the Tigris and Euphrates. Some scholars hypothesize that Eden was located in Mesopotamia, which encompasses much of modern-day Iraq.

13. Certain control freak : BRIDEZILLA
A bridezilla is a difficult and demanding bride, with the term first used in 1995 in “The Boston Globe”.

23. 1811 battle site : TIPPECANOE
The Battle of Tippencanoe was fought in 1811 in the Indianan Territory by US forces and the American Indian confederation. Leader of the victorious US side was then-Governor William Henry Harrison, later to become President of the United States.

24. Android runner, e.g. : SMARTPHONE
Android is the operating system (and more) for mobile devices that is now owned by Google.

27. Generative music pioneer : ENO
Brian Eno started out his musical career with Roxy Music. However, his most oft played composition (by far!) is Microsoft’s “start-up jingle”, the 6-second sound you hear when the Windows operating system is booting up.

28. Wally’s bro : BEAV
We used to see a lot of American television programming growing up in Ireland, but “Leave It to Beaver” was one show that didn’t make it across the Atlantic. I’ve seen a couple of episodes, and I am not sure it would travel well. The show went on the air for the first time the day that Sputnik was launched by the Russians, and aired its last show just a few months before President Kennedy was assassinated. An iconic series, by all accounts.

30. Sch. whose alumni constitute the Long Gray Line : USMA
The US Military Academy has a traditional hymn called “The Corps”. There is a phrase in the lyrics of the hymn, “the long gray line”. Graduates of the academy use this phrase to refer to themselves.

37. Elfin : FAY
Something elfin or fay is like an elf or a fairy.

50. Impulses : YENS
The word “yen”, meaning “urge”, has been around in English since the very early 1900s. It comes from the earlier word “yin” imported from Chinese. ”Yin” was used in English to describe an intense craving for opium!

52. “Lift ___ Voice and Sing” (old hymn) : EV’RY
“Lift Every Voice and Sing” is a hymn originally written as a poem By James Weldon Johnson and set to his music by his brother John Rosamond Johnson. It was first performed in 1900 for the holiday honoring Lincoln’s Birthday. The song is often called the “The African-American National Anthem”.

54. Home of the ancient Olympic games : ELIS
Elis is a region of Ancient Greece, in the south of the country. It was home to the first Olympic Games, supposedly held in 776 BCE, at Olympia.

55. Author/architect Buzzi : ALDO
Aldo Buzzi was an Italian author and architect. He was most noted for his books on travel and gastronomy.

56. Romeo or Juliet : TEEN
In Shakespeare’s “Romeo and Juliet”, it is explicitly stated that Juliet is 13 years of age, and the assumption is that Romeo is perhaps a little older.