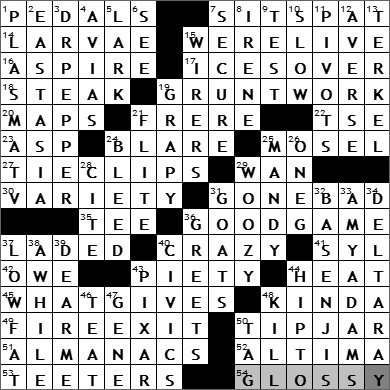 
Today’s Wiki-est, Amazonian Googlies
Across
1. Organ appendages : PEDALS
The pedal keyboard on an organ is the keyboard that is played using the feet. Usually the pedals control the lower notes, the bass line of a piece of music.

14. Some creepy crawlers : LARVAE
The larval stage of an animal is its early life, before it metamorphoses into an adult. Typically it’s insects and amphibians that go through a larval stage.

18. It can be round or cubed : STEAK
A round steak comes from the rump of a cow, which is why it’s called a rump steak back in the British Isles.

19. Job for base pay? : GRUNT WORK
“Grunt” is slang for an infantryman in the US military.

23. Animal ordered to “be angry, and dispatch,” in Shakespeare : ASP
In William Shakespeare’s play “Antony and Cleopatra”, the heroine of the piece addresses the asp as she uses the snake to commit suicide:

The asp is a venomous snake found in the Nile region of Africa. It is so venomous that the asp was used in ancient Egypt and Greece as a means of execution. Cleopatra observed such executions noting that the venom brought on sleepiness without any painful spasms. When the great queen opted to commit suicide, the asp’s bite was therefore her chosen method.

25. German region known for viticulture : MOSEL
In Germany there are thirteen regions that are officially defined as producers of “quality wines”. The best known of these regions is Mosel, which takes its name from the Moselle River. Mosel is the most prestigious region, but only the third largest in terms of production. And most of that production comes from the Riesling grape.

37. Weighed down : LADED
The verb “lade” meaning “to load” comes from an Old English word “hladan”. Lade also used to mean “to draw water”, and gave us our word “ladle”. So, lade and ladle, are close cousins.

44. Kind of index : HEAT
The heat index combines air temperature and relative humidity, an attempt to measure the relative temperature that is actually perceived by a person. The idea is that temperatures are perceived by us as being higher if accompanied by high humidity. This is because when humidity is high the body finds it more difficult to cool itself by perspiring.

52. Nissan’s first hybrid vehicle : ALTIMA
Nissan has been making the Altima since 1993. In 2007 the company started to produce a hybrid version, Nissan’s first foray into the hybrid market and a successful one by all accounts. Altima hybrids are even used as police cruisers by the New York Police Department.

1. It’s hung on the wall of a sports bar : PLASMA TV
A plasma display television is a flat panel made up of tiny little cells containing a special mix of gases and a little mercury. When a voltage is applied to any cell the gases form a plasma that gives off light, just like a fluorescent bulb. It’s this “plasma” phenomenon that gives this type of television its name.

3. Product whose name lost its period in the 1950s : DR PEPPER
Dr Pepper was introduced in 1885 in Waco, Texas, one year before the competing Coca-Cola was released to the market.

4. Some sneakers : AVIAS
The Avia brand name for athletic shoes was chosen as “avia” is the Latin word for “to fly”, and suggests the concept of aviation.

6. Match, as a contribution? : SEE
In a game of poker say, a contribution to the pot might be matched, and the matching player can say, “I’ll see you.”

8. Broadway musical of 1919 and 1973 : IRENE
The Broadway musical “Irene” is based on a play by James Montgomery called “Irene O’Dare”. When the musical opened for the first time, in 1919, it ran for 675 performances, a record for Broadway that stood for nearly 20 years. The show was revived in 1973, with Debbie Reynolds in the title role, and ran for 594 performances.

Studs Terkel was an author, historian and broadcaster. Terkel won a Pulitzer in 1985 for his book “The Good War”, an oral history of WWII consisting of interviews he conducted with many ordinary people about their experiences during the conflict.

15. Linemen : WIRERS
A lineman is a worker who specializes in the rigging and maintenance of telephone and electric power lines. According to the Glen Campbell hit “Wichita Lineman” from 1968, a lonely lineman can be missing his loved one that he hears “singing in the wire”. Presumably, the absent lover can be heard in the vibration caused by the wind blowing through the wires.

21. Top-___ : FLITE
The Top-Flite brand is currently owned by Calloway, picked up when Spalding’s golf division went bankrupt in 2003.

25. Title woman in a 1975 #1 hit : MANDY
“Mandy” is a song recorded by Barry Manilow in 1974, written by Scott English and Richard Kerr. Manilow changed the title from the original “Brandy” for his recording, to avoid confusion with a song called “Brandy” released a couple of years earlier.

26. Pull from the ground, quickly? : ONE-G
The force of gravity that we all feel is referred to as 1G. As gravity is actually an accelerating force, we often measure acceleration in general relative to the force of gravity. So if we are sitting in a vehicle that accelerates at 3G, then we will experience a force that is three times that which we experience from the gravitational pull of the earth.

31. Womanizers : GOATS
Womanizing men have been known as “goats” since the late 1600s.

32. Barkless dogs : BASENJIS
The Basenji is a breed of dog that originated in central Africa. The Basenji has an unusually shape to its larynx resulting in a “bark” that has been described as a yodel, more usually called a “barroo”. So the Basenji is known as the “Barkless Dog”.

33. “Doubt” co-star, 2008 : AMY ADAMS
Amy Adams is an American actress. The best movie I’ve seen her in is the outstanding “Julie & Julia” in which she acted alongside Meryl Streep. I highly recommend this truly delightful film.

34. Emission in a cloud chamber : DELTA RAY
A cloud chamber is used for the visual detection of ionizing radiation. It consists of a sealed container (with a glass wall) with a saturated vapor inside. When alpha or beta radiation passes through the vapor, particles of the vapor are ionized causing localized condensation to take place (formation of a cloudy streak) and the track of the radiation can be seen. Sometimes the main track, particularly for a large alpha particle, can have small branches coming off it. These branches indicate that the alpha radiation has knocked electrons out of some atoms in the vapor, and these electrons create their own small tracks. Such secondary radiation is known as a delta ray.

43. Entertainment giant with a 1995 I.P.O. : PIXAR
Pixar Animation Studios started out as part of Lucasfilm in 1979, George Lucas’s production company. Lucas sold what was to become Pixar to Apple CEO Steve Jobs in 1986. Pixar produced its first feature film in 1995, the fabulous “Toy Story”, and followed up with a string of hits. The company was then sold to Walt Disney in 2006, when valued at $7.4 billion. That transaction resulted in Steve Jobs becoming the biggest shareholder in Walt Disney.