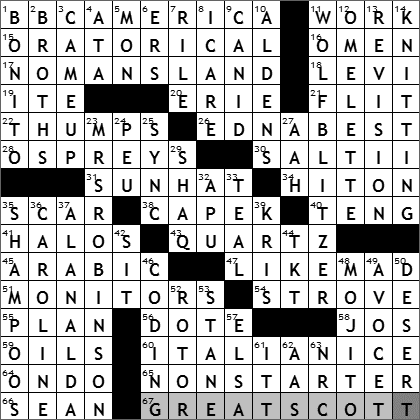 
Today’s Wiki-est, Amazonian Googlies
Across
1. Network since 1998 : BBC AMERICA
BBC America is one of my favorite television networks (as you might imagine!). It is owned by the BBC, although it shows more that just BBC shows, and includes shows bought from other British networks and a little American programming as well. Some of my favorites on BBC America are: “Law and Order UK”, “The Graham Norton Show”, “Top Gear” and “The Tudors”.

11. A bummer for bums : WORK
Terms that are often used interchangeably are hobos, tramps and bums, but they really aren’t the same thing. Hobos differed from “tramps” and “bums”, in that “bums” refused to work, “tramps” worked when they had to, while “hobos” traveled in search of work.

15. Like feats of Clay? : ORATORICAL
Henry Clay was a statesman from Kentucky well known for his gift as an orator. He was very persuasive in his arguments in favor of war with Britain resulting in the War of 1812. In 1957, a Senate committee chaired by John F. Kennedy declared Henry Clay one of the five greatest senators in American history.

17. Unclaimed stretch : NO MAN’S LAND
No man’s land is the name given to the unoccupied area between two opposing forces that are in conflict.

19. Suffix with 43-Across : -ITE
(43. What a crystal ball gazer sees : QUARTZ)
Sandstone is a sedimentary rock. When sandstone is subject to heat and pressure it can turn into the metamorphic rock, quartzite.

20. View from Presque Isle : ERIE
Presque Isle State Park is off the coast of Erie, Pennsylvania, sitting on a peninsula that juts out into Lake Erie. The name “Presque Isle” translates from French as “peninsula”, or more literally “almost an island”.

26. “The Man Who Knew Too Much” co-star : EDNA BEST
Alfred Hitchcock made two versions of the film “The Man Who Knew Too Much”. The first was made in 1934 while Hitchcock still lived in England. It starred Leslie Banks, Edna Best and Peter Lorre in his first English-speaking role. Hitchcock remade the original in 1956, with James Stewart and Doris Day playing the leads. And by the way, in that movie Doris Day sang the Oscar-winning song “Que Sera, Sera”.

28. Seattle sea hawks : OSPREYS
The Osprey is also known as the sea hawk or fish eagle.

30. 1979 negotiation : SALT II
There were two rounds of Strategic Arms Limitation Talks between the US and the Soviet Union, that resulted in the treaties SALT I (signed in 1972) and SALT II (signed in 1979).

35. Protruding rock : SCAR
The word scar, meaning a mark on the skin, and scar meaning a bare rocky place or a protruding isolated rock, each has a different etymology. The scar on the skin comes from an Old French word, and the rock scar comes from the Old Norse “sker” meaning a low reef.

40. Singer/songwriter Vienna ___ : TENG
Vienna Teng is the stage name of Cynthia Yih Shih, a Taiwanese American pianist and singer. If you listen to her album “Warm Strangers” there is a hidden track called “Green Island Serenade”, which is performed in Mandarin Chinese.

43. What a crystal ball gazer sees : QUARTZ
Early crystal balls were made out of beryl, and then the more transparent “rock crystal” (quartz). The cheaper, modern crystal balls are usually made of glass.

45. Source of “coffee” and “cotton” : ARABIC
It’s possible that “coffee” comes from the Arabic “qahwah”, a word that may have meant coffee, or even wine.

Our word “cotton” comes to us via Old French from the Arabic “qutn”.

60. Cooler in the summer : ITALIAN ICE
A sno-cone (also “snow cone”) is just a paper cone filled with crushed ice and topped with flavored water. Italian ice is similar, but different. Whereas the flavoring is added on top of the ice in a sno-cone, Italian ice is made with ice that is flavored before the water is frozen.

66. Roger’s predecessor as 007 : SEAN
Sean Connery wasn’t the first choice for the role of James Bond. Six potential actors were selected for a screen test, after which a 28-year-old model was chosen called Peter Anthony. It turned out that Anthony wasn’t up to the part, and so second-choice Connery was given a call.

67. “Holy mackerel!” : GREAT SCOTT
One possible origin of the exclamation “great Scott!” is a commander-in-chief of the US Army during the Civil War, Winfield Scott. Scott was “great” in the sense that he was a big man, weighing over 300 pounds in his later years, and apparently too heavy to ride a horse.

Down
1. Mackerel family member : BONITO
Bonito is the name given to several species of fish, intermediate in size between mackerel and tuna. The name comes directly from the Spanish word for “pretty”. In some parts of Spain, tuna is known as “Benito del Norte”.

2. Matzo balls soak them up : BROTHS
Matzo is a unleavened bread, that is very brittle. The bread is crushed, creating Matzo meal that is then formed into balls using eggs and oil as a binder. The balls are usually served in a chicken stock.

9. Jackal, e.g. : CANID
A canid is a carnivorous mammal of the family Canidae, which includes foxes, wolves, dogs, jackals and cayotes.

11. Emmy-winning U.S. journalist born in Germany : WOLF BLITZER
Wolf Blitzer is the son of Jewish refugees from Poland. He was born in Augsberg in Germany and was given the name “Wolf” in honor of his maternal grandfather. Wolf came with his family to live in the US, and he was raised in Buffalo, New York.

14. Madame Defarge’s sinister craft : KNITTING
Madame Thérèse Defarge is a character in the Charles Dickens novel “A Tale of Two Cities”. As part of her role in the story, Mme. Defarge sits knitting while observing the guillotine doing its macabre work.

23. “Here’s to you” recipient : MRS ROBINSON
When Mike Nichols was making the 1967 film “The Graduate”, by all accounts he became obsessed with the music of Simon and Garfunkel who were just coming into the limelight. Nichols made a deal with Paul Simon to write three songs that he could use on the soundtrack of his new movie. Simon and Garfunkel were touring constantly around that time, so Nichols had to badger Simon to hold up his end of the bargain. When he was ready to lay down the film’s soundtrack, there was only one commissioned song available, so Nichols had to basically beg Paul Simon for anything. Simon mentioned that he was finishing up one new song, but it wasn’t written for the film, and was more a celebration former times, with lyrics about baseball great Joe DiMaggio and former First Lady, Mrs. Roosevelt. Nichols informed Simon that the song was no longer about Mrs. Roosevelt. It was about Mrs. Robinson …

29. Center in size 22 shoes : SHAQ
Shaquille O’Neal is one of the heaviest players ever to have played in the NBA (weighing in at around 325 pounds). Yep, he’s a big guy … 7 foot 1 inch. He is also the oldest player active in the NBA today, pushing 40 years old.

32. “The ___ Trilogy” (1955-59 film series) : APU
Satyajit Ray was a Bengali film maker, famous for directing “The Apu Trilogy”. These were three Bengali films that were released between 1955 and 1959. They featured music composed by Ravi Shankar, and are considered to be some of the greatest movies of all times by international critics, yet they were filmed on tiny budgets.

36. Camelot girl : CAROLINE
The early days of the presidency of John F. Kennedy earned the nickname “Camelot”. This was largely due to the charisma exhibited by the First Family, and the relatively good times enjoyed by the country in the opening year of the Kennedy administration.

37. “The Aviator” Oscar nominee : ALAN ALDA
“The Aviator” is a great film from 2004, a biographical piece about much of the life of aviation pioneer Howard Hughes. Leonardo DiCaprio plays the title role, with Cate Blanchett playing a very credible Katharine Hepburn, Hughes’ lover with whom he lived for quite some time. Blanchett won a very much deserved Oscar for Best Supporting Actress for her performance. Alan Alda received an Oscar nomination as a supporting actor, playing Senator Owen Brewster, a thorn in the side for Howard Hughes.

46. DNA’s function : CODING
I’ve always been fascinated by the fact that the DNA of living things is so very similar across different species. Human DNA is almost exactly the same for every individual (to the degree of 99.9%). However, those small differences are sufficient to distinguish one individual from another, and to determine if individuals are close family relations.

48. Highball with white rum : MOJITO
A Mojito is a Cuban cocktail, although the exact origins appear to be unclear, as does the derivation of the name. Want one? Put 4 mint leaves in a glass, and add the juice of half a lime and a teaspoon of powdered sugar. Muddle the ingredients, smashing them together with a muddler or a spoon. Add some crushed ice, two ounces of white rum and stir. Top with a couple of ounces of club soda, and garnish with a sprig of mint. Cheers!

49. Pied wader : AVOCET
The avocet is found in warm climates, usually in saline wetlands where it uses its up-curved bill to sweep from side-to-side in water searching for aquatic insects on which it feeds. Avocets, and other similar species, may go by the common name of “stilts”, a moniker applied to them because of their long legs.

52. Apache topper : ROTOR
The 4-bladed Apache helicopter was introduced in 1975 as a replacement for the 2-bladed Cobra.

53. ___ Street (road from London Bridge to Chichester) : STANE
Stane Street is the modern name given to an old Roman road that ran between London and Chichester, a distance of almost sixty miles. The name “Stane” is an old spelling of the word “stone”, a reference to the fact that the Roman road was paved, as opposed to the muddy tracks that were used before the Roman conquest of Britain.

57. Supermodel Benitez : ELSA
Elsa Benítez is a Mexican model, known for her appearances in the “Sports Illustrated Swimsuit Issue”. For a few years she was married to NBA player Rony Seikaly, someone I remember watching play for Syracuse when I lived there.

61. TV’s Cousin ___ : ITT
In the television sitcom “The Addams Family”, the family had a frequent visitor, Cousin Itt. Itt is a short man, with long hair that runs from his head to the floor. Itt was played by Italian actor Felix Silla.

62. Some remote power sources : AAS
AA batteries might be powering your remote control.

63. Org. concerned with radiation : NRC
The Nuclear Regulatory Commission oversees most aspects of the safety of nuclear power plants and nuclear fuel in the US. I’d say they’ve been pretty busy since the onset of the tragedy in Japan after the tsunami.