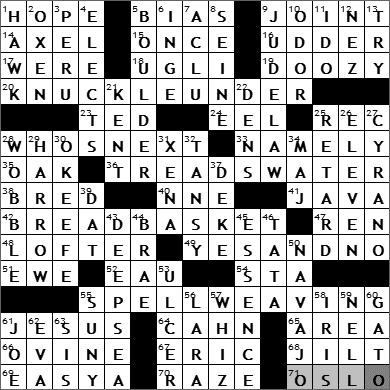 69A. No-brainer class, an example of which is named by combining the ends of 20-, 36-, 42- and 55-Across : EASY A
20A. Consent reluctantly : KNUCKLE UNDER
36A. Is active without making progress or falling behind : TREADS WATER
42A. Main food-supplying region of a country : BREADBASKET
55A. Wizardry : SPELL WEAVING

1. Word on a 2008 Obama poster : HOPE
The iconic poster widely seen in the 2008 presidential election features a stylized portrait of Barack Obama above the word “HOPE”. It was designed by the artist Shephard Fairey, but it wasn’t a work commissioned by the Obama campaign. The original image was just the portrait, very much reminiscent of a famous Che Guevara poster of the sixties. As Fairey sold more and more of the posters, he was asked by the campaign to include the word “HOPE”, which he did quite gladly. You can now see one of the original collages drawn by Fairey in the Smithsonian’s National Portrait Gallery.

5. Subject for a media ombudsman : BIAS
“Ombudsman” is a Swedish word, literally translated as “commission man”. We use the term for someone who investigates complaints between aggrieved parties, and mediates settlements.

14. Jump in a rink : AXEL
An Axel is a forward take-off jump in figure skating. It was first performed by Norwegian Axel Paulsen at the 1882 World Figure Skating championships.

No one knows for sure how the limerick got its name, although there does seem to be agreement the name does indeed come from the city or county of Limerick in Ireland.

18. Hybrid citrus fruit : UGLI
The ugli fruit is a hybrid of an orange and a tangerine, first discovered growing wild in Jamaica, where most ugli fruit comes from today.

19. Humdinger : DOOZY
A humdinger, or a oner, is someone or something outstanding. Humdinger is American slang dating back to the early 1900s, originally used to describe a particularly attractive woman.

A “doozy” is something extraordinary or bizarre. The word’s exact origins aren’t clear, but it might be a derivative of the name Eleanora Duse, and Italian actress popular early in the 20th century.

41. Programming language that’s also the name of an island : JAVA
Java is a large island in Indonesia, and home to the country’s capital, Jakarta. With a population of over 130 million, Java is the most populous island in the world, with even more people than Honshu, the main island of Japan.

Java is a programming language developed by Sun Microsystems. It was originally designed for interactive television, but didn’t fit the needs at the time. Back then it was called Oak, named after an oak tree that stood outside the designer’s office. Later it was called Green, and finally named Java, which was simply picked out of a list of random words.

42. Main food-supplying region of a country : BREADBASKET
The breadbasket of a country is the internal region which supplies most of its food. In Southeast Asia the equivalent term is the “rice bowl”.

48. Golf club similar to a niblick : LOFTER
A lofter is a golf club with a lofted face, used to get the ball high in the air. A 9-iron made be called a lofter.

54. Harvard Sq. on Boston’s T, e.g. : STA
The Massachusetts Bay Transportation Authority is called the MBTA, or more usually “the T”. It’s called “the T” because the company’s logo is the letter T in a circle.

67. Google executive Schmidt : ERIC
I used to visit Google a lot when I was in the industry. It is an amazing place, but the culture wouldn’t suit an old fogey like me. It is a great company that produces wonderful products though. Eric Schmidt was brought in as CEO in 2001 as the “grown up” needed by Google’s young co-founders Larry Page and Sergey Brin. Not too long ago Google announced that Page and Brin are “all grown up” now, and so Schmidt stepped down as CEO in April 2011, with Page taking over the the reins. Schmidt is now Executive Chairman of the company.

68. Leave at the altar : JILT
To “jilt” someone with whom you have a relationship is to drop them suddenly or callously. “Jilt” is an obsolete noun that used to mean “harlot” or “loose woman”.

71. Site of the Ibsen Museum : OSLO
Henrik Ibsen was a Norwegian playwright, considered by many to be the greatest playwright since William Shakespeare. He was famous for shocking his audiences by exploring subjects that offended the sensibilities of the day (the late 1800s).

1. Atlanta cager : HAWK
The NBA’s Atlanta Hawks started out as the Buffalo Bisons in 1946, although after only a few months the team was moved to Moline, Illinois as the Tri-Cities Blackhawks, one of the 17 original teams playing at the founding of the National Basketball Association. There was another move in 1951 and a renaming to the Milwaukee Hawks, and yet again in 1955 when the team became the St. Louis Hawks. The latest move was to Atlanta, in 1968.

2. The yoke’s on them : OXEN
A yoke is that wooden beam used between a pair of oxen so that they are forced to work together.

3. Land with chinchillas : PERU
A chinchilla is a rodent found in the Andes in South America. It is a little larger than a squirrel, and has velvet-like fur. It takes its name from the local Chinicha people who made clothing out of the chinchilla’s fur. Chinchillas are quite rare in the wild now as they been hunted almost out of existence, but there are plenty of farm-raised chinchillas around supporting the fur industry, I’m sad to report …

6. Playwright William : INGE
Playwright William Inge had a run of success on Broadway in the early fifties. His most celebrated work of that time was the play “Picnic”, for which he was awarded a Pulitzer Prize. The original 1953 cast of “Picnic” included a young male actor making his debut on Broadway, by the name of Paul Newman.

7. Rights org. : ACLU
The American Civil Liberties Union (ACLU) has its roots in the First World War, when it was founded to provide legal advice and support to conscientious objectors.

9. Dr. Watson player in 2009’s “Sherlock Holmes” : JUDE LAW
Jude Law is a wonderful English actor, and a big name in Hollywood these days. He makes a great romantic lead, witness his performance in “The Holiday” released in 2006, in which he starred opposite Cameron Diaz. He and Diaz were nominated by MTV for the best onscreen kiss that year!

10. Dumpster emanation : ODOR
“Dumpster” is one of those words that we use generically that is actually a brand name. The original “Dumpster” was patented by the Dempster Brothers of Knoxville, Tennessee (hence the name, from “dump” and “Dempster”).

12. Pince-___ : NEZ
Pince-nez are eyeglasses clipped to the bridge of the nose. The name is French, literally “pinch the nose”.

21. Canterbury’s county : KENT
Canterbury is a city in the southeast of England in the county of Kent. The city is famous for its cathedral, where Thomas Becket was murdered in 1170 making it a pilgrimage destination for Christians. It was one of these pilgrimages that was the inspiration for Geoffrey Chaucer’s “The Canterbury Tales” written in the 14th century.

26. On a scale of 1 to 10, what one amp in “This Is Spinal Tap” goes to : ELEVEN
“This Is Spın̈al Tap” is a rock musical mockumentary about the fictional band Spinal Tap, directed by the great Rob Reiner. I love Rob Reiner’s work, but this movie … not so much …

27. Storied duelist with a large nose : CYRANO
Cyrano de Bergerac was a French dramatist who lived in the 17th century. Paintings and drawings show that he had a large nose, although the size was exaggerated by those that wrote about his life. Reputedly Cyrano fought in over 1000 duels, mostly instigated by someone insulting him about his nose.

29. Tilling tool : HARROW
A harrow is a farm implement with multiple prongs (tines) that level off the surface of a plowed field as it is dragged across the ground.

30. Political activist James known for undercover videos : O’KEEFE
James O’Keefe is a conservative activist famous for what he calls his “guerrilla theater”, hidden camera video recordings he makes in controversial situations. His first really famous “shoot” was at a Planned Parenthood clinic in 2006 where he found workers willing to falsify records for minors to allow them to get abortions. The in 2009 he took videos he claimed showed ACORN employees giving advice to a purported prostitute about how to avoid income taxes.

31. Title TV character in a brown, skirted, leather outfit : XENA
Lucy Lawless is a New Zealand actress (and singer), famous for playing the title role in TV’s “Xena: Warrior Princess”. Lawless first played the Xena character in a made-for-TV movie called “Hercules and the Amazon Women”, and later reprised the role in a series called “Hercules: The Legendary Journeys”. Xena became so popular that a series was built around her character, with Lawless retained for the role.

32. Aster relative : TANSY
The tansy is a flowering plant of the aster family, native to Europe and Asia. It is found in other parts of the world, but there it is often considered to be invasive.

37. Hockey feint : DEKE
A deke, also known as a dangle, is a technique used to get past an opponent. “Deke” is a colloquial shortening of the word “decoy”.

44. Hill near a loch : BRAE
“Brae” is a lowland Scots word for the slope or brow of a hill.

50. Indian making a blanket : NAVAJO
Navajo rugs and blankets are produced by the Navajo people living in the Four Corners area of the southwest. Originally the blankets were of course utilitarian, but now they are mainly purchased for decoration. These days blanket and rug production is a significant element of the Navajo economy.

53. Bad feeling in one’s gut? : ULCER
A peptic ulcer, until fairly recently, was believed to be caused by undue amounts of stress in one’s life. It is now known that 70-90% of all peptic ulcers are in fact associated with a particular bacterium.

55. Sch. system with campuses in Albany and 63 other places : SUNY
The State University of New York is the largest system of third level colleges and universities in the world, with almost 500,00 students attending over 60 campuses across the state.

58. Eye part : IRIS
The iris is the colored part of the eye that has an aperture in the center that can open or close depending on the level of light hitting the eye.

Cancún is a city on the east coast of Mexico, on the other side of the Yucatan Channel from Cuba. Cancún is growing rapidly due to its booming tourist business. It is the center of what’s often called “The Mexican Caribbean” or the “Mayan Riviera”.

62. Little ___, who did the Loco-Motion : EVA
Carole King, and her long-time partner Gerry Goffin, have been writing hit songs since the early sixties, and not just those performed by Carole King herself. Carole and Gerry had a babysitter, one Eva Narcissus Boyd, who was always bopping around the house in an unusual dance style, so they wrote a song about her dance and they called it “The Loco-Motion”. Then, they gave it to the babysitter to record. Ms. Boyd chose as a stage name a character in “Uncle Tom’s Cabin”, Little Eva …