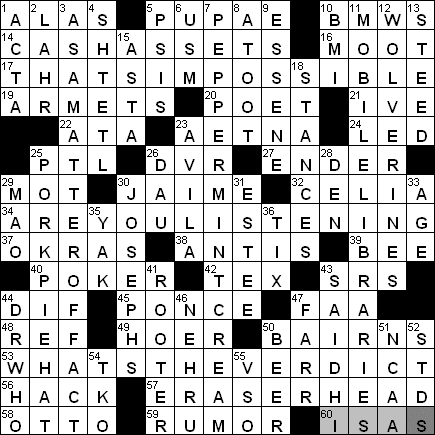 
Today’s Wiki-est, Amazonian Googlies
Across
5. Slave-making ants steal them : PUPAE
The Amazon ant is a remarkable creature. It has evolved to the extent that it can no longer care for its young or even provide for itself directly. What it can do is raid the nests of other ant species, stealing pupae and bringing them back to its own nest. When the pupae develop into maturity, the “enslaved” ants take care of the young Amazon ants and provide food for the whole colony.

10. 507s of the ’50s, e.g. : BMWS
The BMW 507 was a lovely-looking roadster produced in Germany in the late fifties and intended for the US market. It was rejected by the American consumer though as it was so expensive, and only 252 of the model 507 were ever made.

19. Headgear for medieval soldiers : ARMETS
The armet is a relatively lightweight helmet used in the 15th century. It was considered innovative in that it was the first helmet design to completely enclose the head, hence providing added protection.

23. Coverage provider named after a smoker : AETNA
When Aetna was founded, the name was chosen to evoke images of Mt. Etna, the European volcano.

“The PTL Club” was a daily television show hosted by TV evangelists Jim and Tammy Faye Bakker. PTL was short for both “Praise the Lord” and “People that Love”. The show ended its run of over ten years in 1987 when Jim Bakker’s involvement in financial and sexual scandals was revealed. Bakker served 5 years in jail, part of an 18-year sentence.

26. TiVo or ReplayTV : DVR
TiVo was introduced in 1999, the world’s first commercially successful DVR (Digital Video Recorder). If you don’t have a DVR, you might want to consider getting one. If you enjoytelevision, it’s very liberating.

30. The Bionic Woman’s first name : JAIME
I so much preferred “The Bionic Woman” than the original show, “The Six Million Dollar Man”, but that was probably because I was “at that age” in the mid-seventies when the star Lindsay Wagner was attracting my attention! Wagner played Jaime Sommers who was badly injured in a parachute jump, and so was treated by the implanting of robotic devices that gave her speed, strength and exceptional hearing.

32. Ben Jonson title woman : CELIA
Ben Jonson’s poem “To Celia” was written in 1616, but some time around 1770 the words were put to music in a song which uses the first line as its title, “Drink to Me Only with Thine Eyes”.

44. Distinction, briefly : DIF
How would you distinguish them? What’s the difference (“dif”)?

45. Puerto Rico’s Museum City : PONCE
The city of Ponce in Puerto Rico earned the nickname “Museum City” because it has many quality museums.

47. Org. concerned with the correct approach : FAA
The Federal Aviation Administration was set up in 1958 (as the Federal Aviation Agency). The agency was established at that particular time largely in response to an increasing number of midair collisions. The worst of these disasters had taken place two years earlier over the Grand Canyon, a crash between two commercial passenger airplanes that resulted in 128 fatalities.

If you’re a Scotch drinker, you might know that the famed Johnnie Walker brand of whisky comes from Kilmarnock in Ayrshire, Scotland. But, I am sure all readers of this blog would eschew Scotch whisky in favor of Irish whiskey!

56. Stomach : HACK
“Hack” is a slang term meaning to cope, to manage. To stomach? Well, I suppose in a broad sense …

57. 1977 cult film with the tagline “Where your nightmares end …” : ERASERHEAD
Director David Lynch started work on “Eraserhead” early in his career, and it is very much “his” film as he wrote, produced and directed it. It took him a while to get it finished as funding was hard to come by. He used funds from an American Film Institute grant, as well as financing from family and friends, including actress Sissy Spacek.

58. Anne Frank’s father : OTTO
Anne Frank has to be one of the most famous victims of the Holocaust, largely because the story of this young girl lives on in her widely published diary, and in adaptations of the diary for stage and screen. Anne Frank was a German national, until she lost her nationality in 1941 when the Nazis came to power. By this time, she was living with her family in Amsterdam, as the Franks chose to flee Germany in 1933. When the Germans occupied the Netherlands, the family went into hiding in the attic of Otto Frank’s office building (Otto was Anne’s father). There the family hid for two whole years, until they were betrayed. The family was split up, and Anne and her sister died in a concentration camp in 1945 from typhus.

Down
1. Exitus ___ probat (the end justifies the means) : ACTA
The literal translation of the Latin phrase “exitus acta probat” is “the result validates the deed”, but it is more commonly written as “the ends justify the means”.

2. Player of a big yellow cat : LAHR
Bert Lahr’s most famous role was that of the cowardly lion in “The Wizard of Oz”. Lahr had a long career in burlesque, vaudeville and on Broadway. Remember the catchphrase made famous by the cartoon character Snagglepuss, “Heavens to Murgatroyd!”? Snagglepuss stole that line from a 1944 movie called, “Meet the People” in which it was first uttered by Bert Lahr.

4. Where Yiddish was once spoken : SHTETL
The Yiddish word for “town” is “shtot”, and so “shtetl” is the diminutive form meaning “small town”.

5. Fraternity characters : PSIS
The Greek letter psi is the one that looks a bit like a trident.

9. Certain Judean : ESSENE
The Essenes were a Jewish religious group, most noted these days perhaps as the writers of the Dead Sea Scrolls.

12. 51-Down hoops champs of 1989 : WOLVERINES
The Wolverines are the sports teams of the University of Michigan.

13. Part of Paul Revere’s Boston statue : STEED
The statue of Paul Revere in North End, Boston of course features the great American patriot astride his horse. The statue was erected in 1940, and was created by sculptor (and Olympic archer!) Cyris Edwin Dallin.

15. 1930s film star with notable facial hair : ASTA
Asta was the wonderful little dog in the superb movie “The Thin Man” starring William Powell and Myrna Loy. In the original story by Dashiell Hammett, Asta was a female Schnauzer, but on screen Asta was played by a wire-haired fox terrier called “Skippy”. Skippy was also the dog in “Bringing up Baby” with Cary Grant and Katherine Hepburn, the one who kept stealing the dinosaur bone. Skippy retired in 1939, so Asta was played by other dogs in the remainder of “The Thin Man” films.

23. 1954 A.L. batting champ Bobby : AVILA
Major League Baseball player Booby Ávila was a native of Veracruz, Mexico. He won the 1954 American League batting championship, even though he played most of the season with a broken thumb.

25. Buster Keaton trademark : PORK PIE HAT
The pork pie hat originated in the mid-1800s. It is round, usually made of felt, and has a flat top. When first introduced it was a woman’s hat, but then men grabbed hold of it …

29. He married He : MAO
Mao Zedung had ten children, born to four different wives. His third wife was He Zizhen, to whom he was married from 1928 to 1939. The couple had six children together.

31. Name on Intuition perfume boxes : ESTEE
Estée Lauder was quite the successful business woman, with a personal reputation as a great sales person. She introduced her own line of fragrances starting in 1953, a bath oil called “Youth Dew”. “Youth Dew” was marketed as a perfume, but it was added to bath water. All of a sudden women were pouring whole bottles of Ms. Lauder’s “perfume” into their baths, while using only a drop or two of French perfumes behind their ears. That’s quite a difference in sales volume …

33. Match.com datum : AGE
We’ve all seen the Match.com ads on the television, I’d guess. The company was started in 1993 and claims to have over 20 million members worldwide, in the ratio of male to female of 49:51.

44. “Torchwood” was spun off from it : DR WHO
The iconic science-fiction television show “Doctor Who” was first aired in 1963, and relaunched in 2005 by the BBC. The relaunched series is produced in-house by the BBC in Cardiff in Wales, and this is the setting of the successful “Doctor Who” spin-off, “Torchwood”. The new show is about the Cardiff branch of the Torchwood Institute which investigates incidents involving extraterrestrials.

46. Chief Indian, once : NEHRU
Jawaharlal Nehru was the very first prime minister of India, serving from 1947-64. Nehru was basically the heir to his mentor, Mahatma Gandhi. Nehru’s only daughter, Indira, also became prime minister (known as Indira Gandhi, she was no relation to Mahatma).

47. “The Red Skelton Show” regular : FARR
Actor Jamie Farr is best known for playing the cross-dressing Max Klinger in the sitcom ”M*A*S*H”. Although Farr landed a role in the 1955 movie “Blackboard Jungle”, his career didn’t really take off until he started appearing regularly on “The Red Skelton Show”. Years later he managed to get a one-episode appearance in ”M*A*S*H”, and his character and performance was received so well that he became a regular on the show.

50. Lone Star, e.g. : BEER
The Lone Star Brewery was built in Texas in 1884, a project funded by Adolphus Busch of Anheiser-Busch fame. The Lone Star brand beer is made by Pabst now, and the original San Antonio brewery houses the city’s Museum of Art.

54. Decision letters : TKO
In boxing, a knockout (KO) is when one of the fighters can’t get up from the canvas within a specified time, usually 10 seconds. This can be due to fatigue, injury, or the participant may be truly “knocked out”. A referee, fighter, or doctor may also decide to stop a fight without a physical knockout, especially if there is concern about a fighter’s safety. In this case, the bout is said to end with a technical knockout (TKO).

55. Brandy letters : VSO
Cognac is the most famous type of brandy made, named after the town of Cognac in the very west of France. To be called cognac, the brandy must be distilled twice in copper pot stills, and aged at least two years in very specific French oak barrels. It is the length of this aging that defines the various grades of cognac (and other brandies):