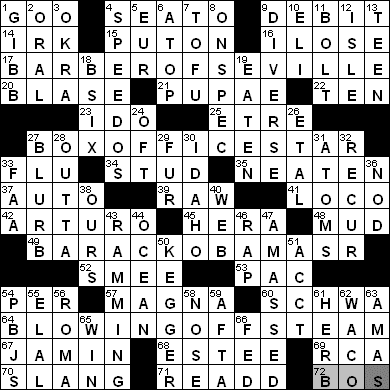 CROSSWORD SETTER: Joon Pahk
THEME: BOS … all of the theme answers are three words. starting with the letters B, O and S:


Today’s Wiki-est, Amazonian Googlies
Across
4. “From ___ shining …” (“America the Beautiful” lyric) : SEA TO
When she was 33 years old, Katharine Lee Bates took a train ride from Massachusetts to Colorado Springs. She was so inspired by many of the beautiful sights she saw on her journey that she wrote a poem she called “Pikes Peak”. Upon publication the poem became quite a hit, and several musical works were adapted to the  words of the poem, the most popular being a hymn tune composed by Samuel Ward. Bates’s poem and Ward’s tune were published together for the first time in 1910, and given the title “America the Beautiful”.

17. Rossini opera about Figaro, with “The” : BARBER OF SEVILLE
Rossini’s opera “The Barber of Seville” was first performed in 1816 in Rome. It was one of the first Italian operas to be performed in this country, premiering at the Park Theater in New York City in 1825.

21. Not-quite-mature insects : PUPAE
The pupa is an intermediate stage in the development of an insect. All four stages are embryo, larva, pupa and imago.

34. Alternative to draw or hold ’em : STUD
Stud poker is the name given to many variants of the game, all characterized by the dealer giving each player a mix of cards face-down and face-up. The cards facing downwards are called “hole cards”, cards only visible to the individual who holds that particular hand. That gives rise to the phrase “ace in the hole”, a valuable holding that only the player with the ace is aware of.

42. Conductor Toscanini : ARTURO
Arturo Toscanini was an Italian conductor of classical music. Toscanini took up the baton for the first time under sensational circumstances in 1886. He was attending a performance of “Aida” in Rio de Janeiro as the assistant chorus master, on a night when a substitute conductor was leading the orchestra. The substitute was in charge because the lead conductor had been forced to step down by striking performers who would not work with him. The disgruntled lead conductor led the audience in booing the unfortunate substitute, forcing him off the stage. Yet another substitute attempted to lead the performance, but he could not overcome the hostility of the crowd. The musicians themselves begged Toscanini to take up the baton, for the first time in his life, simply because he knew the score by heart. After over an hour of mayhem, Toscanini led the company in a remarkable performance to marvelous acclaim. He had just launched his conducting career.

45. Queen of Olympus : HERA
In Greek mythology, Hera was the wife of Zeus and was noted for her jealousy and vengeful nature, particularly against those who vied for the affections of her husband. The equivalent character in Roman mythology was Juno.

49. The father in “Dreams From My Father” : BARACK OBAMA SR
Barack Obama, Sr. was first married at the age of 18 in his home country of Kenya, and had two children during that marriage. He left his wife and children back in Kenya when he enrolled in the University of Hawaii in 1959, as the school’s first African foreign student. There Obama met Ann Dunham in a Russian language course. The two entered into a romantic relationship and Durham became pregnant. Obama told Durham that he was divorced from his first wife (not true), and the pair were married on Maui in 1961. Six months later Barack Obama II was born, destined to be come the 44th President of the United States. Soon after the birth of their child, Ann Durham moved with their son to Seattle, Washington. The couple were divorced in 1964.

52. Hook’s henchman : SMEE
In J. M. Barrie’s play and novel about Peter Pan, Smee is one of Captain Hook’s pirates and his right-hand man. He is described by Barrie as being “Irish” and “a man who stabbed without offence”. Nice guy!

57. ___ Carta : MAGNA
The Magna Carta is a landmark document issued in England in 1215. It represents the first time that an English king had to submit to the will of his subjects, a group of barons who sought to limit the powers of the monarchy. In particular the Magna Carta calls out that no freeman could be punished except through the law of the land. And of course, the Magna Carta was an inspiration for the United States Constitution.

60. Unstressed vowel symbol : SCHWA
A “schwa” is an unstressed and toneless vowel found in a number of languages including English. Examples from our language are the “a” in “about”, the “e” in “taken”, and the “i” in pencil.

68. ___ Lauder cosmetics : ESTEE
Estée Lauder was quite the successful business woman, with a reputation as a great sales person. She introduced her own line of fragrances starting in 1953, a bath oil called “Youth Dew”. “Youth Dew” was marketed as a perfume, but it was added to bath water. All of a sudden women were pouring whole bottles of Ms. Lauder’s “perfume” into their baths, while using only a drop or two of French perfumes behind their ears. That’s quite a difference in sales volume …

72. Logan Airport luggage letters … and a hint to 17-, 27-, 49- and 64-Across : BOS
Boston’s Logan Airport is named after General Edward Lawrence Logan, a military officer from South Boston who fought in the Spanish-American War.

Down
1. Any of the Bee Gees brothers : GIBB
The Brothers Gibb (hence, the Bee Gees) were born in England, but grew up and started their musical careers in Australia. They moved back to Manchester in the north of England, and then hit the big time.

4. Sleek swimsuits : SPEEDOS
Speedo brand swim-wear was first produced in Australia in 1928, by a hosiery company that wanted to diversify. The brand name was chosen after a slogan competition among employees was won by “Speed on in your Speedos”. It was a long time ago, I guess …

7. Vegan protein option : TOFU
Tofu is another name for bean curd, and is a Japanese word meaning just that … bean that has “curdled”. It is produced by coagulating soy milk, using either salt or something acidic. Once the protein has coagulated, the curds are pressed into the familiar blocks. Personally, I love tofu, but my wife, she hates it …

11. Aptly named sprinter Usain : BOLT
Usain Bolt is a Jamaican sprinter who in the 2008 Olympics won three sprint gold medals. Back in Jamaica Bolt was big into cricket, and probably would have been a very successful fast bowler had he not hit the track instead.

12. ___ of Wight : ISLE
The Isle of Wight is the largest island in England, and lies about five miles off the south coast.

24. Frequently, to Frost : OFT
When I was a school-kid back in Ireland, Robert Frost’s “Stopping by Woods on a Snowy Evening” was our first introduction to American poetry, and what a lovely introduction it was …

26. “And others,” in a bibliography : ET AL
Et alii is the equivalent of et cetera, with et cetera being used in place of a list of objects, and et alii used for a list of names.

30. Boise’s state : IDAHO
Boise, Idaho is the largest metropolitan area in the state by far. Boise is home to many famous residents, including the actor, George Kennedy.

33. Flight watchdog agcy. : FAA
The Federal Aviation Administration was set up in 1958 (as the Federal Aviation Agency). The agency was established at that particular time largely in response to an increasing number of midair collisions. The worst of these disasters had taken place two years earlier over the Grand Canyon, a crash between two commercial passenger airplanes that resulted in 128 fatalities.

46. Emulate Eminem : RAP
Eminem’s real name is Marshall Mathers, a native of Saint Joseph, Missouri. He grew up poor, raised by a single-mom as the family was abandoned by his father when he was 18 months old. Marshall and his mother moved around the country before settling in a suburb of Detroit. He didn’t do well at school, and dropped out at the age of 17. But, in the end, he made it very big …

55. Israeli carrier : EL AL
El Al (Hebrew for “to the skies”) does not fly on the Sabbath, although this has been subject of some controversy at times since the airline was founded in 1948.

66. U.S. central bank system, with “the” : FED
The Federal Reserve System is more usually known simply as “the Fed”, and is the central banking system of the US. It was introduced in 1913 in response to a number of financial panics at the beginning of the 20th century. The original role for the Fed was to act as a lender of last resort, in case there was a run on a bank. This can happen as most of the money that is deposited by customers in a bank is reinvested by that bank, so it has very little liquid cash available. If too many customers look for their money at one time, then the bank can be short of cash and this can start a “run”. The Fed’s responsibilities have broadened since those early days.