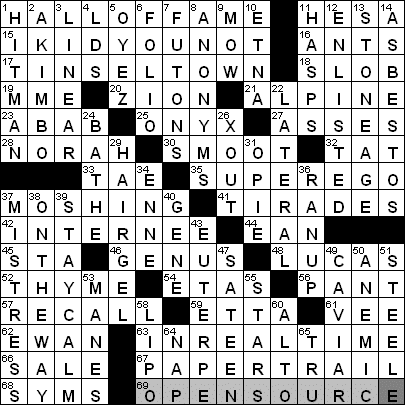 11. The Bee Gees’ “___ Liar” : HE’S A
The Brothers Gibb (hence the name: Bee Gees) are noted for their roots in Manchester in England, although they were actually born and lived the first years of their lives on the Isle of Man. Their parents returned with their children to their hometown of Manchester in the early 1950s, living there until 1958 when the whole clan moved again, this time to Queensland, Australia. It was in Australia that the boys first found fame, and adopted the name the Bee Gees. After some initial success, the brothers decided to go back to England in 1966. Soon they were churning out hits like “Massachusetts”, “To Love Somebody” and “I’ve Gotta Get a Message to You”. But the brothers got into a rut in the early 70s, and record sales slumped. They relocated yet again, to Miami, Florida, where they were approached to write and record songs for the soundtrack of a new movie, that had already finished filming, called “Saturday Night Fever”. The brothers wrote the whole soundtrack basically in one weekend (in Paris, for tax reasons), and the rest is history.

20. The Promised Land : ZION
The name “Zion” first turns up in the Book of Solomon in the Bible. Zion is commonly used to refer to Jerusalem, and sometimes the Biblical land of Israel.

21. Like slaloms : ALPINE
Slalom is an anglicized version of the Norwegian word “slalam”, meaning “skiing race”.

25. Black : ONYX
Onyx is a form of quartz that comes in many different shades, but most often it’s the black version that’s used for jewelry. The name “onyx” comes from the Greek word for “fingernail”, as onyx in the flesh color is said to resemble a fingernail.

28. Jazzy Jones : NORAH
The beguiling Norah Jones, the daughter of famous sitar virtuoso Ravi Shankar, is one of my favorite singers. If you haven’t heard her sing “Come Away with Me”, you just haven’t lived …

30. 1930 tariff act co-sponsor : SMOOT
The Smoot-Hawley Tariff Act of 1930 was sponsored by Senator Reed Smoot and Representative Willis C. Hawley. The act raised tariffs on imported goods to record levels, the second highest in US history. The strategy appeared to work at first, protecting US jobs in the early days of the depression. But as many anticipated, tariffs were raised in retaliation by other countries and US exports plummeted. Many economists blame the 1930 Tariff Act for the depth of the Great Depression.

32. Bit of ink : TAT
The word “tattoo” was first used in English in the writings of Captain Cook. In his descriptions of the indelible marks adorning skin of Polynesian natives, he anglicized the Tahitian word “tatau” into “tattoo”.

33. Man doing light work?: Abbr. : TAE
Thomas Alva Edison was nicknamed “The Wizard of Menlo Park” by a newspaper reporter, a name that stuck with him. He was indeed a wizard, in the sense that he was such a prolific inventor. The Menlo Park part of the moniker recognized the location of his first research lab, in Menlo Park, New Jersey.

35. Id checker : SUPER-EGO
Sigmund Freud created a structural model of the human psyche, breaking it into three parts: the id, the ego, and the super-ego. The id is that part of the psyche containing the basic, instinctual drives. The ego seeks to please the id by causing realistic behavior that benefits the individual. The super-ego has almost a parental role, contradicting the id by introducing critical thinking and morals to behavioral choices.

37. Violent concert activity : MOSHING
Moshing is the pushing and shoving that takes place in the audience at a concert (usually punk or heavy metal). The area directly in front of the stage is known as the mosh pit. When a performer does a “stage dive” it is into (or I suppose “onto”) the mosh pit. It doesn’t sound like fun to me. Injuries are common in the mosh pit, and deaths are not unknown.

42. John McCain, e.g., for over five years : INTERNEE
John McCain went into the US Naval Academy in 1958, following a family tradition as his father and grandfather were both four-star admirals. The younger McCain did not achieve the same rank, retiring from the Navy as a captain in 1981, but his career development was interrupted by almost six years spent as a prisoner of war in North Vietnam.

44. Caesar’s following? : -EAN
The story that Julius Caesar was born via a Caesarean section seems be unfounded. Although such procedures were indeed carried out in Ancient Rome there are no reports of the mother surviving (and Julius Caesar’s mother did raise her child).

48. “THX 1138” director, 1971 : LUCAS
“THX 1138” is a 1971 movie directed by George Lucas, his first feature-length film. THX 1138 is the name of the movie’s hero, played by Robert Duvall. THX 1138 is a factory worker living in the future, in a world in which the society is controlled by administering drugs that suppress emotions and sexual desire.

59. Jazzy Jones : ETTA
Etta Jones was a jazz singer, sometimes known as the “jazz musician’s jazz singer”. Because she has a similar name to Etta James, Jones was often confused with the more popular singer. Jones never really had any huge commercial success though, despite the respect that she engendered within the inner sanctums of the jazz world.

62. Singer/songwriter MacColl : EWAN
The English singer and songwriter Ewan MacColl is the father of singer Kirsty MacColl. Kirsty died in a diving accident in Cozumel, Mexico (I’ve been diving there!!).

69. Like some software : OPEN SOURCE
Open-source software has the source code available to users and is not protected by copyright. The intent is to allow collaboration in the development of the software in the hope of producing a better product. One of the more famous examples of an open-source product is the Mozilla Firefox Internet browser that some of you may be using to read this blog.

2. Like Superman’s arms, often : AKIMBO
We’re all familiar with the expression “arms akimbo”. Akimbo is such a lovely word, I think, so just I had to look up its etymology. The research failed to dig up anything too exciting though. It seems to stem from Middle English, “in kekbowe” or “on kenbow” meaning “bend in a curve”.

4. Its HQ are in Temple Square : LDS
The Church of Jesus Christ of Latter-day Saints, often abbreviated to the LDS Church, is known colloquially as the Mormon Church. When Mormon pioneers arrived in the Salt Lake Valley in 1847, a plot of land on the valley floor was selected by the Church president, Brigham Young, as the place on which a temple should be built. That spot now covers ten square blocks in Salt Lake City, and is known as Temple Square.

5. Bringer of order in the court : OYEZ
“Oyez” is an Anglo-French word traditionally called out three times, meaning “hear ye!”

7. Versatile furniture : FUTONS
Those of you that have visited Japan are maybe familiar with the traditional Japanese futon. Unlike what we tend to call futon in this country, the Japanese original is a padded mattress and quilt which is rolled up in the morning, often so that the space used for sleeping can be repurposed during the day.

8. Unidentified people : ANONYMS
An anonym is an anonymous person.

10. Blower of giant smoke rings : ETNA
Mt. Etna is the largest of three active volcanoes in Italy, about 2 1/2 times the height of its equally famous sister, Mt Vesuvius.

13. Much simpler time : STONE AGE
Ancient societies can be classified by the “three-age system”, which depends on the prevalence of materials used to make tools. The three ages are:

31. Bee’s charge : OPIE
Aunt Bee was a character in “The Andy Griffith Show”. The character’s full name was Beatrice Taylor but everyone in Mayberry called her “Aunt Bee”. In the storyline she was the aunt of the protagonist, Sheriff Andy Taylor. Aunt Bee was played by actress Frances Beaver.

Ron Howard sure has come a long way since playing Opie on “The Andy Griffith Show”. He has directed some fabulous movies, including favorites of mine like “Apollo 13”, “A Beautiful Mind” and “The Da Vinci Code”. And today, Opie is a grandfather …

40. Family hand-me-down? : GENE
A gene is a section of a chromosome that is responsible for a particular characteristic in an organism. For example, one gene may determine eye color. We have two copies of each gene, one copy from each of our parents, with each one known as an allele.

43. Sister of Clio : EUTERPE
In Greek mythology, the muses are the goddesses who inspire the creation of literature and the arts. The number of muses is a subject of debate at times, but the most popular view is that there are nine:

47. Sheet material : SATEEN
Sateen is a cotton fabric, with a weave that is “four over, one under” meaning that most of the threads come to the surface giving it a softer feel.

53. They flow along bays : MANES
“Bay” is a term usually applied to horse. It describes a reddish-brown animal, especially one with a black mane and tail.

58. Way to slim down, for short : LIPO
Liposuction dates back to the 1920s, developed by a surgeon in France. However, the procedure quickly lost favor when a French model developed gangrene after surgery. As a result it wasn’t until the mid-seventies that modern liposuction gained favor, after being popularized by two Italian-American surgeons in Rome.

65. 1989 one-man show : TRU
“Tru” was written by Jay Presson Allen, a play about Truman Capote that premiered in 1989. There is an interesting anachronism in the piece. It is set in Capote’s New York City apartment in Christmas 1975, and at one point the Capote character talks about suicide, saying he has enough pills to stage his own Jonestown Massacre. The Jonestown Massacre didn’t happen until three years later, in 1978.