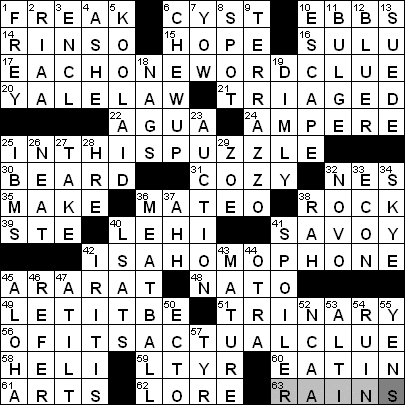 14. Classic detergent brand : RINSO
Rinso was a laundry detergent first manufactured in England in 1908 by a company called Hudson’s Soap. It was introduced into the US in 1918. In America Rinso took to radio advertising and sponsorship in the days of “soap operas”. Their most famous program association was with “The Amos ‘n’ Andy Show” in the forties. One of the brand’s slogans was “Solium, the sunlight ingredient”. I have no idea what Solium is, but it certainly did sell a lot of soap!

15. It stayed in Pandora’s box : HOPE
In Greek mythology, Pandora was the first woman. Pandora is famous for the story of “Pandora’s Box”. In actual fact, the story should be about Pandora’s “Jar”, as a 16th-century error in translation created a “box” out of the “jar”.

In the story of Pandora’s Box, curiosity got the better of her and she opened up a box she was meant to leave alone. As a result she released all the evils of mankind, just closing it in time to trap hope inside.

16. Shipmate of Spock : SULU
Mr Sulu was of course played by George Takei in the original “Star Trek” series. Takei has played lots of roles over the years, and is still very active in television. Did you know that he appeared in the 1963 film, “Pt-109”? He played the helmsman steering the Japanese destroyer that ran down John F. Kennedy’s motor torpedo boat.

20. Alma mater of Gerald Ford : YALE LAW
President Gerald Ford was well known for his athletic prowess. He was the star football player both in his high school and later at the University of Michigan. After graduation, President Ford received two offers to play in the NFL, from the Detroit Lions and the Green Bay Packers. He turned down both teams opting instead to take a coaching position at Yale giving him the opportunity to apply to Yale Law School. But young Mr. Ford’s plan backfired as Yale Law School turned him down because of his full-time commitment to sports, coaching football, boxing and teaching JV cheer-leading. It took three years for President Ford to make it into Yale Law School, but he finally got there, in 1938.

21. Prioritized in the emergency room : TRIAGED
“Triage” is the process of prioritizing patients for treatment, especially on a battlefield. The term “triage” is French and means “a sorting”.

24. Subject of current thinking? : AMPERE
The unit of electric current is the ampere, abbreviated correctly to “A” rather than “amp”. It is named after French physicist André-Marie Ampère, one of the main scientists responsible for the discovery of electromagnetism.

36. San ___, Calif. : MATEO
San Mateo is located south of San Francisco, just across the other side of the Bay from where I live. San Mateo is Spanish for Saint Matthew.

40. Where Samson slew the Philistines : LEHI
In the story of Samson in the Bible, Samson is tied up with ropes and taken to Lehi where he breaks free of his bonds and uses the jawbones of an ass to slay one thousand Philistines. The full name for Lehi is Ramath Lehi which translates as “jawbone hill”.

41. Popular 1920s-’50s Harlem ballroom, with “the” : SAVOY
The Savoy Ballroom was a very popular dance spot in Harlem in New York city from the twenties to the fifties. In the days of “whites only” entertainment venues (like the “Cotton Club”), the Savoy was integrated, with white and black Americans dancing together.

45. Dormant volcano near the Iranian border : ARARAT
Mount Ararat is in Turkey. Ararat is a snow-capped dormant volcano, with two peaks. The higher of the two, Greater Ararat, is the tallest peak in the country. Ararat takes its name from a legendary Armenian hero called Ara the Beautiful (or Ara the Handsome).

48. Cold war force : NATO
NATO is the North Atlantic Treaty Organization (or OTAN in French, l’Oganisation du Traite de l’Atlantique Nord). NATO was founded not long after WWII in 1949, and is headquartered in Brussels, Belgium. The first NATO Secretary General was Lord Ismay, Winston Churchill’s chief military assistant during WWII. Famously he said the goal of NATO was “to keep the Russians out, the Americans in, and the Germans down.”

49. #1 Beatles tune of 1970 : LET IT BE
“Let It Be” was the last song that the Beatles released as an active group playing together. The song was written by Paul McCartney, and is clearly one of his own favorites. He says that he was inspired to write the song after having had a dream about his mother (who had died some years earlier from cancer). In fact he refers to her (Mary McCartney) in the line “Mother Mary comes to me”. Paul’s second wife, Linda, is singing backing vocals on the song, the only time she is known to have done so in a Beatles recording. 18 years after that 1970 recording was made, Paul, George and Ringo sang “Let It Be” at a memorial service for Linda, who was also lost to cancer. Sad stuff, but a lovely song …

51. Having three parts : TRINARY
One more part than binary is … trinary.

59. Astronomical distance: Abbr. : LT YR
A light-year is the distance that light travels in just over 365 days (one Julian year). That is about 6 trillion miles.

1. “A Million Little Pieces” author James : FREY
“A Million Little Pieces” is a somewhat controversial memoir by James Frey. It tells the story of the young Frey overcoming alcohol and drug abuse. The controversy arose after when it was revealed after the book was published that what Frey wrote was “essentially” true, but a lot of details were changed. Later editions describe the memoir as “semi-fictional”.

4. Athlete who posthumously won the Presidential Medal of Freedom, 1993 : ASHE
Arthur Ashe was a professional tennis player from Richmond, Virginia. In his youth he found himself having to travel great distances to play against Caucasian opponents due to the segregation that still existed in his home state. He was rewarded for his dedication by being selected for the 1963 US Davis Cup team, the first African America player to be so honored. He continued to run into trouble because of his ethnicity though, and in 1968 was denied entry into South Africa to play in the South African Open. In 1979 Ashe suffered a heart attack and had bypass surgery, with follow-up surgery four years later during which he contracted HIV from blood transfusions. Ashe passed away in 1993, due to complications from AIDS. Shortly afterwards, Ashe was posthumously awarded the Presidential Medal of Freedom by President Bill Clinton.

5. Tang alternative : KOOL-AID
The drink we know today as Kool-Aid was invented by Edward Perkins and his wife, in Perkins’s mother’s kitchen in southwest Nebraska. Kool-Aid is now the Official Soft Drink of the state.

9. Mosaic flooring : TERRAZZO
Terrazzo is a flooring material made of small stone chips set hard in a binder.

13. Upholstery material : SUEDE
Suede is leather made from the underside of the skin, mainly from a lamb. As such it is very soft, although not as durable as leather made from the exterior skin. The soft leather was, and is still used for making gloves. Back in 1859 these gloves were called “gants de Suede” in France, or “gloves of Sweden”. So, “suede” is simply the French word for Sweden.

25. Deep Blue and others : IBMS
Deep Blue was a computer developed by IBM specifically for playing chess. In 1996 it became the first machine to win a chess game against a reigning world champion. The champion in question was the great Garry Kasparov, although he came out on top in the end by winning the 6-game competition 4-2.

28. Old Eur. realm : HRE
Pepin the Short was the Duke of the Franks from 751 to 768. He expanded the Frankish Empire, and then the law dictated that he had leave the Empire divided between his two sons, Carloman I and Charlemagne. Carloman I was given lands that were centered around Paris, and Charlemagne was given lands that completely surrounded his brothers territory. So it fell to Charlemagne to defend and extend the borders of the empire, and because of this it is Charlemagne that we read about today, not Carloman I. And it was Emperor Charlemagne who in effect founded the Holy Roman Empire.

29. Actress Saldana of “Avatar” : ZOE
American actress Zoe Saldana played the Na’vi princess in “Avatar”, and Uhura in the 2009 movie “Star Trek”. She seems to pick the right movies, as she is the only actress to have three different movies in the top twenty at the box office for three consecutive weeks (“Avatar”, “The Losers” and “Death at a Funeral”).

34. Hebrides isle : SKYE
The Isle of Skye is off the northwest coast of Scotland in the Inner Hebrides. It is the second largest island in the country, and has been linked to the mainland by a road bridge since 1995. I’ve never been there, but I hear the views are spectacular.

45. Greeting for Obama returning home? : ALOHA
Despite rumors to the contrary, I am pretty sure that Barack Hussein Obama II was indeed born in Hawaii. President Obama was born on August 4, 1961 at Kapi’olani Maternity & Gynecological Hospital in Honolulu, Hawaii.

52. March Madness inits. : NCAA
The National Collegiate Athletic Association dates back to the Presidency of Theodore Roosevelt. When President Roosevelt’s son broke his nose playing football at Harvard, Roosevelt turned his attention to the number of serious injuries and even deaths occurring in college sports. He instigated meetings between the major educational institutions, leading to the formation of the Intercollegiate Athletic Association of the United States in 1906 with the remit of regulating college sports. The IAUSS evolved into the NCAA in 1910.

53. Some choir members : ALTI
In choral music, alto is the second-highest voice in a four-part chorus: soprano, contr(alto), tenor, bass. The word “alto” describes the vocal range, that of the deepest, female singing-voice, whereas the term “contralto” describes more than just the alto range, but also its quality and timbre. An adult male’s voice (not a boy’s) with the same range as an alto is called a “countertenor”.

55. Big appetites : YENS
The word “yen”, meaning “urge”, has been around in English since the very early 1900s. It comes from the earlier word “yin” imported from Chinese, which was used in English to describe an intense craving for opium!