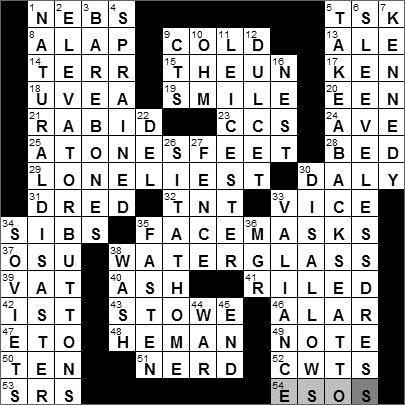 CROSSWORD SETTER: Joe Krozel
THEME: 1961 … the black squares in the grid form the digits 1961, and the puzzle is full of references to the Cold War, including a FENCE (from the Berlin Wall) dividing the East side of the puzzle from the West. The main theme answers are:

1. Beaks : NEBS
“Nib” is a Scottish variant of the Old English word “neb”, with both meaning the beak of a bird. This usage of “nib” as a beak dates back to the 14th century, with “nib” meaning the tip of a pin or quill coming a little later, in the early 1600s.

9. With 44-Down, conflict between 7-Down and the 34-Down : COLD
(44. See 9-Across : WAR)
The term “Cold War” was first used by the novelist George Orwell in a 1945 essay about the atomic bomb. He described a world under threat of nuclear war as having a “peace that is no peace”, in a permanent state of “cold war”. The specific use of “cold war” to describe the tension between the Eastern bloc and the Western allies is attributed to a 1947 speech by Bernard Baruch.

17. Thriller author Follett : KEN
Ken Follett is a Welsh author specializing in thrillers and historical novels. Among his most famous works are “Capricorn One”, “Eye of the Needle”, “The Man From St. Petersburg” and “On Wings of Eagles”. Quite a few of Follett’s novels have been adapted for the big screen, as you can perhaps tell from the preceding list of titles.

18. Place for an iris : UVEA
The uvea is the middle of the three layers that make up the eyeball.

The iris is the colored part of the eye that has an aperture in the center that can open or close depending on the level of light hitting the eye.

23. Solution amts. : CCS
That would be cubic centimeters.

30. Original “What’s My Line?” host John : DALY
I only discovered the wonderful old American TV show “What’s My Line” a few years ago. I was familiar with the show’s British adaptation, but hadn’t spotted the US version until relatively recently in reruns. I fell in love with the beautiful Arlene Francis watching those reruns. She was a regular panelist on the show, and the embodiment of elegance. Host of the show was the erudite and genteel John Daly, the much-respected journalist and broadcaster. Daly became the son-in-law of Chief Justice Earl Warren, when he married Warren’s daughter, Virginia.

31. 1856 antislavery novel : DRED
Harriet Beecher Stowe’s first novel ended up being her most famous, “Uncle Tom’s Cabin”. She followed it up with an 1856 novel, “Dred: A Tale of the Great Dismal Swamp”.

32. Contents of some charges : TNT
TNT is an abbreviation for trinitrotoluene. The explosive chemical was first produced by the German chemist Joseph Wilbrand in 1863, who developed it for use as a yellow dye. TNT is relatively difficult to detonate, so it was on the market as a dye for some years before its more explosive properties were discovered.

37. Seven-time Rose Bowl winner, in brief : OSU
The athletic teams of Ohio State University are called the Buckeyes, named after the state tree of Ohio. In turn, the buckeye tree gets its name from the appearance of its fruit, a dark nut with a light patch, thought to resemble a “buck’s eye”.

46. Banned fruit spray : ALAR
The chemical name for Alar, a plant growth regulator and color enhancer, is daminozide. It was primarily used on apples, but was withdrawn from the market when it was linked to cancer.

47. Onetime D.D.E. command : ETO
Dwight D. Eisenhower was in command of the European Theater of Operations during WWII. If you’re a WWII buff like me, then I recommend you take a look at a great made-for-TV movie starring Tom Selleck as Eisenhower called “Ike: Countdown to D-Day”

48. Atlas, e.g. : HE-MAN
Charles Atlas’s real name was Angelo Silciliano, an Italian who moved to America in his teens. The story he told, and turned into a great advertising campaign, was that as a 97-pound weakling he once had sand kicked into his face by a bully. He went on a bodybuilding regime, developed his muscles, and then marketed the concept across America. He took the name Charles Atlas after he was told that his new-found body looked like that of a statue of the Greek god Atlas sitting on top of a hotel in Coney Island.

6. Jumper, for one : SLEEVELESS DRESS
“Jumper” is one of those terms that caused me no end of grief when I moved to the US. I think my wife-to-be was close to dumping me on one of our first dates when she heard me talking about jumpers that I wore all the time. You see, where I come from a jumper is a sweater, and can be worn by males and females alike. The dress known as a jumper in the US, back in Ireland we’d call a pinafore, or pinafore dress.

10. Unit of resistance : OHM
The unit of electrical resistance is the ohm (with the symbol omega), named after Georg Simon Ohm, the German physicist. Ohm was the guy who established experimentally that the amount of current flowing through a circuit was directly proportional to the voltage applied, (V=IR) a relationship that every school kid knows as Ohm’s Law.

11. English Midlands city that is home to the largest outdoor covered market in Europe : LEICESTER
Leicester is the county town of Leicestershire in the English Midlands. Leicester has been associated with many famous Englishman including actor Richard Attenborough and his brother David, the world famous naturalist, both of whom grew up there. Graham Chapman, of “Monty Python” fame was born there, and singer Englebert Humperdinck although born in India, grew up in Leicester.

12. Sweet to the ears : DULCET
Dulcet, meaning pleasing to the ear, is such a lovely word, I think. It comes from the Old French word “doucet”, a diminutive of “doux”, the French for “sweet”.

22. One of the 13 orig. colonies : DEL
The state of Delaware takes its name from Virginia’s first colonial governor, Englishman Thomas West, 3rd Baron De La Warr. Delaware is known as the First State as it was the first to ratify the US Constitution, in 1787.

27. The Berlin Wall started as one in 1961 : FENCE
I once worked for a man who, when serving with the US Army, had the job of filming the construction of the Berlin Wall in the early sixties. Starting in 1952, the border between East And West Germany was strictly controlled, with the help of fences and walls running over 850 miles from the Baltic Sea to Czechoslovakia. There was a big “gap” in the restrictive barrier, in the divided city of Berlin. Restrictions of movement in between East and West in the city were very lax for most of the fifties (you could take a subway train “under” the border, for example), and the Berlin became a gateway for emigration, almost exclusively from East to West. In August 1961, under orders from Nikita Krushchev in Moscow, East Germany closed the border in Berlin, and construction started on the fortified wall.

34. Adversaries of 7-Down : SOVIETS
The term “soviet” comes from the Russian word “sovet” meaning “council”.