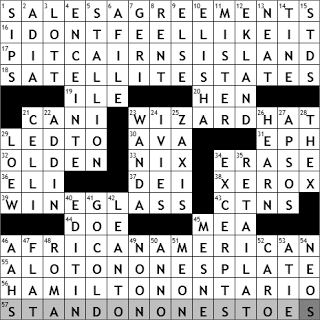 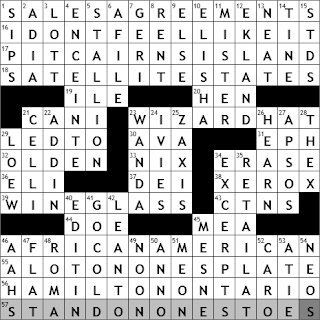 
Today’s Wiki-est, Amazonian Googlies
Across
17. Last of Nordhoff and Hall’s “Bounty Trilogy” : PITCAIRN’S ISLAND
Charles Nordhoff and James Norman Hall wrote “Mutiny on the ‘Bounty'”, based on a true story. They followed up their successful novel with two more works, creating what is now called the “Bounty Trilogy”. The three books are:

30. One of Frank’s four wives : AVA
Ava Gardner is noted for her association with some big movies, but also for her association with some big names when it came to the men in her life. In the world of film, she appeared in the likes of “Mogambo” (1953), “On the Beach” (1959), “The Night of the Iguana” (1964) and “Earthquake” (1974). The men in her life included husbands Mickey Rooney, Artie Shaw and Frank Sinatra. After her marriages had failed (and perhaps before!) she had long term relationships with Howard Hughes and bullfighter Luis Miguel Dominguin whom she met through her friend Ernest Hemingway.

Frank Sinatra was the only child of Italian immigrants living in Hoboken, New Jersey. Like so many of our heroes, Sinatra had a rough upbringing. His mother was arrested several times and convicted of running an illegal abortion business in the family home. Sinatra never finished high school, being expelled for rowdy conduct, and he was arrested on a morals charge as a youth for carrying on with a married woman, an offence back then. But he straightened himself out by the time he was twenty, and started singing professionally.

31. Book before Phil. : EPH
It seems that the Epistle of Paul to the Ephesians is now regarded by scholars as written “in the style of Paul” by someone who was influenced by Paul’s thought.

33. Turn down : NIX
The use of nix as a verb, meaning “to shoot down” dates back to the early 1900s. Before that it was just the noun, meaning “nothing”. This comes from the German “nichts”, which also means “nothing”.

36. Philanthropist/art collector ___ Broad : ELI
Eli Broad made his fortune in real estate, one of the founders of Kaufman and Broad, that we know these days as KB Homes. His net worth was recently reported at just over $5 billion.

38. ColorQube maker : XEROX
ColorQube is a line of printers produced by Xerox.

39. Port terminal? : WINE GLASS
The city of Oporto in Portugal gave its name to port wine in the late 1600s, as it was the seaport through which most of the region’s fortified wine was exported.

44. Unknown name : DOE
Though the English court system does not use the term today, John Doe first appeared as the “name of a person unknown” in England in 1659, along with another unknown, Richard Roe. Joe Blow is just a variant of John Doe, and Jane Doe is an unknown female.

46. Term popularized by Jesse Jackson : AFRICAN AMERICAN
Jesse Jackson didn’t come up with the term “African American”, but he did bring it into the mainstream by using it in the media, after which the media outlets themselves adopted it. “African American” was embraced quite readily, partly as it took the same form as other ethnic groups (like Irish Americans, say).

Hamilton, Ontario is a port city on the western end of Lake Ontario. It is a popular location for film shoots, and has been used for mainstream movies such as “Gone in 60 Seconds”, “X-Men”, “Hairspray” and “The Incredible Hulk”.

2. #3 hit from the 1997 album “Surfacing” : ADIA
Based on what I just read, the song “Adia”, co-written by Sarah McLachlan, was written as an apology to her best friend … for stealing her ex-boyfriend, and then marrying him!

3. He followed Dole in the Senate : LOTT
Trent Lott was raised Democrat in Mississippi, but served in Congress as a Republican. He ran into trouble about remarks he made that were interpreted as being racially motivated, and ended up resigning in 2007.

4. Pregnant : ENCEINTE
Enceinte is the French word for “pregnant”, sometimes used in English, although I haven’t heard it outside of France to be honest.

5. Casanova : STALLION
Giacomo Casanova was an 18th century adventurer from Venice. We know so much about him, and his reputation as a womanizer, because he wrote his autobiography “Histoire de ma vie” (Story of My Life). A guy recounting stories of his love life and conquests. All true, I am sure …

7. “The Facts of Life” actress Jewell : GERI
Geri Jewell’s appearances on the TV show “The Facts of Life” were remarkable in that she was the first actor with a disability to have a regular role on a prime time show. Jewell was born with cerebral palsy.

10. Wonder-working biblical figure : ELISHA
The prophet Elisha is mentioned both in the Hebrew Bible and the Qur’an. In the Islam tradition, Elisha is usually known by his Arabic name, Alyasa.

21. They’re straddled in pits : CELLI
Celli is the plural of “cello”.

23. Film fish : WANDA
I think that the 1988 comedy “A Fish Called Wanda” is very under-appreciated. It was co-written by, and stars, John Cleese and has an exceptional cast including Jamie Lee Curtis, Kevin Kline and Cleese’s friend from “Monty Python”, Michael Palin. The “fish” in the film is Wanda the con artist, played by Curtis.

24. Brown’s group : IVIES
The term Ivy League originally defined an athletic conference, but now is used to describe a group of schools of higher education that are associated with both a long tradition and academic excellence. The eight Ivy League Schools are: Brown, Columbia, Cornell, Dartmouth, Harvard, Princeton, the University of Pennsylvania, and Yale.

27. Lhasa ___ (supposed good luck bringers) : APSOS
The Lhasa apso breed of dog originated in Tibet, and is named after Lhasa (the capital city) and apso (a Tibetan word meaning “bearded”). The Lhasa apso has been around since 800 BC and is one of the oldest breeds in the world, one very closely related to the ancestral wolf.

28. “___ Factor” (TV talent show) : THE X
“The X Factor” is another one of Simon Cowell’s TV shows, now a franchise, that searches for talented singers. “The X Factor” is in effect a spin-off the the UK show “Pop Idol” (produced as “American Idol” here in the US), and now there are versions of it all over the world. And “The X Factor” is coming to America in 2011. Oh joy …

29. MGM co-founder : LOEW
Marcus Loew was a New Yorker, born into a poor Jewish family. He started out in a penny arcade business and used its profits to buy into a nickelodeon. He built a whole chain of movie theaters, and then moved into the production of films so that he could guarantee supply of features that he could show in his theaters. Eventually he pulled together the Metro-Goldwyn-Mayer film production company, passing away just three years after he inked the deal.

45. Intervening, in law : MESNE
Mesne is a legal term describing perhaps an intermediate or intervening step in a process.

51. “Turnin ___” (2009 Keri Hilson hit) : ME ON
Keri Hilson started her career as a songwriter producing hit tracks for others, but she has been making a name for herself as a singer in her own in the past few years. Having said that, it’s a name that I didn’t know, but I live in the past …