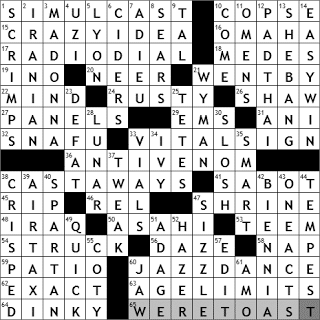 Today’s Wiki-est, Amazonian Googlies
Across
10. Savannah growth : COPSE
A savanna (also savannah) is a grassland. If there are any trees, by definition they are small and widely spaced so that light can get to the grasses and they can grow unhindered.

18. Iron Age people : MEDES
The Medes were an ancient people that lived in what is now northwestern Iran. The Medes held sway in the region only for about 60 years, until Cyrus the Great came along and defeated Astyages, the king of Media (not to be confused with Howard Stern, the self-claimed “king of all media”!).

19. Mythical mortal who helped raise Dionysus : INO
Dionysus was the party animal of Greek mythology. He was the god of the wine, ritual madness and ecstasy! His Roman equivalent was Bacchus.

26. 1925 Literature Nobelist : SHAW
George Bernard Shaw was a very successful Irish playwright. He is the only person to have been awarded both a Nobel Prize for Literature, and an Oscar. Shaw won his Oscar for the adapting his own play “Pygmalion” for the 1938 film of the same name starring Leslie Howard and Wendy Hiller. Most people are more likely to have seen the musical adaption of “Pygmalion” that went by the title … “My Fair Lady”.

31. Frog-eating bird : ANI
The tropical bird called the ani is related to the cuckoo, although it doesn’t go around robbing other birds’ nests like a cuckoo.

32. Tangle : SNAFU
SNAFU is an acronym standing for Situation Normal: All Fouled Up (well, that’s the “polite” version!). As you might imagine, the term developed in the US Army, during WWII.

Antivenom is made by extracting venom from say a snake (so called “milking”) and then diluting it and injecting it into a host animal (like a cat, horse or sheep). The animal undergoes an immune response and produces antibodies to neutralize the poison. The antibodies are harvested from the animal’s blood and are stored for use with victims who are bitten by the same snake, or by some other creature that injects the same or a similar venom.

41. French for “clog” : SABOT
There is a story that disgruntled textile workers would kick their wooden shoes, called sabots, into the looms in order to disable them so that they didn’t have to work. This act of vandalism was named for the shoe, an act of … sabotage.

45. Washington Irving hero, informally : RIP
“Rip Van Winkle” is a short story written by Washington Irving. The story was an instant hit, and was adapted for the stage just a few years after its first publication in 1819. Since then “Rip” has featured on the small screen, big screen and there is even an operetta.

50. Japanese brew : ASAHI
Asahi is Japanese for “morning sun”. Here Asahi refers to a beer, and the brewery that produces it. Asahi introduced a “dry beer” in 1987, igniting a craze that rocketed Asahi to the number one spot in terms of beer production in Japan, with Sapporo close behind.

60. Bob Fosse specialty : JAZZ DANCE
Bob Fosse won more Tony Awards for choreography than anyone else, a grand total of eight. He also won an Oscar for Best Director for his 1972 movie “Cabaret”, even beating out the formidable Francis Ford Coppola who was nominated that same year for “The Godfather”.

64. Two-bit : DINKY
Here’s a word that has practically the opposite meaning back in Ireland where I come from. In the US something that is dinky is insignificant. In Ireland something dinky is neat and dainty.

Down
2. Like much oil : IRANIAN
Iran is the fourth largest oil producer in the world. The US comes in at number three, while Saudi Arabia is the second biggest producer. Top of the table is our old friend Russia.

3. One often seen with her child : MADONNA
“Madonna” is an old Italian term for a woman with status, and has for centuries been used to describe the Virgin Mary especially when she is depicted in an image with the baby Jesus.

4. Magazine holder : UZI
The first Uzi sub-machine gun was designed in the late 1940s, by Major Uziel Gal, who gave his name to the gun.

5. Lord ___ (overseer of Scottish heraldry) : LYON
The Lyon King of Arms is the officer responsible for regulating heraldry in Scotland, and is the person who would issue new coats of arms for example. I’ve never heard of him, although I reckon “The Lyon King of Arms” would be a great name for a musical …

8. Brands … or carrier of brands : SEARS
Richard Sears was a station agent on the railroad. In the late 1800s he bought up a shipment of unwanted watches that was left at his depot, and sold the watches to other agents up and down the line. He was so successful that he ordered more watches, and then came up with the idea of using a catalog to promote more sales. The catalog idea caught on, and by the mid 1900s Sears was the biggest retailer in the whole country.

13. Ball of wax : SHEBANG
The word “shebang” is probably a derivative of “shebeen”, an Irish word for a “speakeasy”, where liquor was drunk and sold illegally. In English “shebang” was originally a “hut” or a “shed”. Just how this evolved into the expression “the whole shebang” is unclear.

The phrase “whole ball of wax” is probably a corruption of “the whole bailiwick”.

21. Longtime Rolling Stones bassist : WYMAN
Bill Wyman was one of the first members of the Rolling Stones, joining in 1962 and staying with the band until 1992. Wyman is multi-talented. As well as having played bass guitar with the Stones, he is a very talented photographer whose work has been shown in many galleries around the world. He is also an amateur archaeologist, and markets his own design of metal detector for the amateur relic hunter.

28. Like the Bay of Rainbows : LUNAR
The Bay of Rainbows, usually known by its Latin name “Sinus Iridium”, is considered by lunar observers to be one of the most beautiful features on the moon.

40. One of 300 at Thermopylae : SPARTAN
The Battle of Thermopylae took place in 480 BC, fought between the Persian Empire of Xerxes and an alliance of Greek city-states led by Sparta. The Greeks chose the narrow pass of Thermopylae to make a stand against the advancing Persian army, as there they could minimize the advantage that the Persians had with their large army. The pass of Thermopylae was so narrow that only one chariot could pass through at a time. Famously, the vastly outnumbered Spartan forces held this pass with hand-to-hand combat for two full days, until a local resident showed the Persians a way around the pass so that the Greek army could be attacked and annihilated from the rear.

42. Stretches between Ryder Cups : BIENNIA
The Ryder Cup competition is held every two years, a biennium …

The Ryder Cup trophy was donated by Samuel Ryder, an English entrepreneur. Ryder made his money selling garden seeds in small packets. He only took up golf in his fifties, but became quite the enthusiast, eventually donating the trophy in 1927, when it was valued at 100 guineas.

55. President after Auriol : COTY
René Coty was the President of France from 1954 to 1959 (succeeding Vincent Auriol), and notably presided over the Algerian War. Coty resigned after five years, making way for the 7-year term of Charles de Gaulle.