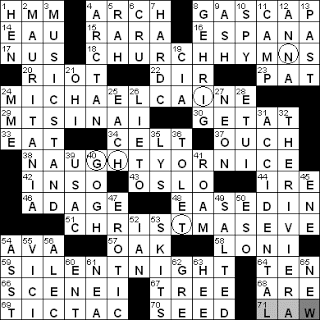 THEME: SILENT NIGHT … the five circled squares spell the word NIGHT, and each letter of NIGHT is SILENT, not pronounced, in its answer i.e the N in (CHURCH) HYMNS, the I in (MICHAEL) CAINE, the GH in NAUGHTY (OR NICE) and the T in CHRISTMAS (EVE)
COMPLETION TIME: 19m 59s
ANSWERS I MISSED: 0

17. N N N : NUS
The Latin equivalent of the Greek letter “nu” is “N”. An uppercase nu looks just like the Latin capital N, but the lowercase nu looks like our lowercase “v”. Very confusing …

18. Carols, often : CHURCH HYMNS
The word “carol” came into English via the Old French word “carole”, which meant a “dance in a ring”. When “carol” made it into English, about 1300, it was used to describe a dance, as well as a joyful song. Around 1500 AD carols that were sung came to be associated with Christmas.

24. Scrooge player of film : MICHAEL CAINE
Michael Caine appears as the miserly Ebeneezer Scrooge in the musical comedy “The Muppet Christmas Carol” released in 1992. The Muppets were the creation of Jim Henson, who passed away in 1990, so this production by the Jim Henson Company was directed by Brian Henson, Jim’s son.

34. Bird, e.g., once : CELT
Larry Bird played basketball for the Boston Celtics from 1978 to 1992. Bird has a lot of very loyal fans, and some might even be described as fanatical. In 2005 an Oklahoma City man was convicted of a crime involving a shooting. On being sentenced to 30 years imprisonment, the guilty man requested that the sentence be changed to 33 years so that it matched the number on Larry Bird’s jersey. The judge obliged …

38. Polar opposites? : NAUGHTY OR NICE
Nice wording for a clue. Santa is at the North Pole when he checks his list of those who are naughty or nice.

43. Cold capital : OSLO
Oslo, the capital of Norway, is an ancient city founded around 1048. The medieval city was destroyed by fire in 1624, and was rebuilt by the Danish-Norwegian king Christian IV and renamed Christiana. In 1877, there was an official change of the spelling to “Kristiana”, and then more recently in 1925 the name was restored to the original Oslo. Things have almost gone full circle for now the center of Oslo, the area that would have been contained by the original medieval walls, has apparently been renamed Christiana.

51. Time before the present day? : CHRISTMAS EVE
Clever wording also. The time/day before the day presents are distributed (Christmas Day) is Christmas Eve. But in our house, because my wife is so impatient, the gifts are opened on Christmas Eve …

58. TV’s Anderson : LONI
Loni Anderson’s most famous role was that of Jennifer Marlowe on the sitcom “WKRP in Cincinnati”. Anderson has been married four times, most famously to actor Burt Reynolds from 1988 to 1993.

59. Song of 1859 … or what the five circled letters represent? : SILENT NIGHT
The beautiful Christmas Carol “Silent Night” was first performed in Austria in 1818, with words by a priest, Father Joseph Mohr, and melody by an Austrian headmaster, Franz Xaver Gruber. The carol was of course in German and called “Stille Nacht”. The English translation that we use today was provided to us by an American bishop, John Freeman Young from Florida, in 1859.

66. It takes place on board a ship at sea in “The Tempest” : SCENE I
William Shakespeare’s “The Tempest” tells the story of Prospero, who was removed from the throne of Milan and banished to a deserted island along with his daughter, Miranda. Prospero learns sorcery on the island, and eventually conjures up a tempest that drives those who usurped his throne onto the shores of the island (in particular his own brother, Antonio).

69. Bit of candy : TIC TAC
Tic Tacs aren’t American candy … they’re made by the Italian company Ferrero, and have been so since their introduction in 1969.

Down
2. Its capital is Nouakchott : MAURITANIA
The Islamic Republic of Mauritania is a country in North Africa, on the Atlantic coast. The country is named after the old Roman province of Mauretania, although the ancient province was located further north in what is now Morocco and part of Algeria.

5. Exclamation heard 12 times in Lady Gaga’s “Bad Romance” : RAH
I’ve seen Lady Gaga interviewed on television a few times, and she sure is “unique”. Her music is of course out of my league, but she does know how to put on a show.

The music video released with Lady Gaga’s 2009 hit “Bad Romance” involves drugs, supermodels, the Russian Mafia and sexual slavery. Like I said, out of my league …

6. Word on a vin bottle : CRU
“Cru” is a term used in the French wine industry that means “growth place”. So, it is the name of the location where the grapes were grown, as opposed to the name of a specific vineyard. The terms “premier cru” and “grand cru” are also used, but the usage depends on the specific wine region. Generally it is a classification awarded to specific vineyards denoting their potential for producing “great” wines. Grand cru is reserved for the very best vineyards, with premier cru the level just below.

8. The Iron Horse of baseball : GEHRIG
Lou Gehrig was known as a powerhouse. He was a big hitter and just kept on going, breaking the record for the most consecutive number of games played, and he stills holds the record for the most career grand slams. His durability earned him the nickname “The Iron Horse”. Sadly, he died in 1941 at 37-years-old from ALS, a disease we now call “Lou Gehrig’s Disease”.

10. 19-Down employee : SPY
(19. Employer of 10-Downs: Abbr. : CIA)
The Central Intelligence Agency is the successor to the Office of Strategic Services formed during WWII, and was chartered by the National Security Act of 1947.

12. Lady whom Don Giovanni tries to seduce : ANNA
“Don Giovanni” is a comic opera by Mozart, with the libretto in Italian by Lorenzo Da Ponte. The opera follows the adventures of Don Giovanni, a young, rakish nobleman who finally comes to a bad end.

27. #10 on a table : NEON
Neon is one of the noble gases, those elements over on the extreme right of the Periodic Table. Because of their “full” complement of electrons, noble gases are very nonreactive. The noble gases are helium, neon, argon, krypton and xenon.

28. Seamstress’s aid : ETUI
An etui is an ornamental case used to hold small items, in particular sewing needles. We imported the design, and the word “etui”, from French. The French also have a modern usage of “etui” … a case for carrying CDs!

35. Lily, in Lille : LYS
“Lys” is the French word for “lily”, as in fleur-de-lys, the heraldic symbol often associated with the French monarchy.

Lille is a large city in very north of France sitting right on the border with Belgium. The name “Lille” is a derivation of the term “l’isle” meaning “the island”.

39. Car-racing org. : USAC
The United States Auto Club came into being right after the 1955 Le Mans disaster, the worst motor-sports catastrophe in history in which 84 people were killed (one driver and 83 spectators). Up to this point, the American Automobile Association (AAA) has been sanctioning auto races, but the AAA withdrew in light of the risks involved. So, the USAC was formed by the owner of the Indianapolis Motor Speedway and took charge of enforcing rules related to championship auto racing.

40. Van follower : GOGH
Vincent Van Gogh was a Dutch post-impressionist painter who seems to have led a very tortured life. He only painted for the last ten years of his life, and enjoyed very little celebrity while alive. Today many of his works are recognized by most of us, and fetch staggering sums in auction houses. Van Gogh suffered from severe depression for many of the final years of his life. When he was only 37, he walked into a field with a revolver, and shot himself in the chest. He managed to get himself back to the inn where he was staying but died there two days later.

45. Chemical suffix : ENE
An alkene is an organic compound made up of carbon and hydrogen atoms. It differs from an alkane in that it has at least one C=C double bond. The simplest alkene is the gas ethylene, a major raw material in the manufacture of plastics (like polyethylene).

52. Ziering of “90210” : IAN
“Beverly Hills, 90210” is a drama that aired on Fox from 1990 to 2000. The show follows the lives of little rich kids in Beverly Hills. Many of the cast members have made it big following their appearances on “90210”, including Jason Priestly, Luke Perry, Shannen Doherty, Jennie Garth and Tori Spelling. I’ve never even seen one episode …

54. Bob Cratchit to Scrooge, e.g.: Abbr. : ASST
The classic 1843 novella “A Christmas Carol” by Charles Dickens has left us with a few famous phrases and words. Firstly, it led to popular use of the phrase “Merry Christmas”, and secondly it gave us the word “scrooge” meaning a miserly person. And thirdly, everyone knows that Scrooge uttered the words “Bah! Humbug!”.

55. Part of a boast : VICI
The oft-quoted “Veni, vidi, vici” (“I came, I saw, I conquered”) was apparently written by Julius Caesar. The words date back to 47 BC and refer to the short war between Rome and Pharnaces II of Pontus.

62. Princeton Review subj. : GRE
Passing the Graduate Record Examination is usually a requirement for entry into graduate school here in the US.