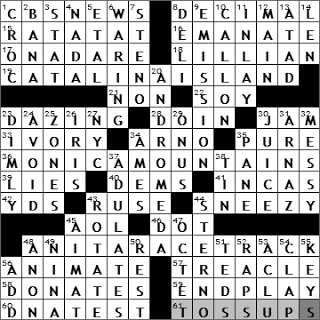 THEME: SANTA … all the theme answers follow the word SANTA i.e. (SANTA) CATALINA ISLAND, (SANTA) MONICA MOUNTAINS, (SANTA) ANITA RACETRACK
COMPLETION TIME: Didn’t finish
ANSWERS I MISSED: too many in the top of the grid (after a couple of champagne cocktails … Merry Christmas!)

1. “The Twentieth Century” producer : CBS NEWS
“The Twentieth Century” is a documentary television series broadcast by CBS from 1957 to 1966. The show is narrated by Walter Kronkite, and features newsreel footage covering the major events of the 20th century up to that point. After the show was pulled off the air, it was replaced by a sister series that ran for a few years called “The 21st Century” which focuses on the future. It would be interesting to take a peek at a few of those shows now, wouldn’t it?

18. 1970s “first mother” : LILLIAN
Lillian Carter was the very visible mother of President Jimmy Carter. Ms. Carter was a noted social activist both in this country and abroad. At the age of 68 years, in 1966, she joined the Peace Corps and worked for 21 months in India caring for people sick with leprocy. Ms. Carter was quite a character, noted for her snappy comments. When her son, then Governor Carter of Georgia, told her he was going to run for president, she shot back, “President of what?”

19. Santa ___ : CATALINA ISLAND
Living here in California, I always thought that the big island off our coast was just called Catalina Island, but the full name is in fact Santa Catalina Island. Catalina is a fair size, about 22 miles long and 5 miles wide, and has almost 4,000 residents. It is part of Los Angeles county and lies just 22 miles away from the city of LA.

21. Security Council veto : NON
The United Nations Security Council has 15 members, 5 of whom are permanent and who have veto power over any resolution. The 10 non-permanent members are elected into place, and hold their seats for two years. The UN charter requires that authorized representatives of the member nations are always present at UN headquarters so that the Security council can meet at any time. The permanent members are:
– China
– France (who veto by declaring “non!”)
– Russia
– United Kingdom
– United States

22. Makeup of some burgers : SOY
I am a vegan (for health reasons) and don’t eat animal products. I shy away from “fake meat” products as they always disappoint, but soy burgers, they are really quite delicious …

34. Sight from the top of the Leaning Tower : ARNO
Pisa is right on the Italian coast, sitting at the mouth of the River Arno, and is famous for its Leaning Tower. The tower is actually the campanile (bell tower) of the city’s cathedral, and it has been leaning since it was completed in 1173. Just shows you how important good foundations are …

36. Santa ___ : MONICA MOUNTAINS
The Santa Monica Mountains is one of the Transverse Ranges of Southern California. The Transverse Ranges are so called because they run in an East-West direction, as opposed to the general North-South orientation of the rest of California’s coastal ranges.

41. Members of an ancient empire : INCAS
The Inca people emerged as a tribe around the 12th century, in what today is southern Peru. The Incas developed a vast empire over the next 300 years, extending along most of the western side of South America. The Empire of course fell to the Spanish, finally dissolving in 1572 with the execution of Tupac Amaru, the last Incan Emperor.

44. Happy cohort? : SNEEZY
In the original Brothers Grimm fairy tale “Snow White”, the seven dwarfs were not given any names. The names were created for the 1937 classic animated film “Snow White and the Seven Dwarfs” from Walt Disney. The seven dwarfs are:
– Doc (the leader of the group)
– Grumpy (that would be me, according to my wife …)
– Happy
– Sleepy
– Bashful
– Sneezy
– Dopey

45. Company with an I.P.O. in both 1992 and 2009 : AOL
Founded as Quantum Computer Services in 1983, America Online changed its name in 1989. As the company went international, the acronym AOL was used in order to shake off the “America-centric” sound to the name. During the heady days of AOL’s success, the company could not keep up with the growing number of subscribers, so people trying to connect often encountered busy signals. That’s when users called AOL “Always Off-Line”.

AOL’s initial, Initial Public Offering was in 1992. Years later the company was picked up by Time Warner (not a great investment for Time Warner, it turned out). AOL was spun off as a separate entity again in 2009 and the new company had a “second” IPO that same year.

48. Santa ___ : ANITA RACETRACK
Santa Anita Park is a thoroughbred racetrack in Los Angeles County, California. It is the oldest racetrack in Southern California and opened on Christmas Day in 1934. During WWII the racetrack was used as an internment camp for Japanese Americans (one of whom was actor George Takei). About 17,000 internees lived in the stables at the racetrack during the war.

57. Schmaltz : TREACLE
“Schmaltz” is an informal term used to describe things which are excessively sentimental. The word comes from the Yiddish “shmalts”, which means “melted fat”, and indeed the modern German word for fat or grease is Schmaltz, and can be used in the same figurative way in that language.

59. Bridge topic : ENDPLAY
In bridge, the world’s greatest card game (says me!), an endplay is one in which a defender is deliberately given the lead by the declarer at the end of play, so that the declarer benefits by winning more tricks.

60. Lab procedure : DNA TEST
I’ve always been impressed by the fact that the DNA of living things is so very similar across different species. Human DNA is almost exactly the same for every individual (to the degree of 99.9%). However, those small differences are sufficient to distinguish one individual from another, and to determine if individuals are close family relations.

2. Actor who played the villain in 2009’s “Star Trek” : BANA
Eric Bana is an Australian actor who enjoyed a successful career in his home country before breaking into Hollywood playing an American Delta Force sergeant in “Black Hawk Down”. A couple of years later he played the lead in Ang Lee’s 2003 movie “The Hulk”, the role of Dr Bruce Banner. More recently he played the Romulan villain Nero, in the 2009 “Star Trek” movie.

3. Doctor’s directive : STAT
The exact etymology of “stat”, used to mean “immediately” in the medical profession, seems to have been lost in the mists of time. It probably comes from the Latin “statim” meaning “to a standstill”. How that morphed into “at once” is unclear.

4. Zip : NADA
“Nada” is the Spanish word for “nothing”. “De nada” translates literally from the Spanish as “of nothing”, and is used to mean “you’re welcome” or “don’t mention it”. The French have the same expression “de rien”, also translating to “of nothing” and used the same way.

The use of the word “zip” to mean “nothing” dates back to the early 1900s when it was student slang for being graded zero on a test.

5. Endnote abbr. : ET AL
Et alii is the equivalent of et cetera, with et cetera being used in place of a list of objects, and et alii used for a list of names.

7. Old office worker : STENO
Stenography is the process of writing in shorthand. The term comes from the Greek “steno” (narrow) and “graphe” (writing).

8. Place for a ham : DELI
The word “delicatessen” came into English from German, in which language “Delikatessen” means “delicacies, delicious things to eat”. The ultimate origin is the Latin “delicatus” meaning “giving pleasure, delightful”.

9. E.P.A. measurement : EMISSION
The Environmental Protection Agency was set up during the Nixon administration, and began operation at the end of 1970.

13. Slightly : A TAD
Back in the 1800s a “tad” was used to describe a young child, and this morphed into our usage meaning a small amount in the early 1900s. The original use of tad to mean a child is very likely a shortened version of “tadpole”.

20. Wife of Perseus : ANDROMEDA
In Greek mythology, Cassiopeia upset Poseidon by boasting of her own beauty, so he decided to punish her. Poseidon, the god of the sea, sent a whale to persistently attack the coast of the kingdom of Ethiopia where Cassiopeia ruled as queen. Cepheus, king of Ethiopia and husband to Cassiopeia, was told by an oracle that the only way to rid themselves of the whale was to sacrifice his virgin daughter, Andromeda. So, poor Andromeda was chained, naked, to a rock by the coast. Fortunately, along comes the gallant Perseus who frees her, and the two marry. They don’t quite live happily ever after, but that’s another story …

27. Former U.S. capital: Abbr. : NYC
New York City served as the capital of the United States from 1785 until 1790. The seat of government back then was Federal Hall located on Wall Street, It was here that George Washington was inaugurated as the country’s first President in 1789.

31. “I Love Lucy” executive producer : ARNAZ
Desi Arnaz was of course famous for his turbulent marriage to Lucille Ball. Desi Arnaz was a native of Cuba, and was from a privileged family. His father was Mayor of Santiago and served in the Cuban House of Representatives. However, the family had to flee to Miami after the 1933 revolution led by Batista.

34. City north of Des Moines : AMES
The city of Ames Iowa is famous for holding the Ames Straw Poll in advance of most presidential elections. The poll in question is used to gauge the level of support for two or more Republican candidates, although non-Republicans are allowed to cast a vote. To vote one has to be an Iowa resident and one must buy a ticket to the fundraising dinner at which the vote is taken. The event gets a lot of coverage, so it boosts the local economy as journalists hit the town. It is a very successful fundraiser for the Republican Party in Iowa as well, but the usefulness of the straw poll in predicting the eventual winner of the nomination is less clear. There have been five straw polls since 1979, and just 2 out of 5 times the poll winner went on to capture the party’s nomination.

43. Circumvolve : ROTATE
To circumvolve is to revolve, or cause to revolve. The Latin prefix “circum-” means “around” and the verb “volvare” means “to turn round, roll”.

44. “Perfection under fire” product : STERNO
Sterno is a very useful product, a “jellied alcohol” that usually comes in a can. The can is opened and the contents burn very easily and persistently. The brand name “Sterno” comes from the original manufacturer, S. Sternau & Co. of Brooklyn, New York.

Granada is a city and province in Andalusia in the south of Spain.

51. Turner and others : TEDS
Ted Turner’s big initiative in the word of business was the founding of CNN, the first 24-hour cable news channel. Turner never graduated from college, as he was expelled from Brown University for having a female student in his dormitory room. Years later, in 1989, Brown awarded him an honorary B.A.

53. Opponent of the Patriot Act, for short : ACLU
The American Civil Liberties Union (ACLU) is actually made up of two non-profits. The ACLU foundation focuses on litigation and communication, whereas the arm known as the American Civil Liberties Union focuses on lobbying, mainly in Washington DC. The ACLU has its roots in the First World War, providing legal advice and support to conscientious objectors.