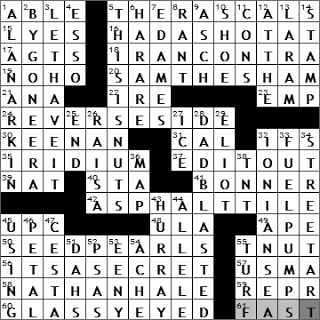 Across
1. Word that keeps the same meaning if “cap-” is added at the front : ABLE
Able and capable!

5. Group whose 1968 album “Time Peace” was #1 : THE RASCALS
The Rascals was a band that was big in the late sixties and early seventies. It was a “blue-eyed soul” group, which I just learned is white guys playing soul music. I am so out of touch …

15. They burn : LYES
Historically, lye was hydrated potash (potassium hydroxide). Nowadays when we purchase lye it is caustic soda (sodium hydroxide). Crystal Drano was developed in 1932 by one Harry Drackett, who produced the product in his own company until it was bought over in 1965 by Bristol Myers. The crystalline form of Drano is sodium hydroxide (lye) as well as sodium nitrate, sodium chloride (table salt) and aluminum. The product works as the lye reacts with any fats in the clog forming soap. The lye also reacts with finely divided aluminum generating tremendous heat, creating boiling and churning so that any hair or other deposits are cut by the sharp edges of the crystals. Having said that, boiling water poured down the drain is often just as effective.

17. Some people with sports M.B.A.’s: Abbr. : AGTS
Some MBA’s in the sports world make great agents I hear.

18. Subject of 1987 Congressional hearings : IRAN-CONTRA
The Iran-Contra affair came to light in 1986. The “Iran” part of the scandal was the sale of arms to Iran by the Reagan administration, initially to facilitate the release of US hostages. This was done in secret largely because there was ostensibly a US arms embargo in place against Iran. The “Contra” part of the scandal arose when the man in charge of the operation, Oliver North, took funds from the arms sales and funneled the cash to the Contra militants who were fighting to topple the government in Honduras.

19. N.Y.C. neighborhood : NOHO
NoHo is short for North of Houston (street), and is the equivalent area to SoHo, South of Houston.

20. Pharaoh’s head? : SAM THE SHAM
Sam the Sham was the front man for the Pharaohs. He wrote their big hit “Wooly Bully”, released in 1965.

21. Bibliophile’s suffix : ANA
An ana (or plural anas) is a collection, including literature, that represent the character of a particular place or a person. Ana can be used as a noun, or as a suffix.

22. Mayo setting: Abbr. : IRE
County Mayo is in the west of Ireland, and is one of my favorite parts of the country. “Mayo” is an anglicized spelling of the county’s name in Irish, “Maigh Eo”, which is pronounced as “Mayo” and means “plain of the yew trees”. One of the most famous spots in Mayo is Croagh Patrick (a 2,500 feet peak that many devout Catholic pilgrims ascend in their bare feet).

30. Coach Mike of the 1994 Stanley Cup-winning Rangers : KEENAN
Mike Keenan is a former coach in the National Hockey League. One of the highlights of his career was leading the New York Rangers to their first Stanley Cup win in over fifty years, in 1993.

31. ___ Poly, school nickname : CAL
Cal Poly is more familiar name for California Polytechnic State University. There are actually two Cal Poly institutions, one in San Luis Obispo (the most famous) and one in Pomona.

35. Platinum-group element : IRIDIUM
The element Iridium is represented by the symbol Ir. It is a metal that’s very hard, and is in fact the second densest of all the elements (after Osmium). It is also the metal that is most resistant to corrosion.

39. Basketball Hall-of-Famer Holman : NAT
Nat Holman was one of the very early professional basketball players, retiring from the game as a player in 1930. He played for the Original Celtics (no relation to the Boston Celtics).

41. Yelena ___, Soviet dissident and wife of Andrei Sakharov : BONNER
Yelena Bonner became active in fighting for human rights in the former Soviet Union in the sixties, although she had been helping political prisoners since the forties. She married fellow activist Andrei Sakharov in 1972. She supported her husband while he was internally exiled to Gorky, until she was herself was sent to Gorky as an exile in 1984. Now in her eighties, she is still active, and was the first person to sign the online, anti-Putin manifesto called “Putin must go”.

42. Flooring option : ASPHALT TILE
Asphalt tiles were developed as a replacement for linoleum as they fared better in damp conditions.

It turns out that the asphalt surface on roads (or basketball courts) is more properly called asphaltic concrete, because asphalt itself is just a sticky, black liquid that comes from crude petroleum. Asphalt is used as a binder with aggregate to form the road surface, that asphaltic concrete.

45. Short lines at checkout? : UPC
The person behind the counter at the store might scan the Universal Price Code. The first UPC marked item to get scanned at the front of store was on June 26, 1974, at 08:01 a.m. at Marsh’s supermarket in Troy, Ohio. It was a 10-pack of Wrigley’s Juicy Fruit chewing gum …

48. Diminutive suffix : ULA
The suffix -ula indicates “small”. For example, the word “formula” is from the Latin for “little form”.

55. Wide-headed fastener : T-NUT
A T-nut is so called because it has a t-shape when viewed from the side.

57. Classic football rival of Notre Dame: Abbr. : USMA
Apparently the rivalry between Notre Dame and the US Military Academy (West Point) faded somewhat in second half of the 20th-century. Army’s big rival these days is Navy.

58. Hero whose statue appears in front of Chicago’s Tribune Tower : NATHAN HALE
Nathan Hale fought for the Continental Army during the American Revolution, and was most famous for operating as a spy against the British. It was Nathan Hale who uttered the words, just before he was hanged by his British captors, “I only regret that I have but one life to lose for my country”.

59. Not an orig. : REPR
A reproduction is not an original.

1. Oscar-winning actor with the autobiography “Halfway Through the Door” : ALAN ARKIN
The actor Alan Arkin won his only Oscar (Best Supporting Actor) for his role in “Little Miss Sunshine” from 2006, a movie I just did not understand …

4. ___ Blue (old kerosene brand) : ESSO
I don’t think Esso Blue was sold over here in the US, but it was very big back in Ireland and the UK. We called it paraffin oil, our name for kerosene, and used it in domestic heaters.

6. African capital of 1.5+ million : HARARE
Cecil Rhodes (famous in America as the founder of the Rhodes Scholarship), was a very successful English businessman and South African politician. He founded the De Beers diamond mining company, and also founded the state of Rhodesia, which was named after him. The British colony gained its independence over time in the latter half of the 20th century, and is known today as the countries of Zambia and Zimbabwe. The Rhodesian capital of Salisbury was renamed in 1982 to Harare, the current capital of Zimbabwe.

7. Fess Parker’s TV co-star : ED AMES
Mingo was a Native American character in the TV show “Daniel Boone”, played by Ed Ames (opposite Fess Parker). Ames was also a popular singer in the fifties, one of “The Ames Brothers”.

8. Objurgation : RANT
“To objurgate”, means to scold or rebuke, and comes from the Latin verb “objurgare” which has the same meaning.

9. “East River” novelist, 1946 : ASCH
Sholem Asch was a Polish-born American novelist and dramatist who published his work in Yiddish. One of his plays was “God of Vengeance”, a highly regarded work performed all over Europe and translated into many languages. It opened on Broadway in 1923, but the adult themes (it was set in a brothel, and featured a lesbian relationship) led to the entire cast being arrested and convicted on obscenity charges.

12. “___ Zoo,” 1967 hit : AT THE
“At the Zoo” was written by Paul Simon, and released by Simon and Garfunkel in 1967. The song is a homage to the Central Park Zoo in Simon’s native city of New York. He released a children’s book in 1991 that uses the lyrics of the song as a text, with detailed illustrations. Simon made some changes, dropping the drug references in consideration of his audience …

25. Share of responsibility : END
You had better keep your end up! The idea is that when two people are carrying a load, each should keep his or her “end up” so that the load remains level. The concept has morphed into meaning keeping one’s part of a bargain.

26. Mrs. Gorbachev : RAISA
Raisa Gorbachova was the wife of Soviet leader Mikhail Gorbachev. There’s no doubt that Raisa’s charm and personality helped her husband as he toiled to change the image of the Soviet Union.

27. Number in a pack? : ICE
Ice is something that numbs, “a number”, and is found in a pack, like “pack ice”. Pack ice is ice that floats on the ocean, packed into a single mass.

28. No-good : DAD-BLASTED
“Dad-blasted” is a euphemism for a stronger curse, meaning something that is “no good, darned”.

T. S. Eliot was born in New England but grew up in St. Louis, Missouri. Much of his college education was at Oxford. Clearly he became comfortable with life in England as in 1927 he became a British citizen, and lived the rest of his life in the UK.

32. Highly seismic area off the Greek coast : IONIAN SEA
The Ionian Sea is the part of the Mediterranean that lies between Greece and the southern part of Italy (under the sole of the “boot”). It is one of the most seismically active areas on the planet.

34. Graffiti, e.g. : STREET ART
“Graffiti” is the plural of “graffito”, the Italian for “a scribbling”. The word was first used to describe ancient inscriptions on the walls in the ruins of Pompeii.

38. Basic cable inits. : TNT
TNT stands for Turner Network Television. It made a big splash in the eighties when it started to broadcast old MGM movies that had been “colorized”, not something that was a big hit with the public. In recent years, the TNT programming lineup is governed by the tag-line “We Know Drama”, and includes shows like “Judging Amy”, “ER” and “Cold Case”.

47. Item of sports equipment worn on the wrist : CESTA
A cesta is the wicker scoop work on the hand that is used for catching and throwing the ball in jai alai.

Even though jai alai is often said to be the fastest sport in the world (because of the speed of the ball), in fact golf balls often get going at a greater clip.

51. Three of these make an O : DAHS
Dahs and dits are the sound equivalents of dashes and dots of Morse Code.

Samuel Morse was a very accomplished painter with quite a reputation (he painted a portrait of President John Adams, for example). In 1825 he was in Washington working on a commissioned painting when he received a one-line letter by horse messenger telling him that his wife was ill. He left immediately for his home in New Haven, Connecticut, but by the time he arrived, she had already died, and was buried. This single event spurred him to move from painting to the development of a rapid means of long distance communication, leading to the single-wire telegraph and Morse code.