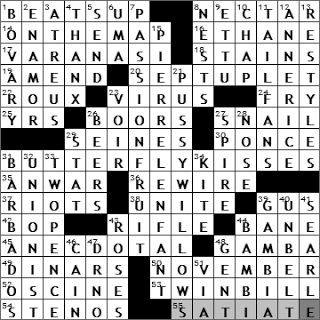 Across
16. Hydrocarbon with two carbons : ETHANE
The main component in natural gas is methane, with the second most voluminous constituent being ethane. Both methane and ethane are combustible, and so traditionally the methane and ethane were burned together to generate heat. However, since the sixties, ethane has been used as a valuable starter material for the production of ethylene, itself a raw material for polyethylene and other plastics. So, these days the ethane is extracted at a refinery before the natural gas is bottled as a fuel.

17. City founded by Shiva, according to legend : VARANASI
Varanasi is a city situated on the Ganges in India, and is probably the oldest, continually inhabited city in the country. Legend has it that the Hindu god Shiva founded Varanasi about 5,000 years ago, although archaeologists date the city at just 3,000 years old.

20. One in a crowded delivery room : SEPTUPLET
In terms of multiple births, the most common result is twins. A much rarer occurrence is the birth of septuplets, seven offspring. The most children carried to term in one birth are eight, octuplets.

22. Soup thickener : ROUX
A roux is a mixture of wheat flour and clarified butter (or other fat, sometimes) cooked together until it can be used as a thickening agent. Roux is an essential ingredient in French cooking, although “healthier” versions are being used more and more these days.

23. It may be written in code : VIRUS
A computer virus has characteristics very similar to a virus found in nature. It is a small computer program that can copy itself and can infect another host (computer).

25. Information on wine bottles: Abbr. : YRS
A wine’s vintage is the year in which the grapes used were grown and harvested. A non-vintage wine is one that is usually a blend of finished wines across a number of years.

29. Fish catchers : SEINES
A seine is a type of fishing net. It is long, and thin, with floats along one long edge (the top) and weights along the bottom edge so that it hangs down in the water. A seine is usually let out into the water from a boat, as the vessel moves slowly in a circle driving fish into the center of the net.

35. First name of a 1978 Peace Nobelist : ANWAR
Anwar Sadat was the third President of Egypt (succeeding President Nasser), right up to the time of his assassination in 1981. He won the Nobel Peace Prize for his role in crafting the Israel-Egypt Peace Treaty of 1978 that followed the Camp David Peace Accords. It was this move that largely led to his assassination two years later.

39. Kahn of Broadway : GUS
Gus Kahn was a songwriter who was very successful on Broadway and in Hollywood. Songs that he penned include “I’ll See You in My Dreams”, “It Had to Be You” and “Makin’ Whoopee!”

48. Viola da ___ (old stringed instrument) : GAMBA
The Viola da gamba is a bass instrument of the viol family, with a tonal range that about matches that of the modern-day cello. It is the second largest of all the viols, so is played resting on the floor between the legs. In fact, “viola da gamba” is Italian translating into “viol for the leg”.

49. Mideast dough : DINARS
The Dinar is the official currency in many countries, such as Iraq and Serbia. The Gold Dinar dates back to the early days of Islam, with the name deriving from the Roman currency called “denarius” meaning “ten times” (as it was originally a coin worth ten asses).

50. William Cullen Bryant poem that begins “Yet one smile more, departing, distant sun!” : NOVEMBER
As well as being a romantic poet, William Cullen Bryant was a journalist, and for many years was the editor of the “New York Evening Post”. There is a park in New York City named in Bryant’s honor, at the intersection of 42nd Street and Sixth Avenue. Bryant was influential in the creation of another New York Park, one a little larger. That would be Central Park …

52. Like many songbirds : OSCINE
The adjective “oscine” describes birds belonging to the suborder Oscine, a group that includes most songbirds.

54. Monologue writers? : STENOS
Stenography is the process of writing in shorthand. The term comes from the Greek “steno” (narrow) and “graphe” (writing). A stenographer has to listen to “a monologue”, and record it in shorthand.

1. Literary adulteress’s surname : BOVARY
“Madame Bovary” is the most famous novel written by Gustave Flaubert. The title character is a doctor’s wife, Emma Bovary, who lives a luxurious life beyond her means, and has many adulterous affairs. The novel had a rousing reception, first being attacked by public prosecutors as obscenity, which I am sure later helped it to become a bestseller.

3. Father of Agamemnon : ATREUS
In Greek mythology, Atreus was the father of Agamemnon and Menelaus. It was Menelaus who married Helen of Troy who was abducted by Paris, and his brother Agamemnon who led the Greeks in the resulting Trojan War.

6. Meryl’s “Prime” co-star : UMA
“Prime” is a romantic comedy from 2005. It has an interesting storyline. 37-year-old divorcee (Uma Thurman) falls for 23-year-old man (Bryan Greenberg) and shares her thought about the affair with her therapist (Meryl Streep). The therapist turns out to be the 23-year-old man’s mother. Hilarity ensues, I am sure (I have yet to see this one …).

7. It’s also known as a maypop : PASSION FRUIT
Passion fruit is a vine species of passion flower. It is grown mainly for juice, although the fruit can be eaten is if is allowed to dehydrate a little to enhance the sweetness.

9. Shakespeare rebuke : ET TU
Shakespeare uses the words “Et tu, Brute” (And you, Brutus?) in his play “Julius Caesar”, but the phrase was around long before he used it. It’s not known what Julius Caesar’s actual last words were.

10. Get rough : CHAP
The verb “to chap” means “to crack”, and has been used to mean a crack in the skin since way back in the 14th century.

11. Crayfish features : TAIL FANS
Tail fan is a term used for the structure at the rear end of a bird, or a decapod crustacean such as a crab, lobster, prawn or crayfish.

15. Architect interred in Arlington National Cemetery : PIERRE L’ENFANT
Pierre L’Enfant was of course the architect responsible for the initial design and planning of the City of Washington. L’Enfant had grandiose ideas though, so many of his plans were scaled back by President Washington and Thomas Jefferson in particular. For example, L’Enfant proposed a “President’s House” that was five times the size of the White House that was eventually constructed.

23. ___ dire : VOIR
“Voir dire” comes from Anglo-Norman and is a phrase used in law. The modern word “voir” means “to see”, and is no relation to the older “voir”, which comes from the Latin “verum” meaning “that which is true”. Given that “dire” means “to say”, “voir dire” can be translated as “that which is true to say”. As such, legal use of “voir dire” is an oath to tell the truth.

29. “At once!” : STAT
The exact etymology of “stat”, used to mean “immediately” in the medical profession, seems to have been lost. It probably comes from the Latin “statim”, “to a standstill”. How that morphed into “at once”, is very unclear.

31. Island nation with a trident on its flag : BARBADOS
Now that Barbados is an independent country, by all measures it is a very developed country. Using the Human Development Index (HDI), Barbados is the third most developed country in the western hemisphere, right after the US and Canada.

32. Supporter of the North : UNIONIST
I take it this means the North in the Civil War. Back in my homeland of Ireland, the terms “North” and “Unionist” had different definitions.

33. British coin introduced in 1971 : TWO PENCE
Decimal currency was introduced in February of 1971 in the British Isles, finally putting the nail in the coffin of pounds, shillings and pence. The new currency had 100 “new” pennies to a pound, whereas the old system had 240 “old” pennies to the pound. I was working as a young teenager serving in a bar (not something you could do nowadays!) on the night the new currency “went live”. I am afraid all my customers had trouble with the math, and I made more money in tips that night than ever before …

41. English illustrator who created the “St. Trinian’s” cartoon series : SEARLE
I doubt that Ronald Searle knew what an influence his “St. Trinian’s” cartoon series would have in British culture. The first cartoon appeared in 1942, and over time depicted a school of “wild” girls, into drinking, gambling and all things wicked. The cartoon made it onto the big screen in the fifties, with a series of fun movies with a respected cast including the great Alistair Sim. There was even a “St. Trinian’s” movie released as recently as 2007, starring the likes of Colin Firth and Rupert Everett.

44. “___ Meets Godzilla” (classic 1969 cartoon) : BAMBI
“Bambi Meets Godzilla” is regarded as one of the world’s most respected cartoons. It’s just two minutes of footage, but everyone loves it apparently.

46. First son : CAIN
The story of Cain and Abel not only appears in the Bible. It also features in the Qur’an, where the brothers are named Kabil and Habil.

47. 1962 title film character played by Joseph Wiseman : DR. NO
“Dr. No” may have been the first film in the wildly successful James Bond franchise, but it was the sixth novel in the series of books penned by Ian Fleming. Fleming was inspired to write the story after reading the Fu Manchu tales by Sax Rohmer, and if you’ve read the book or seen the film, you’ll recognize the similarity in the characters.