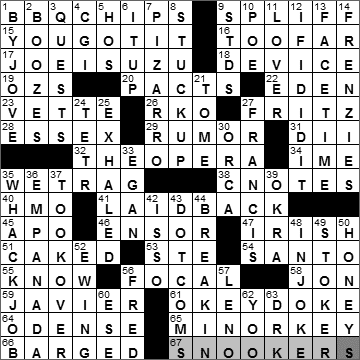 Across
9. Joint : SPLIFF
“Spliff” is another word for a cannabis joint, and is of West Indian origin.

“Joint” has a long history in the drug world. The word originally came from French in which it is the past participle of the word for “to join”. It became an Anglo-Irish term for a side-room “joined” onto a main room in the early 1800s. Towards the end of the 19th century it was US slang for a small, shady establishment, such as an opium den. By the 1930s a joint was a hypodermic needle used to inject heroin, and soon after became the term for a marijuana cigarette.

17. Pitchman who said “It has more seats than the Astrodome!” : JOE ISUZU
Joe Isuzu is a fictional spokesman who was all over television in the late eighties. He was a tongue-in-cheek character, famous for exaggerated claims and downright lying.

18. Peripheral, e.g. : DEVICE
You might have a a few peripheral devices attached to your computer, like maybe a web-cam or a printer.

19. They may be fluid: Abbr. : OZS
I find it really easy to confuse ounces and fluid ounces (as I grew up in the metric system). An ounce is a unit of mass or weight, but a fluid ounce is a measure of volume. And to make matters worse, a US fluid ounce is about 4% bigger than an imperial ounce.

22. ___ Prairie, Minn. : EDEN
The city of Eden Prairie lies just outside downtown Minneapolis. If you live there, congratulations! Eden Prairie was ranked by “Money Magazine” as the best place to live in America.

23. Sporty ride : ‘VETTE
The Chevrolet Corvette was introduced to the world in 1953, and was named after the small, maneuverable warship, the corvette. The Corvette has legs. It is the only American sports car that has been around for over 50 years.

26. Its final production was released in 1959 : RKO
The RKO Pictures studio was formed when RCA (RADIO Corporation of America) bought the KEITH-Albee-ORPHEUM theaters (and Joe Kennedy’s Film Booking Offices of America).

27. Cat of comics : FRITZ
“Fritz the Cat” was a comic strip created by Robert Crumb. Fritz was a risque character, and when he made it to the big screen in 1972, his movie actually earned an X rating, the first animated feature to be so honored.

28. One of the Home Counties : ESSEX
The Home Counties are the counties that surround the city of London, and don’t include London itself. It’s not an official designation and has been in use since the 1800s.

34. “___ Mine” (track on “Let It Be”) : I ME
“I Me Mine” is one of the relatively few Beatles songs to have been written by George Harrison (and indeed performed by him). Harrison chose the same title for his autobiography published in 1980, just a few weeks before John Lennon was assassinated in New York City.

40. Humana offering, briefly : HMO
Humana is a health insurance company based in Louisville, and is the largest company in the state of Kentucky.

41. Unlike a type A : LAID BACK
The Type A and Type B personality theory originated in the fifties. Back then, individuals were labelled as Type A in order to emphasize a perceived increased risk of heart disease. Type A personality types are so called “stress junkies”, whereas Type B types are relaxed and laid back. There doesn’t seem to be much scientific evidence to support the linkage between Type A and heart problems though.

46. “The Lamp-Lighter” painter : ENSOR
James Ensor was a Belgian painter who lived in Ostend for most of his life. His charming 1880 painting “The Lamp Lighter” also goes by the name “The Lamp Boy”.

47. ___ Spring : IRISH
Irish Spring soap was introduced in 1972 by Colgate-Palmolive. The scent used for the first twenty years was known internally within the manufacturer as “Ulster Fragrance”. I have no idea what an Ulster fragrance would be …

54. Paradigm of piety, in Pamplona : SANTO
“Santo” is the Spanish for saint.

Pamplona is famous for its San Fermin festival held in July every year, the highlight of which is the Running of the Bulls. Every year, 200-300 people are injured in the bull run, and 15 people have been killed since 1910. If you get to Pamplona two days before the running of the bulls, you can see the animal-rights protest event known as the Running of the Nudes. The protesters are as naked as the bulls …

58. English composer/pianist Lord : JON
Jon Lord is an English composer and pianist, famous for his playing of the Hammond organ. Lord was also co-founder of the rock band Deep Purple.

59. Pitcher Lopez or Vazquez : JAVIER
Javier Lopez is relief pitcher who plays for the San Francisco Giants. Javier Vazquez is a pitcher for the New York Yankees.

64. Port named for a Norse god : ODENSE
Odense is a city in Denmark, named after the Norse god Odin. One of Odense’s most famous sons was Hans Christian Anderson, the author of children’s stories.

65. Setting for half of Chopin’s 24 preludes : MINOR KEY
Frederic Chopin was a Polish composer, who spent most of his life in France. Chopin was most famous for his piano works in the Romantic style. Chopin was a sickly man, though, and died quite young at 39. For many of his final years he had a celebrated and tempestuous relationship with the French author George Sand (the nom de plume of the Baroness Dudevant). Those years with Sand may have been turbulent, but they were very productive in musical terms.

67. Flimflams : SNOOKERS
Flim-flam is another word for a confidence trick. The term has been in use since the 1500s, would you believe?

Down
1. “I swear!” : BY JOVE
By Jove is a mild oath, calling on the Roman god Jove, also known as Jupiter.

5. Noel syllables : HOS
Ho-ho-ho! Noel is the French word for the Christmas season, ultimately coming from the Latin word for “birth”, “natalis”.

7. He had Atahualpa executed : PIZARRO
Spanish conquistador Francisco Pizarro discovered the Incas in 1526, the beginning of the end for the ancient civilization, ravaged by force and by imported smallpox. The last leader of the Incas was Atahualpa. Pizarro staged a mock trial and then condemned Atahualpa to execution by burning. A Spanish friar intervened on behalf of the condemned man, as Atahualpa believed that if he was burned his soul would not go onto the afterlife. Pizarro, was kind enough to have Atahualpa garroted instead.

10. “Hop-Frog” writer : POE
“Hop-Frog” is a short story written by Edgar Allen Poe, first published in 1849. Hop-Frog is a jester in a king’s court, intent on revenge against his master and his retinue. The jester convinces the king and his inner circle to dress up as orangutans for a masquerade ball, and then sets fire to their costumes killing them all.

12. Controversial O. J. Simpson book : IF I DID IT
After having been acquitted of the murder of his wife and Ronald Goldman, O. J. Simpson wrote a book called “If I Did It”, a “hypothetical” description of the murders. Publication of the book was cancelled due to public outrage at the prospect of Simpson making money from the crime for which he was widely perceived as having committed. After Simpson was held financially liable for the murders in a civil trial, the rights to the book were transferred to the Goldman family. The Goldmans changed the book’s title to “If I Did It: Confessions of the Killer

“, and then published. The Goldman version had a cover with the word “If” in very small letters, so the title seems to read “I Did It”.

21. One with an extra-wide spine : TOME
Tome first came into English from the Latin “tomus” which means “section of a book”. The original usage in English was for a single volume in a multi-volume work. By the late 16th century “tome” had come to mean “a large book”.

27. Crick who co-discovered DNA’s structure : FRANCIS
Francis Crick and James Watson discovered that DNA was a double-helix structure, publishing their results in Cambridge in 1953. To this day the discovery is mired in controversy, as some crucial results collected by fellow researcher Rosalind Franklin were used without her permission or even knowledge.

30. Cousin of a blackfish : ORCA
The taxonomic name for the killer whale is Orcinus orca. The use of the name “orca” is becoming more and more common in English. The Latin word “Orcinus” means “belonging to Orcus”, with Orcus being the name for the Kingdom of the Dead.

33. Eddie who inspired “The French Connection” : EGAN
New York cop Eddie Egan was responsible for breaking up an organized crime ring in the city in 1961, and the seizing of a record amount of heroin (112 pounds). His exploits were chronicled in a book by Robin Moore, which in turn was the basis of the movie “The French Connection” released in 1971. Gene Hackman played Popeye Doyle in the movie, the character based on Egan. Paradoxically, when Egan retired from the police force he started acting and played small roles in 22 movies and television shows.

36. South-of-the-border snack : EMPANADA
An empanada is a dish made by folding pastry around cooked meat and vegetables, and baking it. To me it looks very similar to a dish I grew up with called a Cornish pasty.

49. Person firing a locomotive : STOKER
Did you know that the French word for “stoker” is “chauffeur”, giving us the word we use in English for the driver of a private car?

52. 1992 Dream Team member : EWING
In 1989, the International Basketball Federation changed its rule requiring amateur status for participants in the Olympic Games (although prior to the ruling, European and South American professionals could play). So the US was able to field the “Dream Team” at the 1992 Olympics in Barcelona. Since the rules changed, the US won gold in four out of the five Olympic tournaments.

56. Ebenezer Scrooge’s nephew : FRED
The classic 1843 novella “A Christmas Carol” by Charles Dickens has left us with a few famous phrases and words. Firstly, it led to popular use of the phrase “Merry Christmas”, and secondly it gave us the word “scrooge” meaning a miserly person. And everyone knows that Scrooge uttered the words “Bah! Humbug!”.

In “A Christmas Carol”, Scrooge’s nephew, Fred, is the son of his deceased sister. Fred is a pauper, but a cheerful man. Fred invites his uncle to spend Christmas with him and his wife, but Scrooge refuses. It’s only after being visited by the three ghosts of Christmas that Scrooge relents and turns up at Fred’s home, and has a fine old time!

57. Noted reader of headlines : LENO
Jay Leno is a car fanatic, and owns about 200 vehicles of various types. You can check them out on his website!

63. Nickname for Dwight Gooden : DR. K
Dwight Gooden is a former professional baseball pitcher, with the nickname “Dr. K”. Sadly, Gooden’s life has been plagued by drug and alcohol problems, and those problems have continued even since his retirement from baseball in 2001.