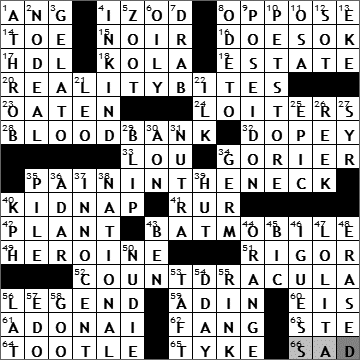 1. Director Lee : ANG
Taiwanese director Ang Lee sure has directed a mixed bag of films, mixed in terms of genre, not in terms of quality. He was at the helm for such classics as “Sense and Sensibility” (my personal favorite), “Crouching Tiger, Hidden Dragon”, “Hulk”, and “Brokeback Mountain”.

4. Big name in sport shirts : IZOD
Jack Izod was a tailor of some repute over in England, producing shirts for King George V as well as other members of the royal family. As he was about to retire, he was approached for the use of his name by an American clothing manufacturer based in New York. The brand Izod of London was introduced to America in 1938.

15. Film style : NOIR
The term “film noir” has French origins, but only in that it was “created” by a French critic in describing a style of Hollywood film. The term, meaning “black film” in French, was first used by Nino Frank in 1946. Film noir often applies to a movie with a private eye or detective at its center, with a melodramatic plot. Good examples would be “The Big Sleep” and “D.O.A”.

17. Cholesterol abbr. : HDL
HDL (high-density lipoprotein) is a compound that is used to transport fats around the body. When HDL is combined with (is transporting) cholesterol, it is often called “good cholesterol”. This is because HDL seems to remove cholesterol from where it should not be, say on the wall of arteries, and transports it to the liver for re-use or disposal. Important stuff …

18. Nut with caffeine : KOLA
The nut of the kola tree has a bitter taste, and is loaded with caffeine. So, despite the taste, the nut is habitually chewed in some cultures, especially in West Africa where the tree is commonly found in the rainforest. Of course in the US we best know the kola nut as a flavoring used in cola drinks.

20. Comment on life by 52-Across? : REALITY BITES
The 1994 movie “Reality Bites” was the first film to be directed by Ben Stiller. Like many low-budget movies, things moved pretty quickly during shooting and it was filmed in just 42 days, on location in Austin and Houston, Texas.

28. Deposit and withdrawal site for 52-Across? : BLOOD BANK
Prior to 1915, blood transfusions were carried out directly, from a vein of the donor, into a vein of the recipient. All that changed pretty quickly when it was discovered that sodium citrate could be added to blood to stop it coagulating. Soon, it was clear that refrigerated blood treated with an anti-coagulant could be stored, and blood “depots” were created in Britain during WWI. The term “blood bank” was first used in 1937, to describe the store of blood kept in the Cook County Hospital in Chicago.

33. Musical Reed : LOU
Lou Reed is best known as a rock musician and songwriter, especially due to his fabulous 1973 hit “Walk on the Wildside”. Reed is less well known as a photographer, but he has published two collections of his work. The first was released in 2003 under the title “Emotions in Action

35. Result of an encounter with 52-Across? : PAIN IN THE NECK
Vampire bats feed mostly in the blood of mammals, including humans. When they find a suitable “victim”, often one that is asleep, the bat usually lands close by and approaches its “meal” on the ground. It makes a small cut with its razor-sharp teeth and laps up the blood. The blood tends to flow freely as the bat’s saliva contains anti-coagulants. Reports of bats biting the neck of humans are very rare in the real world, but it is the preferred location if attack in the fantasy world of vampires.

41. Capek play : R.U.R.
R.U.R. is a play written in Czech by Karel Capek and first produced in 1921. It is a science fiction work, and is remarkable in that it introduced the world to the word “robot”. The words “automaton” and “android” were already in use, but Capek introduced the term “robot” from the original Czech “robota” meaning “forced labor”.

43. Crib plaything for a young 52-Across? : BATMOBILE
The Batmobile was first introduced in the world of comic books in 1939. It started out as a simple, red convertible, with nothing special to recommend it. Over the years though, the car evolved and became more and more sophisticated. The Batmobile always had pride of place in the Batman tales, but once in a while Batman would take the Batplane, Batboat and Batcycle out for a spin.

49. Buffy the Vampire Slayer, e.g. : HEROINE
Joss Whedon was pretty pleased when he managed to get his script for “Buffy the Vampire Slayer” made into a movie in 1992, but the film pretty much bombed. Five years later he was able to get it adapted for television, and it developed a cult following that kept it alive on the small screen from 1997-2003.

52. See 20-, 28-, 35- and 43-Across : COUNT DRACULA
“Dracula” is a novel written by an Irish author, Bram Stoker, and first published in 1897. Dracula wasn’t the first vampire of literature, but he certainly was the one who spawned the popularity of vampires in theater, film and television, and indeed more novels. Personally, I can’t stand vampire fiction …

59. Deuce follower : AD IN
In tennis, “ad in” is an informal way of saying “advantage” when announcing the score.

61. Hebrew name for God : ADONAI
Adonai is one of the Hebrew names for God, and translates as “master”.

63. ___-Foy, Que. : STE
Sainte-Foy was a city in its own right, but as of 2002 it is a neighborhood in Quebec City. Sainte-Foy is an important part of the larger city, partly because it is home to the area’s main airport, Jean Lesage International.

64. Pied Piper’s sound : TOOTLE
The legend of the Pied Piper of Hamelin dates back to medieval times. Recently there have been suggestions that the story is rooted in some truth, that the town of Hamelin did in fact lose many of its children, perhaps to plague. The suggestion is that the tale is an allegory.

65. Nipper : TYKE
“Tyke” has been used playfully to describe a young child since at least 1902, but for centuries before that a tyke was a cur or mongrel, and perhaps a lazy or lower-class man.

Down
3. Frozen treat : GELATO
Gelato is the Italian version of American ice cream, differing in that it has a lower butterfat content.

5. ___-suiter : ZOOT
A zoot suit has pants that are fairly loose fitting, except around the cuff at the bottom of the leg. The pants also have a high waist. The jacket of the suit has wide lapels and wide, padded shoulders. Zoot-suits were popular in the US in the thirties and forties, and often associated with the African American, Latino American and Italian American ethnic groups. Over in the UK, the zoot suit was worn by the “Teddy boys” of the fifties and sixties. “Zoot” is probably just a slang iteration of the word “suit”.

7. Void of any va-va-voom : DRAB
I think “va va voom” has been around for a while, but it was popularized in Europe in an ad for the Renault Cleo featuring the French soccer star Thierry Henry.

9. Ill-fated ship of film : POSEIDON
The 1972 movie “The Poseidon Adventure” was based on a novel of the same name by Paul Gallico, first published three years before release of the film. “The Poseidon Adventure” was a huge commercial success in 1972, earning more than twice as much money as the second most successful movie of the year, “Deliverance”.

12. Bar fixture, maybe : SOT
Our word “sot” comes from the Old English words “sott”, meaning a fool. The word “sot” started to be associated with alcohol, and not just foolery, in the late 1500s.

13. Squeeze (out) : EKE
I believe that technically speaking one can’t actually “eke out” an existence, as to “eke out” means to “make something go further or last longer”. So, you can eke out your income by cutting back on expenses, but you can’t eke out your existence, or any existence.

30. ___ Center (Chicago skyscraper) : AON
The Aon Center is the third tallest building in Chicago, after the Willis Tower (formerly the Sears Tower) and the Trump International Hotel and Tower. When the Aon Tower was opened in 1973 it was the new headquarters of the Standard Oil Company. As the tallest building in the city at the time, it was nicknamed “Big Stan”.

31. Commercial lead-in to Sweet : NUTRA
NutraSweet is a brand name for the artificial sweetener aspartame. Aspartame was discovered by a chemist working for Searle in 1965, but it took 15 years for the company to be granted approval for its sale. I wonder why …???

36. Month before Nisan : ADAR
Adar is a month in the Hebrew calendar.

39. QB’s utterance : HUT
The quarterback starts each play in football with a “snap”. The quarterback announces to he is teammates the exact moment of the snap by calling out signals, usually including the word “hut”, one or more times in a prearranged sequence.

40. Speed meas. in Europe : KPH
Kilometres Per Hour (“kilometres” and not “kilometers”, seeing as we are talking about Europe!).

43. Big ___ : BEN
As most people know these days, Big Ben is the nickname for the large bell in the Clock Tower of the Palace of Westminster (aka the Houses of Parliament). Big Ben’s official name is the Great Bell, and there is some debate about the origins of the nickname. It may be named after Sir Benjamin Hall who oversaw the bell’s installation, or perhaps the English heavyweight champion of the day, Benjamin Caunt.

44. Popsicle choice : ORANGE
The term ice pop has been supplanted in the US by “popsicle”, as the Popsicle brand of ice pop became so popular. We still use “ice pop” in Ireland, and in the UK the same thing is called an “ice lolly”, and in Australia it’s an “ice block”.

45. Pen with a cap : BIC
Societe Bic is a French company, based in Clichy in France. The first product the company produced more than fifty years ago was the Bic Crystal, what we now call the Bic pen.

47. 1955 novel that was made into 1962 and 1997 films : LOLITA
Vladimir Nabokov’s novel “Lolita” has a famously controversial storyline, dealing with a middle-aged man’s obsession and sexual relationship with a 12-year-old girl. Although “Lolita” is considered a classic today, after Nabokov finished it in 1953 the edgy subject matter made it impossible for him to find a publisher in the US (where Nabokov lived). In 1955, he resorted to publishing it in English at a printing house in Paris. Publication was followed by bans and seizures all over Europe. A US printing house finally took on the project in 1958, by which time the title had such a reputation that it sold very quickly. It became the first book since “Gone with the Wind” to sell over 100,00 copies in the first three weeks in the stores.

53. 1920s chief justice : TAFT
William Howard Taft may have been the 27th President of the United States, but his lifelong ambition was to be Chief Justice of the Supreme Court. President Taft was able to realize that dream in 1921, eight years after losing his bid for re-election as president. As Chief Justice, this former US President swore in two new presidents, Calvin Coolidge (in 1925) and Herbert Hoover (in 1929).

The most famous D-Day in history was June 6, 1944, the date of the Normandy landings in WWII. The term “D-Day” is used in the military to designate the day in which a combat operation is to be launched, especially when the actual date has yet to be determined. What D stands for seems to have been lost in the mists of time, although the tradition is that it just stands for “Day”. In fact, the French have a similar term “Jour J” (Day J), with a similar meaning. We also use H-Hour to denote the hour the attack is to commence.

57. Tokyo, once : EDO
Edo is the former name of the Japanese capital city of Tokyo. Edo was the seat of the Tokugawa shogunate, a feudal regime that ruled from 1603 until 1868.