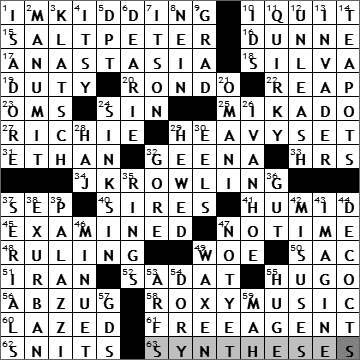 Across
15. Gunpowder ingredient : SALTPETER
The chemical name for saltpeter is potassium nitrate. The exact origin of the name “saltpeter” isn’t clear, but it may have come from the Latin “sal petrae” meaning “stone salt”. The main use for potassium nitrate is as a fertilizer, a source of potassium and nitrogen. As it is a powerful oxidizing agent, it is also used in amateur rocket propellants. Anyone who has ignited one of those “engines” would have noticed the lilac-colored flame, indicating the presence of potassium.

16. “A Season in Purgatory” novelist Dominick : DUNNE
Dominick Dunne was a writer and investigative journalist. One of his more cathartic works must have been an article he wrote for “Vanity Fair” titled “Justice: A Father’s Account of the Trial of his Daughter’s Killer”. Dunne wrote this after attending the trial of John Sweeney, the one-time boyfriend of his daughter Dominique, whom Sweeney strangled in 1982. Dominique was an actress, and had just finished filming “Poltergeist” when she was murdered.

17. Romanov family member : ANASTASIA
The last ruler of Imperial Russia was Tsar Nicholas II. Famously, the Tsar and his family were murdered in the basement of a house in Yekaterinburg, Russia by members of the Bolshevik secret police in 1918. The Tsar’s youngest daughter was 16-year-old Anastasia, and although it is certain that she died with her family, rumors of her escape have persisted for years. The rumors grew with the help of numerous women who claimed to be Anastasia, but DNA testing has proven that all claims were false. In 2009, DNA testing finally proved that the remains of all of the Tsar’s immediate family have been found and identified.

20. Repetitive composition : RONDO
A rondo was often chosen by composers for the last movement of a sonata (or symphony or concerto, for that matter). In rondo form there is a principal theme that alternates with a contrasting theme(s), with the original theme anchoring the whole piece in between secondary digressions.

23. Chorus heard at some retreats : OMS
Om is a sacred, mystic word from the Hindu tradition. It is sometimes used as a mantra, a focus for the mind in meditation.

25. Old Asian title : MIKADO
An old term used for the Emperor of Japan was “mikado”, which literally translates to “the Gate”. The concept was that the emperor “owned” the gate of the Imperial Palace, and everything behind those gates.

27. Havens for folkies? : RICHIE
Richie Havens is a folk singer and guitarist. One of Havens’s claims to fame is that he was the opening act at the first Woodstock festival in 1969.

31. Brand written about by Hawthorne : ETHAN
Nathaniel Hawthorne wrote the short story “Ethan Brand – A Chapter from an Abortive Romance”, in 1850.

32. Davis of Hollywood : GEENA
As well as being a successful Hollywood actress, Geena Davis is an accomplished archer, and came close to qualifying for the US archery team for the 2000 Summer Olympics. She is also a member of American Mensa. She is quite the lady …

34. Creator of the currency system consisting of galleons, sickles and knuts : J. K. ROWLING
J. K. Rowling is the author of the amazingly successful Harry Potter series of books. Rowling wrote the first book when she was living on welfare in Edinburgh in Scotland, and in longhand. She would often write in local cafes, largely because she needed to get her baby daughter out of the house (she was a single mom), and the youngster would tend to fall asleep on walks. Within five years, the single mom on welfare became a very rich woman, and is now worth about $1 billion! That’s a lot of knuts …

50. Corporeal case : SAC
“Sac” is the word for a “pocket” in biological terms. The word comes from the Latin “saccus” meaning “bag”.

52. Begin’s partner : SADAT
Anwar Sadat was the third President of Egypt (succeeding President Nasser), right up to the time of his assassination in 1981. He won the Nobel Peace Prize in 1978 along with Israeli Prime Minister Menachem Begin, for their role in crafting the Israel-Egypt Peace Treaty of 1978 at Camp David. It was this agreement that largely led to Sadat’s assassination two years later.

56. Congressional feminist of note : ABZUG
Bella Abzug was one of the leader’s of the Women’s Movement that founded the National Women’s Political Caucus in 1971. She was elected to the US Congress the same year, helped by a famous campaign slogan “This woman’s place is in the House – the House of Representatives”.

58. “Avalon” band : ROXY MUSIC
“Avalon” was the last studio album released by Roxy Music, in 1982. Roxy Music was led by Bryan Ferry, and is also famous for giving Brian Eno his start in music.

61. Court star being courted? : FREE AGENT
In sports, a free agent is a player whose contract has lapsed with a team, and who is free to sign with another team.

2. Let go : MANUMIT
Manumission is the freeing of a slave by his or her owner. In the days of slavery in the US, manumission was sometimes a clause in a slave owner’s will, so freedom was often granted at the demise of the owner. The concept of manumission dates back to Ancient Greece and Rome. The term comes from Latin, derived from “letting go of from the hand”.

3. Gabbers’ gathering : KLATSCH
A “klatch” (also “klatsch”) is a casual gathering, particularly for conversation. “Klatch” comes from the German “klatschen” meaning “to gossip”.

5. Vaccine combo : DPT
DPT is a combination of vaccines for humans, that is effective in the prevention of three infectious diseases: Diphtheria, Pertussis (whooping cough) and Tetanus.

8. Cologne contradiction : NEIN
“Nein” is the German for “no”.

Cologne is the fourth largest city in Germany, and is called Koln in Germany.

9. Former Lenin adherent? : GRAD
What a devious clue! “Grad” used to “adhere” to “Lenin”, when St. Petersburg was known as Leningrad. St. Petersburg, simply a beautiful city to visit, was renamed Petrograd in 1914, Leningrad in 1924, and back to St. Petersburg in 1991.

13. Saxon or Celt, once : INVADER
The Saxons were a group of Germanic tribes, whose descendants today are the modern-day German, Dutch and English peoples. The Saxons invaded Britain in the fifth century AD, and have been there ever since!

The Celts were a very broad group of people across Europe, linked by common languages. The Celtic identity has largely been absorbed by other cultures, although a relatively modern revival of the “Celtic identity” is alive and well in the British Isles. Such Celtic peoples today are mainly found in Ireland, Scotland, Wales.

21. Certain Bedouin : OMANI
Bedouin tribes are Arab ethnic groups that predominately live in the Middle East, in desert areas. Bedouin tribes tend to be nomadic, not settling permanently in one location.

28. Once-in-a-lifetime trip, for some : HAJ
A Haji is the term used for someone who has made a pilgrimage to Mecca, and it is sometimes also used as a form of address for such a person. The journey itself goes by the name “haj”.

32. Stick : GORE
To gore is to pierce or stick with a horn or tusk.

35. Equipment near a horse : RINGS
In the world of gymnastics, a vaulting horse might be located near the rings.

38. Almost in the sticks : EXURBAN
As an extension to the term “suburb”, an “exurb” is an area beyond the suburbs at the very outskirts of a city. Often the term exurb is used to denote an area inhabited by more wealthy people.

39. Grand Canal sights : PALAZZI
The Grand Canal is one of the major waterways in the city of Venice, traversing the city in a broad S-shape.

The Italian word “palazzo” can be used to describe a palace, but it is also used more broadly to describe a grand house, a headquarters or even an apartment building.

43. 1970s peace anthem : IMAGINE
John Lennon’s magnus opus is his song “Imagine”, released in 1971. “Imagine” was quite successful at the time of its release, but sadly, it only became a number one hit when Lennon was murdered in 1980. According to Lennon, the message behind the song is very simple: a world without countries or religion would be a peaceful place.

44. Concentrates, in a way : DECOCTS
To decoct, is to extract the flavor of a liquid by boiling down and increasing the concentration. A related term is “concoct”, meaning “to boil together”.

46. It often includes a trio : MINUET
A minuet is a dance that originated in France. At some point, the middle section of the minuet was routinely scored for just a trio of instruments. The resulting composition was known as a minuet and trio, and in the Classical Era was commonly chosen as the third movement of a symphony.

54. Small fishing vessel : DORY
A dory is a small boat, around 20 feet long, with a shallow draft, a flat bottom and a sharp bow. Dories are commonly used for fishing.