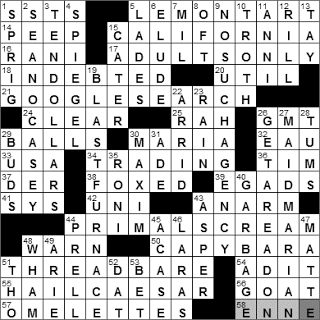 15. Orange’s place : CALIFORNIA
Although there is a city of Orange in California, it resides in the more famous county of the same name, Orange County. Orange County is home to famous destinations like Disneyland and Knott’s Berry Farm, perhaps accessed via John Wayne Airport (also known as Orange County Airport).

16. Eastern dignitary : RANI
A Ranee (also spelled Rani) is the female equivalent of a Raja in India.

20. Monthly expense: Abbr. : UTIL
Utilities are a monthly expense (although a much smaller one these days for my pal, who put solar panels on his roof a few months ago).

” was originally called “BackRub” would you believe? The name was eventually changed to Google, an intentional misspelling of the word “googol”. A googol is a pretty big number, 10 to the power of 100. That would be the digit 1 followed by 100 zeros.

26. Prime meridian hrs. : GMT
Greenwich Mean Time is the time at the Prime Meridian, that runs through Greenwich in London.

30. She’s a problem that needs to be solved, in song : MARIA
The Rodgers and Hammerstein musical “The Sound of Music” features a famous song called “Maria”, or more commonly “How Do You Solve a Problem Like Maria?” It’s sung by nuns who are exasperated by the lively and vivacious novice, Maria. Andrew Lloyd Webber produced a revival of “The Sound of Music” for the London West End in 2006, and he came up with a novel way of finding someone to play “Maria”. He chaired a reality television show called “How Do You Solve a Problem Like Maria?”, a competition to find an unknown singer to play the lead role. The TV show was so successful, Canadian TV aired their version two years later, and found a lead for the 2008 production of the musical in Toronto.

33. Its members are represented by stars : USA
Here’s my favorite story about the stars on the American flag …

that would be needed when Alaska and Hawaii would join the Union. Most of the designs submitted were with 50 stars, as the assumption was the 49-star flag would not be needed for long, if at all. 17-year-old Robert Heft submitted a 49-star design to his teacher for a school project, earning him a B-minus grade. Heft complained about the B-minus and was jokingly told that his grade would only be reconsidered if the design was accepted by congress. I guess Robert received his A because his flag flew from January 1959 when Alaska joined the union, until August when Hawaii became the 50th state. How cool is that?

36. Style guru Gunn : TIM
Tim Gunn is a fashion consultant, and these days a television personality as well. He makes regular appearances on the reality TV show “Project Runway”, and is so popular a character that he now has his own show, “Tim Gunn’s Guide in Style”.

37. With 4-Down, German equivalent of Time : DER
4. See 37-Across : SPIEGEL
“Der Spiegel” is a very successful German magazine found on news-stands all over Europe. The name “Der Spiegel” translates from German into “the Mirror”.

39. Cry of consternation : EGADS
Egad was developed as a polite way of saying “oh God” in the late 1600s, and is an expression of fear or surprise, as is, “Good grief!”.

41. Part of Awacs: Abbr. : SYS
When the British developed radar in WWII, they also came up with an airborne system which they deployed. In 1944 the US Navy commissioned a similar system, and so launched the first American Airborne Early Warning (AEW) system before the war was over. The more modern term for used for today’s aircraft is Airborne Warning and Control System, AWACS

42. Cellular opening? : UNI
Cellular, with a “uni” opening is “unicellular”, having one cell.

44. Supposed aid in curing neurosis : PRIMAL SCREAM
Psychologist Arthur Janov argues that a successful treatment of mental illness is to express repressed childhood pain. It’s a controversial technique he calls “primal therapy”. He describes the whole thing in his first book, published in the seventies, called “The Primal Scream

48. Show a yellow card, e.g. : WARN
A series of colored penalty cards is used by referees and umpires in many sports, most notably in soccer. The cards were first used in the 1970 FIFA World Cup in Mexico, after language difficulties created confusion during the prior competition in 1966. The main cards used are a yellow card indicating a caution, and a red card indicating expulsion from the game.

50. Rodent that may weigh over 100 pounds : CAPYBARA
The capybara

is the largest rodent in the world, a native of South America. This huge animal is related to the tiny little guinea pig, a remarkable relationship given that a fully grown adult capybara can be over four feet long, and weigh up to 140 pounds.

54. Shaft entrance : ADIT
An adit is specific type of mine access, a horizontal shaft that extends into the mine. This can be compared with the more traditional vertical shaft that is used for access into most mines. Adits make sense when the ore is located inside a mountain or hill, as opposed to “underground”,  so that the mine entrance can be on the valley floor.

56. Chimera, in part : GOAT
In Greek mythology, a chimera was a female monster with the body of a lioness, a tail that ended in a snake’s head, and the head of a goat that emanated from the lioness’s spine. The term chimera has entered into our modern language, meaning a fanciful illusion or fabrication.

57. Fare often folded in half : OMELETTES
I know my Lookups can sound like one long advertisement sometimes, but regardless I have to mention the movie “Julie & Julia”, a great twist on a biopic, featuring the life of Julia Child, It is hilarious, charming and fascinating, all in one. Meryl Streep, who plays Julia Child, was never a favorite of mine but she has won me over to her corner with her latest films. Oh, and the omelet reference is because I saw Julia Child on TV the other night cooking dozens of omelets, each taking 20 seconds (!) in the pan.

58. -trix kin : ENNE
“-trix” and “enne” are both suffixes that indicate the feminine form of a noun.

Down
2. Irish playwright who wrote “Cock-a-Doodle Dandy” : SEAN O’CASEY
“Cock-a-Doodle Dandy” is regarded by many as the finest work of Irish playwright Sean O’Casey. It’s a fantasy piece, with a magic cockerel turning up in a rural Irish village. The cockerel forces the locals to stand up and be counted, making fundamental choices for themselves. The play was was banned in some locations, for being anti-catholic.

3. Value of a U.S. coronet head coin, minted from 1838 to 1907 : TEN DOLLARS
The US mint issued ten-dollar coins with a coronet design from 1838 to 1907. The coronet was a small crown that was worn by Lady Liberty, whose head appeared on one side of the coin. On the reverse side was an American eagle, which gave the coin its nickname, an “eagle”.

5. Takes on cargo : LADES
The verb “lade” meaning “to load” comes from an Old English word “hladan”. Lade also used to mean “to draw water”, and gave us our word “ladle”. So, lade and ladle, are close cousins.

8. With regularity, to Whitman : OFT
Walt Whitman is considered to be one of the greatest American poets, born in 1819 on Long Island, and living through the American Civil War. He was a controversial character, even during his own lifetime. One view held by him was that the works attributed to William Shakespeare were not actually written by Shakespeare, but rather by someone else, or perhaps a group of people.

9. Organization nickname that plays off the group’s secrecy : NO SUCH AGENCY
No Such Agency is a great nickname for the NSA, don’t you think?

The National Security Agency was set up in 1952 by President Truman, a replacement for the Armed Forces Security Agency that had existed in the Department of Defense since 1949. The agency has always been clouded in secrecy. Even the 1952 letter from President Truman that set up the agency was kept under wraps from the public for over a generation.

10. Loyalty : TROTH
There’s a phrase used in some traditional wedding vows that goes “… and thereto I plight thee my troth”. “I plight” is an obsolete way of saying “I pledge”. “Troth” is an old variant of the word truth, and meant just that, “truth” but also “loyalty”. So, “I plight thee my troth” means, “I promise to be loyal to you”. I am sure all of us who uttered those words knew what we were saying …

11. Millennio divisions : ANNI
In Italian, a millennium (millennio) is divided into years (anni).

12. Streamlet : RILL
Rill, meaning a small brook or rivulet, has German roots, the same roots as “Rhine”, the name of the major European river.

19. Coke product maker : BLAST FURNACE
Although the term “blast furnace” is usually reserved for furnaces producing metals from ores, generically a blast furnace is one in which fuel is fed in from the top, and air is blown in from the bottom.

Blast furnaces often use coke as a fuel. Coke is coal that has been baked at very high temperatures to drive off volatile constituents such as water, coal-gas and coal tar. The resulting coke looks like coal, but is grey, porous and much lighter.

is an antiperspirant deodorant brand, introduced in the thirties. Slogans associated with Arrid have been “Don’t be half-safe – use Arrid to be sure”, “Stress stinks! Arrid works!” and “Get a little closer”.

27. Legendary outlaw’s companion : MAID MARIAN
Robin Hood is a figure from English folklore, celebrated in story and song. Some stories suggest that Robin Hood the outlaw was actually a real nobleman, the Earl of Huntington. Robin Hood’s famous companion was Maid Marian. Interestingly, the legend of Maid Marian (full name Lady Marian of Leaford) had been around for centuries before she became associated with Robin Hood starting in the 1700s.

28. Product of some relief pitches? : TUMS
The main ingredient in Tums

antacid, made by GlaxoSmithKline, is calcium carbonate. It has been on the market since 1930. If you want to save a few pennies, Target brand antacid is identical to Tums, so I hear …

30. Words to live by : MAXIM
Our word “maxim” meaning “precept, principle” has been around since the early 1600s. It ultimately derives from the Latin phrase “maxima popositio”, literally “greatest premise”.

is one of those sports drinks, the only real competitor to Gatorade. Pepsi makes Gatorade, so in 1988, Coke introduced Powerade. I really do question the value of these hyped up beverages …

was introduced in 1958 by the Golden Grain Macaroni Company of San Francisco. The company was run by an Italian immigrant and his four sons. The wife of one of the sons served a pilaf dish at a family diner that was a big hit, so her brother-in-law created a commercial version by blending dry chicken soup mix with rice and macaroni. Sounds like “a San Francisco treat” to me …

40. What’s at your disposal? : GARBAGE
When I think of things I would describe as “American”, a garbage disposal comes to mind. They’re all over this country, and yet rarely found elsewhere. I hardly ever use ours, although my American wife does of course. I think I have spent more time unclogging ours, and repairing it, than I have using it as a disposal unit.

was introduced by Proctor & Gamble in 1947, and was originally a clear, green concentrate sold in a tube (like toothpaste).

47. Certain finish : MATTE
What’s the relationship between “matte” and alcohol? Well, “matte” meaning flat and lusterless, comes from the Old French word “mat” meaning beaten down and withered, which in turn comes from the Latin “maddus”, the word for being “maudlin with drink”. Sometimes I wonder about these derivations …