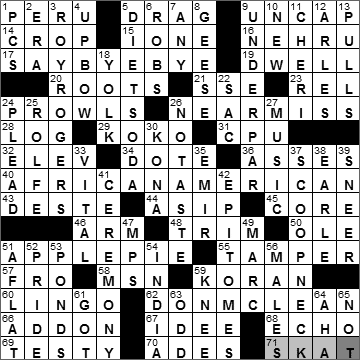 Across
1. Andean land : PERU
Peru’s name comes from the word “Biru”. Back in the early 1500s, Biru was a ruler living near the Bay of San Miguel in Panama. The territory over which Biru ruled was the furthest land south on the continent known to Europeans at that time. The Spanish conquistador Francisco Pizarro was the first European to move south of Biru’s empire, and the land that he found was designated Peru, a derivative of Biru.

5. Race for hot rods : DRAG
Back in the 18th century, “drag” was slang for a wagon or buggy, as it was “dragged” along by a horse or horses. In the underworld in the 1930s, “drag” was adopted a slang for an automobile. This sense of “drag” was imported into automobile racing in the forties, giving the name to “drag racing”. A drag race is basically a competition between two cars to determine which can accelerate faster from a standstill.

is a wonderful piece of software used for editing graphics. When I first bought it, it was really expensive (about $300,  ten years ago), but now there are cost-effective, stripped-down versions available.

To crop an image is to cut it down from its original size, usually with the intention of improving the image’s composition.

15. Actress Skye : IONE
Ione Skye is an American actress, born in Hertfordshire in England. She is best known for portraying the character Diane Court in the movie “Say Anything …” She is the daughter of the Scottish folk singer Donovan.

‘s father was Jawaharlai Nehru, Prime Minister of India (and the Nehru of the Nehru Jacket). Indira herself became Prime Minister in 1966. She was assassinated in 1984 by two of her own bodyguards, as she was walking to meet Peter Ustinov who was to interview her for Irish television.

26. Failure by a narrow margin : NEAR MISS

28. Captain’s record : LOG
The word “logbook” dates back to the days when the captain kept a daily record of the ship’s speed, progress etc. using a “log”. A log was a wooden float on a knotted line that was dropped overboard to measure the vessel’s speed.

is a female Lowland Gorilla that lives in Woodside, California. The researcher Penny Patterson, taught Koko to speak a modified form of American Sign Language (ASL) that she called Gorilla Sign Language. Koko can apparently use over a thousand signs.

31. “Brain” of a computer, briefly : CPU
The Central Processing Unit is the main component on the “motherboard” of a computer. The CPU is the part of the computer that carries out most of the functions required by a program. Nowadays you can get CPUs in everything from cars to telephones.

32. Topographic map notation: Abbr. : ELEV
The word “topography” comes from the Greek “topographos” meaning “describing a place”. Topographic maps were originally the output of surveys prepared by the military, showing natural and man-made features (including elevation). These maps were of great importance in planning battles and defensive positions. Nowadays, the important thing on a topographical map is the elevation of landforms, represented by contour lines.

43. Villa ___ : D’ESTE
The Villa d’Este is a beautiful villa close to Tivoli near Rome, Italy.

50. Flamenco cry : OLE
Flamenco is a style of Spanish music and dance. The origin of the word “flamenco” isn’t clearly understood, but the explanation that seems most credible to me is that it comes from Flanders in Northern Europe. Given that “flamenco” is the Spanish word for “Flemish”, and Flanders being the home of the Flemish people, it makes perfect sense doesn’t it?

51. It’s often ordered à la mode : APPLE PIE
In French, à la mode simply means “fashionable”. In America it has come to describe a way of serving pie, usually with ice cream, or as I recall when I lived in Upstate New York, with cheese.

59. Book of divine guidance : KORAN
The Koran is also known as the Qur’an

in English, the transliteration of the Arabic name for the holy text of the Muslim faith. The literal translation of “Koran” is “the recitation”.

60. Argot : LINGO
“Argot” is a French term, the name given in the 17th century to “the jargon of the Paris underworld”. Nowadays argot is the set of idioms used by any particular group, the “lingo” of that group.

“Lingo” came into English in the 17th century, meaning back then “foreign speech”. It probably was a shortened version of “lingua franca”, a medium of communication between people who have differing native languages. The modern usage of “lingo” is the particular language used by an identified group.

62. Singer of the lyric formed by the ends of the answers to the four italicized clues : DON MCLEAN
Don McLean

“, back in 1971. Despite the song’s iconic position in the pop repertoire, McLean has been remarkably reticent about its origins and the meaning of the lyrics. We do know that it was inspired by the death of Buddy Holly

in a plane crash (“the day the music died”). McLean has also told us that he first read about the death of his idol when delivering newspapers the day after the crash (“February made me shiver/with every paper I’d deliver”). Although the lyrics have been analyzed and interpreted by many, McLean’s stance remains that it is just a poem set to music …

67. French brainchild : IDEE
Idee is the French word for “idea”.

71. Card game popular in Germany : SKAT
When I was a teenager in Ireland, I had a friend with a German father. The father taught us the game of Skat, and what a great game it is. It originated in Germany in the 1800s and is to this day the most popular game in the country. I haven’t played it in decades, but would love to play it again …

(ERA) was written by the American suffragist leader, Alice Paul. Although Paul was successful in her campaign to get passage of the 19th Amendment to the US Constitution (guaranteeing voting rights, regardless of sex), her 1923 Equal Rights Amendment didn’t make it to the Senate floor until 1972. The amendment was passed by the Senate, and then headed to the state legislatures for the required ratification. 38 states had to approve the legislation for the amendment to be adopted, but only 35 states voted in favor before the deadline. So, the amendment is still pending, although about half of the fifty states have adopted the ERA into their state constitutions.

‘ real name was Leonard Franklin Slye. His nickname was “King of the Cowboys”. Roy Rogers married Dale Evans in 1947. Dale’s nickname was “Queen of the West”.

is in the category of “diet soda”, the marketing folks at Coca-Cola don’t like its association with the word “diet”. The target market for the beverage is young, adult males, so it is described as “calorie-free” rather than “diet”, the assumption being that males associate “diet” with women. Not in this house …

8. Fliers in V’s : GEESE
Apparently geese fly in that V-formation for a couple of reasons. One is that it makes for efficient flight and conserves energy. The leading bird gets no advantage, but every following bird gets to “slipstream” a little. It has been noted that the lead bird drops to the back of the formation when he/she gets fatigued. It’s also thought that the flock can stick together more easily when in formation, so it is more difficult to lose someone along the way.

12. Van Gogh locale : ARLES
I had the privilege to live a short car-ride from the beautiful city of Arles in the South of France. Although it has a long and colorful history, the Romans had a tremendous influence over the city’s design. It has a spectacular Roman amphitheater, arch, circus as well as old walls that surround the center of the city. In more modern times, it was a place that Vincent van Gogh often visited, and where he painted his famous “Cafe Terrace at Night

“, as well as “Bedroom in Arles

25. Husband of Pocahontas : ROLFE
John Rolfe was one of the early English settlers in American, perhaps most famous for marrying the Native American Pocahontas, son of Chief Powhatan. For a few months before her death, Pocahontas lived with Rolfe in England. The couple had actually boarded a ship sailing for Virginia when Pocahontas became ill and had to be brought ashore on the south coast of England, where she soon passed away.

is cultivated on the Big Island of Hawaii, on the slopes of Mauna Loa and Hualalai, two of the five active volcanoes on the island. Coffee plants were brought to Kona in 1828, and late in the 19th century it became a viable and worthwhile crop, and today Kona is a one of the most expensive and popular coffees in the world.

35. Mideast noble : EMIR
In English, emir can also be written as amir and ameer (watch out for those spellings in crosswords!).

38. Hall-of-Famer Combs who played with Gehrig and Ruth : EARLE
Earle Combs was a professional baseball player who played for the New York Yankees from 1924 to 1935, his whole playing career. Combs had the reputation of being a real gentleman and was nicknamed “the Kentucky Colonel”. He was such a gentleman that he was described as the favorite Yankee of the sports writers. That would be quite an honor given that his teammates included Babe Ruth and Lou Gehrig.

series. He is a fellow student, the one who sneers a lot.

41. The Changing of the Guard, e.g. : CEREMONY
The Queen’s guard (the Queen being the sovereign of the UK) is the infantry unit responsible for guarding the royal residences in London. In theory, any infantry unit of the British commonwealth can perform the duty, but most often the service is provided by the Grenadier Guards, the Coldstream Guards, the Scots Guards, the Irish Guards or the Welsh Guards. The guard units are usually assigned for a month at a time, with as many as five units being “on call” in any one month. The particular guard unit on duty at Buckingham Palace is changed every day at 11 a.m. in a very colorful and public ceremony known as “the changing of the guard”, a major tourist attraction in London.

42. Abstracts : EPITOMES
The more common meaning of “epitome” is a perfect example of a group, quality, type etc. “Epitome” is also another word for an abstract or summary of a book or article.

was a Russian-French artist, one of the most successful of the 20th century. Unlike so man artists, Chagall was able to achieve wealth and notoriety for his work during his own lifetime. It helped that Chagall’s lifetime was a long one. He passed away in 1985, at the age of 97 years young.

was a Polish composer, who spent most of his life in France. Chopin was most famous for his piano works in the Romantic style. Chopin was a sickly man, though, and died quite young at 39. For many of his final years he had a celebrated and tempestuous relationship with the French author George Sand (the nom de plume of the Baroness Dudevant). Those years with Sand may have been turbulent, but they were very productive in musical terms.

54. Neighbor of Bhutan : INDIA
The Kingdom of Bhutan is located between India and China, at the eastern end of the Himalayas. One interpretation of the name “Bhutan” is that it comes from the Sanskrit words meaning “at the end of Tibet”. This makes sense, as Bhutan lies immediately south of Tibet (now part of China).

56. No enrollees at Smith College : MALES
Smith College is a private, women’s school in Northampton, Massachusetts. Smith is famous for being the site of the first ever Women’s Basketball game, played just one year after the game was invented in 1891. Smith is also the college that graduated the likes of Gloria Steinem, Margaret Mitchell, Sylvia Plath and Julia Child.