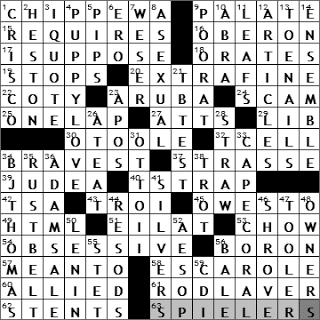 Across
1. Treaty of Fort McIntosh signer, 1785 : CHIPPEWA
The US Government signed a treaty in 1785 with four nations of Native Americans: the Wyandotte, Delaware, Chippewa and Ottawa. In return for captive settlers, the nations ceded swaths of land in Ohio Country. The treaty was signed at Fort McIntosh at the junction of the Ohio and Beaver Rivers, in 1785.

16. William Herschel discovery of 1787 : OBERON
Oberon is a moon of Uranus, the second largest of all the planet’s moons. Oberon was discovered in 1787 by William Herschel, on the same day that he found Uranus’s largest moon, Titania. Oberon and Titania are the King and Queen of the fairies in “A Midsummer Night’s Dream”.

22. De Gaulle’s predecessor : COTY
Rene Coty was the President of France from 1954 to 1959, and notably presided over the Algerian War. Coty resigned after five years, making way for the 7-year term of Charles de Gaulle.

24. Contrivance for taking people for a ride : SCAM
The sang term “scam” may come from the British slang term “scamp” used for a cheater or swindler.

27. They often want to settle: Abbr. : ATTS
Attorneys are often trying to settle out of court.

29. Ad conclusion? : LIB
“Ad libitum” is a Latin phrase meaning “at one’s pleasure”. In common usage, the phrase is usually shortened to “ad lib”. On the stage, the concept of an “ad lib” is very familiar. For example, an actor who substitutes his own words for forgotten lines uses an ad lib. Or, a director may instruct an actor to use his or her own words at a particular point in a performance, to promote a feeling of spontaneity.

30. “What’s New, Pussycat?” co-star, 1965 : O’TOOLE
Woody Allen made his first film appearance in “What’s New Pussycat?”, released in 1965. It was also the first script that Woody Allen had been able to get produced. The film is a madcap comedy with a great cast including Peter Sellers, Peter O’Toole and Ursula Andress. Burt Bacharach and Hal Davis wrote the theme song, and the old Tom Cat himself, Tom Jones, sang it. I’ll say it again, Tom Jones has the best male voice in pop music …

32. Antigen attacker : T CELL
T cells are a group of white blood cells that are an essential component of the body’s immune system. An antigen is a molecule recognized by the immune system, one that can be chemically bound and neutralized by an antibody. An antigen used to be called an “ANTI-body GEN-erator”.

37. Automobil site : STRASSE
In Germany an automobile (automobil) is found in the street (strasse).

40. Pump alternative : T-STRAP
A pump is a woman’s shoe that doesn’t have a strap. Such shoes are probably called “pumps” because of the sound they make while walking in them.

42. Subway inspection org. : TSA
The Transportation Security Administration was of course created in 2001, soon after the 9/11 attacks.

43. Empathic counselor of sci-fi : TROI
Deanna Troi, the character on “Star Trek: The Next Generation”, is played by the lovely Marina Sirtis. Although Sirtis is a naturalized American citizen, and has what I would call a soft, American accent on the show, she was born in the East End of London and has a natural accent off-stage that is more like that of a true Cockney.

49. What a webmaster may master : HTML
HTML is HyperTest Markup Language, the language used to write most Internet web pages (including this one).

51. Gulf of Aqaba city : EILAT
Eilat the most southerly city in Israel, sitting right at the northern tip of the Red Sea, on the Gulf of Aqaba.

53. Eats : CHOW
“Chow” is an American slang term for food, that originated in California in the mid-1800s. It comes from Chinese pidgin English “chow-chow”, meaning “food”.

56. Group 13 member, in chemistry : BORON
Boron is the chemical element with the atomic number of 5. In lies over to the right in Group 13 of the Periodic Table of the Elements.

58. Common salad ingredient : ESCAROLE
Escarole is another name for endive, the leaf vegetable. It belongs to the chicory genus, and is in the daisy family.

61. Eponym of an Australian Open arena : ROD LAVER
Rod Laver is a former professional tennis champion, from Australia. He won all four Grand Slam singles titles in 1962, and at that time he wasn’t even a professional player. He won all four titles again in 1969, no longer an amateur, becoming the only tennis player to have achieved the feat twice. Not surprisingly, Laver was the world’s number one for seven consecutive years, from 1964 to 1970. After he retired, Laver suffered a stroke during an interview with ESPN in 1998, but by all accounts he has made an excellent recovery.

62. Surgeons’ insertions : STENTS
In the world of medicine and surgery, a stent is an artificial tube inserted inside a vessel in the body, say a blood vessel, so that it reduces the effects of a local restriction in the body’s conduit.

63. Deliverers of product lines? : SPIELERS
A spiel is a lengthy speech or argument designed to persuade, perhaps a sales pitch. “Spiel” comes to us from German, either directly (“spiel” is the German for “play”) or via the Yiddish “shpil”.

1. Big name in oil : CRISCO
The Crisco brand of shortening was the first shortening to be made entirely from vegetable oil. Although that sounds like a good thing, it’s actually made by hydrogenating vegetable oil so that it has physical properties similar to the animal shortening it was designed to replace. That hydrogenation turns good fats into bad fats, so medical professionals suggest limited intake.

2. El Cid player : HESTON
“El Cid” is an epic film released in 1961 that tells the story of the Castillian knight, El Cid. The two big names at the top of the cast were Charlton Heston and Sophia Loren, but just who was the biggest star? When Loren discovered that a huge billboard promoting the movie in Times Square showed that her name was below Heston’s, she sued the movie’s producers.

5. Marks in a casino : PIPS
The marks on a playing card are known as pips.

6. Leandro’s partner : ERO
The Greek myth of Hero and Leander gave rise to a couple of operas (by Giovanni Bottesini and Arrigo Boito) and a more famous cantata from George Frideric Handel, all called “Ero e Leandro”.

7. River to the North Sea : WESER
The Weser is the river famously used by the Pied Piper to drown the rats of Hamelin.

The legend of the Pied Piper of Hamelin dates back to medieval times. Recently there have been suggestions that the story is rooted in some truth, that the town of Hamelin did in fact lose many of its children, perhaps to plague. The suggestion is that the tale is an allegory.

10. Magician’s opening : ABRA
Abracadabra has a long history. It was used as far back as the 2nd century AD in Ancient Rome, when the word was prescribed by a physician to be worn on an amulet, to help his emperor recover from disease. The word is Aramaic, and has the approximate translation of “I will create as I speak”.

12. They’re in rags : ARTICLES
We’ve been calling newspapers that we don’t like “rags” since the early 1700s.

13. They may be treated in a spa : TOENAILS
The word “spa” comes to us from Belgium, as Spa is the name of a health resort there. The name “Spa” comes from the Walloon word “espa” meaning “spring, fountain”.

14. Pieces together? : ENSEMBLE
Pieces come together in an ensemble, the French word for “together”.

21. American Lung Assn. recommendation : TB TEST
A test for TB involves injecting an extract, taken from the bacterium that causes TB, under the outer layer of skin of the patient. Any sign of a reaction on the skin, is an immune response indicating that the patient has previously been exposed to TB.

23. Blood drive spec. : A-POS
The most important grouping of blood types is the ABO system. Blood is classified as either A, B, AB or O, depending on the type of antigens on the surface of the red blood cells. A secondary designation of blood is the Rh factor, in which other antigens are labelled as either positive or negative. When a patient receives a blood transfusion, ideally the donor blood should be the same as that of the recipient, as incompatible blood cells can be rejected by the recipient. However, blood type O-Neg can be accepted by recipients with all blood types, AB or O, positive or negative. Hence someone with O-neg blood type is called a “universal donor”.

31. Holy Roman emperor, 973-83 : OTTO II
Otto II was also called Otto the Red, and was son of the Otto the Great. His son became the Holy Roman Emperor, Otto III.

33. Florida city on the Caloosahatchee : CAPE CORAL
Cape Coral is very much a planned community in Florida, founded in 1957. The intention by the developers was to create a Waterfront Wonderland. The result is a city with 400 miles of navigable waterways, more than any other city on the planet!

34. Singer with the 1966 hit “I’m So Lonesome I Could Cry” : B. J. THOMAS
B. J. Thomas had his big hits in the sixties and seventies, including “Raindrops Keep Fallin’ on My Head” from the great 1969 movie “Butch Cassidy and the Sundance Kid”.

36. Water : ADAM’S ALE
I suppose water was all that Adam had available to him to drink, so that’s how the expression Adam’s ale arose (I am guessing … can’t find anything definitive anywhere). It makes a nice juxtaposition with “the demon drink”!

38. Compete in the Breeders Crown : TROT
The Breeders Crown is a whole series of harness races held annually, nowadays primarily at the Meadowlands near New York City, and Mohawk Raceway in Ontario.

41. Some Olympians get them : SILVERS
At the first Modern Olympic Games, held in 1896 in Athens, only first and second place were recognized with medals (gold and silver). The bronze medal was added for the 1904 Games.

46. Freed from guilt : SHROVE
“To shrive” is to obtain absolution by confessing and doing penance. The past tense of “shrive” is “shrove”. The verb gives its name to Shrove Tuesday, the day before the season of fasting known as Lent. Shrove Tuesday is named in recognition of the early Christian tradition of confessing the week before Lent.

50. Comintern creator : LENIN
Comintern is the abbreviated name of Communist International, an organization founded in Moscow in 1919. Comintern’s objective was the overthrow of the bourgeoisie worldwide and the creation of an international Soviet republic.

52. “The Frogs Who Desired a King” author : AESOP
Aesop lived in Ancient Greece, probably around the sixth century BC. Supposedly he was born a slave, somehow became a free man, but then met with a sorry end. He was sent to the city of Delphi on a diplomatic mission, but apparently insulted the Delphians instead. He was tried on a charge of stealing from a temple, and then sentenced to death and was thrown off a cliff.

55. Editorial reconsideration : STET
Stet is the Latin word meaning “let it stand”. In editorial work, the typesetter is instructed to disregard any change previously marked by writing the word “stet” beside the change, and then underscoring the change with a line of dots (or dashes).

56. “Oklahoma!” set piece : BALE
“Oklahoma!” is the first musical written by the team of Rodgers & Hammerstein. The story is based on a play by Lynn Riggs called “Green Grow the Lilacs” that dated back to 1931.  “Oklahoma!” opened on Broadway in 1943 and finally closed in 1948 after 2,212 performances. Since 1977 you can see the show 6 night a week right throughout the summer in an outdoor theater near Tulsa, Oklahoma.

59. Year the Visigoths invaded Italy : CDI
The East Germanic tribe called the Goths has two main branches, called the Ostrogoths and the Visigoths. The Visigoths had a troubled relationship with the Roman Empire and participated in several wars against Rome.