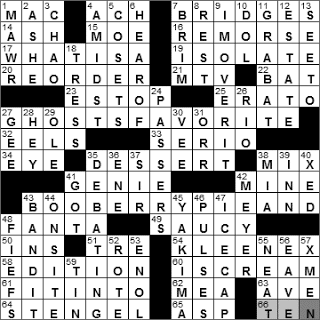 THEME: Q: WHAT IS A GHOST’S FAVORITE DESSERT?
A: BOOBERRY PIE AND I SCREAM!
COMPLETION TIME: 14m 52s
ANSWERS I MISSED: 0

Across
1. Bucko : MAC
“Bucko” was originally a nautical term of address, dating back at least to 1883 when it referred to a cocky, swaggering sort of guy.

4. Berlin cry : ACH
The exclamation “ach!” is usually translated into English as “oh!”

7. George Washington and others : BRIDGES
New York City’s George Washington Bridge links the Washington Heights neighborhood of Manhattan, across the Hudson River, with Fort Lee in New Jersey. When the bridge was opened in 1931, it had one deck, allowing six lanes of traffic to traverse the river. The bridge’s designer allowed for the construction of a second deck under the first, and this was added in 1946. Some locals refer to the second deck as “Martha” …

15. ___ Greene, “The Godfather” gangster : MOE
Moe Greene is a character in Mario Puzo’s novel “The Godfather”. The character bears a resemblance to the real-life gangster Bugsy Siegel, as both Siegel and Greene are driving forces behind the development of the gambling industry in Las Vegas. In “The Godfather” movies, Moe Greene was played by Alex Rocco.

16. “The poison of life,” per Brontë’s Rochester : REMORSE
Mr. Rochester is one of the main characters in “Jane Eyre”, “Jane Eyre” is of course the novel written by Charlotte Bronte, and published as “Jane Eyre. An Autobiography” under the pen name Currer Bell. It’s a little too dark for my taste …

21. “Punk’d” cable channel : MTV
MTV’s “Punk’d” is sort of a contemporary version of “Candid Camera”, with the show focusing on practical jokes being played on celebrities, with the action filmed with hidden cameras. The show aired from 2003 to 2007 and was produced and hosted by actor, Ashton Kutcher. I’m not a big fan of practical jokes myself, I must say. The word is that “American Pie” star Shannon Elizabeth isn’t either. She filed for divorce from her husband apparently furious with him as he cooperated with Kutcher in pranking her into believing they had been secretly filmed on a celebrity porn tape.

23. Bar, at the bar : ESTOP
The legal term “estop” means to block or stop using some legal device. The word “estop” comes from Old French, in which “estopper” means “to stop up” or “to impede”.

25. Poet’s Muse : ERATO
In Greek mythology, the muses are the goddesses who inspire the creation of literature and the arts. The number of muses is a subject of debate at times, but the most popular view is that there are nine:

Before the “adoption” of the nine muses of Greek mythology, there were originally three muses, the three Boeotian Muses. These were:

33. Prefix with comic : SERIO
Something described as “seriocomic” has both serious and comical elements, but generally the comic side predominates.

41. Bottled spirit : GENIE
The “genie” in the bottle takes his name from “djinn”. “Djinns” were various spirits considered lesser than angels. People who exhibit unsavory characteristics can be said to be possessed by djinn. Independently, in Latin-based languages, the word “genie” is from the Latin genius, a guardian spirit thought to be assigned to each person at birth. When the book “The Thousand and One Nights” was translated into French, the word “djinn” was transformed into “génie”, because of the similarity in sound and the related spiritual meaning. Purely as a result of that translation the word genie has come to mean that djinn that pops out of the bottle. Quite interesting …

42. Go for the gold? : MINE
Very deceptive wording. Lovely …

48. Soft drink brand : FANTA
The soft drink “Fanta” has a very interesting history. As WWII approached, the Coca-Cola plant in Germany had trouble obtaining the ingredients it needed to continue production of the cola beverage, so the plant manager decided to create a new drink from what was available. The new beverage was built around whey (left over from cheese production) and pomace (left over after juice has been extracted from fruit). The inventor asked his colleagues to use their imagination (“Fantasie” in German) and come up with a name for the drink, so they piped up “Fanta!”

51. Italian TV channel : TRE
“Tre” is the Italian for “three”, and lots of Italians watch Channel 3.

54. Sniffler’s supply : KLEENEX
Even though Kleenex is sometimes used today as a generic term for a tissue, Kleenex is a brand name owned by Kimberley-Clark. Kleenex facial tissues came about after WW1. The material used in the tissue had been developed as a replacement for cotton that was in high demand as surgical tissue during the war. The material developed was called “Cellucotton” and was used in gas mask filters. It was first sold as a facial tissue under the name Kleenex in 1924.

58. Bibliophile’s concern : EDITION
A bibliophile: a lover of books.

61. Dovetail with : FIT INTO
One simple type of joint used in carpentry is a mortise and tenon, basically a projection carved at the end of one piece of wood that fits into a hole cut into the end of another. In a dovetail joint, the projecting tenon is not rectangular but is cut at a bias, so that when the dovetails are joined they resist being pulled apart. You’ll see dovetail joints in drawers around the house.

Wisconsin Avenue in Washington, D.C. actually predates the city in the sense that the section of the road in Georgetown, originally called High Street, was around for fifty years before being extended into the new city. As required by the plan drawn up by architect Pierre L’Enfant, Georgetown’s High Street was renamed to Wisconsin Avenue in 1895.

64. Yankee manager who wore #37 : STENGEL
Casey Stengel was a professional baseball player, playing from 1912-1925, and managing from 1934-1965. Stengel was born in Kansas City. He had German heritage, and so was called “Dutch” for much of his early life. As he acquired fame on the baseball field, he was given the nickname “Casey”, largely because he came from Kansas City (“KC”) and also because of the popularity of the poem “Casey at the Bat”. He was a smart and erudite guy when it came to baseball, so sportswriters tended to call him “The Old Professor”.

65. African menace : ASP
The asp is a venomous snake found in the Nile region of Africa. It was so venomous that the asp was used in ancient Egypt and Greece as a means of execution. Cleopatra observed such executions noting that the venom brought on sleepiness without any painful spasms. When she opted to commit suicide, the asp was therefore her chosen method.

66. Base ___ : TEN
We use the base ten of course, for our number system. Interestingly, base 60, also known as the sexagesimal system, was used by the ancient Babylonians. This ancient usage gives rise to our having 60 seconds in a minute, and 360 (6 x 60) degrees in a circle.

Down
1. Bryn ___ College : MAWR
I used to live not far from Bryn-mawr in Wales, the town with the highest elevation in Wales. Bryn mawr is Welsh for “big hill”. Bryn Mawr college is a private women’s school, in the Pennsylvania town of Brynn Mawr, named after its Welsh counterpart. Brynn Mawr college was the first university to offer graduate degrees to women.

2. “Off the Court” autobiographer : ASHE
Arthur Ashe was a professional tennis player from Richmond, Virginia. In his youth he found himself having to travel great distances to play against Caucasian opponents, due to the segregation that still existed in Richmond. He was rewarded for his dedication by being selected for the 1963 US Davis Cup team, the first black player to be so honored. He still ran into trouble because of his ethnicity though, as in 1968 he was denied entry into South Africa to play in the South African Open. In 1979, Ashe suffered a heart attack and had bypass surgery. He had to have corrective surgery in 1983, and contracted HIV from blood transfusions during the surgery. He eventually passed away in 1993, due to complications from AIDS.

3. Elaine ___, George W. Bush’s only labor secretary : CHAO
When President George W. Bush appointed Elaine Chao as Secretary of Labor, he made a bit of history as Chao then became the first Chinese American in history to hold a cabinet post. It turned out that Chao became the only cabinet member to hold her post for President Bush’s full eight years in office. In 1993, Chao married Mitch McConnell, the Republican Leader of the US Senate.

5. Math groups : COSETS
I’ve done a bit of math in my time, but I can’t remember anything about cosets …

7. Spilling point : BRIM
Our word “brim” evolved from “brymme” which dates back to about 1200, meaning “the edge of the sea”.

8. Staff symbol : REST
On a musical staff, in between some of those notes, on might see the occasional “rest”.

26. Kia model : RIO
Kia have making the subcompact model called a Rio since 2000.

36. Chemical suffix : ENE
An alkene is an organic compound made up of carbon and hydrogen atoms. It differs from an alkane in that it has at least one C=C double bond. The simplest alkene is the gas ethylene, a major raw material in the manufacture of plastics (like polyethylene).

38. War stat : MIA
The third Friday of September has been officially designated by Congress as National POW/MIA Recognition Day.

39. Barnard’s ___, locale in “Great Expectations” : INN
In the Charles Dickens novel “Great Expectations”, Pip, the hero of the piece, takes lodgings in Barnard’s Inn for a number of years. Barnard’s Inn is a real location in London that has been around in some form since the mid-13th century. Today it is the home of the rather unique Gresham College. Gresham enrolls no students, and instead has a roster of professors that provides free lectures that are open to the public.

43. Picaroon : BANDIT
A picaroon, also known as a picaro, is a rogue, adventurer or perhaps a pirate.

45. Washington city, river or tribe : YAKIMA
The city and county of Yakima lie southeast of Mount Ranier in the state of Washington. The Yakima Valley is recognized as one of the best apple-producing regions in the world, and it also produces three quarters of all the hops grown in the US.

48. Feudal domains : FIEFS
In the days of feudalism, a “fief” was basically a “fee” (the words “fee” and “fief” have the same origins) paid by a lord in exchange for some benefit to him, perhaps loyalty, or military service. The fief itself was often land granted by the Lord.

53. Hydroxyl compound : ENOL
An enol is an alkene with a hydroxyl group, sort of part alkene, part alcohol. The term “enol” therefore, is a portmanteau of alkene and alcohol.

57. 2000 Hugh Jackman movie : X-MEN
X-Men are a team of superheroes created by Stan Lee and published in Marvel Comics. Nowadays they are perhaps best known as the subject of a series of movies, with Hugh Jackman playing Wolverine, and Patrick Stewart playing Professor Xavier.