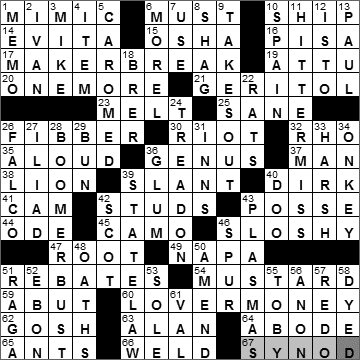 THEME: ER for OR … all the theme answers are well-known expressions containing the word “OR”, in which the OR is changed to the suffix -ER to give the answer to its clue i.e. MAKER BREAK (make or break), LOVER MONEY (love or money), HITTER MISS (hit or miss), BOOMER BUST (boom or bust)
COMPLETION TIME: 6m 13s
ANSWERS I MISSED: 0

1. Mynah bird, e.g. : MIMIC
Some species of myna (also mynah) bird are known for their ability to imitate sounds.

10. Send by FedEx or UPS : SHIP
FedEx began operations in 1973, as Federal Express, but now operates very successfully under it’s more catchy, abbreviated name. Headquartered in Memphis, with its “SuperHub at Memphis International Airport, FedEx is the world’s largest airline in terms of tons of freight flown. And, due to the presence of FedEx, Memphis Airport has the largest-volume cargo operation of any airport worldwide.

15. Worker welfare grp. : OSHA
The Occupational Safety and Health Administration was created in 1970 during the Nixon administration. OSHA regulates workplaces in the private sector only, the one exception being the US Postal Service.

16. Noted tower site : PISA
Pisa is right on the Italian coast, sitting at the mouth of the River Arno, ans famous for its Leaning Tower. The tower is actually the campanile (bell tower) of the city’s cathedral. It has been leaning since it was completed in 1173. Just shows you how important good foundations are …

21. “Tired blood” tonic : GERITOL
The “Geritol” brand name was very carefully chosen at the time it was introduced, in 1950, to suggest that it is efficacious for us as we move on in years. In general, the formula has always featured iron and several B-complex vitamins. Geritol ran afoul of the Federal Trade Commission (FTC) in the early sixties due to its claims that it is effective in relieving tiredness, regardless of the cause. In 1965, the company was instructed by the FTC to make it clear in its advertising that Geritol’s formula is only effective in relieving tiredness in individuals suffering from anemia (a lack of iron).

25. Having all one’s marbles : SANE
Even though the game of “marbles” has been around since the early 1700s, the use of marbles meaning “one’s faculties, common sense”, probably has nothing to do with the game. Rather, the French word “meubles” meaning furniture, was brought into English as “marbles” in the mid-1800s to mean “personal effects, furniture”. It was “marbles” in this sense that evolved into “having one marbles”, a slang term from the late twenties, meaning “having one’s faculties”.

26. Truth stretcher : FIBBER
To “fib” is to “to tell a lie”. It likely comes from “fibble-fable” meaning “nonsense”, itself derived from “fable”.

32. P, in Greece : RHO
Rho is the Greek letter that looks just like our Roman letter “p”.

36. Homo vis-à-vis humans : GENUS
37. Homo sapiens : MAN
The Homo genus includes, of course, the species Homo sapiens (modern humans), but we’re the only species left. All the other species that were part of the genus Homo are all extinct. The last known species related to humans was Homo neanderthalensis (Neanderthal Man) which died off about 24,000 years ago. However, another species was discovered in Indonesia in 2003 that has been dubbed Homo floresiensis (Flores Man … sometimes called “hobbit”), and it may possibly have lived as recently as 12,000 years ago. Watch this space …

38. “The Wizard of Oz” coward : LION
Bert Lahr’s most famous role was that of the cowardly lion in “The Wizard of Oz”. Lahr had a long career in burlesque, vaudeville and on Broadway. Remember the catchphrase made famous by the cartoon character Snagglepuss, “Heavens to Murgatroyd!”? Snagglepuss stole that line from a 1944 movie called, “Meet the People” in which it was first uttered by Bert Lahr.

40. Dagger : DIRK
“Dirk” is the Scots word for dagger, and is the name given to a knife that is worn hanging from a belt in traditional dress that includes a kilt. The dagger worn in the sock isn’t a dirk (as is supposed by many) but rather is called a “sgian dubh”, “a black or hidden knife”.

44. Horatian creation : ODE
A Horatian Ode is an ode with a specific structure, designed to resemble the odes of the Roman poet, Horace.

49. Vintners’ valley : NAPA
Apparently the name “Napa” comes from the Native American Patwin word “napo” meaning house. You can get an idea of what life was like in the Napa Valley in the late 1800s by reading Robert Louis Stevenson’s book “The Silverado Squatters”. Stevenson wrote it while on an extended honeymoon in Napa with his new bride and adopted son in 1880, staying near Mount Saint Helena.

54. Condiment at Nathan’s : MUSTARD
Nathan’s Famous has held a Hot Dog Eating Contest every July 4th since 1916, and always at the same location on Coney Island.

63. Pioneering D.J. Freed : ALAN
Alan Freed was an early disk-jockey, who was known by the nickname “Moondog”. Based in the US, he also recorded radio shows for broadcast in Europe. He earned quite a reputation promoting African-American rhythm and blues music, and ultimately rock and roll. However, Freed’s career came to an abrupt end when it was proven that he was at the receiving end of “payola” payments, profiting from promotion of specific records on his shows.

67. Religious council : SYNOD
The word synod comes from the Greek word for assembly, or meeting. A synod is a church council, usually in the Christian faith.

2. “Terrible” czar : IVAN
The Grand Prince of Moscow, Ivan IV, became known as Ivan the Terrible. The name “terrible” is a translation from Russian, but perhaps gives the wrong impression. The Russian word is “Grozny”, which is more akin to “strict” and “powerful” rather than “cruel” or “abominable”.

4. Tabloids twosome : ITEM
An unmarried couple known to be involved with each other might appear in the gossip columns. This appearance as “an item” in the papers, led to the use of “item” to refer to such a couple, but only since the very early seventies.

5. Ricocheted, as a cue ball : CAROMED
A carom is a ricochet, the bouncing of some projectile off a surface. It has come to mean the banking of a billiard ball, the bouncing of the ball of the side of the table.

6. Tasty mushroom : MOREL
The morel is that genus of mushroom with the honeycomb-like structure on the cap. They’re highly prized, especially in French cuisine. Morels should never be eaten raw as they are toxic, with the toxins being removed by thorough cooking.

13. Left-handed Beatle : PAUL
As a young man, Paul McCartney swapped a trumpet he was given by his father for his first acoustic guitar which, as a left-hander, he had difficulty playing. Fortunately he noticed on a Slim Whitman poster that Whitman played left-handed simply by swapping the order of the strings on his guitar, and so he followed suit.

18. Term of address used by Uncle Remus : BR’ER
Br’er Rabbit and Br’er Fox are characters in the Uncle Remus stories, written by Joel Chandler Harris. His stories are adaptations of African American folk tales that he collected across the American South. The “Br’er” of course stands for “brother”.

27. Homeric epic : ILIAD
The Iliad is the epic poem by the Greek poet Homer, which tells the story of the siege of Ilium during the Trojan war.

A baby boomer is someone who was born in the post-WWII baby boom. The rate of births had been falling fairly steadily in the US at least since 1900, but this trend was sharply reversed in 1946 after WWII. The higher birth rate continued until 1964, when it returned to pre-war levels. Since then, the birth rate has continued to decline, although at a slower pace. The period between 1946 and 1964 is defined as the “baby boom”.

29. Sloppy joe holder : BUN
Sloppy joe is a dish usually made of ground beef, onions, ketchup and seasonings, all served on a bun. There are two stories that supposedly explain the origin of the name “sloppy joe”. One is that it comes from Sloppy Joe’s Bar in Key West, Florida; the other is that it was invented by a cook named Joe in Sioux City, Iowa.

31. Bed-and-breakfasts : INNS
An intimate inn (in the US) is a bed & breakfast. A bed & breakfast back in Ireland is more basic, and is usually cheaper than a comparable hotel room.

36. Wearing a long face : GLUM
Both “glum” and “gloom” have the same root, coming from the Middle English verb “gloumen” meaning “to become dark”.

40. “Inka Dinka ___” : DOO
“Inka Dinka Doo” was Jimmy Durante’s theme song, a novelty piece composed by Durante in 1934. Such was his association with the song, that when Durante’s charity paid for a heated therapy swimming pool in Port Arthur, Texas in 1968, it was named the “Inka Dinka Doo Pool”.

43. Blood bank supplies : PLASMAS
Basically, whole blood a suspension of blood cells in blood plasma, a yellow liquid made up mainly of water with dissolved proteins, glucose and other essential components.

46. Cowboy boot feature : SPUR
And that pointed wheel on a spur, which digs into the side of the poor horse, that’s called a rowel.

51. Sitar music : RAGA
Raga isn’t really a type of music as such, but has been described as the “tonal framework” in which Indian classical music is composed. Ravi Shankar is perhaps the most famous rage virtuoso (to us Westerners).

52. Black, to bards : EBON
Ebony is another word for the color black (often shortened to “ebon” in poetry). Ebony is a dark, black wood that is very dense, and is one of the few types of wood that sinks in water. Ebony has been in high demand, so the species of trees yielding the wood are now considered threatened. It’s in such short supply, that unscrupulous vendors have been known to darken lighter woods with shoe polish, so watch out …

55. Man-shaped mug : TOBY
The verb “mug” means to make an exaggerated facial expression. The term comes from drinking mugs (called Toby mugs) that are in the made in the shape of heads with grotesque expressions.

58. Did some batiking : DYED
Genuine batik cloth is produced by applying wax to the parts of the cloth that are not to be dyed. After the cloth has been dyed, it is dried and then dipped in a solvent that dissolves the wax.

61. Kilmer of film : VAL
Val Kilmer’s first big leading role in a movie was playing Jim Morrison in Oliver Stone’s 1991 biopic “The Doors”. A few years later he was chosen for the lead in another big production, “Batman Forever”. Things haven’t really gone as well for Kilmer since then, I’d say. Off the screen, he flirted with the idea of running for Governor of New Mexico in 2010. A Hollywood actor as a Governor? Would never happen …