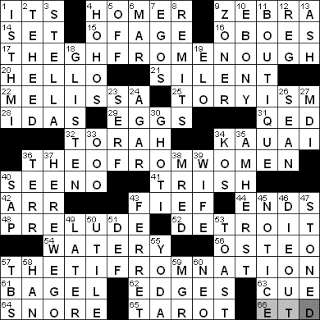 THEME: How to spell “fish” … GH-O-TI (illustrating the irregularities of the English language!)
COMPLETION TIME: 16m 46s
ANSWERS I MISSED: 0

9. Last picture in an alphabet book : ZEBRA
Zee is for Zebra (although it was “zed” is for zebra in my alphabet book!).

16. Ducks, in “Peter and the Wolf” productions : OBOES
As is the cae for many I am sure, Prokofiev’s “Peter and the Wolf” was my introduction to the word of classical music, played for us at school many, many moons ago. Prokofiev wrote the piece as a commissioned work for the Central Children’s Theater in Moscow, in 1936. He loved the idea of the project, and wrote the story and music in just four days!

The oboe is perhaps my favorite of the reed instruments. The name “oboe” comes from the French “hautbois” which means “high wood”. When you hear an orchestra tuning before a performance, you’ll note (pun intended!) the oboe starts off the process by playing an “A”. The rest of the musicians in turn tune to that oboe’s “A”. Oh, and if you want to read a fun book (almost an “exposé”) about life playing the oboe, you might try “Mozart in the Jungle

17. What to use to spell 30-Down, according to George Bernard Shaw, reputedly, Part 1 : THE GH FROM ENOUGH
36. Part 2 : THE O FROM WOMEN
57. Part 3 : THE TI FROM NATION
George Bernard Shaw probably wasn’t the first person to use “ghoti” to illustrate the irregularities in English pronunciation, but he certainly popularized the concept. To spell “fish” phonetically, one might use letters other than F-I-S-H:

22. Notorious 1999 computer virus : MELISSA
The Melissa virus was what is called a “mass-mailing macro virus”. It turned up in 1999, and wreaked havoc on mail servers all across the globe. The virus was sent as a Word document (called “list.doc”) attached to emails. When the word document was opened by the unsuspecting recipient, a macro tried to email the infected document to the first fifty names in the recipients email address book. The hacker that wrote the virus code was caught by the FBI, a David Smith of New Jersey. and he was sentenced to ten years in jail and served 20 months in federal prison. And the name Melissa? She was a lap dancer that Smith met in Florida!

25. Conservative philosophy in Britain : TORYISM
In the UK the Tories are the Conservative Party, led by David Cameron. The Tories are currently ruling the UK in a coalition, with the Liberal Democrat Party as a minority partner.

28. Actress Lupino and others : IDAS
Actress Ida Lupino was also a successful director, in the days when women weren’t very welcome behind the camera. She had already directed four “woman’s” shorts when she stepped in to direct the 1953 drama “The Hitch-Hiker, taking over when the original director became ill. “The Hitch-Hiker” was the first film noir movie to be directed by a woman, and somewhat of a breakthrough for women in the industry.

31. Letters from a mathematician : QED
Q.E.D. is used at the end of a mathematical proof (or a philosophical argument). The acronym stands for the Latin “quod erat demonstrandum” meaning “that which was to be demonstrated”.

– Hawaii County (covers just the Big Island)
– County of Honolulu (includes all of Oahu)
– Kalawao County (the smallest county in the US, on the island of Molokai)
– Kauai County
– Maui County

40. Beginning of a saying about evil : SEE NO
The old adage “see no evil, hear no evil, speak no evil” originated in the 17th century. The phrase comes as an interpretation of a wood carving over a door in a shrine in Nikko, Japan. The carving depicts the “Three Wise Monkeys”:

43. Workplace for a 23-Down : FIEF
(23. Worker on a 43-Across : SERF)
In the days of feudalism, a “fief” was basically a “fee” (the words “fee” and “fief” have the same origins) paid by a lord in exchange for some benefit to him, perhaps loyalty, or military service. The fief itself was often land granted by the Lord.

52. Lion’s home : DETROIT
The Detroit Lions are the NFL team that plays home games at Ford Field in Detroit, Michigan. The team was founded way back in 1929 as the Portsmouth Spartans, from Portsmouth, Ohio. The Spartans joined the NFL during the Great Depression as other franchises collapsed. However, the Spartans couldn’t command large enough gates in Portsmouth so the team was sold and relocated to Detroit in 1934.

56. Prefix with -pathy : OSTEO-
The healthcare discipline known as osteopathy was founded in 1892 by an American physician who opened up the first school of osteopathy in 1892 in Kirksville, Missouri. Osteopaths emphasise the role played by the musculoskeletal system in health and disease.

64. Noisome noise : SNORE
Something “noisome” is harmful or annoying.

65. The Tower, e.g. : TAROT
Tarot cards have been around since the mid-1400s, and for centuries were simply used in card games. It has only been since the late 1800s that the cards have been used by fortune tellers to predict the future.

Down
1. Panama and Suez : ISTHMI
The word “isthmus” comes the Greek word for “neck”. it is a narrow strip of land that usually connects two large land masses. The most notable examples of the formation are the Isthmus of Corinth in the Greek peninsula, and the Isthmus of Panama, connecting North and South America.

3. Designer McCartney : STELLA
British fashion designer Stella McCartney is the daughter of Paul and Linda McCartney. Stella created a bit of a fuss in 2007 when she designed a silver necklace featuring just a single leg as a pendant. The design was a thinly veiled attack on Heather Mills, her father’s wife. Mills was a famous amputee, and was engaged in acrimonious divorce proceedings with Paul McCartney at the time.

4. Alternative to Ring Dings : HO HOS
Ho Hos snack cakes were first produced in San Francisco in 1967; not the best thing to come out of the sixties I’d say …

11. Shop : BOUTIQUE
Boutique is the French word for a small shop.

19. Grp. with the platinum album “Out of the Blue” : ELO
ELO of course stands for the Electric Light Orchestra, a symphonic rock group from the north of England. Their manager was Don Arden, father of Sharon Osbourne (wife of Ozzy).

“Out of the Blue” is a double album released in 1977 by ELO. All the tracks were written by band leader Jeff Lynne in just three weeks in a rented chalet in the Swiss Alps. Creative environment I guess …

24. Lab gel : AGAR
Agar is a jelly extracted from seaweed, with many uses. It is found in Japanese desserts, and can also be used as a laxative or as a food thickener, and it is the most common medium used for growing bacteria in Petri dishes.

33. Tic-tac-toe win : OOO
When I was growing up in Ireland, we played “noughts and crosses” … our name for tic-tac-toe.

The Five Colleges are independent entities, but work together. Classes at one college may be accepted as credit in the other for example.

38. Who’ll “talk ’til his voice is hoarse,” in a 1960s sitcom : MR ED
Mr. Ed was a palomino horse, whose real name was Bamboo Harvester. His voice came courtesy of actor Allan Lane.

49. “Peace out” : LATER
The slang phrase “peace out” is a friendly way to say goodbye. It originated in the sixties when the hippie culture were in the habit of using “peace” as a greeting. The “out” was imitating the radio custom of using “over and out” to end a conversation.

55. Jedi with a big forehead : YODA
Yoda is one of the most beloved characters of the “Star Wars” series of films. Yoda’s voice was provided by the great modern-day puppeteer Frank Oz of “Muppets” fame.

58. Old Chinese dynasty : HAN
The Han Dynasty was the second imperial dynasty of China and lasted from 206 BC to 220 AD. It came after the Qin Dynasty, and before the Three Kingdoms.