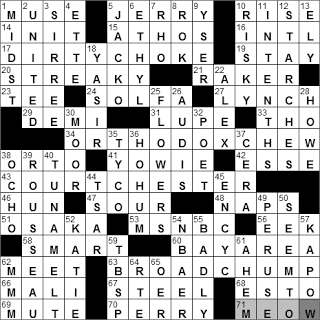 5. Rice with three rings : JERRY
Jerry Rice won three Super Bowl rings with the San Francisco 49ers: XXIII vs the Bengals, XXIV vs the Broncos, XXIX vs the Chargers.

15. One of a literary trio : ATHOS
The “Three Musketeers” were Athos, Porthos and Aramis, and their young protégé was D’Artagnan. A musketeer was an infantry soldier who was equipped with a musket. Funnily enough, Alexander Dumas’ “Three Musketeers” really didn’t use their muskets, and were better known for their prowess with their swords.

16. Part of I.M.F.: Abbr. : INTL
The International Monetary Fund was established at the end of 1945 with 29 major economies supporting and funding the effort to stabilize economies across the globe after WWII. Headquartered in Washington, D.C., today the IMF has 187 member countries.

24. Musical syllable singing system : SOLFA
The solfa syllables are: do, re, mi, fa, sol, la & ti. The solfa scale was developed from a six-note ascending scale created by Guido of Arezzo in the 11th century. He used the first verse of a Latin hymn to name the syllables of the scale:

27. “Dune” director : LYNCH
The less than successful 1984 movie “Dune” (directed by David Lynch) was an adaptation of the spectacularly successful 1965 novel of the same name written by Frank Herbert.

29. Moore in entertainment news : DEMI
Demi Moore was born Demetria Guynes and took the name Demi Moore when she married her first husband, Freddy Moore. She changed her name to Demi Guynes Kutcher a few years after marrying her present husband, Aston Kutcher. She still uses Demi Moore as her professional name.

There has been centuries of debate about how one interprets Hamlet’s soliloquy that begins “To be or not to be …”. My favorite opinion is that Hamlet is weighing up the pros and cons of suicide (“to not be — that is the question”).

43. Woo President Arthur? : COURT CHESTER
Chester Arthur was the 21st President, and came to power after the assassination of James Garfield in 1881. President Arthur was known to be socially adept, and was very conscious of his role in society. He was always immaculately attired, apparently even changing his pants several times in a day. He was called “Chet” by family and friends, and sometimes answered to his middle name, Alan. However, he insisted that Alan be pronounced with the stress on the second syllable, Al-an.

46. Pillager, maybe : HUN
The Huns were a nomadic people that originated in Eastern Europe in the 4th century. Under the command of Attila the Hun they developed a unified empire that stretched from modern-day Germany across to the steppes of Central Asia. The whole of the Hunnic Empire collapsed within a year of Attila’s death in 453 AD.

51. Where Panasonic and Sanyo are headquartered : OSAKA
Not so long ago, Panasonic was called Matsushita Electronics, the name it took from its founder when the company started in 1918. The products manufactured back then were lamp sockets, and in 1927 the company introduced a bicycle lamp. Even after the company became famous for producing electrical and electronic goods, Matsushita had a very successful line of Panasonic bicycles, as the founder was raised in a family with a bicycle shop and he was passionate about cycling.

Sanyo is a Japanese electronics manufacturer, based near Osaka, founded in 1947. The company name means “three oceans” reflecting the original aim to sell its products all around the world (across the three oceans, the Atlantic, the Pacific and the Indian).

53. It’s billed as “The Place for Politics” : MSNBC
MSNBC was founded in 1996 as a partnership between Microsoft (the “MS”) and General Electric’s NBC broadcasting operation. Microsoft only owns a minority share in MSNBC today, but is still an equal partner in the separate company, msnbc.com.

66. Landlocked land of Africa : MALI
The Republic of Mali is a landlocked country in western Africa, south of Algeria. The country’s most famous city is … Timbuktu …

70. Clinton defense secretary William : PERRY
William Perry served as Secretary of Defense from 1994 to 1997, during President Clinton’s first term in office. Perry had the novel task of overseeing the Pentagon during the days when the “Peace Dividend” called for a downsizing of the military. Perry resigned the post and would not serve for President Clinton’s second term, citing the growing frustration of working with a partisan Congress. My, how times haven’t changed …

5. Onetime tabloid nickname : JACKO
Michael Jackson was such a sad figure I always think. His apparently unrestrained lifestyle made him an easy target for the tabloids. The less than charitable arms of the media gave him the nickname “Wacko Jacko”.

6. Kind of alcohol : ETHYL
Ethyl alcohol is more usually known as ethanol. It is the alcohol found in intoxicating beverages, and nowadays is used as a fuel for cars.

7. Euripides character? : RHO
Euripides was a great playwright of Ancient Greece, renowned for his tragedies.

8. Seoul soldier : ROK
A South Korean soldier is known as a ROK, named after the acronym for the Republic of (South) Korea.

9. River that begins in Nord : YSER
The Yser originates in northern France and flows though Belgium into the North Sea. The Yser name is oft associated with WWI as it figured in a major battle early in the conflict. In the first three months of the war, the German Army pushed almost completely through Belgium, inflicting heavy losses on the Belgian Army as the defenders were forced to fight a fast-moving rearguard action. The Germans were intent on pushing right through Belgium, across France in a “race to the sea”. But, the Belgians, with the help of its Allies, decided to make a final stand at the Yser Canal in an effort to prevent the Germans reaching the French ports of Calais and Dunkirk. The 22-mile long defensive line was chosen at the Yser because the river and canal system could be flooded to create a barrier that might be defended. The plan was successful, and the front was “stabilized”. As we now know, millions of lives were lost over the coming years with very little movement of that battle line.

13. Screen swinger Ron : ELY
Ron Ely is most famous for playing the title role in the TV series “Tarzan” in the sixties. Years later Ely hosted the 1980 and 1981 “Miss America” pageants right after longtime host Bert Parks retired, before the job was taken over by Gary Collins. And Ely is a successful mystery novelist. He wrote “Night Shadows” and “East Beach” in the mid-nineties, both featuring his private eye, Jake Sands.

18. P.L.O.’s Arafat : YASIR
Yasser (also Yasir) Arafat was born in Cairo in 1929, the son of two Palestinians and the second-youngest of seven children. Arafat was beaten by his father as a child, and so he did not have a good relationship with him. Arafat did not attend his father’s funeral, nor did he visit his grave. The beatings were apparently administered because the young Arafat was repeatedly attending religious services in the Jewish quarter of Cairo. This infuriated his father, while Arafat’s explanation was that he wanted to “study the mentality” of the Jewish people.

22. “Family Ties” son : ALEX
Alex P. Keaton is a brilliant character in the sitcom “Family Ties” that ran from 1982-89. Alex was played, very ably, by a young Michael J. Fox. The character was a very vocal Young Republican, which might explain why President Reagan called “Family Ties” his favorite television show.

28. N.H.L. star nicknamed “Mr. Hockey” : HOWE
Gordie Howe is a retired, Canadian hockey player. Regarded as one of the games greatest players, he is sometimes referred to as “Mr Hockey”. He is the only hockey player to have competed in the NHL for five decades (from the forties through the eighties).

30. El Cid foe : MOOR
Rodrigo Diaz de Vivar was known as El Cid Campeador, which translates as “The Champion” or perhaps “The Lord, Master of Military Arts”. El Cid was a soldier who fought under the rule of King Alfonso VI of Spain (among others). However, he was sent into exile by the king in 1080, after acting beyond his authorization in battle. El Cid then offered his services to his former foes, the Moorish kings, and after a number of years of building a reputation with the Moors, he was recalled from exile by Alfonso. By this time El Cid was very much his own man. Nominally under the orders of Alfonso he led a combined army of Spanish and Moorish troops and took the city of Valencia on the Mediterranean coast, making it is headquarters and home. He died there, quite peacefully in 1099.

35. Tickle Me Elmo manufacturer : TYCO
Tickle Me Elmo was a sensational fad in the late nineties, with stores raising prices dramatically above the recommended retail price to take advantage of demand. Reportedly, prices as high as $1500 were paid at the height of the craze. The toy’s manufacturer, Tyco, originally planned to market the “tickle” toy as Tickle Me Tasmanian Devil (after the “Looney Tunes” character), but then went with “Elmo” after they bought the rights to use “Sesame Street” names.

37. Michael of “Superbad” : CERA
Michael Cera is a Canadian actor, a very talented young man who is riding high right now. He played great characters in the TV show “Arrested Development”, and the 2007 comedy-drama “Juno”. More recently he played the title role in “Scott Pilgrim vs. the World”.

38. ___ Rios (Jamaican resort) : OCHO
If you ever take a cruise ship to Jamaica, you will likely disembark in Ocho Rios, a major port of call for the cruise lines. Ocho Rios is Spanish for “eight rivers”.

39. “The Sleeping Gypsy” painter : ROUSSEAU
Henri Rousseau was a French Post-Impressionist painter. He was self-taught, only starting to paint seriously in his forties. He worked as a tax collector until he was 49 years old, when he retired to focus on his art. Rousseau’s most famous painting is “The Sleeping Gypsy”, a celebrated work that depicts a lion standing beside a sleeping woman in the moonlight. You can take a look at it in New York’s Museum of Modern Art.

44. Bolshevik target : TSAR
At the second party congress of the Marxist Russian Social Democratic Labour Party in 1903, a split developed. The faction with the most support was led by Vladimir Lenin, and as they were in the majority, they became known as the Bolsheviks, derived from the Russian word for “more” or “majority”.

52. ___ Bell, witch who was a fellow student of Harry Potter at Hogwarts : KATIE
I think Katie Bell is a relatively minor character in the “Harry Potter” stories.